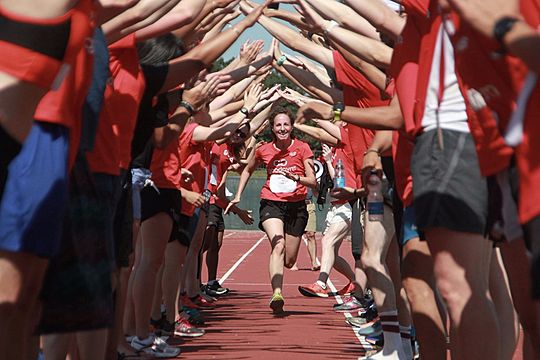 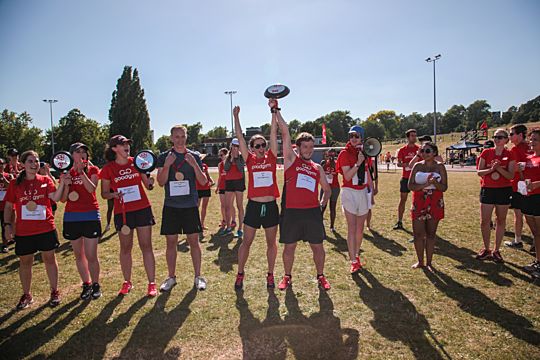 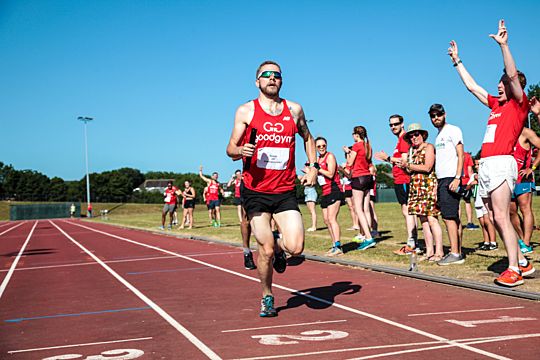 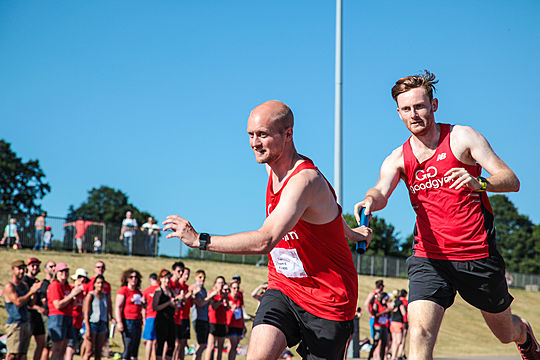 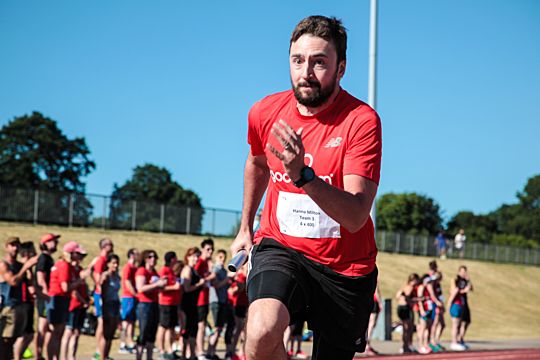 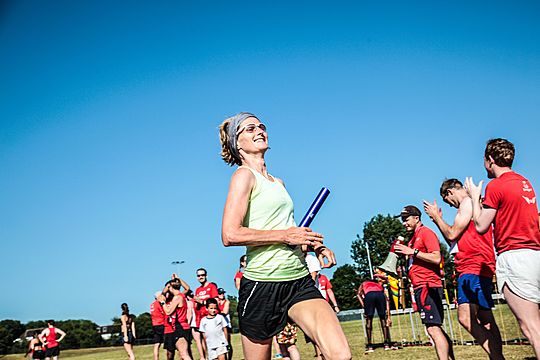 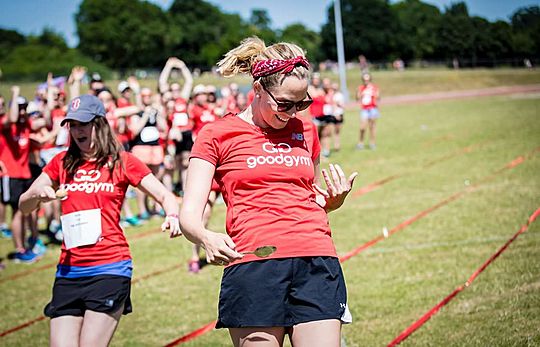 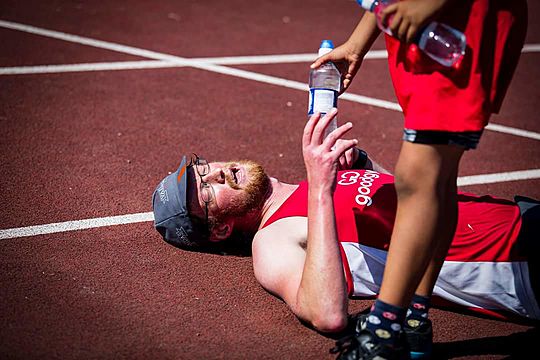 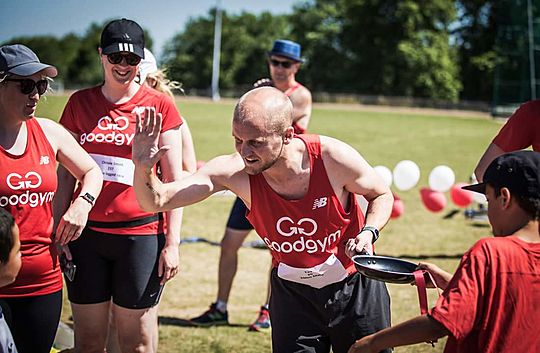 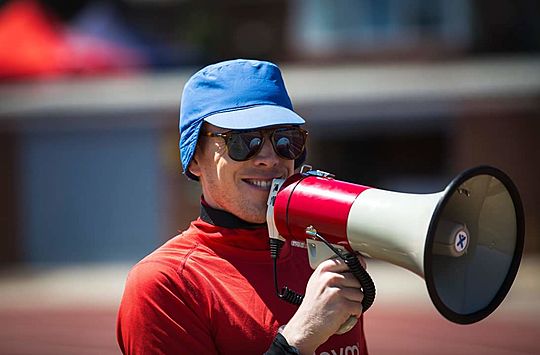 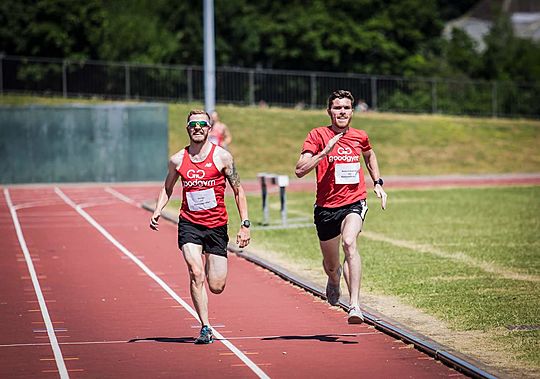 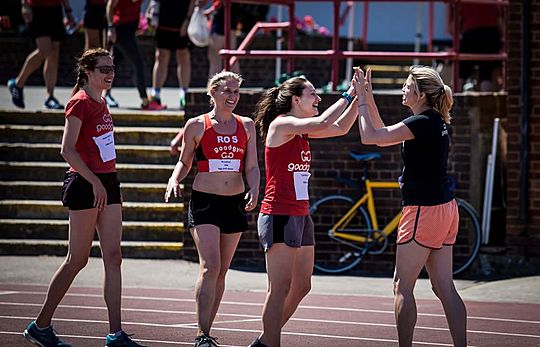 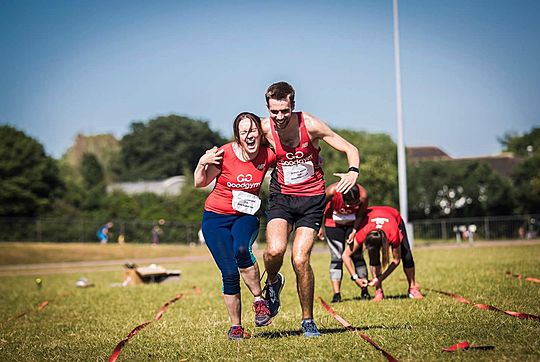 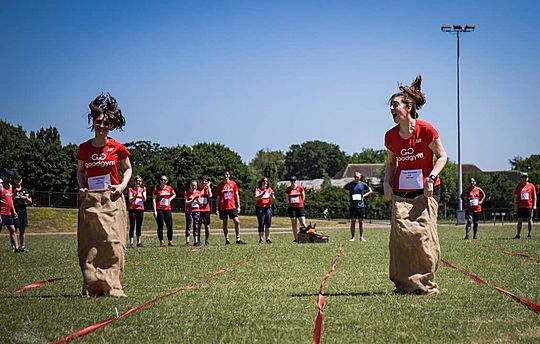 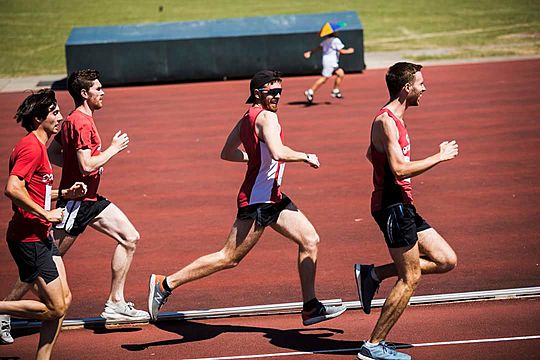 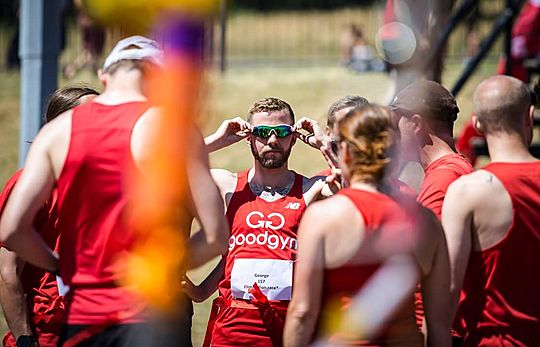 Well on June 30th 2018 many things were happening it was National Paddy Day of Nepal, Edmonton Royals beat Toronto Nationals by 8 wickets in the 20Twenty and the Nation sat down to watch Nick Knowles hosts the quiz for people who can't resist a list in another cracking episode of Who Dares Wins. Meanwhile in leafy Hampstead Heath Park dog walkers, parents and local residents were making reports of strange behaviour, incidents included lots of cheering, signs of red thunder, folks running with eggs on spoons and a sea of flags. Not only was the behaviour incredibly positive they were also plying spectators with these delicious homemade cakes, what these folks were witnessing was Olympic fever GoodGym style. So as reported, June 30th 2018 was the 2nd ever GoodGym Olympics. The day brought together 24 different GoodGym area, ranging from Lambeth, the South West to Colchester. The events on offer were a range of events varied from the egg and spoon, 400m to the elimination race. The events were varied but the competition was not and every race brought a bigger and bigger sea of cheers, particular highlights for me was the epic finish of the elimination mile between George Bright and Richard Dowling, Folks flipping pancakes, listening to our two wonderful commentators, the GoodGym relay madness, and human tunnel finish that welcomed the final 5,000m runners brought a tear to my eye that did. Not only were the runners being judged but we also had a torch parade before to show off each boroughs creative sides and although it was a fierce competition. All in all there were 18 different events which each borough their own brilliant moments. This year to even the field I placed the areas in two different leagues due to levels of runners from each area. So up for grabs was the Hunter-Sidhu Shield and the Kerry-Barnard Cup named after our two fantastic commentators, John Hunter and James Kerry-Barnard.

I could write about this for hours however I think picture would do a far better so I will leave some of Tom Hunters and Sarah Rajabalee fanatic shots up and will post a link to more when they come available.

These events don’t work without a band of helpers and I have to say a massive thanks to all the all members of taskforce and GoodGym who have gave up their time to volunteer, help time and marshal on the day and general mean that I didn’t have to do too much, it was amazing there are just too many of you to write down but again thank you it was really a truly lovely and special day, thank you all and here’s to next year. If you have any feedback please let me know on tomb@goodgym.org. I will be putting together a committee of people to help out and organise next years, if you would like to be considered please drop me a email too.

Race Results please click here on the link below. Please note we did not record heat times and some events do not have times or positions as these got put away during the tidy up. Please accept my apologies if this affects you.

Here are the rest of the results we https://docs.google.com/spreadsheets/d/1WR3tnGIEXq6ylA-JhZEduRuGKiW5SgD4alhfHJqJFWY/edit#gid=0

Here were the final results

Torch winners: Big shout out to team Islington for their Stella effort combining biscuits with a fantastic touch. Highly commended goes to Tower Hamlets, Bath and Brent. Well done everyone.

Thank you for a fantastic day Tom!

Great job Tom, that was a lot to organise!

Great job Tom organising it all and what a great day!

How do I get myself on the register for attending? I appear to be missing!

Where do i place my vote for Sir Tom ‘National Treasure’ Benson MBE?

Amazing photos for an amazing day. The human tunnel had me teary too... beautiful stuff and everything that GoodGym is about <3