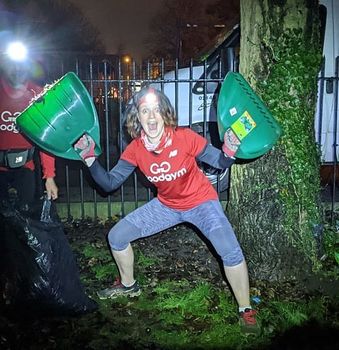 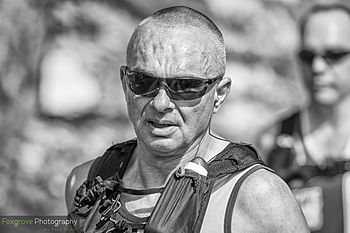 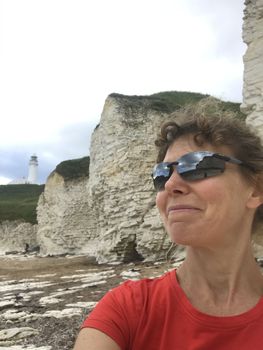 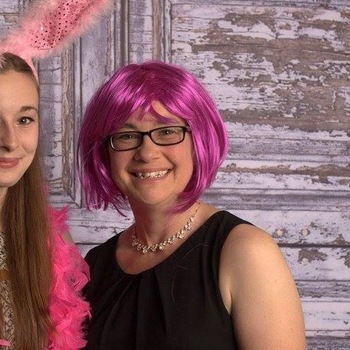 🙌 21 excellent GoodGymmers, undeterred from the recent rain shower met for our weekly group run, and were rewarded by no further rain for the evening 🌦️

👋 We were thrilled to welcome Lizzy for her first GoodGym session. We hope you had fun and would love to see you again 😁

🥳 There were celebrations aplenty for some brilliant efforts at the Vale of York half marathon on Sunday, which was Laura's first half, a PB for Ed and Nicky and excellently run by Vicky and David. Well done to everyone for getting back out on tired legs tonight 🏅

🍫 We named, numbered and warmed up while discussing our favourite chocolate bars/snacks. From dark chocolate Bounties to salted caramel Twixes and the classic Milky Way, it was an enlightening (if not mouthwatering) experience 🤤

🏃‍♀️🚲🚶 It was then time to head off to Greenfields, with running, run-walking and cycling options. We were greeted with an introduction to the space and quickly split into four teams to get to work 💪

🍓 Some people were lopping brambles while others were neatening up the compost piles. We also had a scything and raking team, giving Ivo his first experience of scything (maybe a new life skill to take back to London?!) 👨‍🌾

⏰ Time flew with the fun that was had so it was time to finish up in no time. After gathering for the obligatory symmetrical(ish) photo, we said farewell to our run-walkers. Tonight's fitness session combined the cones of joy with (two different) dice of doom and some appropriate fitness music to create something that could be adapted to the soreness levels of the legs 😴

🤩 After that, it was time to head back to base to stretch off, cool down and hear about all the exciting sessions we've got coming up, before heading to home or the pub 🍻

🙈 Sorry for the poor pun tonight, my inspiration levels were low 🤦🏼‍♀️

🙌 We were thrilled to welcome Lindsay to her first GoodGym session, and also to hear about people's exciting running adventures this weekend 👌

⛱️ We named, numbered and warmed up while disclosing our favourite beach activity. There were lots of sandcastle-builders and brave swimmers and also the odd ice cream-eater and person-burier 🍦

🥭 After a quick running warm up, we set off for Greenfields Garden. On arrival, we quickly set to work gathering plums, both from the tree and from the ground. A variety of instruments were available to do this, along with our bare (well, gloved) hands! Apparently, we picked over 57kg! Once that was done, we set to work gathering the rotten windfalls to be composted. Some of us also went hunting other produce, including courgettes/marrows (if anyone can confirm at what point a courgette becomes a marrow, that would be greatly appreciated) and some interesting (yet unidentified) squash/marrow mystery veg 🥒

📸 Once the turning composter had been turned, we posed for our highly choreographed mirror image group photo (which has to be done at this task). We did some companionable birthday squats for Barbara's birthday tomorrow before a quick Mitch-inspired fitness session of never have I ever, featuring the fitness dice of doom/fun (depending on your perspective) 🎲

🥳 Before we knew it, it was time to head back to base to stretch off, cool down and enjoy some of Barbara's very yummily gooey birthday brownies 🍫

👍 Thank you everyone, and hopefully see you again soon 😁

🌠 Credit to Mitch for the pun 💪

🌫️ 24 glorious GoodGymmers met on a mildly muggy Monday for our group run this evening, several of whom were on an impressive double good deed quest, having done a pre-group run community mission at a nearby community garden 🍈

🤓 We chatted about our bumper week coming up, with many more opportunities to get fit and do good 👌

👸🤴We named and numbered off while saying what period of history we'd have liked to have lived in, given the choice. There was much contentment with the present, dreams of the future, nostalgia for the recent past and desires to walk with dinosaurs and forage with the Romans 🦕

🏃‍♀️🏃‍♂️ Pete led the run to Greenfields Community Garden where Louise swiftly set us to work, dividing is into two groups to conquer tonight's tasks 👍

🥭 Some people were armed with litter-pickers to pick not litter (slightly confusingly - some people had already started doing just that as it appears to be an automatic conditioned response as a GoodGymmer, to start picking litter the moment a litter picker appears) but plums. A successful haul was gathered that will be distributed to the local community and food banks, with only a few disappearing (with permission) into GoodGym stomachs 😋

💪 Meanwhile, the other group were building their arm muscles moving the compost heap from one side of the garden to the other. Some people were armed with forks, shifting the compost into wheelbarrows, which were then barrowed to the new compost heaps by the barrowers. The question of why is (almost) always good to ask of a GoodGym task and Louise was able to offer multiple explanations. Firstly, it was a good opportunity to turn the compost, which is a positive thing anyway. Secondly, there has been a recent rat infestation in the nearby streets and although Louise was confident (and our work also supported) that these weren't originating from the compost heap, it was good to be able to show this and thus maintain good relationships with the neighbours 🙌 Oh, and despite the lack of rats, there was a notably huge spider uncovered, generating different emotions among nearby GoodGymmers 🕷️

🥒 When people had finished their official tasks, Louise sent some of us on some unofficial foraging (for ripe courgettes) and/or tasting (of mulberries) missions. There were some mixed reactions to mulberries but the overall verdict was probably positive and the impromptu renditions of "Here we go round the mulberry bush" made any slight tart taste bud explosions all worthwhile 🎶

🎤 At some points, this delightful nursery rhyme was the soundtrack to tonight's fitness season (once we'd remembered the words and tune). Fitness was a mash up of plank musical chairs with the addition of the fitness dice of doom for anyone not planking plus a few cones of joy activity. I'm not entirely sure if a sense of joy or doom dominated but it was hopefully a good workout at least 💪

⌚ And with that, it was time to head back to base and on to the pub for many of us 🍻

👏 Thank you for some brilliant work tonight everyone, and hopefully see you at one of our other sessions this week 🥳

☀️ 26 epic GoodGymmers gathered for a sunny Monday evening group run. After an impressive weekend of running at Swaledale and other marathons, there was lots to celebrate. And lots to plan, including a rounders social so tell us your availability here 📅

💪 Louise wasn't quite ready for us so while we tried to track down her phone number, Egg led an impromptu plank/push up fitness 💨

🌺 With our cores properly warmed up and Louise arrived, we received a quick introduction to the garden and its many community uses. We split into five groups of five and quickly got to work. There were Dalek bins to be filled, compost heaps to be rationalised, paths to be hoed, beds to be weeded, new plants to be watered and (possibly best of all) strawberries to be picked 🍓

👍 There was plenty to be done so we were kept busy until the clock said it was time for a group photo and fitness round 2. This was a musical one, to the Ghostbusters theme, involving lunges and burpees 👻

😇 And that was that, it was time to head back to CVS. Except that wasn't actually that because GoodGym York can't possibly pass up an opportunity to do a bit more good. So some of us picked up the many, many tourist leaflets that were inexplicably scattered around the bus stops and gave them in bundles to Mitch to recycle them for us, very kindly (thanks Mitch!) ♻️

🦉 And just in case anyone was interested, I saw an owl on my way home, which was a lovely way to round off a lovely evening 🌠

(Apologies for the pun, rationalising was a tricky one 🤔)

☀️19 optimistic GoodGymmers met on a sunny Monday evening, generally pretty confident that the rain had passed for the day (more on that later) 🥳

🌤️We headed off into the sunshine towards Greenfields Garden. On arrival, the eagle-eyed among us spotted a very dark cloud on the horizon. Some of us remained optimistic that it would wait until after our session to deposit its rain 🤞

🌱Continuing this optimism, we split into three groups and set to work. One group were on compost bin duties, another group were working on the big green pile (featuring some joyous jumping by Amy) while the final group dug/scraped weeds off paths to be woodchipped 🌿

🌧️Despite (or maybe because of) our optimism, the rain fell. And it didn't just rain, it poured. Some of us were prepared with coats/jumpers/waterproof hats (Paul Kelly) while others just got very wet. Despite the slight (and very literal) dampener, we cracked on and worked through the short(ish) and (very) sharp shower ☔

💪When the compost and green pile group had finished, Louise from the garden decided she'd really like the woodchip spreading on the cleared paths this evening. So we all joined in to make that happen. There was scraping, digging and barrowing galore and soon, the woodchip was moved and spread to make some lovely new paths 🌟

🏃‍♀️🏃‍♂️That left time for a quick (and ever-so-slightly competitive) fitness game before we jogged back and stretched together. We then parted ways, heading home or to the pub to dry our soggy bottoms 🍻☕

🦸‍♀️🦸‍♂️We started off congratulating Cara for her impressive 100 good deeds. She got to "wear" the red cape of glory (aka tie it round her waist - good decision in the heat). We discussed the highlights of our weekends, which included ceramics-painting, racing and Go Ape. We also cheered Nikki G in her absence (hopefully having a well-earned rest) for a marathon PB today 👌

🥳Dom and Abby led a party peace crew tonight and a huge shout out needs to go to Claire for running her furthest distance tonight (next stop parkrun?) Amazing stuff 💪

🌳On arrival at Greenfields, we were split into four groups - brambling, lopping, digging and planting 🌺

🌱The bramble crew were digging up some hefty brambles, including some impressive-looking roots. Meanwhile, the loppers lopped. Willow, to be precise. The diggers were lifting wildflower plants from one area. Then the planters were planting them in a new patch, after removing the protective covering and unveiling an army of woodlice. A dead rat was also lurking nearby, hence the pun🐀

🧺After our allocated time, we regrouped and surveyed our work. As a reward, we were allowed to hunt the remaining chocolate eggs that were left from a children's Easter egg hunt. Some people found many (and kindly shared them) while some found none but fun (and competitive spirit) abounded 🕵️‍♂️🕵️‍♀️

🎶Speaking of competitive spirit, that was on show aplenty during our musical planks fitness. We ran and when the music stopped, we planked by a cone. Unless there wasn't a cone, in which case you were out. That competitive spirit really shone through from Ben who was the last one standing (planking) after some impressive running (and diving) into plank position 👏

🏃‍♀️🏃‍♂️After all that fun, we headed back to base for stretching and wishing of luck to everyone racing at Burnsall this weekend 🤞