13 runners ran have an amazing time in Portsmouth. 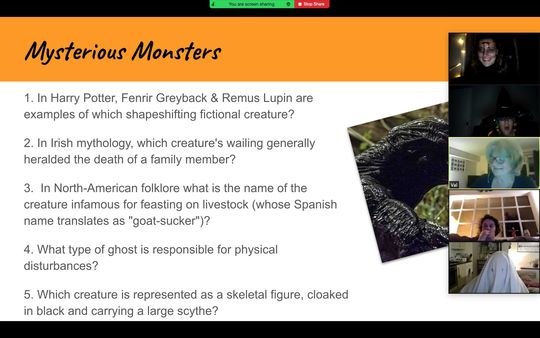 Tonight, an unlucky number of spooky GoodGymers (13!) frightened each other on zoom and pondered over a variety of eerie and sinister halloween questions.

It's sneeky Louisa in a scream mask! We were also spooked by a ghostly Lynn (did someone say "oh sheet!") and a ghostly Sarah - lit up by her jack-o-lantern. Though it's a toss up between Sarah's skull and Katie for scariest pumpkin!

Sam & Catherine shocked us with their ghastly dos, hollowed features and splattered blood - Dr Jo told us she was frightful enough and left her scrubs at work! Nick flickered in the shadows with his menacing evil laughter and Jen channelled her inner Mia while Val started talking to her imaginary friends.

Judy admitted to being a witch for the last 15+ years (does she use a broom or is she a modern witch with a hoover? That is the real question) and Jo North admitted to being the halloween equivalent to a bah humbug which Catherine responded to with booooo ;) get it? All the while I had a major head ache from my head injury - clearly freaked out from organising a scary quiz!

We're all still unsure whether Catherine was actually naked, but no one minded - it was just her crunchy chickpeas that had the hoards calling for a mute button! And over the course of the quiz, our ghosts and screams realised their hot predicament and showed us their true faces (which were more frightening??)

We covered eerie entertainment, sinister sounds, ghostly general knowledge, weird witches, mysterious monsters and the pre quiz teaser of abnormal anagrams! Which helped Val get to 3rd place as she got 10/10 on the anagrams!

The top 3 were all super close, mere halfs between points! Catherine snatched 2nd place from Val with 31 1/2 but Lynn took the glory with 32/45! Judy said her prize would be to run around naked at the witching hour of Halloween - watch out for werewolves Lynn, as we all now know it'll be a full moon!

Once the quiz was finished we shared our possible halloween plans, Sam telling us it is B's 2nd favorite holiday and all about their halloween spread, while Jen said "it" becomes demented on candy - referring to Alice, who clearly has an evil alter ego when on a sugar high! Somehow the conversation diverged into hair dresses but hey that's GoodGym for you, we can talk for hours about everything and anything :)

Also special thanks to Katie for taking some screenshots as I stupidly didn't save the ones I took somehow! Must be the head wound.. anyways Happy Halloween!

Brilliant report Maxine... Had a good chuckle over my morning cuppa 👻