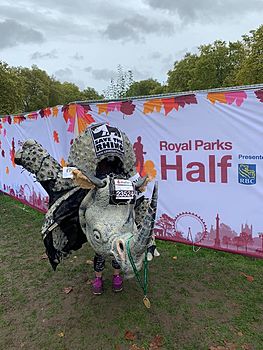 Picking up the scraps

Monday morning felt like the beginning of Autumn as the morning was noticeably cooler. The litter picking regulars Ceiling, Richard and Paulin quickly settled into the usual routine.

This morning we also welcomed Allie. Whilst Allie was new to this series of litter picks at Burgess Park, it turned out that she was a litter picking expert! In particular, she introduced us to an app, Planet Patrol. It is used to collect logs the types of litter that are found from litter picks across the world. Then, this data gets used for researchers and used as evidence to help tackle the problem. We'll try to use it on our next litter pick on Thursday!

Kick-off the week with an early morning good deed! We'll be joining Friends of Burgess Park with their weekly litter pick, "Litter-free Mondays".

Gloves and litter pickers provided or bring your own. It is advised to wear long sleeves and long trousers.

Susan from Friends of Burgess Park will meet us at the picnic benches by Chumleigh Gardens. This meeting point is usually marked by a big green banner.

As things are opening up after lockdown, GoodGym have been invited back to Surrey Docks Farm.

They haven't had much help over the last few months, so there is plenty to do.

There will be sessions every Sunday afternoon between 26 July and 16 August (at least).

Hope you can join us and say hello to the pigs, goats and cows again!

Helping out at Surrey Docks Farm!

As things are opening up after lockdown, GoodGym have been invited back to Surrey Docks Farm.

They haven't had much help over the last few months, so there is plenty to do.

There will be sessions every Sunday afternoon between 26 July and 16 August (at least).

Hope you can join us and say hello to the pigs, goats and cows again!

6 of us met at Age Uk to help clear their garden today. It's normally a day centre and the garden is used by its visitors for growing veg and flowers and as a nice place to sit. But since lockdown no one has been able to tend to the weeds and they have got a bit out of hand. . The 6 of us pulled out weeds, chopped back hedges, strimmed the lawn and waters the plants. We even harvested a couple of potatoes by mistake. . It was a boiling afternoon and after an hour we all felt like baked potatoes but the garden was looking a lot better!

Age UK Lewisham & Southwark's day centre in Bermondsey may not be in use by older folk at the moment, but the staff are still there, working hard to make sure older people feel supported at this time.

We were there a couple of weeks ago but we need at least another session to make it look even nicer.

You will meet Caroline - she heads up Food2You which some of you may have flyered for - and she will have all the tools and space you need to keep socially distanced.

Any questions? Shoot me an email @ markgilyead@goodgym.org

Allie has done their first race with GoodGym. Performing on the day is a lot of pressure; Allie's dealt with the nerves and turned up on the day to make it happen.

Allie went on a race
Race

Well that was something else, as the clock ticked down to 7pm I won’t lie I was a little nervous however as soon as I pressed live (and it worked, this has not always happened in practice) we were off.

So after all the prep it was show time, Saturday night, after a whirlwind 2 months from thinking it up, it went live and I have to say what a fun experience it was.

Please note, Chris has done a super job of updating the website which features all the events, all the area videos and if you fancy watching the whole thing again, bingo it’s there.

So in total 29 areas got involved sending in clips of their finest duvet making, tin stacking, shoe putting on, tin blowing, boat wafting, planking and jumping clips it was something else, we even had a virtual elimination 5km race, which if I don’t mind typing was extremely tense. I was bowled over by the level of entries, not only that but we also were sent loads of different area videos which feature a bit about what some of the GoodGym areas have been getting up to during these times. We even got the marching band back together to play the GoodGym Games Anthem.

All in all it was wonderful, from the commentators who provided such good commentary throughout to the participants who just got involved. I was delighted to see so many watched throughout and loved reading the comments, the aim for organising these types of things is to hopefully bring members of the community together as I think we have so many different and wonderful characters.

The overall winners of the two trophies up for grabs were GoodGym Lambeth taking the Kerry-Barnard Cup and GoodGym Haringey taking the Hunter-Sidhu Shield on the last event.

Not only did we have that going on, my inbox was full of delicious bakes and carefully crafted veg/fruit. I think the standard just keeps going up a notch through sourdough loafs to delicious cupcakes, however the winner this year in the public vote was Imogen with her winning baking creation "3 We're all having a good lime (cake)"

Craving it up on the veg side was a wonderful creation named "The Eye Test" curated by Andrea Lo. Both I’m sure we can agree were outstanding. Please see their winning creations on Here

Please note more photos from the entries will be added in the coming days.

I also do want to thank the GoodGym Games committee who have been wonderful to work with, I brought this idea to the table when the GoodGym in Oxford was postponed and together we made it into last nights show, they are deserves a massive cheer, with special mention to Mark Gilyead, who had edited more clips than I would like to say, thank you.

Here's a video for all the team: video

Allie has completed their 15th good deed with GoodGym

Helping out at Surrey Docks Farm!