Lofts of fun tonight...the task was done in a flash except for one task which we had to shelve for next time!

18 runners ran 4.0km to help the Samye Mindfulness and Well being Centre in Cardiff. 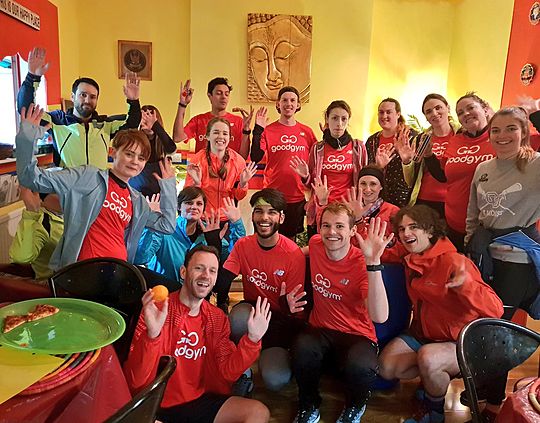 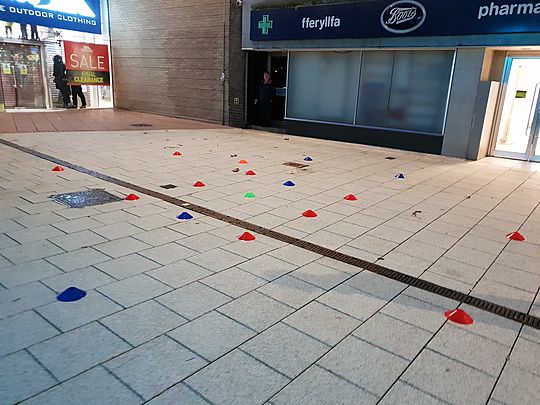 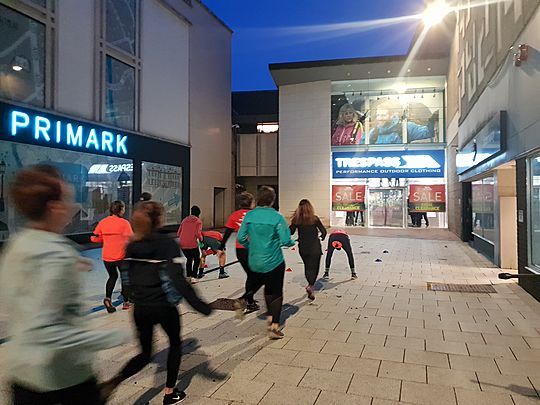 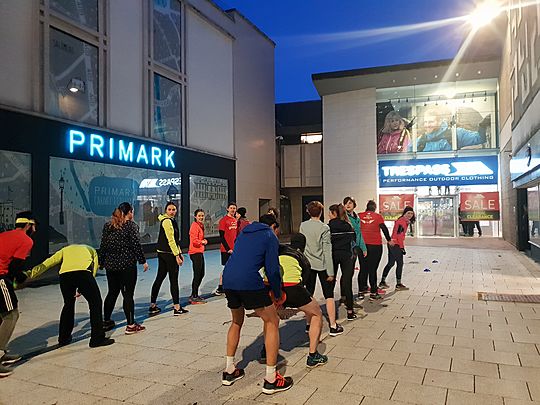 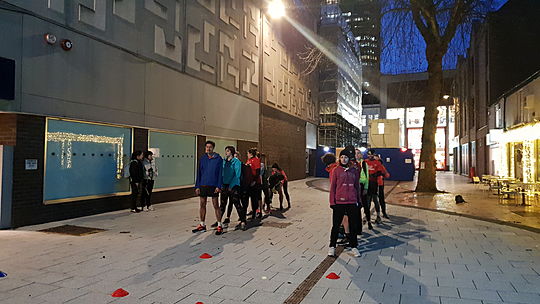 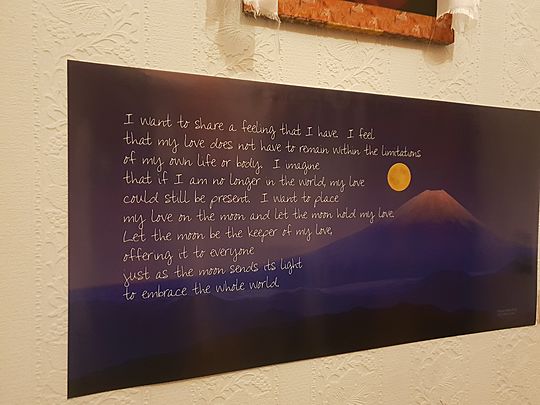 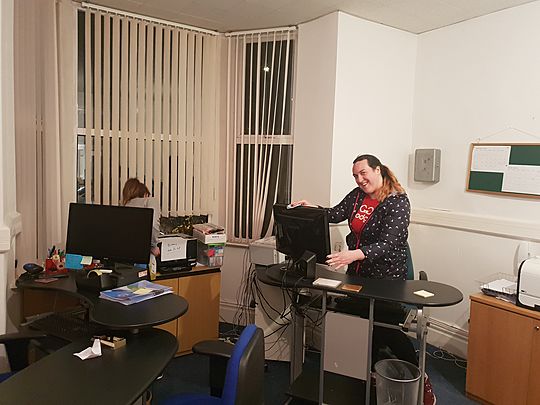 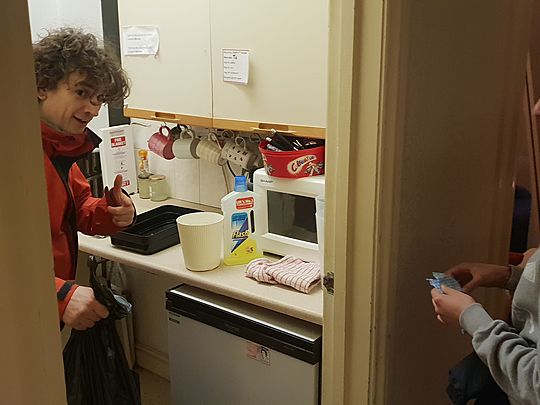 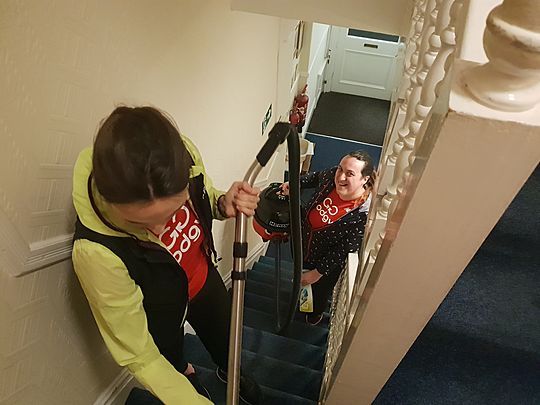 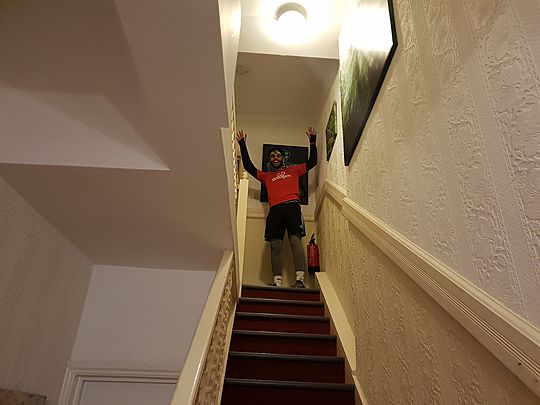 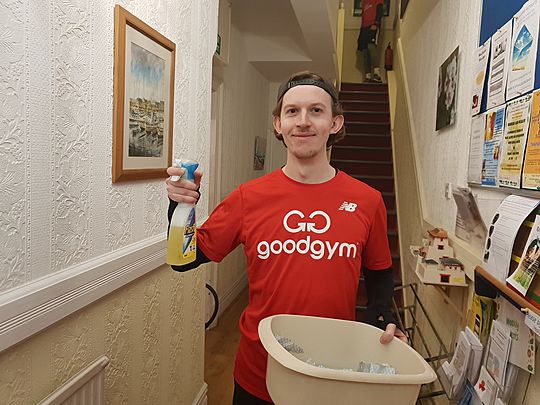 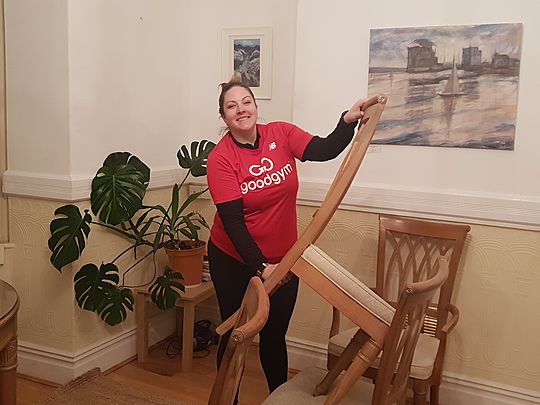 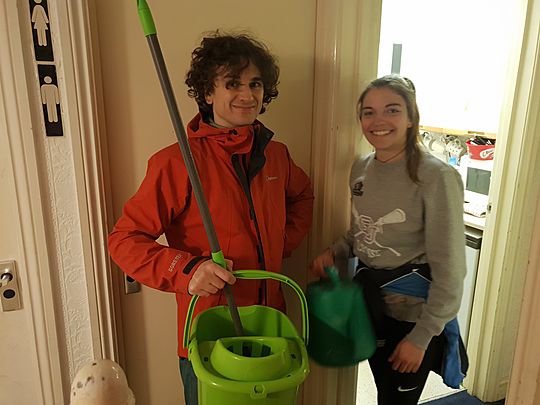 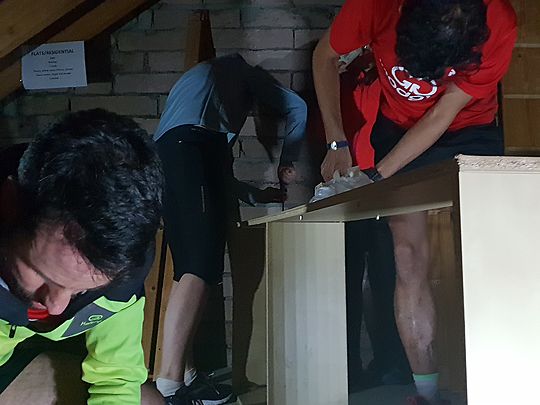 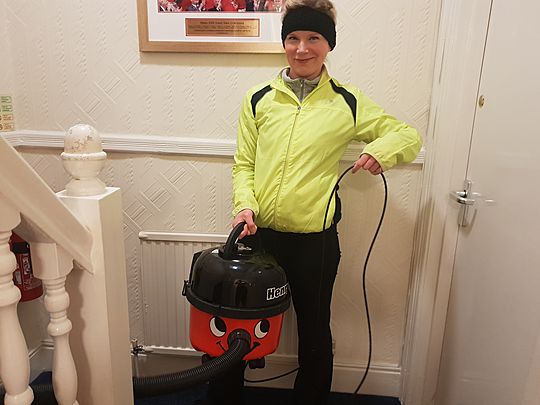 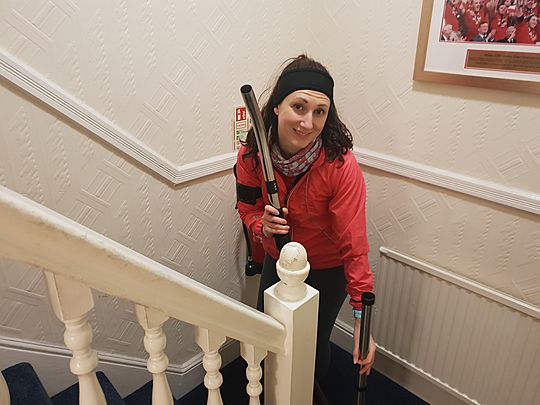 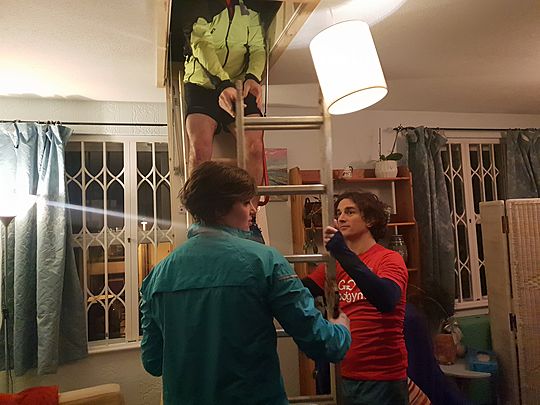 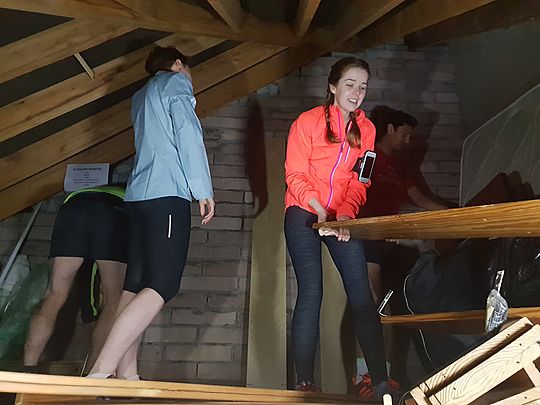 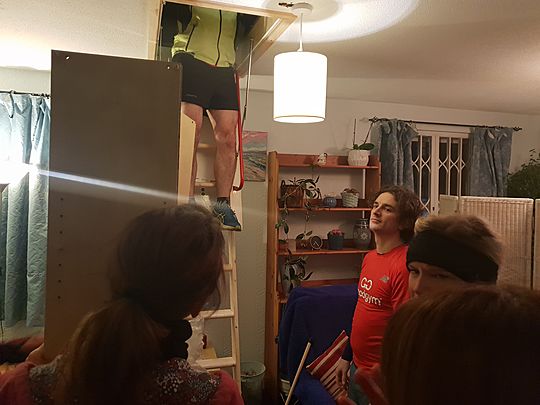 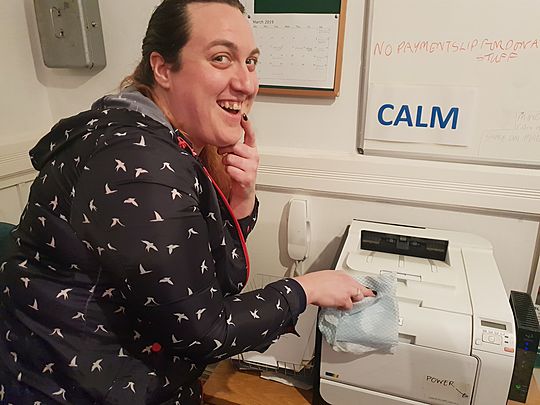 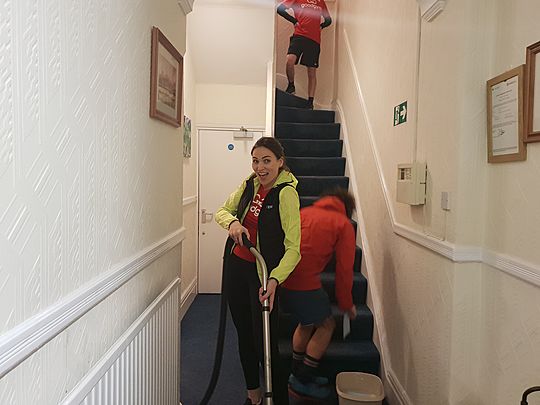 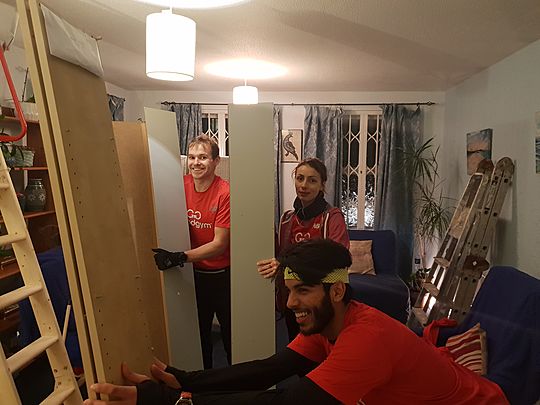 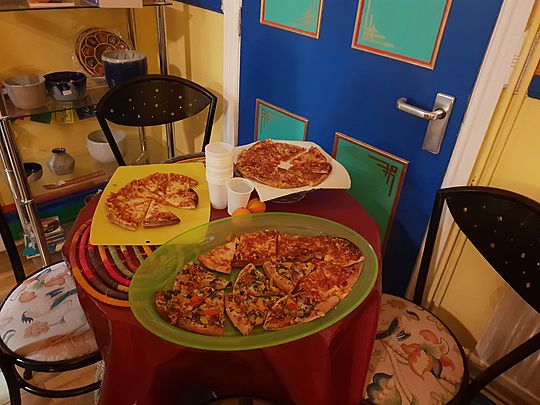 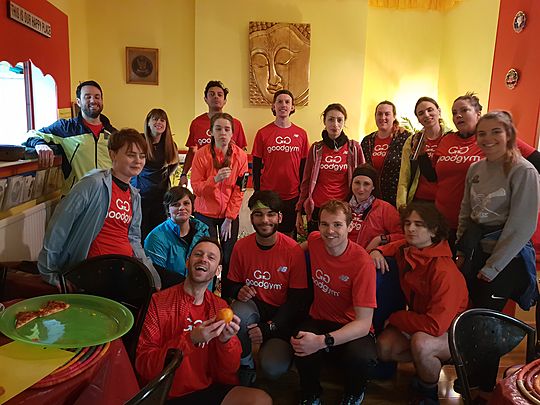 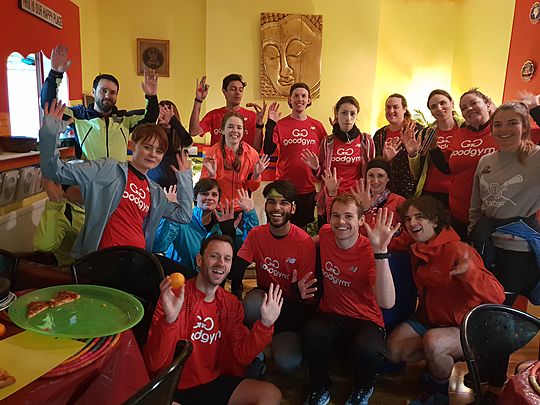 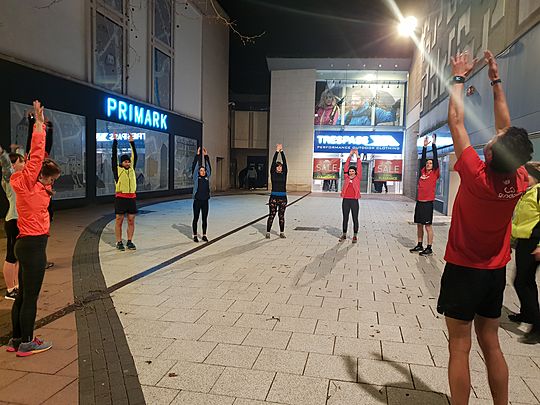 Storm Gareth was no match for GoodGym Cardiff tonight as 18 runners took to the streets to do good in the community... Many runners not attending tonight to instead watch the MPs vote on Theresa May's Brexit deal on live TV

GoodGym is the best way to get fit in Cardiff FACT and so everyone who attended GoodGym this evening made the best decision - I applaud you on your decision! It was so nice to see Mali return to GoodGym for her 2nd GG run too! :) Our GoodGym family is certainly growing. A huge well done to Nathan, Ellen, Peter and Lucy who all took part in races over the weekend. Kudos to all you parkrunners too. And not to forget, a MASSIVE penblwydd hapus to Big Moose Cafe too - They opened 1 year ago today :)

Warm up - Let's get those legs pumping

Before running to help the Samye Foundation it was important to limber ourselves up... and what better way is there to warm up than by doing some warm up games!

It was now time to get our run on! Adam and Mikey led the group run as Ben (Sir Limp-a-lot) led the walking group! The walking group comprised of Ben and Charlotte and the rest displayed some fierce running form as they ran to the Samye Foundation

Welcome to the Samye Foundation everyone!

Lorraine greeted runners to the Samye Foundation. She welcomed everyone in and offered them water to rehydrate. When everyone had arrived to the centre, Lorraine said How about a spot of mindfulness? Runners were then led up to the Shrine room AKA the top of Everest because of the amount of stairs one has to climb to reach it.

Feeling mindful, revitalised, present and self aware, it was now time to increase heart rates once again and get stuck into the evening's task.

Love a good clean we do - and clean we shall! Armed with mops, flash, polish, hoovers and a whole array of cleaning products the dirt didn't stand a chance. Lucy volunteered to hoover the moment she heard of the opportunity, she is a sucker for hoovering. BANG and the dirt was gone.

Lowri was getting stuck into task 2, building shelves in he loft... She would have definitely won a game of hide and seek. As soon as she heard of the task to build shelves in the loft she wasn't seen for 20 minutes!

Aimee undertook the challenge of Task 4, singlehandedly polishing 6 chairs... polishing off the task to perfection - "Don't chair think my chairs are impressive Ben?" Aimee said whilst presenting the now shining chairs for all to see!

Mikey took photos of everyone getting stuck into the tasks - In his element!

Thank you so much GoodGym Cardiff - You are incredible!

Lorraine was so thankful that we were able to run to the Samye Foundation and help with tasks that usually take hours and hours to do which me managed to do in 25 minutes. Never wanting to have us leave on an empty stomache, the Samye Foundation kindly gave us some slices of pizza before we ran back to Big Moose. We thanked Samye for giving us a #ReasonToRun too!

Well done to Lucy who won the Tweet off - You are getting quite good at this aren't you? Who will be next week's tweet off champion! REMEMBER! The Tweet off podium winner at the end of the year will get a limited edition certificate! Nathan Swain has said that his name should already be written on the certificate - fighting talk!... the competition for tweet off champion 2019 has officially begun! - Nabeel... you've gone quiet on the Tweet off front... I am wondering if you can win it again?!

Don't forget - Bring a friend to GoodGym and get yourself a FREE red lace! - Until stocks last

Benjamin Annear
Hello, i'm Ben! I'm the trainer of GoodGym Cardiff! Please get in touch with any questions and click support to follow updates.