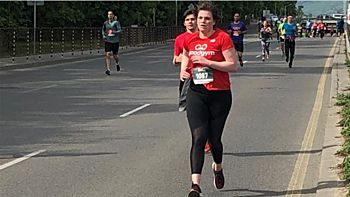 Our one and only Camilla from StarGarAllot has been tasked with bringing the star hub garden space back to life.

It's going to be used for a children's space. More info to come

Sun 22 Aug 10:00 am
Map
Penylan Library and Community Centre, 70C Pen-Y-Lan Rd, Cardiff, CF23 5HW
Sign up now
A chance to run at a social pace and catch up with GGC&V members

You can run / jog / walk the 5k route at a pace you feel comfortable whilst chatting.

Or if you're feeling a bit speedy you can add on some extra kms around the parks.

A litter pick will also be scheduled following the run (optional)

We travelled through the heat, to get to our Oasis

The long anticipated RETURN of the GROUP missions.

After 16 months of waiting patiently it was time to welcome back the groups, in one of our new outside locations at Sport Wales National Arena. With the Heat belting down, it was the shade for us, so Michael met 11 avid goodgymers ready to take on the challenge of making their way through the sweating streets of Cardiff.

Today was not a day for pre run games as we wanted to survive the run, so we split into our two groups the walk / joggers and the runners and made our way. As we ran, we surveyed the area ahead of us for any kind of shade as we meandered to our task through the streets radiating even more heat.

We arrived at our task, and what a joy it was to behold. There was a large shaded gazeebo with chairs, ready to rest our weary legs. A few of us had spent the weekend running at a race in Dorset - The Cider Frolic, so a quick rest was very much welcomed. Once the second group arrived it was time to get to work.......

Today's Task
Water the plants, at the base so as not to burn the leaves.
Cut back an overgrown Ivy, to gain access to the outside stairs.
Litter pick any rubbish also in the vegetation.
Chat to each and every one of the groups.
Enjoy the return of group tasks.
Decide if you are joining the group for a drink after the return trip.
Okay, so the last three were not really task related, but equally important on our first group back I feel.

Before we knew it, our time at Oasis was coming to an end, but just enough left to wander with our resident goodgymer Karolina who looks after the space in her spare time, and to hear about the work that had gone on plus the food they had already grown and used in the kitchens. And of course, ending with our Group Photo.

We mixed up the running pairs on the return trip and continued to talk about what we had been up to, any training that we were doing and how life was feeling for us at the moment. As BT would say.........'It's good to talk'.

With a quick stretch to cool down, we said our goodbyes to those not going to the pub and then made our way for even more chatting and catching up.

Sophie Hastings signed up to a group run
Group run

Welcome back GROUP runs - brought to you by OASIS

Oasis is a great charity that offers a warm Welsh welcome to refugees and asylum seekers.
Last year we were able to complete a community mission there to help create a growing space,
now for our FIRST GROUP run in a very long time we will be returning to see how it has grown.

We will be watering, weeding and doing some general tidying up so that the space can be enjoyed.

Get signed up and join us in celebrating the glorious return of the GROUPS.

Sowing the seeds of love

Has it really been a week already?

A return to Global Gardens, straight in with some watering in the polytunnel and the pumpkin patch.

It was a very hot evening and about to get even hotter as we got gloved up, and made our way to the hazel patch. Just before we went we spotted last week's patch that was sown and already the seeds had sprouted.

We were all too familiar with the patch, we had already cleared the brambles from around the hazel trees on our last visit. Today we were going to dig around the trees, turning the soil ready for more seeds to be sown. Hopefully the new lawn will stop the brambles and bind weed whilst the hazel trees mark the boundaries for the site.

There was also some ivy taking over a back wall in the site that needed removing so we took to that too.

So much chatting, what current training are people doing, the upcoming camping and race away this weekend in Dorset and where we grew up.

The work was sweltering with the sun directly in front of us, once the sweaty hour was up it was time for our photo, but not before noticing Nicholas with war paint all over his face from the dirt, his response was classic

I must have been the only one working…..

Welcome back GROUP runs - brought to you by OASIS