17 runners ran 10.0km to help the National Trust in Swindon. 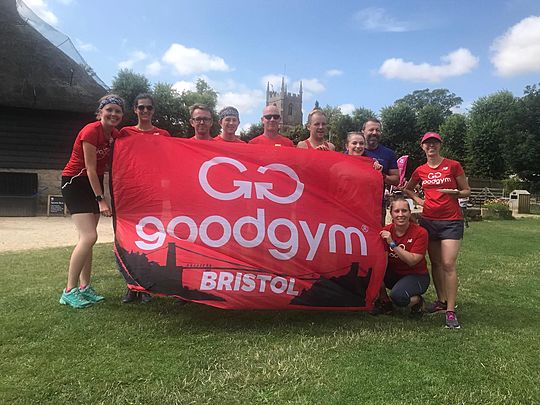 A super sunny summer Sunday morning, GoodGymers from Bath, Bristol, Oxford and Swindon coming together to run the Avebury Trust 10.

Trust 10’s are free 10Km runs in National Trust venues, held on the 4th Sunday each month from April to October.

Was great to see Alice, Darren, Martha, Matt and Zdeni from Bristol, Alison from Bath and Anwen from Oxford join Swindon regulars Sam, Kirsty, Adam, Simon, Andrew, Rhoda, Clare, Cath,Alethia and the National Trusts own Mike for a scenic run around Avebury.

All runners signed in then gathered for the pre run briefing. The Avebury Trust 10 run starts a ‘stones throw’ from, well, the stones and follows rough track trails out into the Wiltshire countryside. Soon it was time to rock and roll and get going!

It was not long before we were climbing up and descending down the rolling hills. If the run wasn’t breath taking enough, the views at the top certainly were! This was a day for enjoying the weather and the views more than concentrating on achieving times!

Just over half way and we came across the big one! A steep hill which seemed to go on forever! We were all glad when greeted by enthusiastic cheering from Tracey and Jason near the top. The run down the hill was hair raising, it would have been, if I had any! If anyone managed voiding running head first into the bushes, it wasn’t long before we were on tarmac and running towards Silbury Hill. Stone me, if Tracey and Jason popped up again on the final run into the finish, where the lure of National Trust Coffee and cake dragged us over the line.

Everyone did a fantastic job running in the heat and up those uneven climbs and certainly deserved the post run refreshments.

We ‘rocked’ up for the obligatory landscape and portrait photoshoot before ‘rock’ing and rolling home.

The next 'GoodGym West' gathering will be on Sunday 18th August; something not to be missed! Check it out HERE! and then it will be the most amazing half marathon EVER...in scenic Swindon! For more details - click HERE!

Sorry I couldn't be there; it looks like you all had a fab time! Glad I didn't have to climb that hill though! Looking forward to seeing you all soon!

Fab report! Sorry to have missed it ...what a great GG family turnout!

Great report, lovely to see you all!

Great report Simon. So wish I could have run with you all. But we did enjoy surprising you at the top of the hill!!! Hopefully next month when my old knees are fully recovered :)