13 runners ran have an amazing time in Norwich. 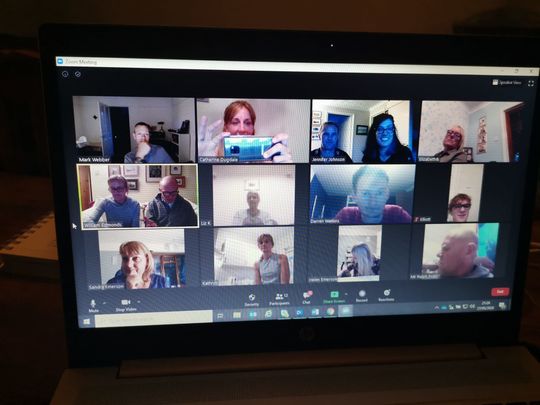 This is on behalf of Catherine Dugdale.

Last night saw the turn of Catherine to host our weekly quiz. After a good catch up and some bird song from Andy's mic, we began with a round on animals where we were very impressed by the hippo with its red sweat! Darren later taught us that they also have pink wee! Next round was cartoons and Elizabeth scored maximum points, remembering all of the names of the seven dwarves.

Then on to something different-- an isolation scavenger hunt. First back with their made item, metal thing, CD, snack and toilet roll were Jenny and Andy, quickly followed by the others except Andy who was debating over his favourite CD.

The picture round was a little logo quiz and then some lyrics from some very famous songs. But isn't it annoying when you recognise them but can't get the tune!

To finish, we had a little round of who can shove the most stuff down their trousers in 30 seconds. Helen stormed this with 30 items down her trousers including a pen knife and some matches!

With an overall score of 61, Helen takes the crown this week. Thank you everyone for being such good sports.

Great evening, as always, so good to catch up ❤️