Did all that lifting make Ewart? 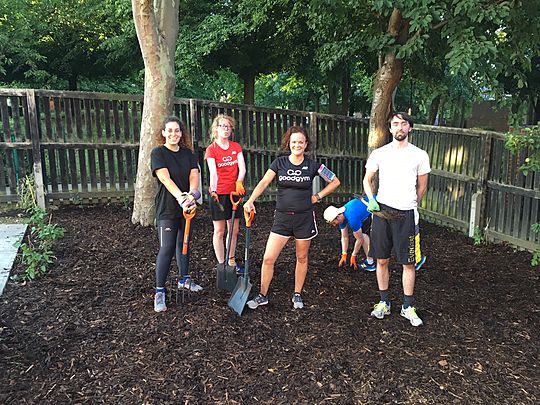 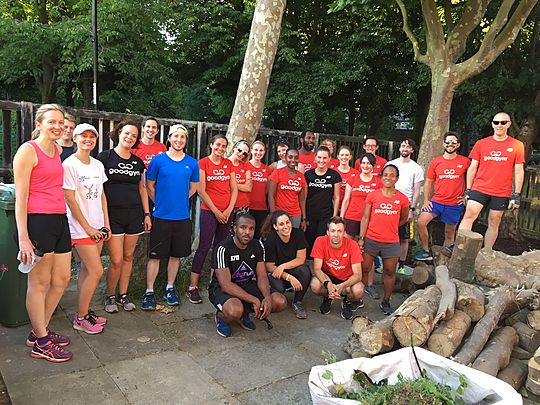 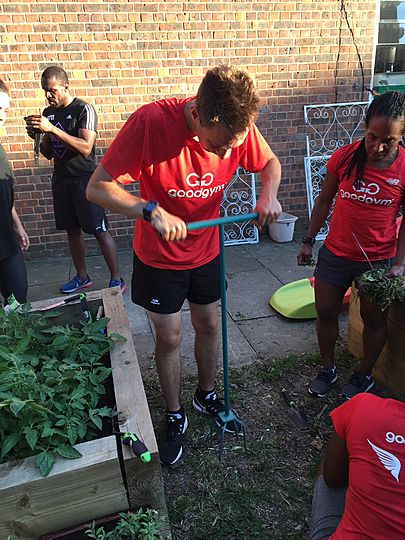 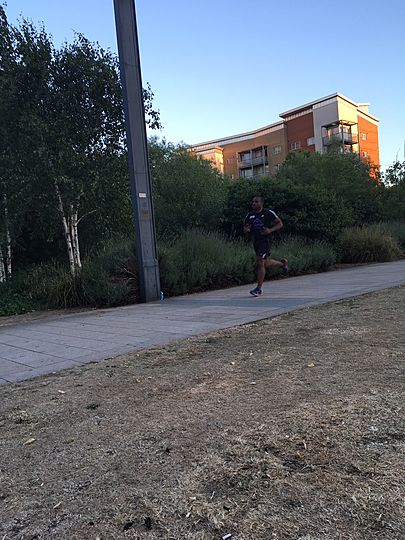 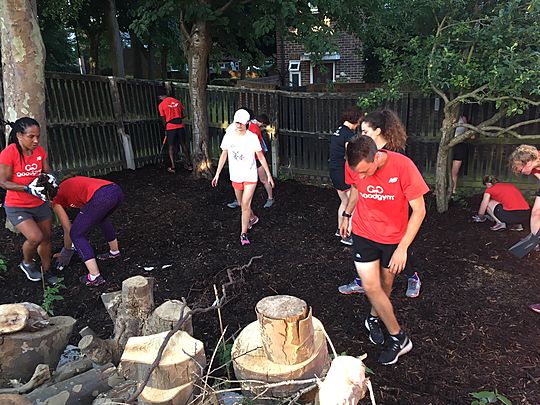 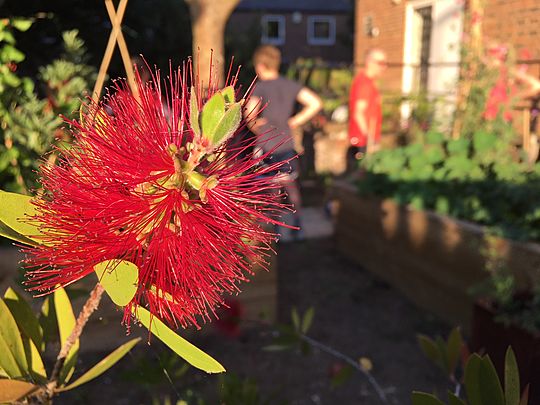 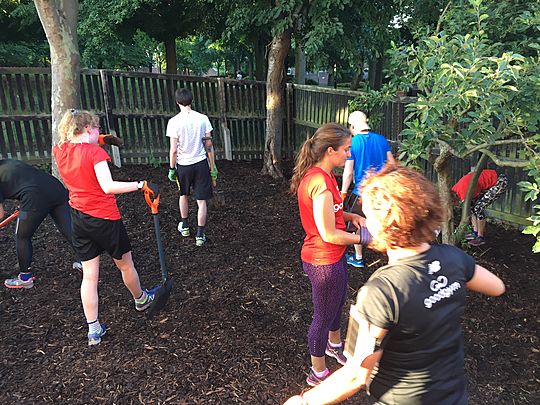 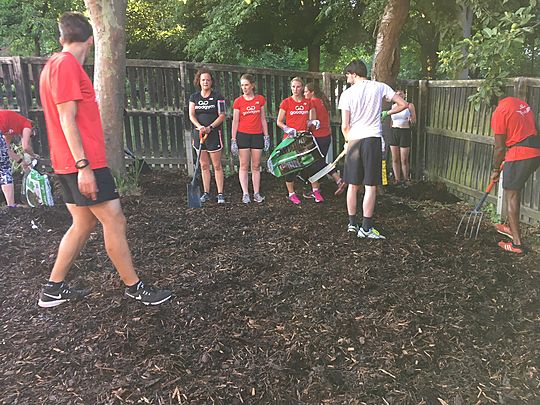 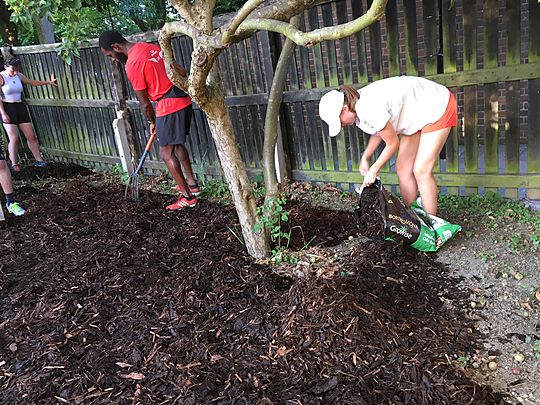 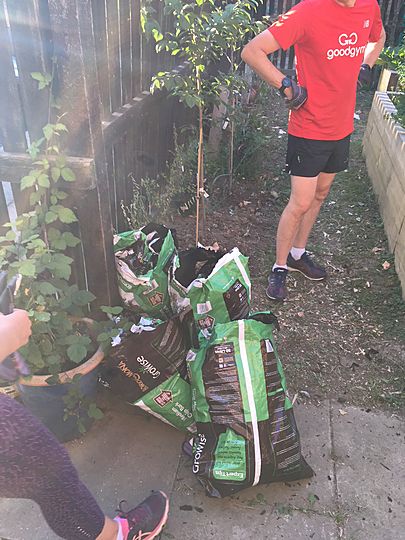 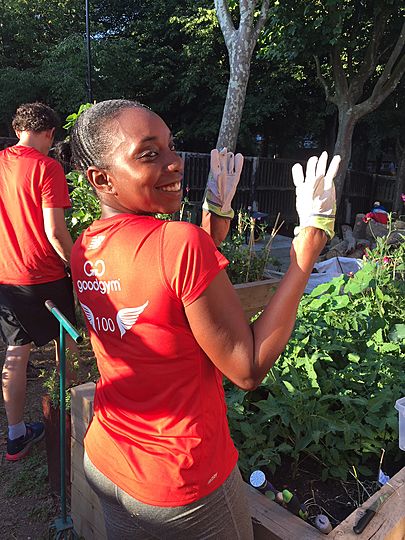 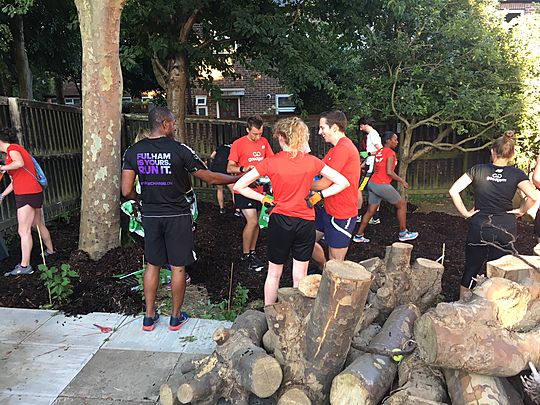 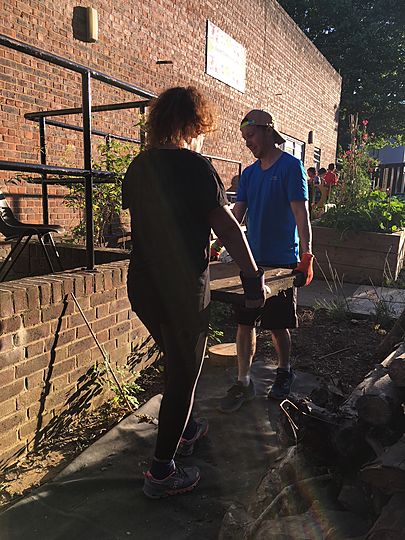 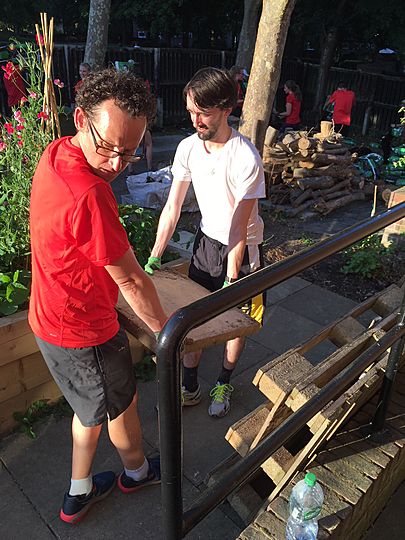 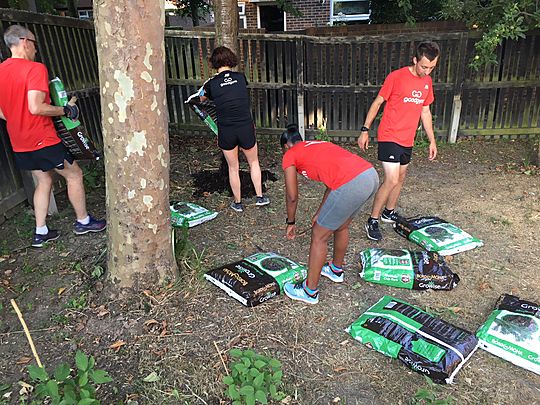 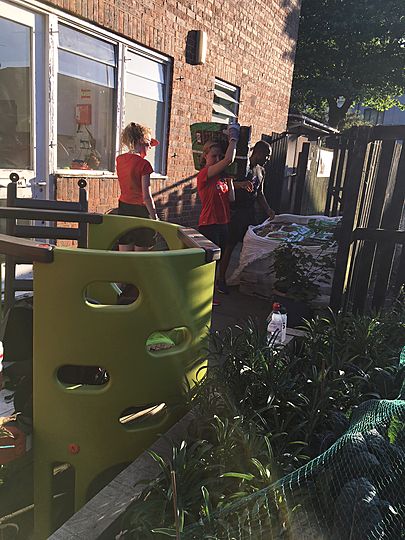 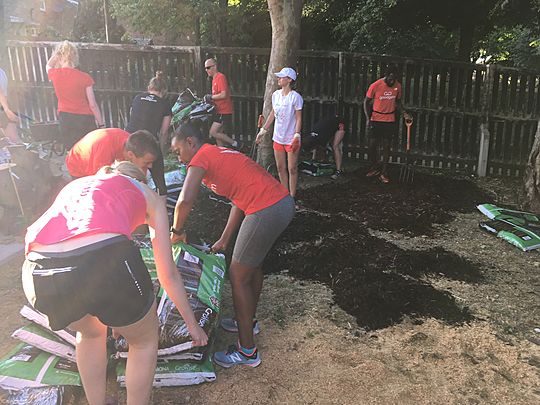 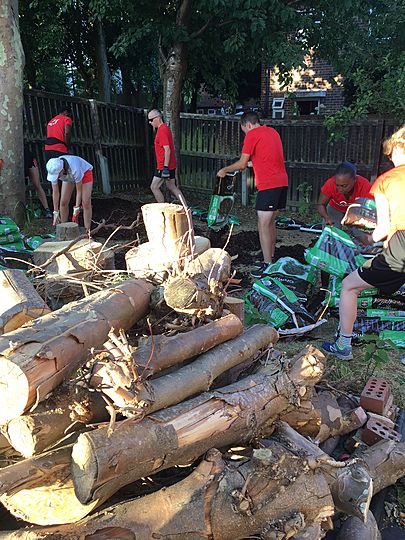 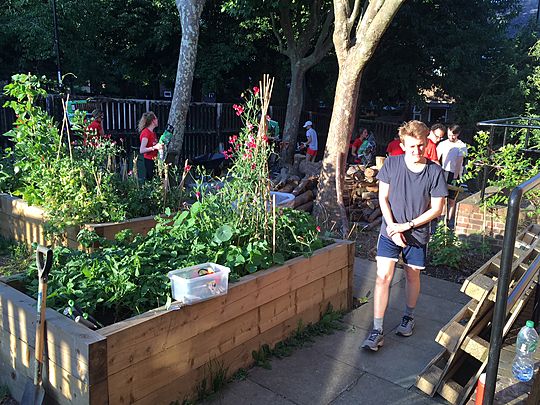 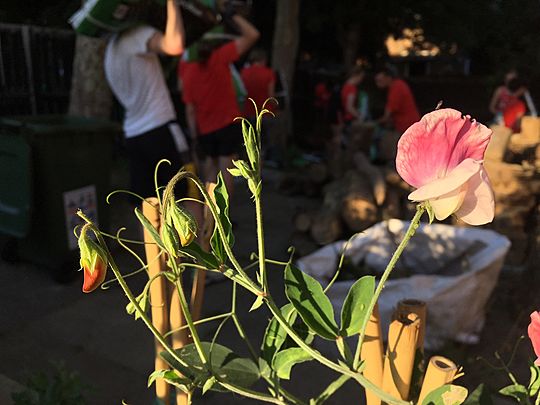 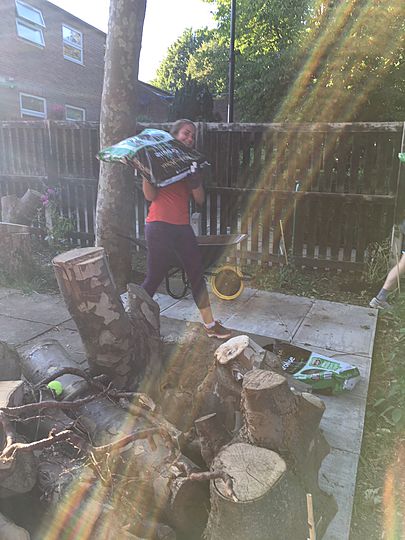 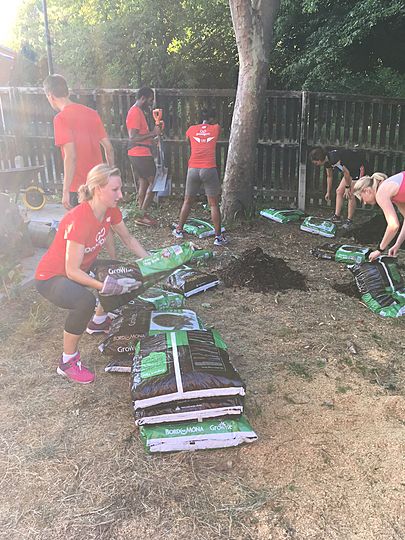 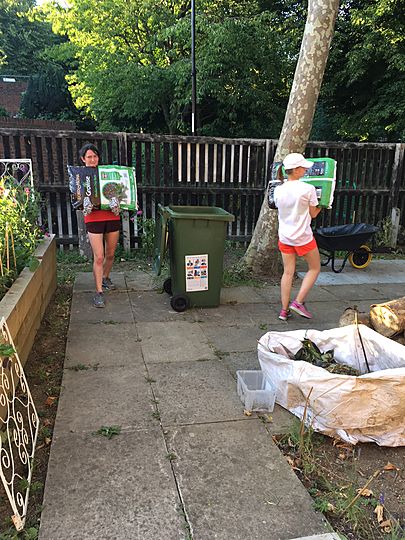 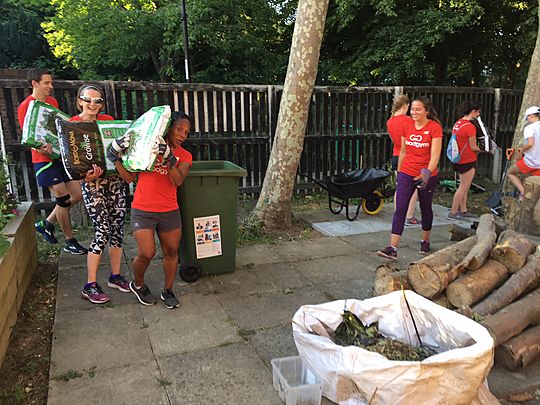 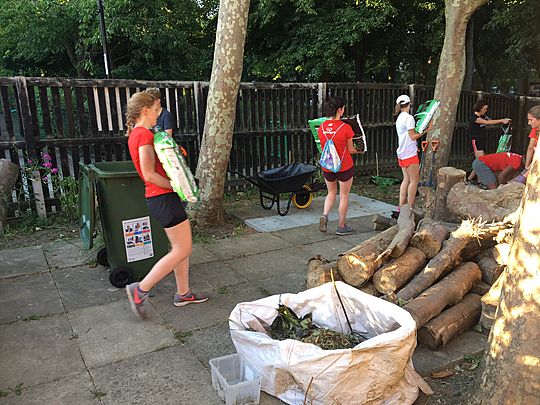 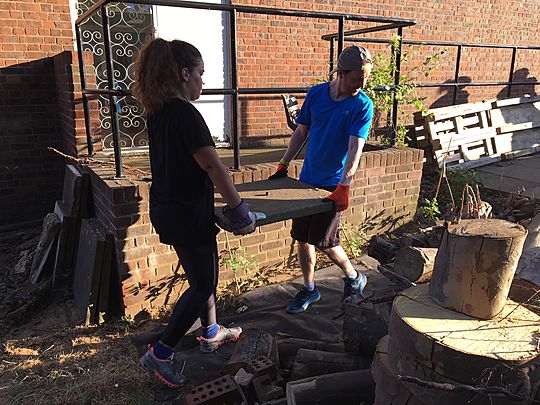 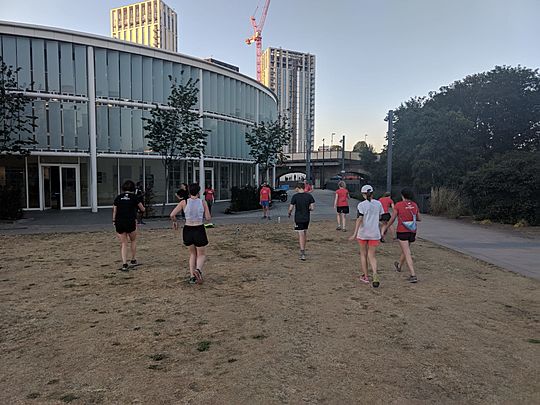 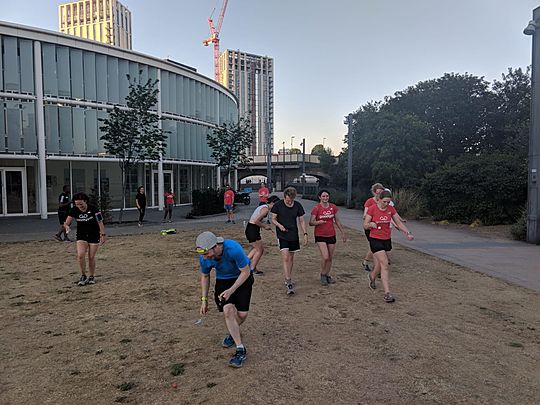 On the most scorchio evening this year, 25 of the coolest runners took on 7+km of running and shifted 70+ bags of woodchip at Ewart Road Clubhouse.

We have had another brilliant week of volunteering and running, with Emma up at the Hilly Fields Fayre, helping to set up, Juliet, Vic and Ian helping out an older person with their garden and many of our runners doing what they do every week, which is running to spend time with their 'coach', the person who gets them out of the house when they don't feel like it. Great work everyone.

Talking of missions, last week we had a very special milestone, when Nykolette and Stephen went to visit Mrs G in her home. They helped out with the task they had signed up to, then realised that she was going to be left alone when the health visitor had left, waiting to be collected by an ambulance. Being the kind, thoughtful people they are, Stephen and Nykolette decided to stay and keep Mrs G company, reassuring her and chatting until the ambulance arrived. This also happened to be Nykolette's 100th good deed. Nykolette has been a big part of our group for around two years now, joining in group runs, going on missions, coach running and taking part in lots and lots of races with the GoodGym Race Team. Those of us lucky enough to know Nykolette can tell you what a kind and thoughtful friend she is and how she goes out of her way to look after others (she volunteers at parkrun, Lewisham Food Bank, Big Red Box, Crisis at Christmas...and possibly others she hasn't even mentioned). Well done Nykolette, keep on doing good and being the most sparkly person I know :)

Joining this delectable team of do-gooders for the first time this week was Eleanor, trying out her first ever GoodGym group run. We also had two visitors, Ian from our neighbours and friends over in Bromley and Chi, all the way from Haringey. Lewisham Love to all of you!

You might have gathered by now that it's been pretty hot today (around 30 degrees), so our warm up was a slightly sticky affair, with a swift game of British Bulldog, that came to a quick conclusion due to some very skillful tagging! Feeling quite warm enough, we got going towards Ladywell. With my H&S hat firmly in place, I made sure we stopped every so often to catch our breath, regroup and take a big swig of water, I felt like I was dragging my legs through treacle, whilst trying to hold a breathless conversation and run up a hill. Phew!

A chip off the old block

The last time we visited the Ewart Road Clubhouse, we were inside, painting the walls and washing the windows. Since then, a rather wonderful sensory garden has popped up (though I'm sure it's taken a lot more work than just 'popping up'!), giving the whole space a lushness and texture that you simply couldn't have imagined before - great work everyone! We were met by Dominique, who offered us water and then showed us the massive stack of woodchip sacks that needed transporting over to the open space, then spreading out, to create an area for children to run around. This area was also housing some broken slabs and rocks, which needed moving out of the way, giving our intrepid teams of two an excellent upper-body workout.

As always at a task, I tried really hard to get a 'before' photo, but everyone was a bit too quick for me. You can still see from the photos though, just how much of a transformation this made. Like little ants, a line of volunteers carried the sacks, with another team cutting them open and tipping them out and a further team raking and spreading the woodchip to cover the rough ground and help prevent weeds from peeping through. In just twenty minutes or so, the job was done - how amazing is that? Something that might take existing volunteers a few days to do! We really hope this has made a dent in the remaining work at the garden. We were told that, on Saturday July 14th from 11-4.30 there will be a Family Fun Day, where the sensory garden will be officially opened by Councillor Pauline Morrison - we are all invited!

Run to the hills!

Our run back to Glass Mill felt ever so slightly easier, with a downward slope, but some people just don't find this enough. As part of his GoodGym tourism, Chi likes to tick off a few different challenges along the way, including a Strava segment and, this time, a steep hill. I casually pointed towards Blythe Hill, which he promptly peeled off to run up! We all continued on our merry way, enjoying a more gentle approach and met up with him further along, where he informed us that he had also tackled Vicars Hill, really, you know, just in case Blythe Hill wasn't steep enough.

As you may know by now, this Saturday sees us enjoying the now annual event that is the GoodGym Olympic Games, a day of sporting expertise, camaraderie and playful competition between the different areas. We had had a request from Jacqueline, to practice the egg and spoon race but, as she'd already left us, we decided to have a go anyway, with the clear winner, with a very professional form, being Chloe. A special mention must also go to Kirsty, who had a very determined and focussed style, never seen in this field of play before. If you can't make it to the games themselves, you can still get involved, by taking part in the GoodGym Olympic Games Nationwide Race, a chance to show your creativity as well as pushing hard over a 1km run. Have a look at the link to see how to log the run and go out there and have some fun (as Chi did, trying his best to get near the top of our GG Lewisham Monthly Time Trial Strava segment...!).

Next week...a brand new task, our first at a school. We will be visiting Beecroft Garden Primary School in Crofton Park, to work outside in their garden. Expect a 5k round trip, a fun task and some fitness fun on the way back.