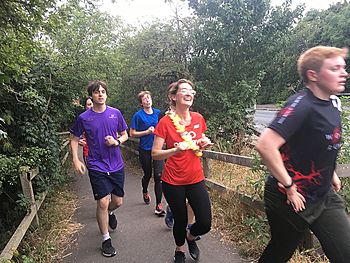 A cycle from Oxford to Woodstock (9.5miles) followed by a run around Blenheim Palace (3-6miles) along the public footpath. We'll then have lunch back in the village before returning to Oxford.

For those just doing the run, meet at Woodstock Town Hall at 11:30am.

This is very much a social session so cyclists and runners of all abilities are welcome and we will pace accordingly.

We've been asked to tackle a few tasks at the top of South Park to make it safer and more pleasant for everyone.

Jobs will include:
* Raking up fallen leaves.
* Clearing the park railings of ivy (revisiting our first ever GoodGym task!).
The ivy covering the railings is a safety issue at this end of the park - since the park is open 24 hours it would be much safer for people using the path if they could see into the park before entering, particularly in the dark.
* Litter picking along Morrell Avenue/Cheney Lane.

Bring your gardening gloves and head torches. We'll bring the GoodGym litter pickers and lights, and the Distillery will provide some other tools.

The Oxford Artisan Distillery has offered a complimentary G&T or soft drink to all GoodGymers taking part in this task. Please wear your GoodGym Tshirt if you have one so it's easy to identify who is a GoodGym volunteer.

Meeting options:
* Anyone wishing to run or walk to the task as a group please meet in the car park of the Richard Benson Hall, 276b Cowley Rd at 6pm. There won’t be a bag drop available but we can use the toilets there. It's under a mile to the top of South Park from there. NB: due to the social after the task there won't be a run back to Cowley Road this week.
* If you would prefer to meet at the task please meet us at 6:15pm outside the gate of The Oxford Artisan Distillery.

The one where Lord Mayor bent my trowel

Round 2 of bulb planting in Marston, and this time we were put to work along Marston Road. Clearly, we're pros now, so we barely needed the explanation of how best to get the daffodil bulbs in the ground before we got digging!

Splitting off into three spots we liberally speckled the verges with bulbs, with extra attention given to the grass bank and corner areas. There may have been some staging of funny photos (Matty, Bethan), the Lord Mayor bent my trowel with over-enthusiastic planting (I demand a solid gold replacement please Mark), and Jessy got to practice her newly re-acquired hopping skills for stomping the turf back over the top of the bulbs.

Our final Marston bulb planting session will be on Sunday 31st October. The timing has been set to allow for volunteering at Florence Park Junior Parkrun first, so if anyone is keen to do that too email florencepark-juniors@parkrun.com

Looking forward to seeing the roads of Marston awash with yellow in March!

As we head into autumn we're getting bulbs in the ground for some spring cheeriness.

Nothing lifts the spirits like the first flowers of spring, and autumn is the time to get bulbs in the ground. We will plant bulbs in Marston this evening on the request of Marston Community Gardeners. This is the 2nd of 3 sessions we have planned for bulb planting this year - we’ll be quite the pros by the end of October! It'll be fun to revisit in the spring to check them out in flower - hopefully next year we won't be in lockdown and will actually be able to.

Some tools will be provided but bring your own gardening gloves, and if you are able to bring a trowel or bulb planter it would be a great help. As the evenings are drawing in I suggest hi-vis for runners if you have them, and headtorches would be helpful for everyone. I'll bring our portable lights and a couple of spare head torches.

Meeting options:
* Anyone wishing to run to the task as a group please meet in the car park of the Richard Benson Hall, 276b Cowley Rd at 5:45pm. There will just be a running group this week as it is a little too far to get to Marston in time if we walk. There won’t be a bag drop available.
* If you would prefer to meet at the task please meet us at 6:15pm outside the CoOp on Old Marston Road.

Emma has done their first race with GoodGym. Performing on the day is a lot of pressure; Emma's dealt with the nerves and turned up on the day to make it happen.

Emma went on a race
Race

Well, that was a delightful way to spend a morning! Hope you all enjoyed your run.

Photos by Barry Cornelius are here.

After months and months of restrictions it was absolutely JOYFUL to run as a group again.

After our task at Aston's Eyot we made our way around the corner to the famous Roger Bannister track.

This iconic track was where the first official sub-4-minute mile was recorded and now home of a few Goodgym training sessions. >

After a short introduction on track rules, Anwen set us off on our workout. We were rewarded with cake and applause at the end and an agreement to see if we could use the track again soon.

Aston's Eyot is a nature reserve tucked away between Meadow Lane and the river. The land belongs (I think I remember rightly) to Christchurch, but there's an active Friends of Aston's Eyot group who manage and monitor it. Our very own Sarah is also a member of Friends of Aston's Eyot. There's all sorts of wildlife resident in the nature reserve - even badgers and deer despite it's proximity to residential/urban areas.

Through the spring an summer months we like to try and get to Aston's Eyot to help out a few times. There's always lots to do!

Tonight the scythes were out again and we got some great Poldark action going, chopping back nettles around a meadow area, and raking enormous heaps of the chopped nettles back (not as bad for the hayfever sniffles this month!). Fresh from our fence detangling at South Ward Allotments we expertly removed and rolled up a long chicken wire fence so that it can be redeployed elsewhere on site. Matty and Meysam bashed some new fence posts in - not the ideal task for someone feeling a bit shabby from a hangover perhaps, but kill or cure....

Turning our attention to other areas of the meadow we threw caution to the wind and let the long-haired people pull out Burdock. Once Bethan got 15 burrs tangled in her hair we realised the error of our ways! Vicky, Sarah and Jocasta took the litter pickers off round some of the favourite picnic areas, finding no pants but making up for it with a burnt bra (approve the feminist principles, less so the littering!), and the rest of the group gloved-up and took to nettle pulling. Hauling out the nettles will hopefully give the smaller flowers room and light to grow and will encourage biodiversity; worth a few tingly stings.

Is it even a GoodGym task if you don't get a bramble scratch or a nettle sting?

10th Good Deed for Meysam - nicely planned so that it was at the same location as his first GoodGym session.
Holly and Venetia both did their 50th Good Deed. They'll be rocking their black Tshirts soon.
Trev - 100 Good Deeds! Wings on their way.
We preemptively celebrated Ben's 250th Good Deed, which will probably take place before we next see him on a group task. Super Star!
A warm welcome Nick! Glad you could join us.