10 runners ran 6.3km to help the Oxford City Council and BBOWT in Oxford. 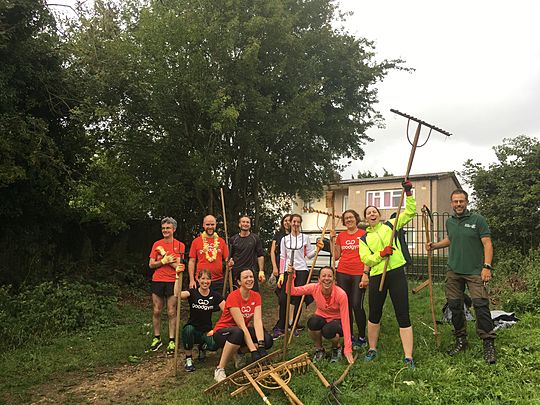 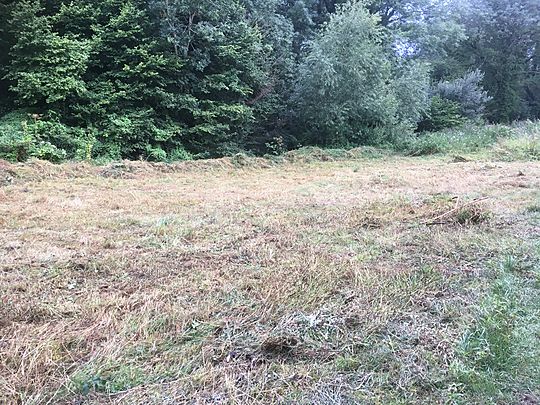 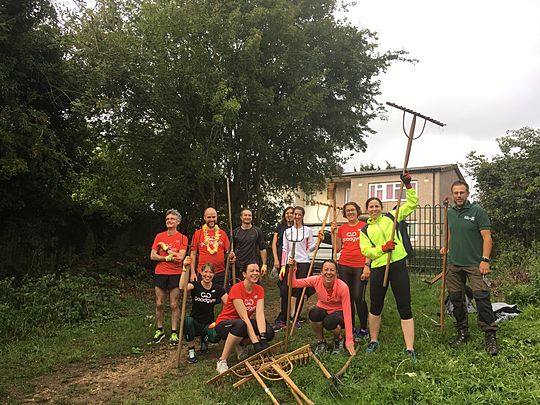 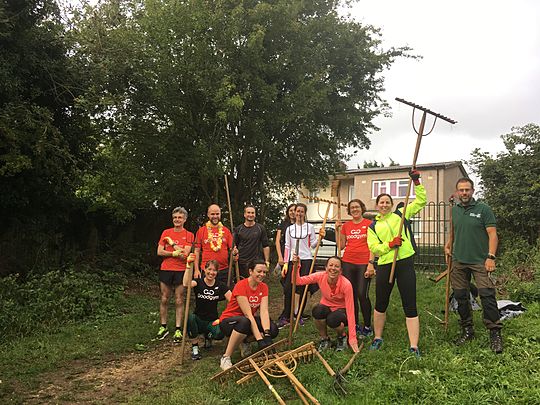 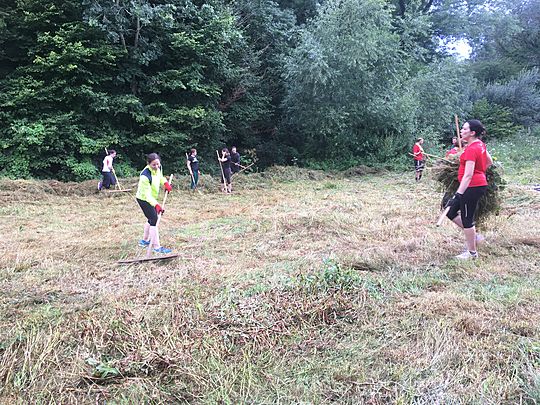 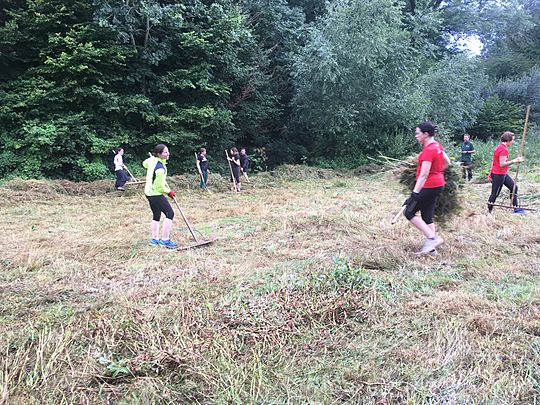 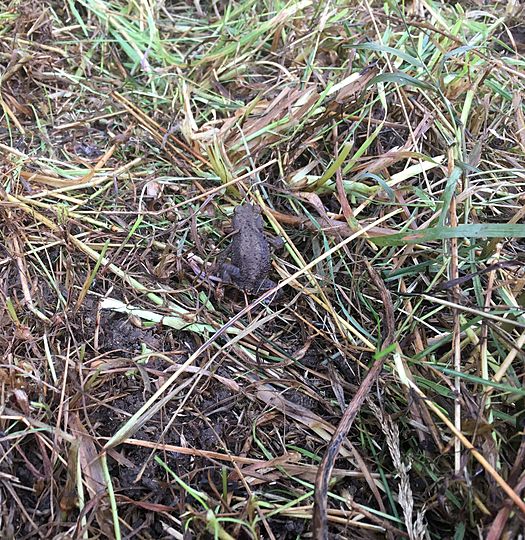 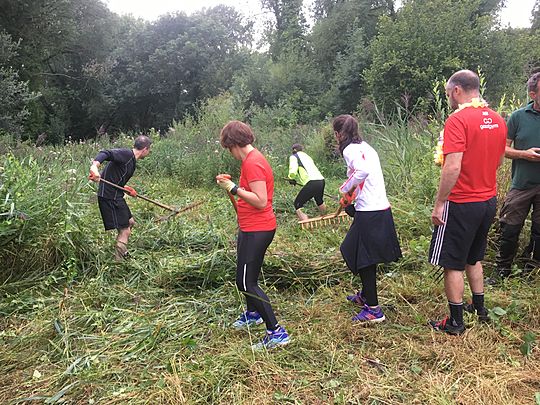 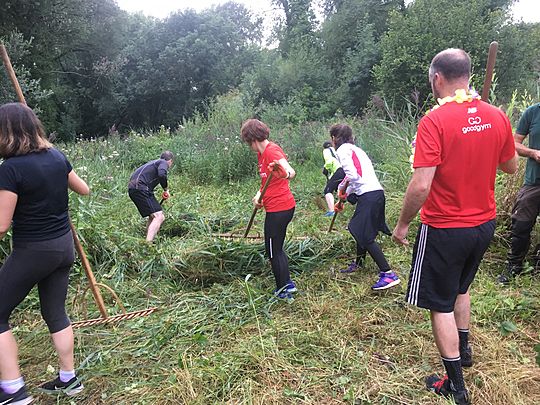 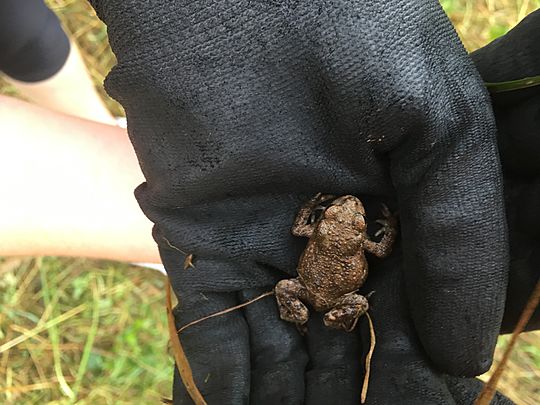 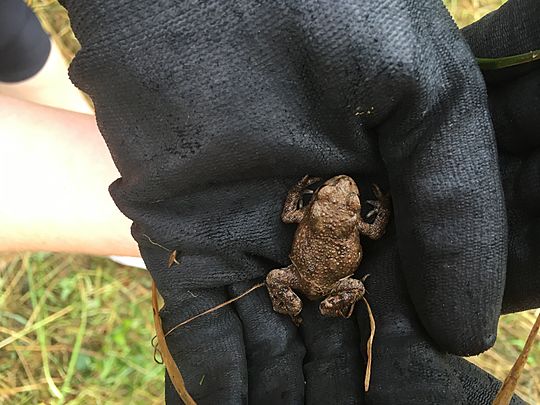 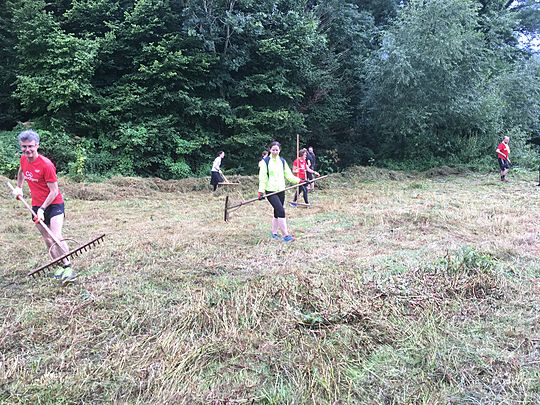 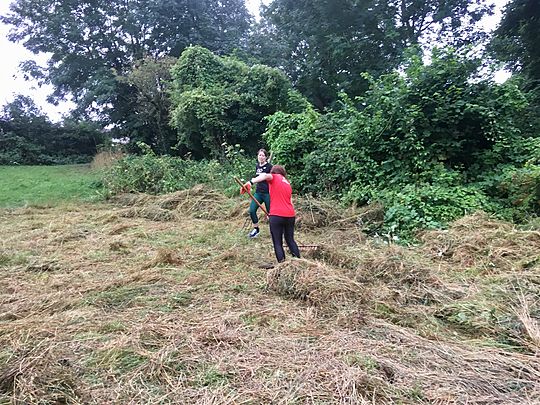 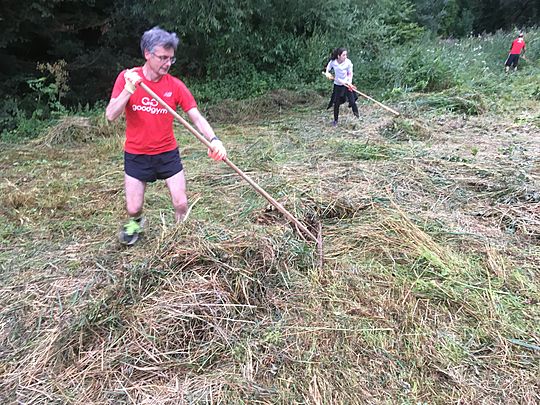 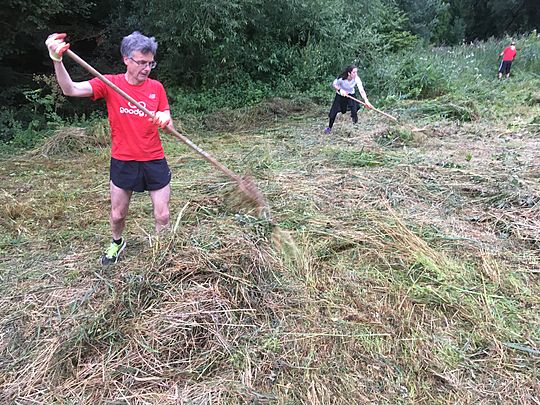 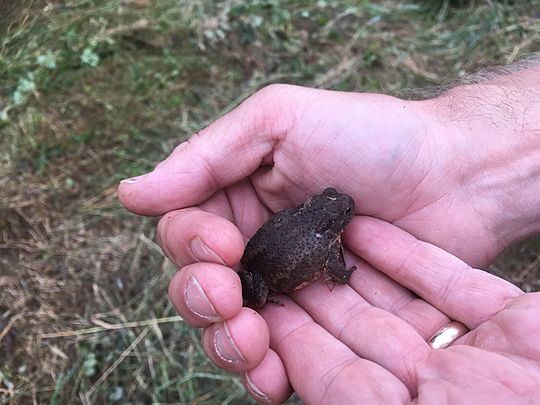 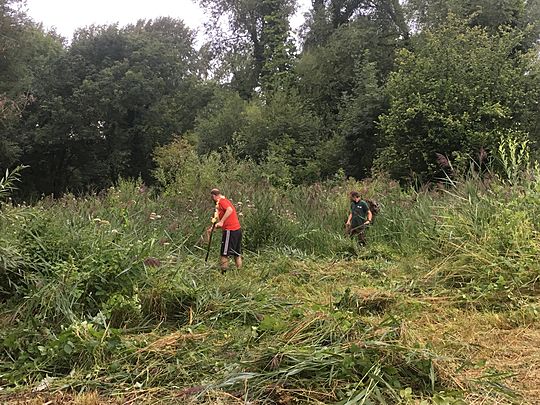 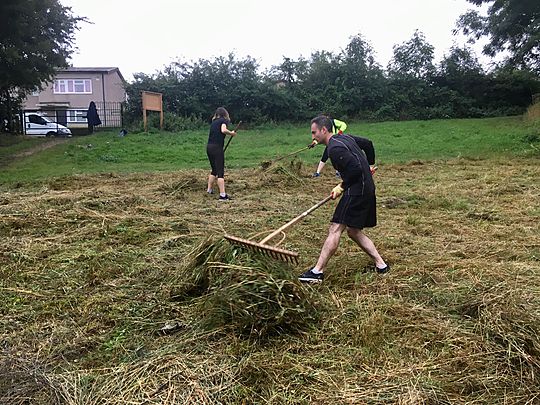 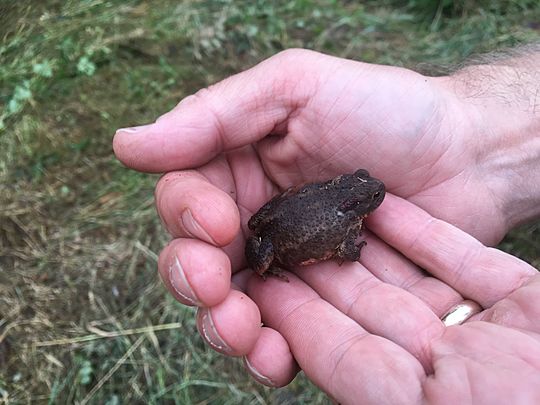 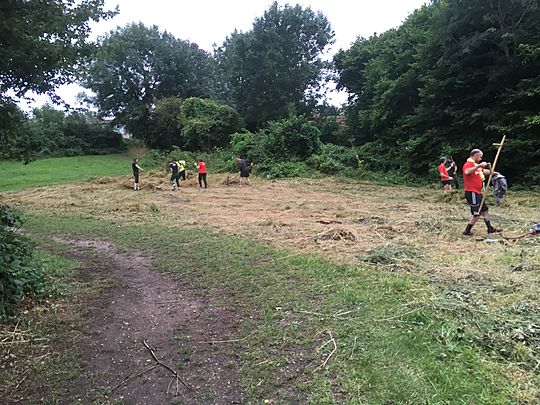 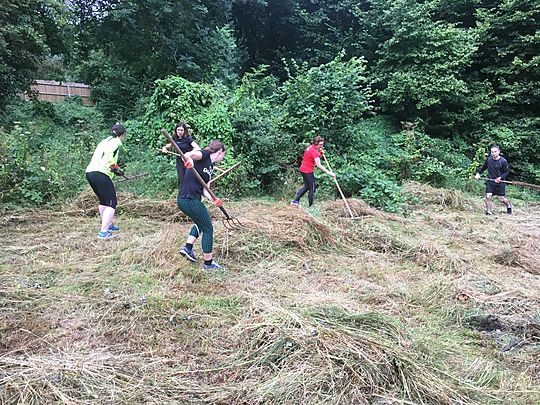 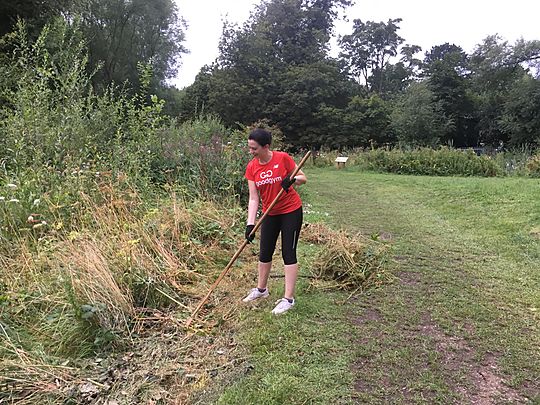 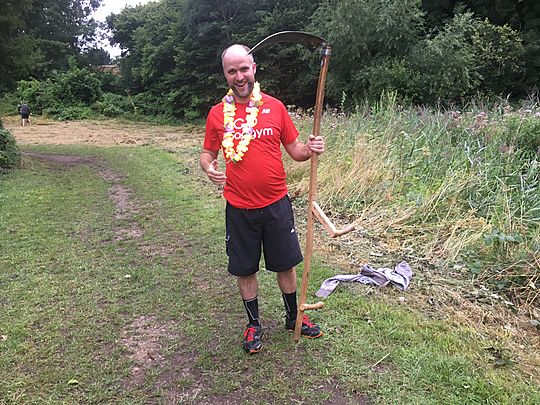 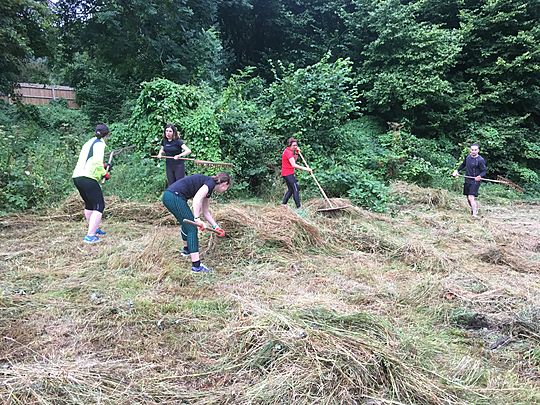 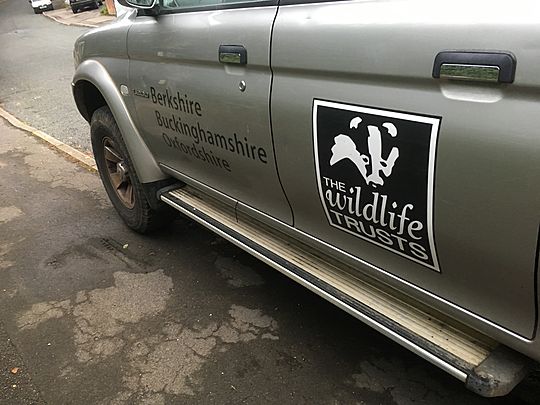 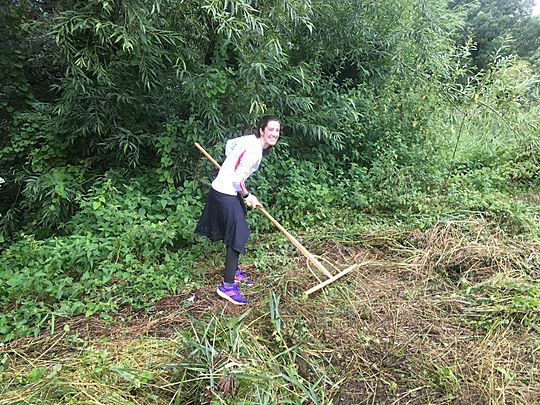 With chances of rain set around 50-50 for the evening, there was advance speculation on whether we would be raking hay while the sun did not shine, and probably while the rain soaked and the wind howled.

We should've had more faith in the weather gods though, as 6pm dawned if not sunny, then at least not apocalyptic.

Welcoming Mark and Olivia to our Goodgym crew, and admiring Helen's 50 Tshirt, on tour from Hammersmith and Fulham, we rattled through a bumper edition of news - Race for Life Pretty Muddy 5k volunteering, Oxford Half Water Station volunteering, post-work Community Mission next Friday, Garland of Joy for Trev for his 10th Good Deed!

It's an unavoidable fact that when headed for Rose Hill some uphill running is going to be required. Dancing around the Meadow Lane puddles we turned the corner and gamely started the climb to Iffley (eyes to the left for our beautifully weeded wall at Iffley Glebe). This is the hill route with a kick in the tail: Just when you think you're done it's UP again! You would never have thought Oxford was a city of flat running routes, as we all arrived at Rivermead Nature Park barely out of puff.

Ed and Andy from BBOWT were there to greet us in the freshly-cut meadow area. Tooling up with rakes and pitch forks we got to work clearing the cut grass. As first to arrive Trev was awarded the scythe, a position of responsibility that drew a certain amount of envy (note to self; find more scything tasks!), while Bethan demonstrated a new skill as a toad whisperer.

Watch your feet - the toads have come out to join the Goodgym group. Don't tread on our new friends!

The toad beneath the harrow knows
Exactly where each tooth-point goes.
The butterfly upon the road
Preaches contentment to that toad.

Thanks to Tim for the Kipling reference!

Half an hour of raking and we had cleared the main meadow area of cut grass, so upped the tempo to speed-raking, thanks to some motivational cheer-leading from Aoife, in order to get the boggy corner sorted in the last 5 minutes.

Upper-bodies worked out, tools stashed, team photo taken, and it was time to run again. The promise of a downhill run all the way back might have been a little white lie, as we started with a climb, but before anyone could catch their breath to complain we were swooping down past Iffley Church and onto the Thames Path.

Pitter patter pitter patter, over the lock, past the geese, over the humpback bridge, past the rowers, up onto Donnington Bridge, under Bethan and Aoife's human archway (hope the random members of the public got a little joy out of joining in), popping out on Meadow Lane for some more puddle-stomping. We can't run Meadow Lane without a fartlek session (tee hee, she said fart!!), so it had to beall along the lamposts; one sprint, one easy, one sprint, one easy etc, reconvening at Jackdaw Lane for an easy jog back to base, muddy legs inspection, and stretches.

Next week is a 2 Goodgym session week, so don't forget to check the list of Oxford happenings, and if it's your first time signing up for a Community Mission just double check that you're actually signed up after reading through the training information - you have to go back to the listing and click 'sign up' after you complete the training step.

Anwen Greenaway
Goodgym trainer for Oxford. I run for fitness and for my sanity! Absolutely love trail running.