4 runners ran 5.0km to help the The Sisterhood of Arts in Southwark. 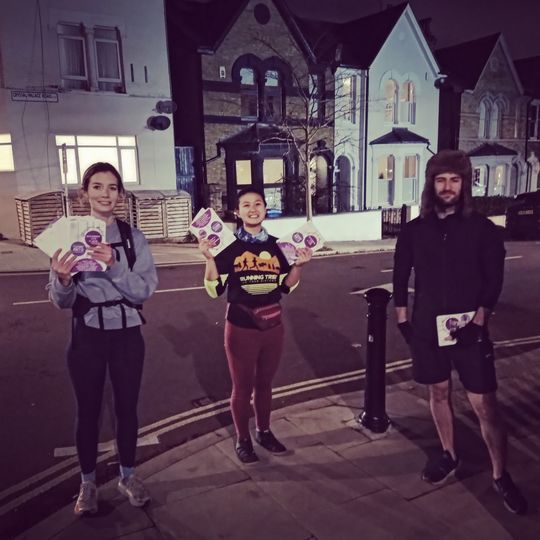 Taking this week off, I gently walked to Old Spike Roastery with a bag full of leaflets from Sisterhood Arts and GoodGym. I realised I had the old(er) GoodGym leaflets with the New Balance logo as the sponsor of GoodGym. However, they have/will be moving to Saucony as their t-shirt (and potentially other merchandise) provider from 2022. Thus, another good chance to spread the word about GoodGym to the locals as well as getting rid of the old leaflets.

Earlier in the day, I noticed we had only three (including myself) signed up for the group run. Flyering as an odd number isn't the best as one side of the street is working faster than the other. However, around midday, I received the great news that Paulin signed up! All four were present before we departed at 18:45. Not knowing exactly how many kilometres we were going to do, I made sure we had a bit of a longer warm-up than usual. After the warm-up, my ice breaker question this week was: What is your favourite Christmas movie/film?

We had the classics like Elf, The Holiday and Bad Santa....and then we had Adam's choice..."In Bruges" 😂 I guess it counts 🤷

Actually, I think we are pretty trustworthy 🙄

A short dash from Old Spike Roastery to Crystal Palace Road in East Dulwich, we split the 750+ flyers from Sisterhood Arts and countless more GoodGym leaflets amongst the four of us. Paulin and Emma took the right side whilst Adam and I took the left side. Like efficient ants, we had a thorough system of delivering both leaflets one house after another. As we zigzagged our way to Sam's flat - almost at the end of Crystal Palace Road, which ended up being a strategic stop. We had run out of GoodGym leaflets and luckily Sam had more!

Armed with more leaflets and just gone the halfway mark, we around to ensure we were making our way back towards Old Spike Roastery, even though we had a slight detour. Firstly, down Jennings Road and eventually, Melbourne Grove we went. We ended up outside East Dulwich Station and still we had a few more flyers.

Just gonna put on my oven to cook the lasagna - Paulin

Yes, somehow 🙄, we made it to Paulin's flat around Hay's Grove and as we were flyering our last remaining leaflets, she was putting on the oven to cook her vegan lasagna. Priorities 🙃

Looking at my watch, we had seven minutes to dash back to Old Spike Roastery to finish in time (20:15). More zigzagging as we made our way through the back streets (boys) of Peckham and East Dulwich. We finished off with some stretches and talked about what we're having for dinner (or if you're from up North.....tea). 🙃

Next week is our last group run of the year! Don't miss out as we're having a social afterwards too!

GoodGym is all about getting fit and doing good! We praise the runners/cyclists/walkers who come to get fit and help out, but we often forget about our task owners and I would like to take this opportunity to thank Holly (founder of Sisterhood Arts) who gave us Sisterhood Arts flyers and we wish you all the best with the Christmas Market. Merry Christmas!