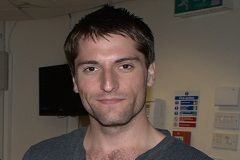 There are no better words to use to describe last night's effort by GoodGym Wandsworth than Truly. Epic.

The task was to move masses of donated bags of compost up to Doddington Community Roof Garden. 'Masses' doesn't really do the job justice. We're talking over 1000 bags. Not only that, but it was up two flights of stairs!

We kicked off the night by guessing how many we would manage, which ranged from 110 to 575. Read on to find out just how many of the 50 litre bags we shifted between just 11 of us....

After just over a mile we arrived at the garden to find a pile of pallets packed with bags. OK, we thought to ourselves, that seems fairly manageable. That was before we realised there was another massive lot of them just round the corner! Not ones to be put off, we set about forming a human chain and got to it. There were many different techniques, from the 'hold it like a baby' to the 'hoik it over the shoulder' approach, but we were soon making good progress. There were some much needed breaks and shifting round of positions, and passers by must have wondered what on earth was going on a shouts of 'the chain!, the chain!' echoed around the estate.

Luckily we managed to borrow a couple of trolleys from kind Mr Tesco, which sped up the process, and we kept careful count as we went. After 40 minutes of the upper body work out of all time, we called it a night and I can reveal that Steph guessed the closest final number at an astonishing...

Well done gang, that is a huge amount of work, and massively helped out the volunteers at the garden. If you would like to come back and put in another shift, there will be a community mission happening on Saturday morning, where we will be back again to help transport some more.

If you fancy the first in a series of monthly north of the river GG on tour parkruns, then check out this one at Gunnersbury park, while there is also a great lunchtime mission every Friday to help serve food at a homeless centre. There's so much to look forward to! Happy running, all.

ENOUGH of the LOUGHborough Farm wate

One runner assisted in clearing away stockpiled waste to make the Farm a more cleaner, welcoming place for visitors.

Mon 9 May 18:30 pm
Map
Battersea Arts Centre, Lavender Hill, London, SW11 5TN
Sign up now
Are you ready to take on a huge job for a much-loved community garden?

We have been asked by Doddington Community Garden a massive number (we're talking hundreds and hundreds!) of donated bags of compost up to the roof garden. This is going to be one big work out, plus you'll be doing a really valuable job for a garden that relies on volunteers. Without our help it would take them days!

Get rid of Waste for Loughborough Farm !!

The Loughborough Farm is a patchwork of community growing spaces bringing people together in the heart of Loughborough Junction, South London.

The Loughborough Farm is a community garden open to everyone who wants to learn organic growing skills and meet their neighbours. They have been around since 2013 and provide a healthy outdoor space for people to engage and connect with each other and nature.

Today we need a couple of people to help with 'waste management'.... Loading a van with the bits and bobs that have been gathered to head off to the dump / recycling. It's a one hour job max - so in and out like a flash ⚡

There is also a fence panel which needs carrying from Ian's garden back to the Farm to be collected so a great chance to work on some upper body strength!

The team at the farm have gloves and all the equipment but do bring your own if you have them.

Migle will be looking after you on the day and can be reached on 07825001673 if any issues finding your way.

On a lovely bank holiday afternoon six GoodGymers came together to help out at a local community garden, and it was lovely to welcome Becky to the group for her first Wandsworth run ahead of her wonderful wedding this weekend, and to meet Rosanna at the task! A huge well done goes to Kelly who raced that very morning at the Vitality 10km and still had a few more miles left in her legs for the task!

First off we did our weekly warm up to get the blood pumping and our muscles ready for the 3km run, and we also tested our horticultural expertise by naming a plant, flower or tree that begins with the same letter as our first name. All those gardening tasks are obviously paying off as displayed some expert knowledge, naming juniper, bluebell, kiwi, alium and apple!

After a quick run down to the garden and narrowly avoiding the detour we made last time, we arrived to find Sha, the volunteer who runs the garden, waiting for us with a list of jobs. We started off by trimming back some plants and pulling out the sticky willy (teehee), and then moved on to lopping back branches and putting everything in the compost. We even attracted a few passers by who were keen to know what we were up to! Everybody is welcome to join us at GoodGym and always will be.

Job done, we said goodbyes to some of the group while the rest of us made our way back through a buzzing Wandsworth - we were tempted by the lovely outside tables of people eating and drinking but managed to resist the temptation to stop for refreshments!

Next week we have the task of all tasks - shifting over 1000 bags of compost that have been donated to a community garden up onto the rooftop. It's going to be massive, so bring your friends! You can sign up for it here. Don't forget we also have a regular lunchtime mission on Fridays helping serve lunch at a centre for the homeless in Clapham.

Happy running one and all!

Helping out at a community garden

Today we will be meeting at the same place, although as its bank holiday we have an earlier start as a special one off.

We will be meeting at the BAC at 5pm to run down to Bramford community garden to help out with various jobs. This busy park is run by just one hard working volunteer, so as much help as possible is welcome! We'll do a fun fitness session before heading back to base.

Bring gardening gloves if you have them!

GROAD on the Move !!

Get Rid Of And Donate (GROAD) do amazing work making use of unused STUFF donated to them by the public. We will be collecting items for the beneficiaries of the project - rough sleepers, asylums seekers & refugees (including for the Ukraine appeal), vulnerable people and families and support services for the elderly. The donations are collected, checked and sorted for distribution to people in the community. .

The task is to help Andrea and the team move their small storage unit down to their new Brixton home and we need as many people as possible.

There may not be a member of Task Force present but you will be instructed with what to do.

Please bring a mask as the task will be inside 🤿

No Passata in sight!!

A mega effort from 6 amazing GoodGymers to get the Rhytham of Life move underway!!

After being given a 14 days to move out if the building Rhythms of Life needed a big helping hand!

warned up by a Green Park 2k loop we headed to Dover Street ready to go!!

Shifting an Everest size clothing mountain, 150 creates of toiletries, 1000 big bottles of Passata and 2000 tin cans of beans from the dungeon, up the stairs and piled high ready to be moved in the morning!!

monster effort from everyone!

hope you are around next week where we tackle the remaining donations and pack the vans full for the move!

** Last minute change of plan, original task is delayed to June. We are helping Rhythams of Life at their Dover street location. Getting stuff ready to distribute to Westminster Homeless community. Please meet at Green Park station by the fountain, to either walk or run to task! See you there.

Get Rid Of & Donate is a group who repurpose people's unused stuff! They have had a massive clothing donation recently now need to get it out to those who need it!!

Either meeting at 6:45 outside Green Park station (park exit by the fountain) for a 2k run to the task. Alternatively meet outside Zimbabwe House on The Strand at 7pm.

Usually people come up and take any clothes they need as well as a bag of essentials.

Andrea who will be there to explain what to do has advised on bringing minimising personal belongings. She will give us a briefing when we arrive but of course don't do anything you don't feel comfortable with!

Adam has just reached another level: 100 good deeds with GoodGym. That's at least 100 times when they could have easily done something easier. But they didn't, Adam has kept going and going. Helping a lot of other people and getting a bit fitter at the same time. Congratulations Adam.

Well done Adam! You did it before your trip to Jordan ;) A great achievement and another shirt to hang up on the wall ;)

There's space to change and leave bags and toilets. We're not planning to do anything purposefully dangerous, but GoodGym takes no responsibility for your safety during group runs, you participate at your own risk. Participants accept full responsibility for items stored at Battersea Arts Centre, and Battersea Arts Centre and GoodGym will not be held liable for any losses or damages.

Get rid of Waste for Loughborough Farm !!

Helping out at a community garden

There's space to change and leave bags and toilets. We're not planning to do anything purposefully dangerous, but GoodGym takes no responsibility for your safety during group runs, you participate at your own risk. Participants accept full responsibility for items stored at Battersea Arts Centre, and Battersea Arts Centre and GoodGym will not be held liable for any losses or damages.