10 runners ran 4.4km to help the Sustrans in Leicester. 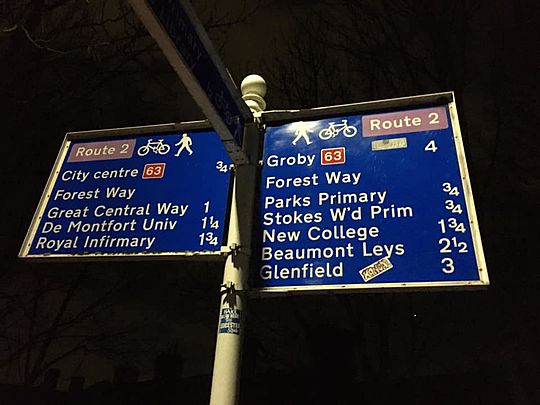 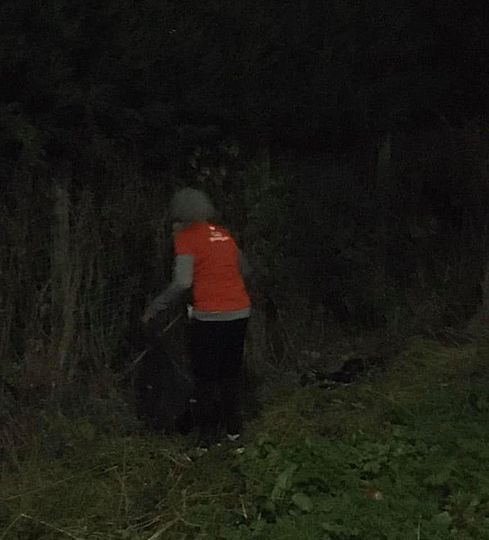 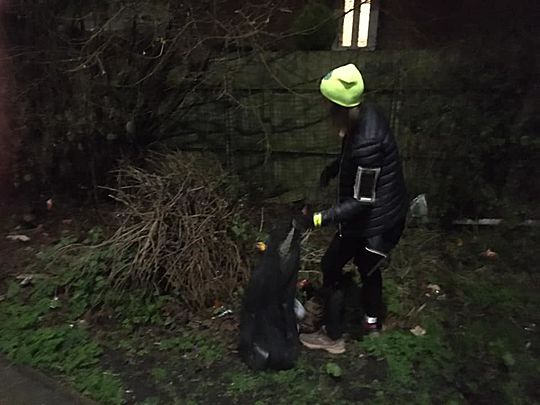 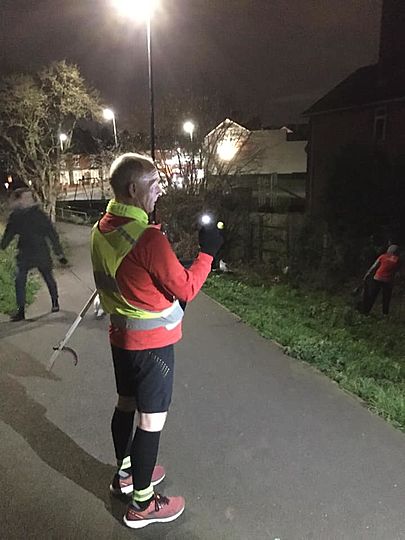 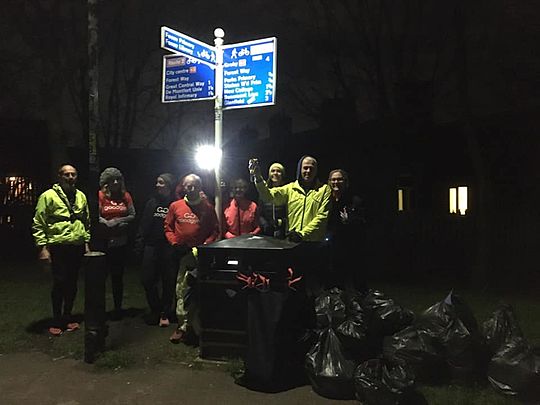 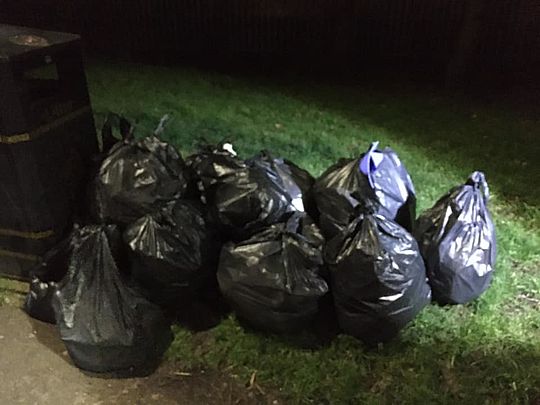 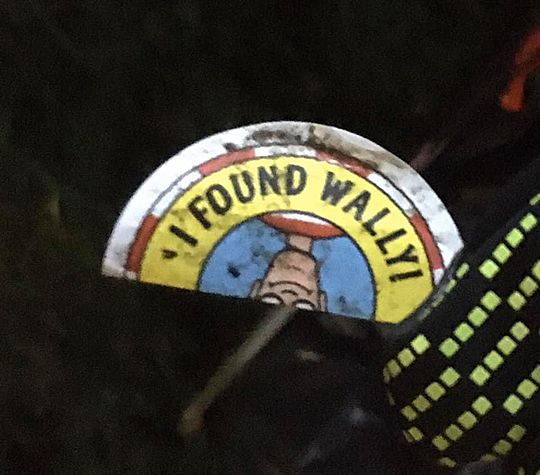 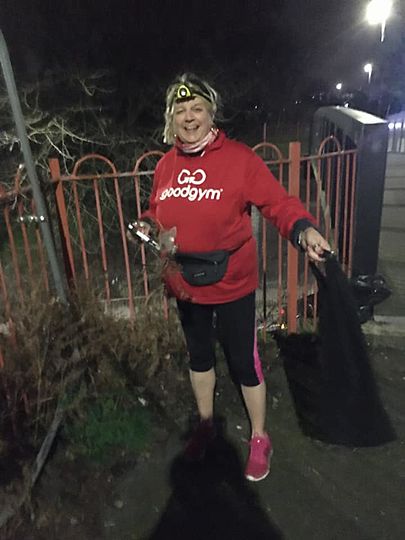 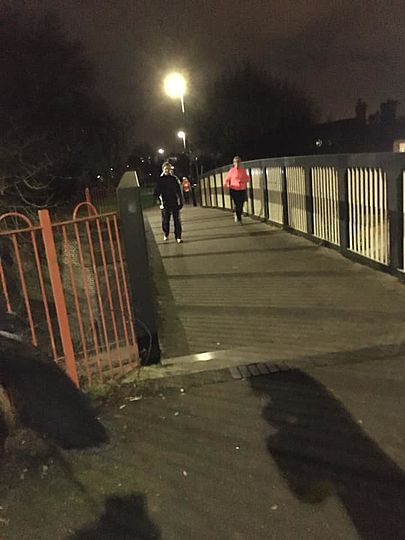 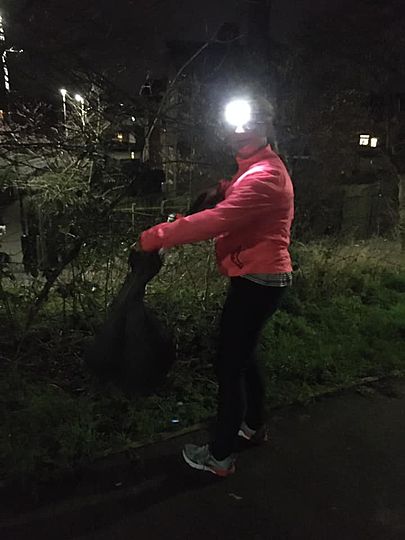 Pre-run tonight something unusual happened. And it wasn't even the news Jimmy brought us that the International Space Station was due to pass over us at 6.24pm during our task. Way more unusual than that. Neither Mel or Stu had competed in a race the previous Sunday! Unheard of! So our running news was limited in the main to the marathon training of Michaela and Jen and Huw's unfortunate shoe choice from his race.

The runners set off along the river to Frog Island, looping round to meet Mel and Dave on the bridge over Fosse Road North (not troubled water) that contains Route 63 of the National Cycle Network. The section from Rally Park to Stokeswood Park is a notorious litter hotspot but tonight it really took the biscuit. Or more appropriately, the crisp packet.

I've filled half a bag and I haven't moved from this hedge!

With a brief pause to try and spot the ISS proving unsuccessful (pesky clouds) we started work on the 500m section we usually manage to cover. However, such was the sheer density of the litter we only managed to get half way in our alloted time, filling a whopping 16 bin bags full of litter. Indeed, Stu noted the he managed to fill half a bag full from one single hedge!

On our litter picking tasks we usually find an array of the weird and wonderful mixed in with the beer cans and crisp packets. Tonight there was a men's jacket, a baby's bottle and half a number plate. But Natalie managed to find the hardest thing to find in the world...Wally! This got me thinking I might turn these litter picks into a mini treasure hunt, hiding something (suggestions for what welcomed) along our route before the task and awarding a prize for whoever is the one who finds it!

Bags safely deposited by the bin in Rally Park we waited what seemed like 20 minutes for Jimmy to re-dress himself in his hi-viz gear (it ruins the photos) and headed back with a loop of the park (sprinting from back to front of the line) and a sprint finish to complete our fitness session. Lisette obviously left teacher mode in her classroom and become the rebellious pupil, setting off for her sprints before the "clap" every time!

It was also great to get some feedback from the public tonight. A woman out walking her dog had seen the bin bags, left by the fence as we filled them to collect on our way back, and assumed that someone had simply dumped their rubbish on the route. A fair assumption given the state of it tonight! However, when she discovered us litter picking she was delighted and showered us with compliments. It's fantastic to get that show of gratitude direct from the community you are helping. Well done everyone!

Next week we're back to Saffron Acres Community Heathland. All tools and gardening gloves will be provided but if you have one please bring a headtorch for that task. I'll bring a few spares and a worklight so don't panic if you don't have one.

Giving out race numbers before the Watermead Challenge