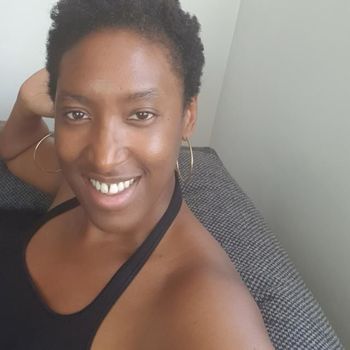 Stella signed up to a document check
doc check

Document checks are required to run to help older people.

You can find out more information here

Any questions, please get in touch with dbs@goodgym.org

Oh my it was a cold one.

As 7 tough-as-nails GGers gathered on Riverside Drive for our monthly visit to the Ham Lands, much of the talk was over the drop in temperatures and whether one more layer might have been a good idea. Several had already been out for morning runs and maybe didn’t fully appreciate the chill in the air until stationary. Cue copious whingeing and swearing at the wind. Mainly from JP - perhaps not the most tough-as-nails of the group.

The task was similar to previous missions - raking up scrub wood to avoid the grasslands growing too much difficult flora, filling large yellow refuse sacks and dragging them to dump the contents under the trees.

There were plenty of rakes to go round and we used the work to get a bit warmer. As usual there were some deeper-rooted rotters needing to be dug out with the pick axe, which Chris and Stella took to with aplomb.

We made excellent progress and had soon cleared a large area and felt that we had begun to deserve the post-Ham Lands visit to the Swiss Bakery that has become our tradition (and the main reason some of us attend this mission, ahem).

With such good work done we treated ourselves to a 10-minute early finish and headed over, managing to secure tables and get our orders in for lashings of hot coffee. Then came the flammenkuchen - on which the unbreakfasted amongst us fell ravenously.

Oh my it was cold, but OH MY, the Swiss Bakery….

Same time next month: second Saturday which will be the 12th March - see you there!

This is a repeat community mission, which takes place every second Saturday of the month, from 10.00 - 11.30am.

The Friends of Ham Lands work with local naturalists and the Council’s ecology officer to identify work that needs doing in the Ham Lands area.

Tasks will vary from week to week: sometimes we will be clearing weeds, brambles or other undesirable plants, sometimes tackling Himalayan Balsam by the river (in the summer), sometimes it will be a litter pick.

All of these tasks are aimed at (1) maintaining the sheltered open grassland areas and open woodland, to improve the habitat for flora and fauna, and particularly for the local butterfly population and (2) maintaining some of the small footpaths through the scrub that are in danger of being overgrown, to ensure people can continue to enjoy the area.

Please wear working clothes including strong and waterproof footwear. Due to Covid-19 restrictions, the Friends of Ham Lands are not able to provide gloves and hi-vis vest. Please bring your own gardening gloves. If you have a hi-vis vest or jacket please wear it. If you have secateurs or saws please bring them.

Children are very welcome but need to be accompanied by an adult.

We meet at the corner of Croftsway and Riverside Drive https://goo.gl/maps/78E2thtb5J1f1rP2A

Stella is a now a pretty committed GoodGym runner. They've just run to do good for the fifth time

Parkfields community garden were in need of our help on Saturday morning. Four GG crew and other local volunteers came to pitch in with some tasks to help tidy the site up. The skip was unavailable so we sorted rubbish into piles ready for collection later. Stella cleared the entrance way, rooting out some seriously big weeds and clearing a curtain of climbing plants to make the way in more welcoming and less of a 'secret garden'. Adam, Emily & Jassy worked to transfer bags of stones into sturdy rubble sacks and sorted, chopped and moved lots of old timber, brambles, and plant debris to reduce a waste pile and liberate some tarpaulins. One highlight was when Emily was put on a pedestal for uncovering a ceramic sink support. Thanks to Alan, Kath and Karen for welcoming us and giving us a great challenge. We look forward to coming back and helping more as the garden takes shape.

Stella has been to three different GoodGym areas. Sat 15 Jan 2022

A Tourist likes nothing better than exploring new areas and meeting new people, and that's what Stella has been doing. Stella has been to three different GoodGym areas now - nice!

It was a cold, frosty morning but that didn't stop an intrepid group of GoodGymers head to Parkfields Community Garden to help tackle their jobs list. Two main tasks for the day - to clear the rubbish out from under the fruit trees and add more cardboard as a base layer to stop the weeds AND move the wood chip pile left on the side of the road that had rotted into perfect compost (once the roots, weeds and brambles had been removed) to the orchard. Heavy jobs but we joined other volunteers and kept at it. Adam, Rosanna and first-time GoodGymer Rachel tackled the wood chip pile - removing weeds and getting it ready for transporting whilst the other Rachel and Stella prepared the orchard. The wood chip pile was full of interesting finds including a boiled egg and a roll of tape! Very eggciting. Yes, eggsactly. Eggcellent.

The wheelbarrows were filled multiple times (and we even tried to guess how many runs we had left once the woodchip bag was removed - although we forgot to count so I say we all won that score). The fruit trees will feel the benefit as soon as the compost rots in.

We all felt we'd achieved alot in the time we were there and it was very satisfying to see the progress. Tea was made by Amanda but I don't think we paused to drink it! We have promised to return as they have big plans on how to open it up to the community but lots of prep work needs to be done. We'll see you next week to remove the play sheds.

Big shout out to Rachel on her first ever GoodGym! Hope to see you again soon.

Sat 22 Jan 10:00 am
Map
Parkfields Community Garden, Meet at the gate to the allotments opposite Barnfield Riding School, Parkfields Rd, , Kingston upon Thames, KT2 5LL
Sign up now
Clearing the children's playspace at the garden will enable us to begin forest school sessions

Two semi derelict play houses need to be broken up, and waste metal and plastic stacked ready for collection by council contractors.

We will use a trailer to remove plastic and metal waste which is currently a hazard around the garden. After that we can begin forest school sessions for local children, and permaculture, gardening, art and yoga sessions for adults.

Risks
We will use lump hammers and crowbars to break up two wooden playhouses, then we'll separate the timber, plastic and metal waste ready for collection by council contractors. Wood splinters and nails can scratch, so please wear the gloves provided and take care when breaking up the structures.