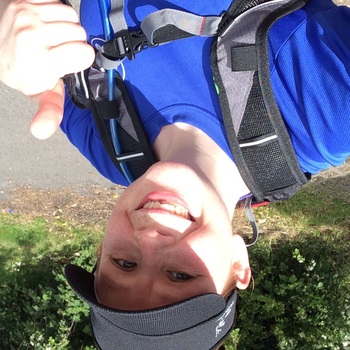 We will be running to two tasks tonight: we will be helping our regular task, Felix Road Adventure Playground as well as returning to Faithspace to help Hotwells and Redcliffe Development Project with gardening there following our last failed attempt.

Spring forward for an Emma-zing 💯

It was great to welcome Natalie and Tracy to their first Bristol GoodGym run this evening! It was a special night for several reasons. Richard G hit his 5 year Group Run streak. What a hero. To mark the occasion, he had a fetching '5 today' badge which he wore with pride for the rest of the night. Our second celebration of the evening was Emma becoming a Centurion with her 100th Good Deed. Massive well done Emma, we look forward to seeing your wear your wings with pride 😊

Spring forward for a good forking

The group split into two gardening tasks to celebrate the first light Tuesday evening of the year. The first group set off on a longer 8km run to Easton Community Garden. There, they did some speed compost shovelling, sawing, sanding, digging and weeding to make a dent in the pile of work required to start off the warmer months at the garden. We will definitely be back to continue this work before long!

The second group headed over the hill to St Werburgh's City Farm Community Garden. The garden has adults with disabilities there during the week, so the group were set to work with manual tasks around the garden which are too difficult for the group. The tasks were: digging and deweeding a large mound for planting, putting their signs up, weeding a bed for planting, shovelling animal compost (Group 1 weren't the only lucky ones...) and chopping down large amounts of overgrown willow. Sarah was gobsmacked at how much of a difference we were able to make in just 30 minutes with all hands on deck.

After we had got a bit too involved in our willow-lopping, it was time to hot foot it back to base. After this, it was time for our monthly GoodGym Eats, where twenty of us crammed in to Bambalan for delicious food and a delicious Alice-baked cake (again!) to celebrate Emma's 100th. Thank you Clo for organising!

It was wonderful to see so many people tonight for our event ahead of World Earth Hour on Saturday. Especially good to welcome Richard, Alice, Alexander and Andy to their first GoodGym Bristol run!

Tonight was a cause for many a celebration as it was Zdeni's 100th Good Deed, which she has completed her past 50 deed for in just 3 months! Massive well done Zdeni, you are great!

Our first group tonight went to our regular task, Felix Road Adventure Playground. While our tasks were set up, the group started the longest Squat Jump Macarena (in my opinion, anyway). The Felix Road team were glad to see so many pairs of hands for the big, heavy work they had planned for us. They had hired a skip and the group first had to clear the skip of metal objects, which they can sell to make money for the charity and then clear a large wood stack and a whole area of wood, rubbish and more ready for the summer. The group split into teams and got the work done in just 20 minutes, much to the Felix Road team's amazement!

Next, it was time for our regular clear-up of the playground. Half the group got to work tidying toys and picking up litter. Meanwhile, the other half of the group did a 10 minute sprint leafleting session to spread the word of Helpful Peeps locally.

Before we left, it was time for a game of Cone Up, Cone Down (but which way really is up?). It was a neck-in-neck competition and the cones up finally took it with just one cone and some questionable rule-following.

Mel led the second group to Dame Emily Park to help them with a big litter-pick of the area. The group filled 11 big bin bags from around the park and only had to stop when there were no more bags left. Included in their pickings were Darren's bear, which was then held at picker-point with Darren.

This was in competition with Alice's bear which, although she had threatened to wear her panda onesie, had turned out to be a panda carrot cake to continue our World Earth Hour theme. The litter-picking crew got in their quick, but reports have it that it was the tastiest panda around.

Once Zdeni's group had conjoled her into her Centurion outfit, she also produced an array of amazing baking to add the party. We do love it when someone reaches a milestone!

Our final (sadder) celebration of the night was to say bye to Alex who is off to Pembrokeshire for the summer. We will miss you (and who is going to make the puns?!) but have an amazing time!

Tue 26 Mar 18:20 pm
Map
Workout Bristol, Welsh Back, Bristol, BS1 4SB
Sign up now
We will be litter-picking and more for Earth Hour

We are partnering with Earth Hour. As well as half of the group going to help at our regular task, Felix Road Adventure Playground, some of the group will also be doing a litter-pick with Dame Emily Park Project to celebrate GoodGym's partnership with Earth Hour

🦍🐘🐬 Our world is under threat like never before... We must find ways conserve nature and reduce the most pressing threats to the diversity of life on Earth 🦁🦎🐗🐟 We need a global deal for nature and people to reverse the decline.

Earth Hour is the world’s biggest switch off event. Each year, millions of people around the world switch off their lights and organise events – at home, in their community or in their towns or cities – to show they care about the future of our planet.

From the week commencing March 25th, GoodGym will be teaming with Earth Hour to do good for the community across the UK with a variety of environmentally themed tasks.

Earth Hour highlights the changes needed at a global level, but also encourages everyone to take personal action. You could, for instance, change the way you eat, embrace reusables and buy less plastic, or help to restore nature in your community. You can share your pledge using #VoiceForThePlanet throughout March to show how you are making a difference.

Ruth is a now a fully fledged GoodGym runner. They've just run to do good for the first time. They are out there making amazing things happen and getting fit at the same time.

Due to Storm Gareth, we were sadly not able to paint the St Paul's railings this evening with the fear that our painting would end in puddles (or, with the wind blowing right now, that the railings would no longer be there at all).

However, we still had two tasks to help with tonight. Welcome to Ruth, Hannah, Roz and Catherine who joined us tonight! Before getting started, we did a birthday warm up for Alice, based on her number of years for each warm up activity. We then split into two groups...

The second group split into two to let Gary's speedies speed away into the night. We reconvened at St Werburgh's Community Centre, where we had been left a list of tasks for the group to do. After rummaging through various cupboards and rooms, we gathered equipment and got to work sweeping the outside area where we had helped remove their rubber play area a few weeks' ago, litter-picking and playing the age-old game of How Many GoodGymers Can You Fit In A Toilet * (there was some painting involved too).

On the subject of toilets, Head Office had assigned us the task of creating a number 2 tonight. Jack took on the role of Artistic Director and did a great job of making a small space, no ladder and 30 GoodGymers recreate our placing in the timeframe of GoodGym areas.

After all that, it was time to head back to base and to belatedly celebrate Laura's 50th Good Deed which she got on Friday's Community Mission and Alice's birthday with some delicious baked goods!

*historic evidence of this being an age-old game not confirmed