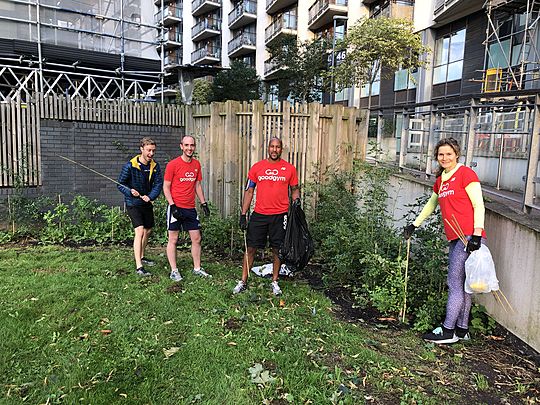 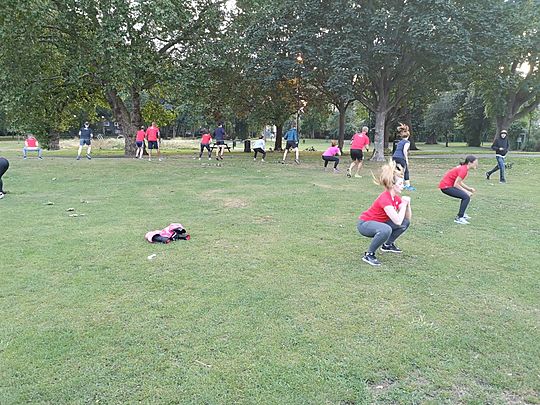 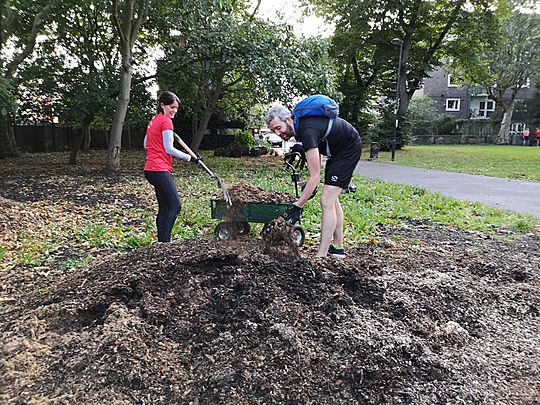 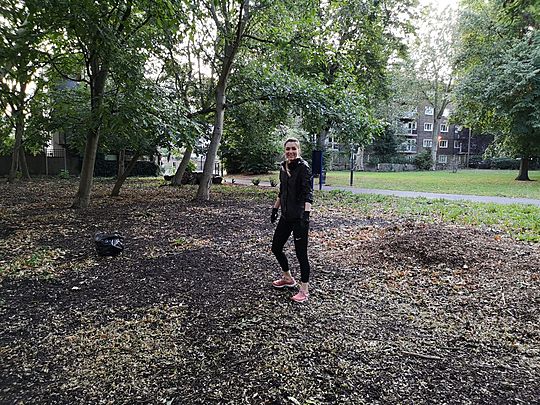 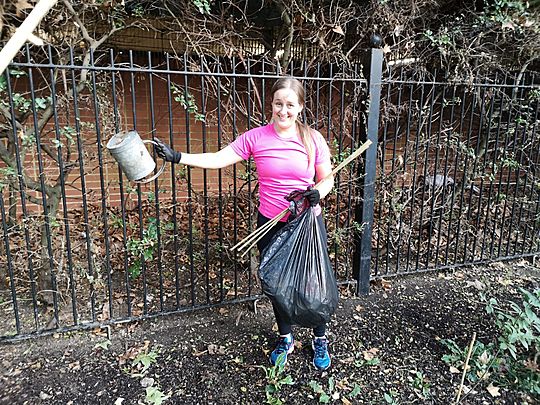 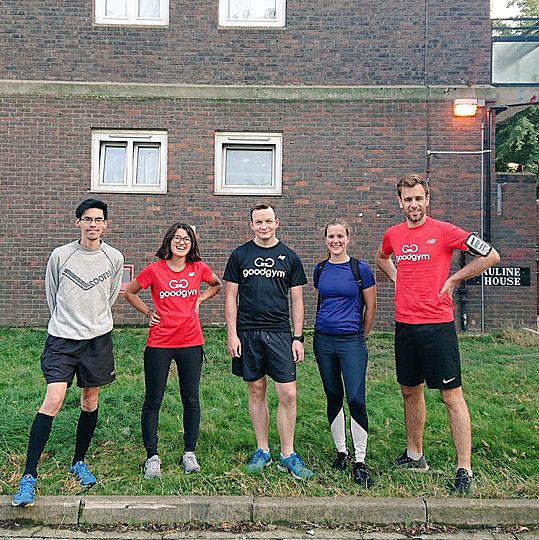 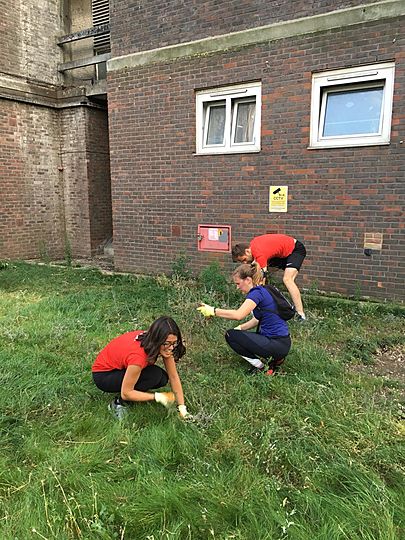 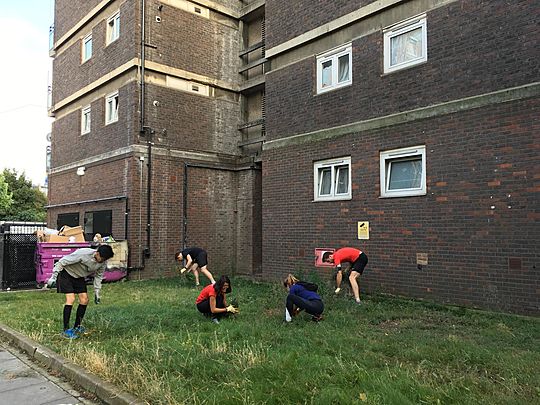 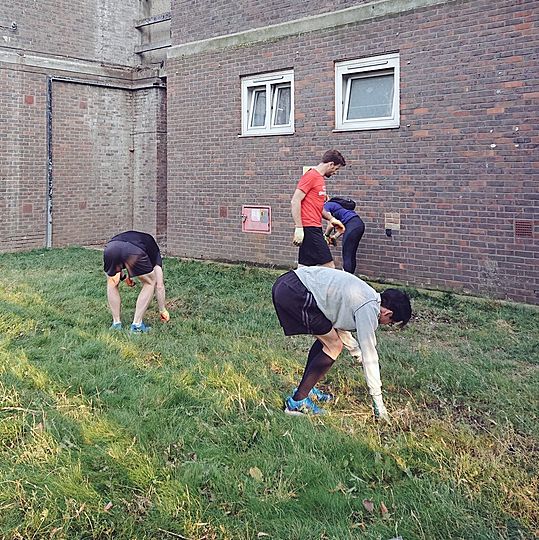 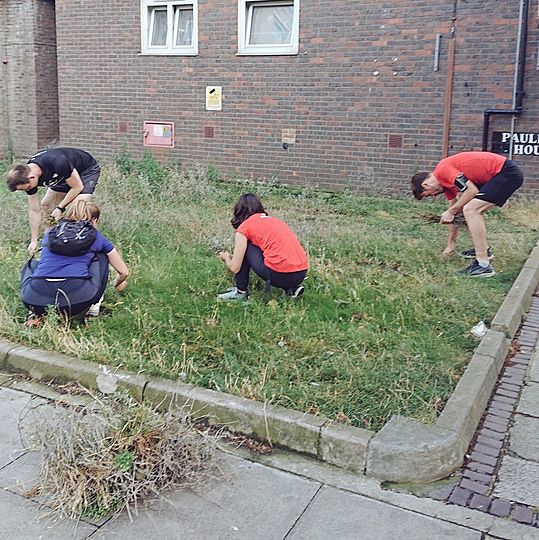 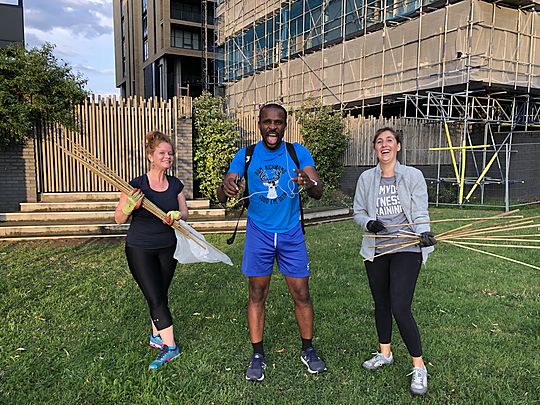 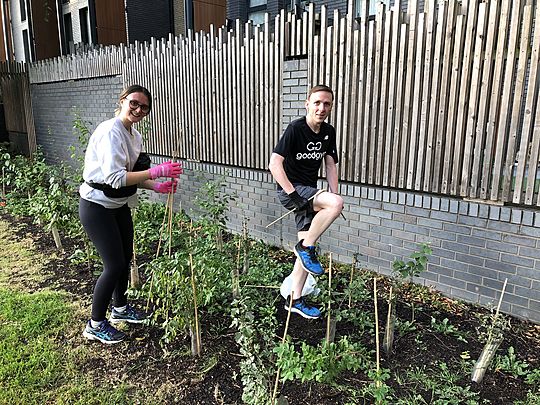 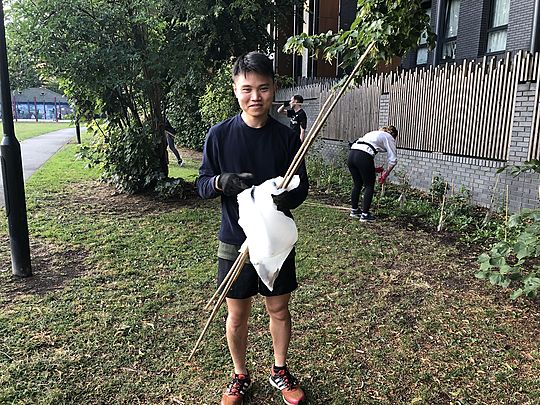 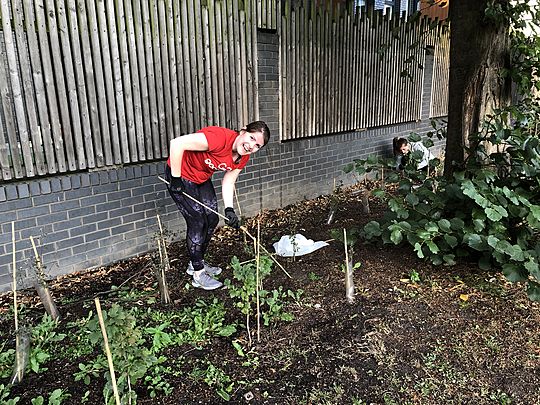 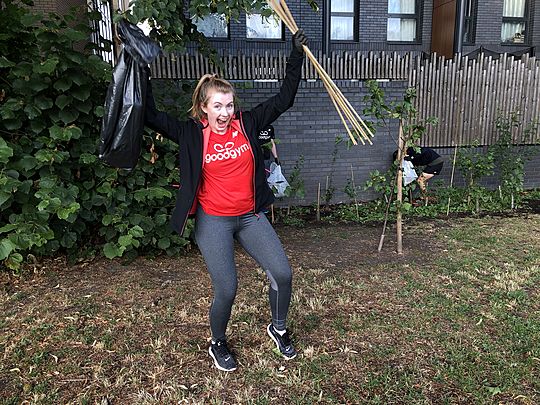 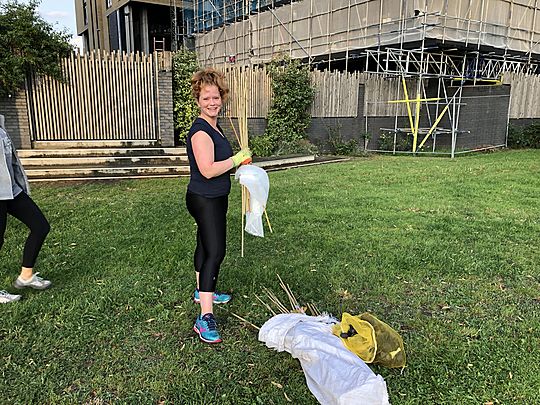 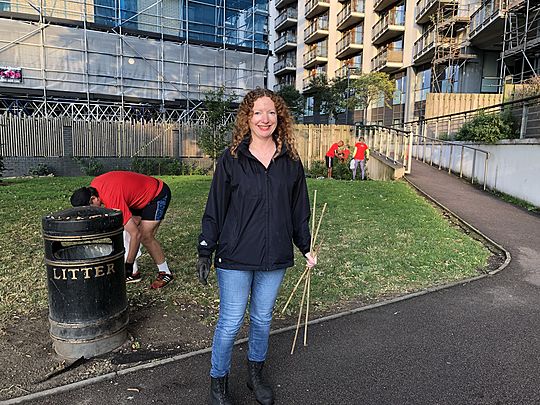 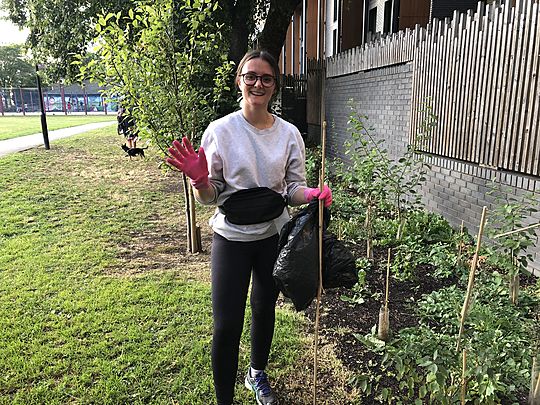 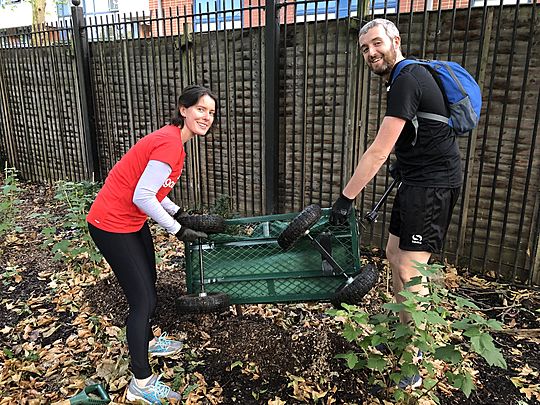 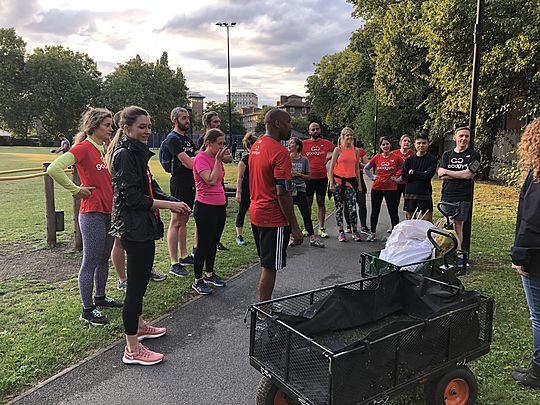 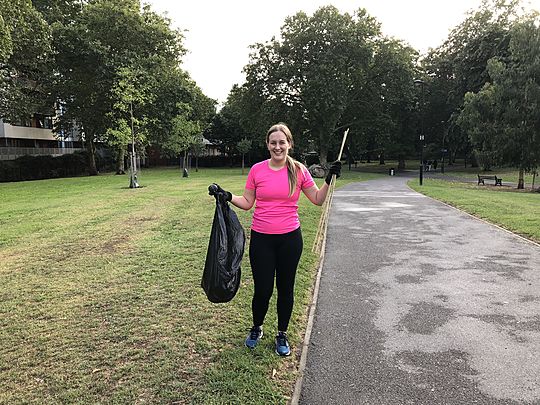 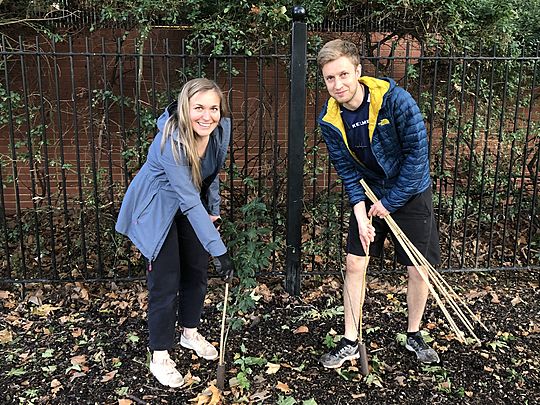 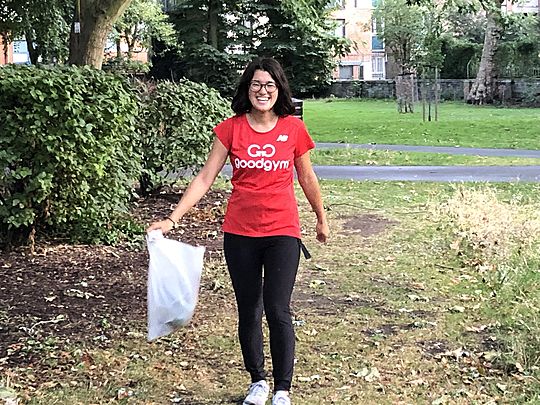 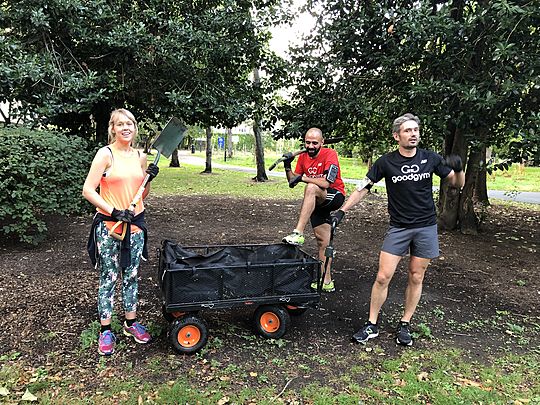 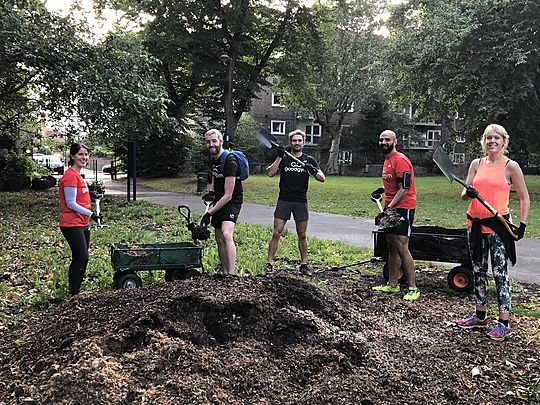 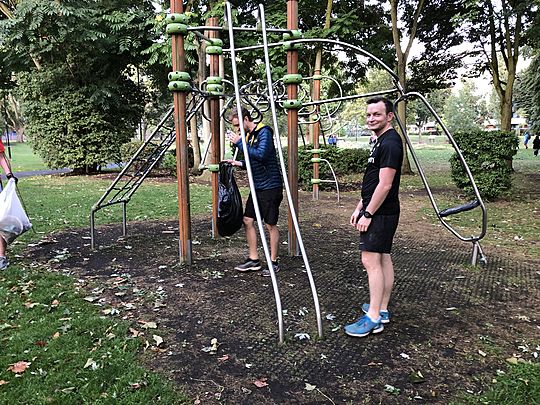 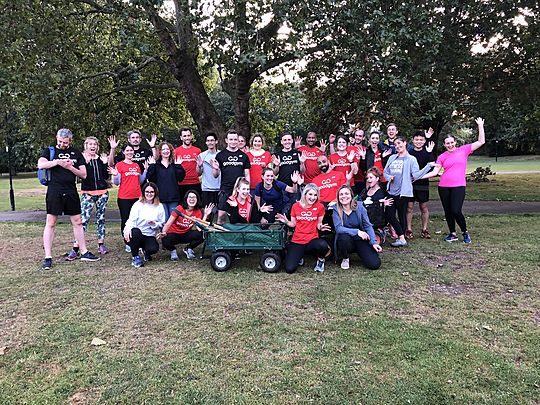 Rain, rain, are you gonna go away?

…No? Well we don’t care because we’re GoodGymers and we run and task whatever the weather.

Yes, a good sized group of 26 runners gathered together for tonight’s two-task effort…

Task force members Bryon and Lieke had come to the rescue to head up a smaller operation, a new task brilliantly organised at late notice by our regular runner Nikki, helping to prepare and pretty a green space in advance of a new community fun day.

5 runners headed up towards Whitechapel to help offer a makeover to a little green space next to neighbouring Brady Arts & Community Centre, as local teams help to create a Dream Garden ahead of a Community Fun Day.

Meanwhile, myself and the remaining runners headed to beautiful Meath Gardens, where Joanna and Jane met us with the usual warmest of welcomes, and some beautifully planned tasks. We were staking shrubs, and litter picking, and moving mulch in a huge two-team operation.

The runners were dispatched to all four corners of the park working at usual lightning speed (no actual lightning, tho, as the weather had significantly improved, much to our relief).

And before 8, the team from Brady Arts Centre had arrived, and, I’m guessing you’re gonna know their answer to this question I put to them: “Now, would you like to chill for a minute before we start the fitness, or do you want to join the litter-pickers?” And so we had a big crew finishing the litter-picking with not one un-used bin liner left by the end of the evening.

And so we said our goodbyes and headed to the centre of the park for tonight’s balance and agility workout session.

This was a combination of agility drills and some balance moves, all doubling up to work lower body in preparation for the Autumn race season, and general summer mileage.

The runners were great. They blitzed all the moves, with seriousness and dedication, and this shows in their improved balance: a reverse-lunge-to-single-leg-deadlift following multiple hopscotch laps is no mean feat. Unless you’re a Tower Hamlets GoodGymer who’s consistently worked on their balance, in which case it’s a walk in the park. Literally.

And then we were stretching, tonight tackling in particular our tight ITBs and TFLs, to hopefully show hips and knees some TLC for the week.

A massive warm GG welcome to our first time runners,Lucy and Hannah. You did so much! You worked so hard! And you were so much fun. Thank you both for your vast contributions and we hope very much to see you again soon.

Thanks from us all to Nikki for setting up and organising a brilliant new task, and for putting us in touch with some wonderful community partners over the months. And thank you to task force members Bryon and Lieke who came forward last week to lead this task and enable it to happen.

A big shout-out to tonight’s back markers Charlotte and Becky who kept us all together at great distance tonight, as we headed out at a speedy pace.

And a big shout out too to Chris who jumped in and led a faster group back to the hotel after our run.

We’re able to offer multiple running speeds, so we really can cater to all running abilities, thanks to wonderful runners like those mentioned above.

And thanks to Chi and Nikki for great pics, and, to finish today, a huge shout out and appreciative pat on the back to Si, who recently reached 50 good deeds, in a pretty short space of time and who contributes a lot to the Tower Hamlets group.

Right, nearly there… But before we head off, two things that must go on your radar…

• Next week, 19th August, on Monday’s run we’re a two-task crew again, heading to a wonderful new task at participatory arts and education charity Stitches in Time, while a second team will be returning to Hollybush to help Margaret and Michael with some more SOS summer gardening tasks. Come and join in the fun, we’d really love to see you!

• And on Sunday August 25th, new Camden trainer Simon is leading a brilliant GoodGym run, a tour of the Docklands, with a pace that’s do-able for pretty much every runner, with a choice of distance. So, if you’re planning on some Bank Holiday mileage and fancy a bit of company, this one’s for you.

Have a great week, everyone, and hope to see you soon.