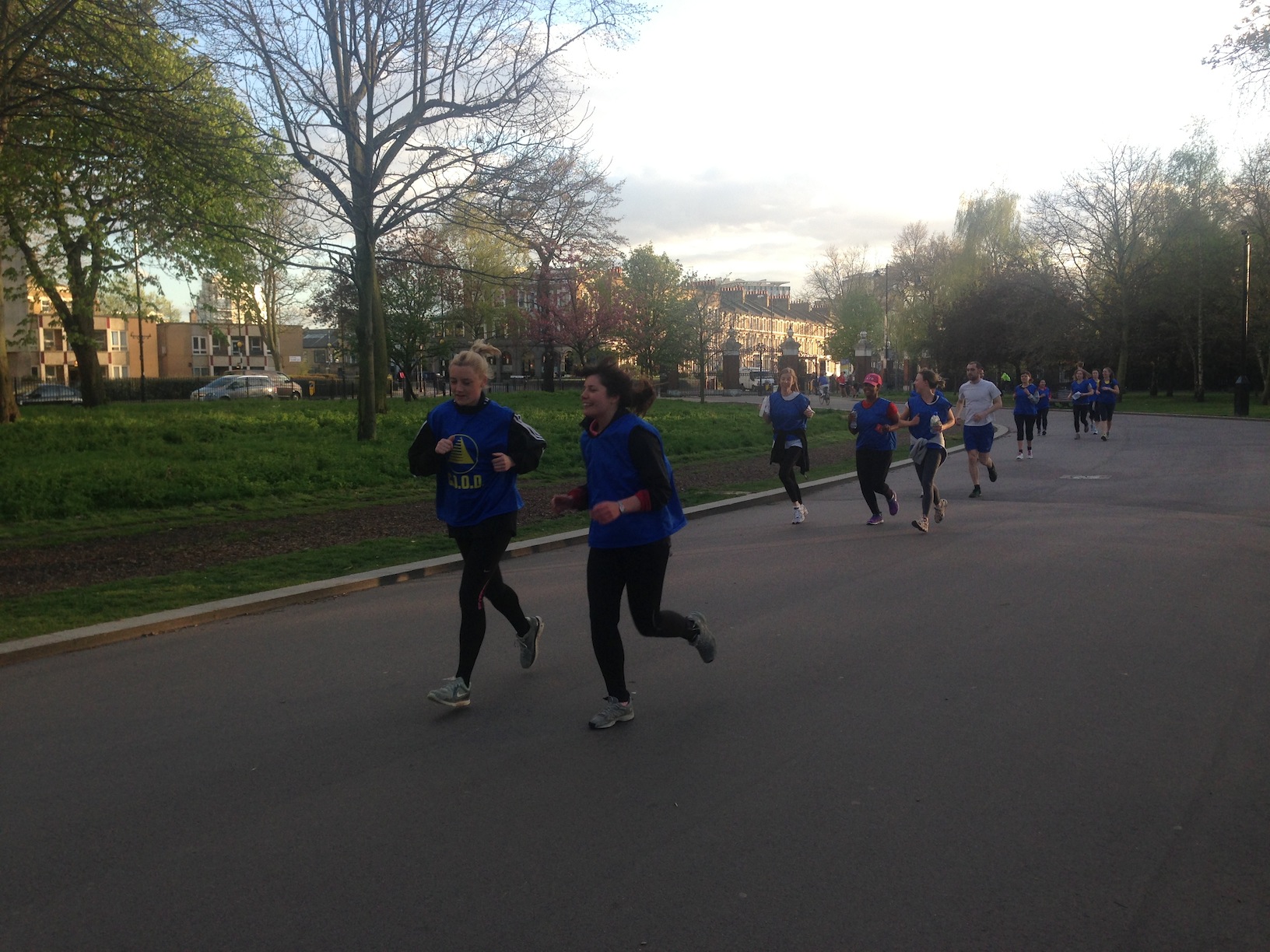 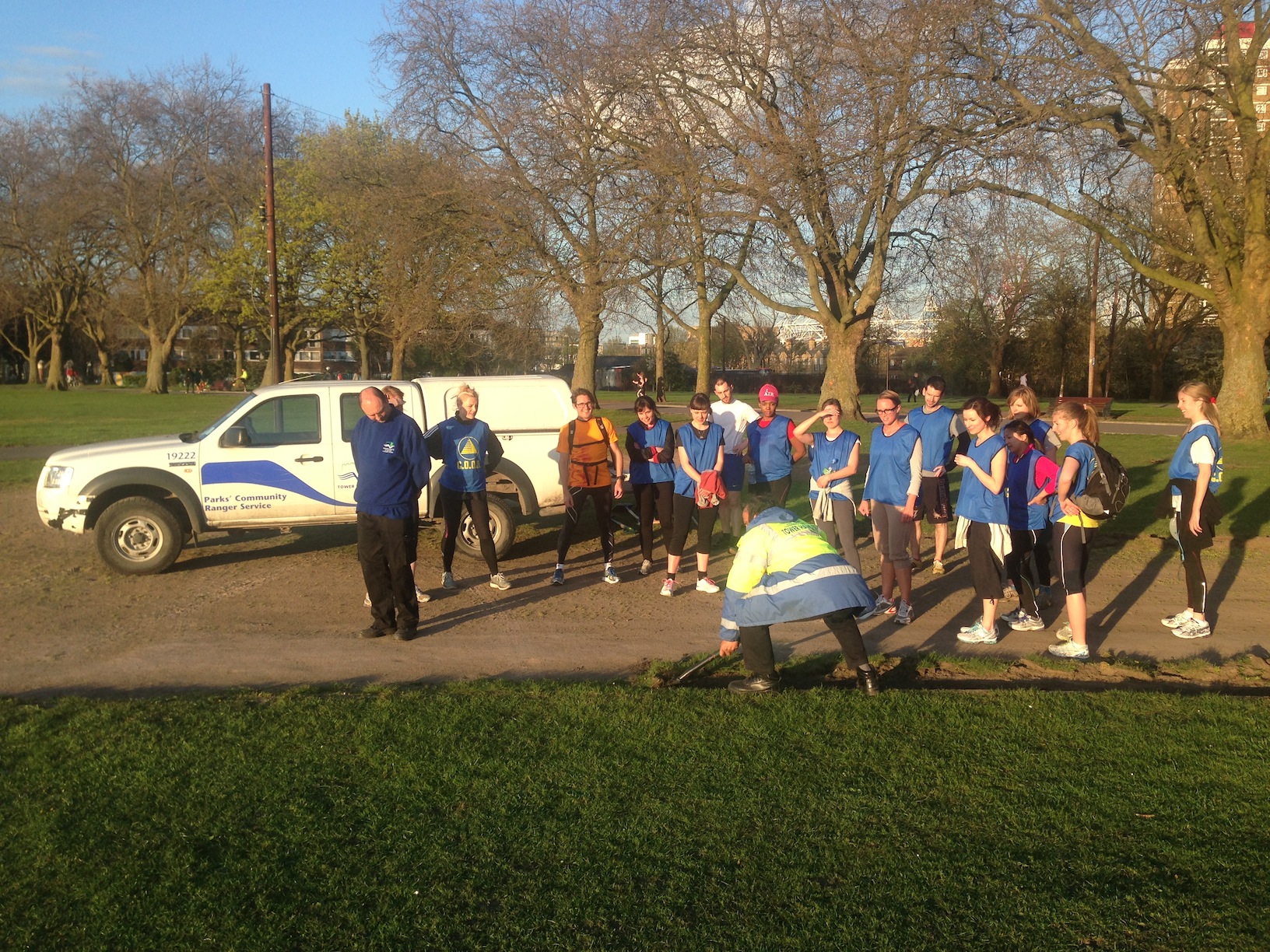 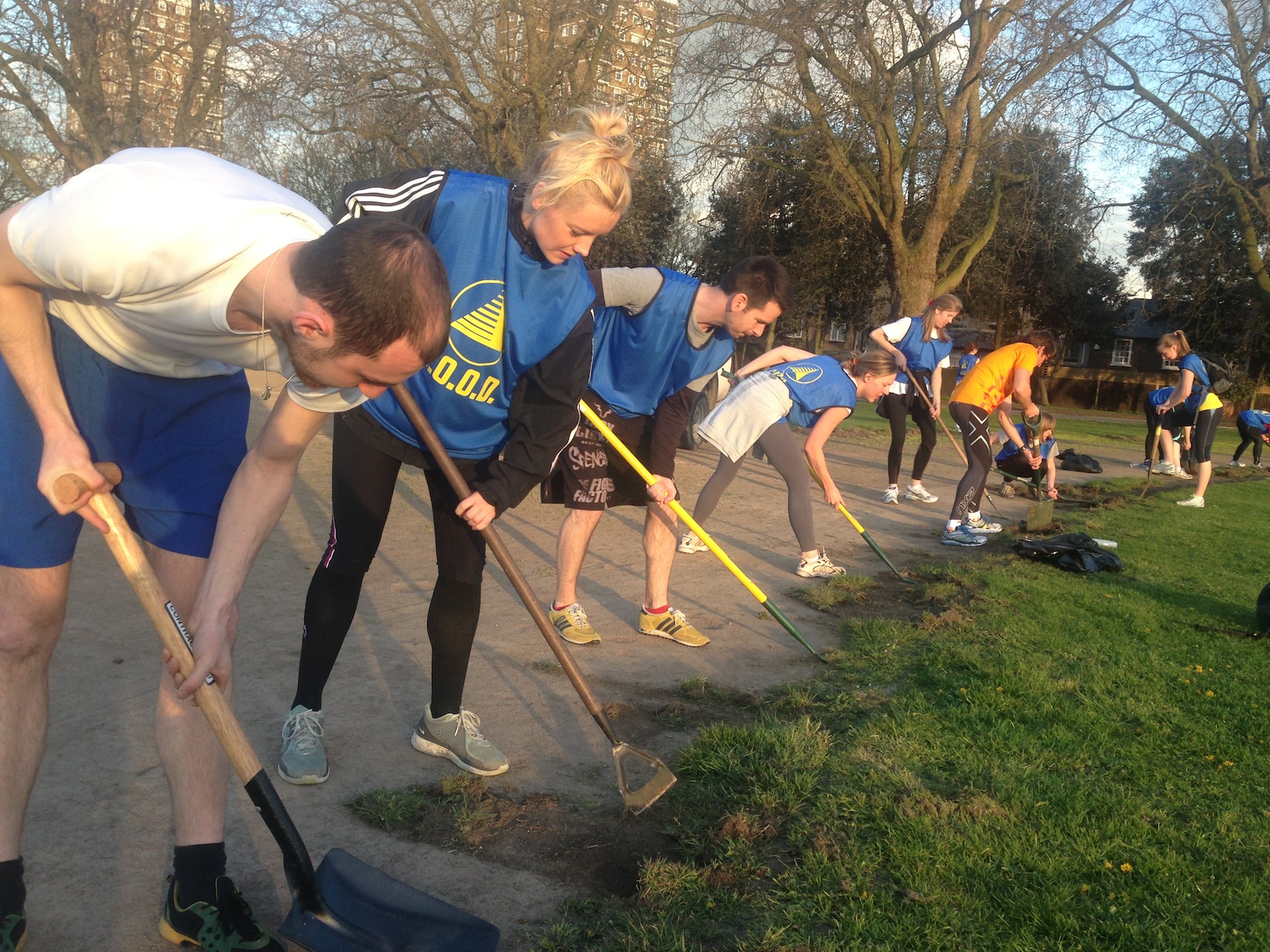 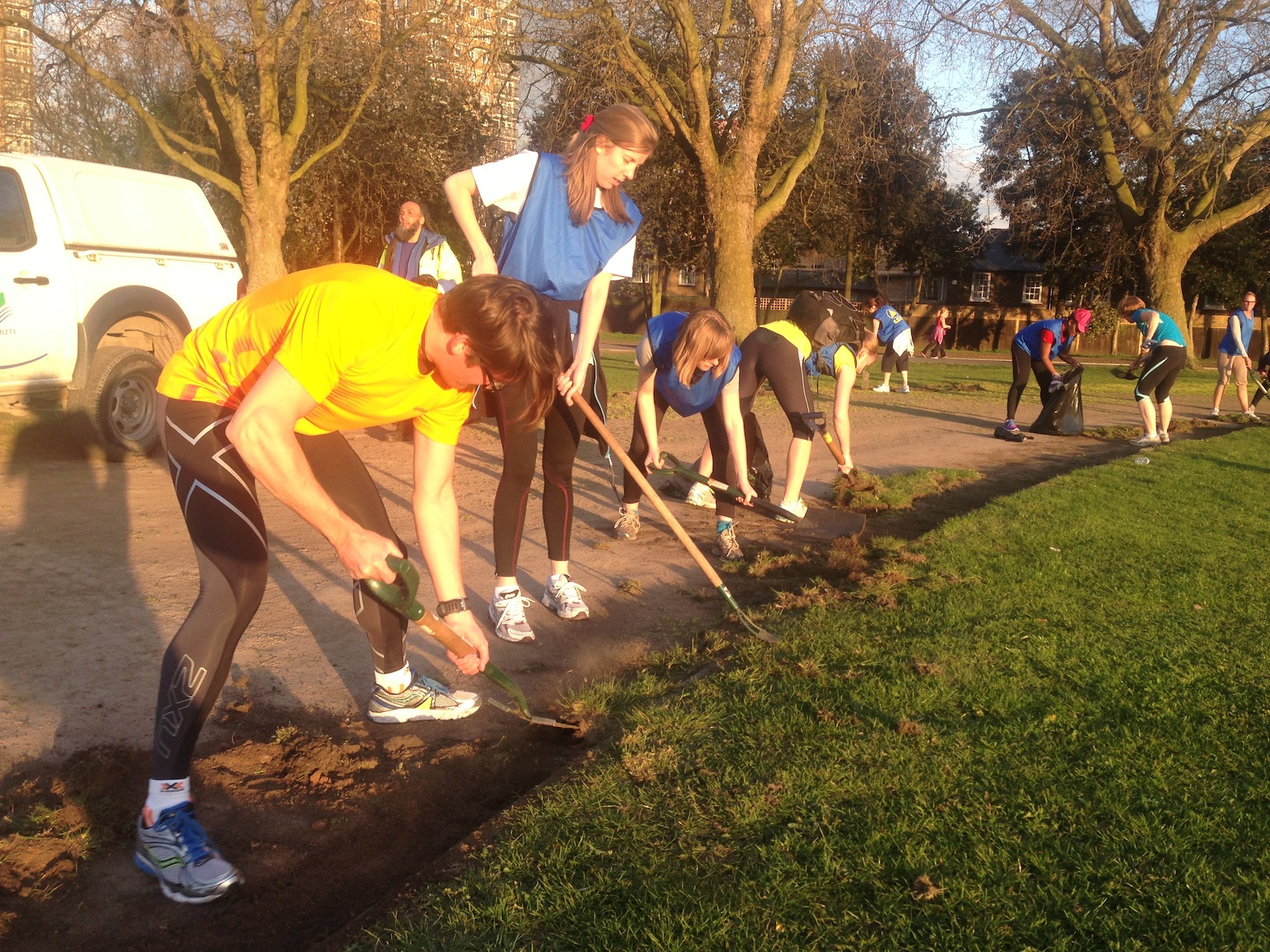 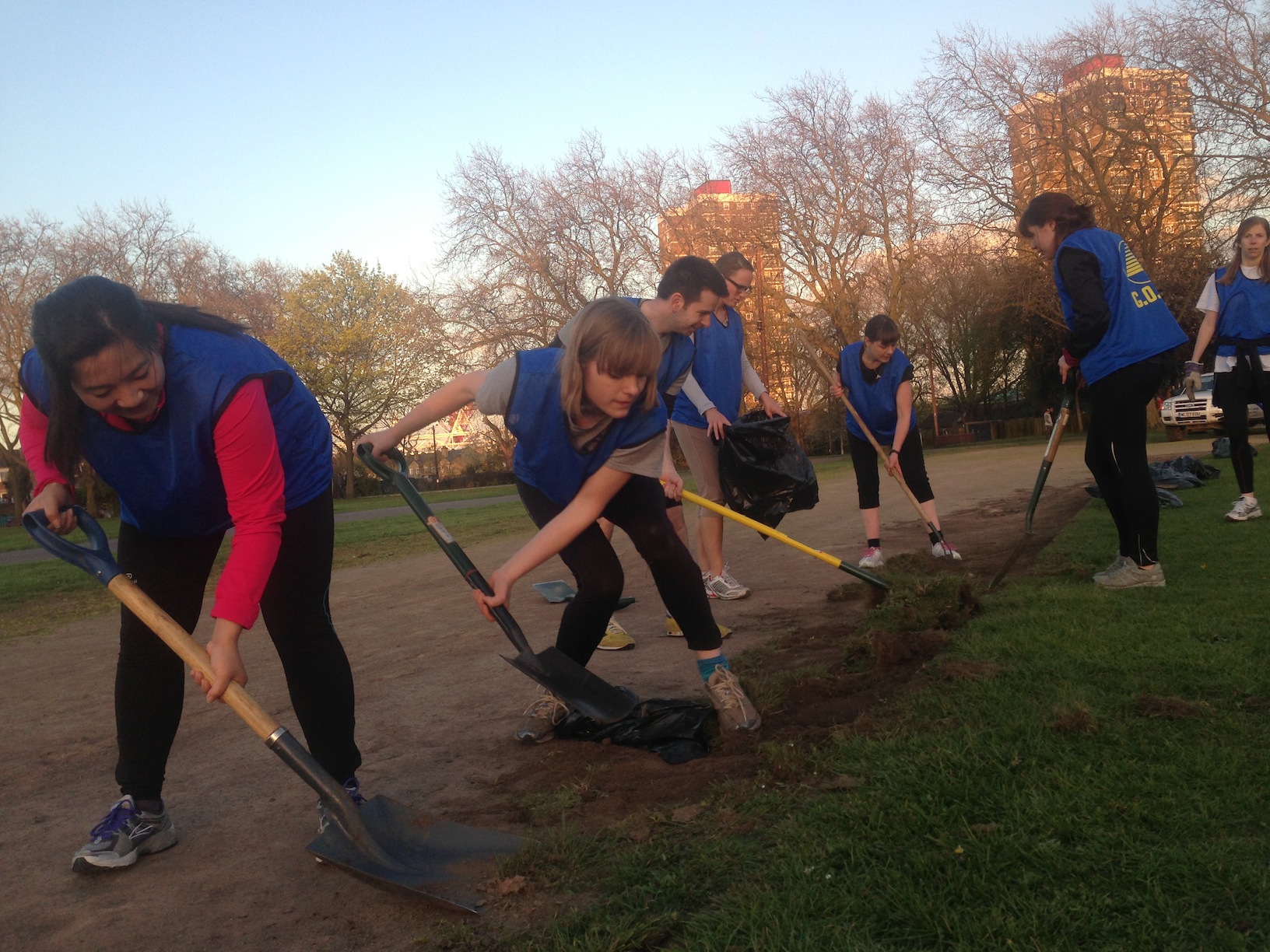 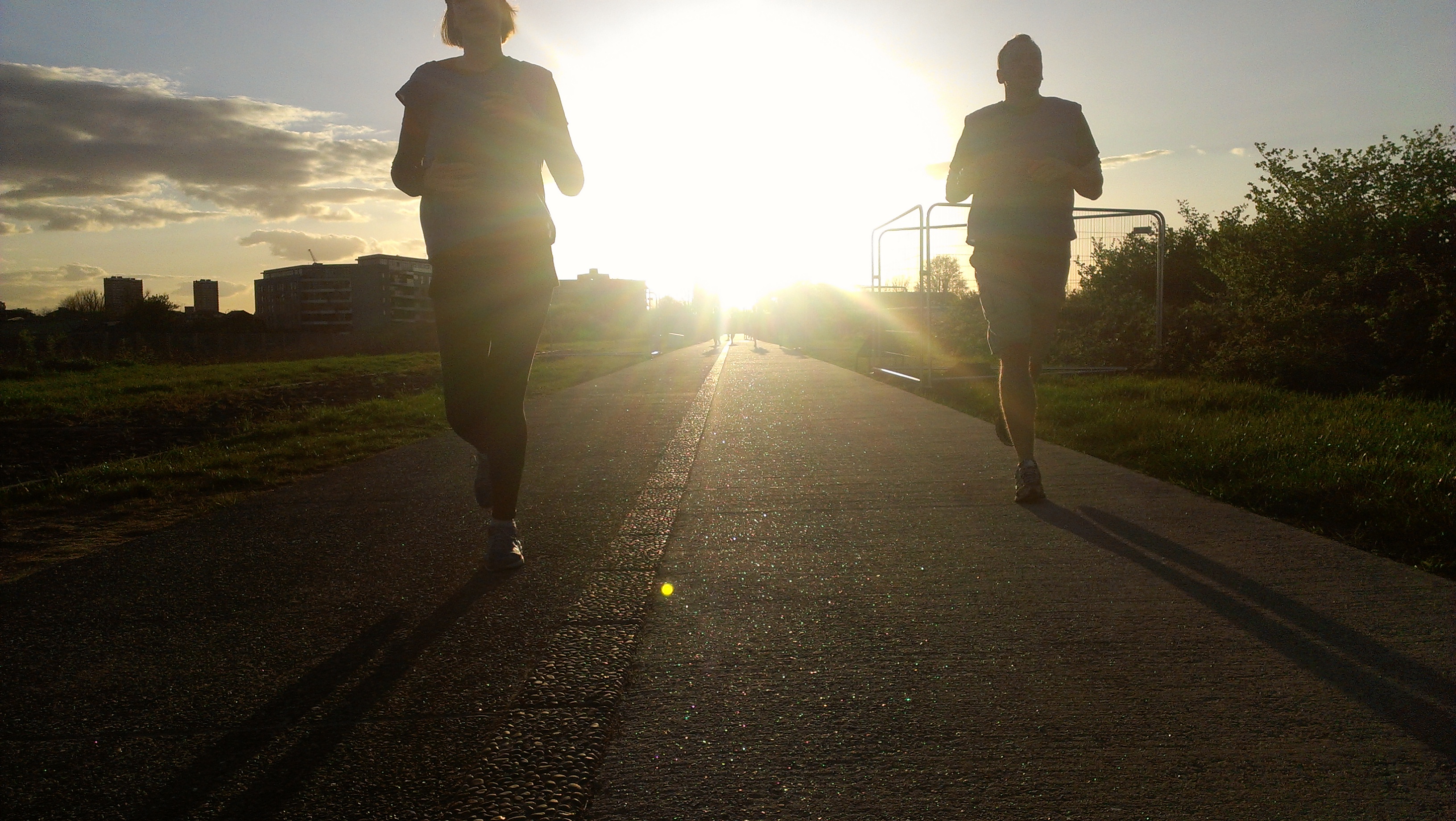 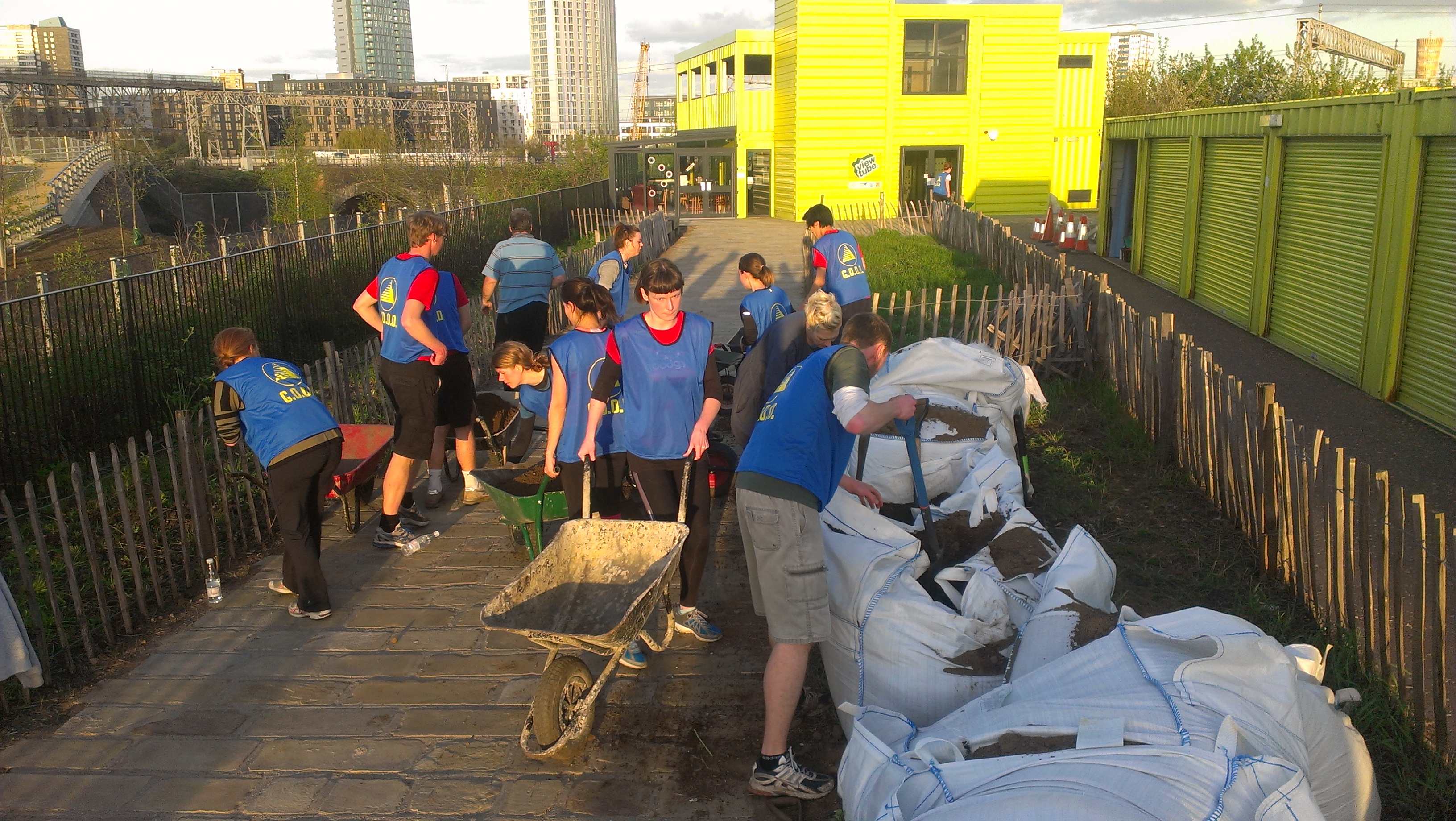 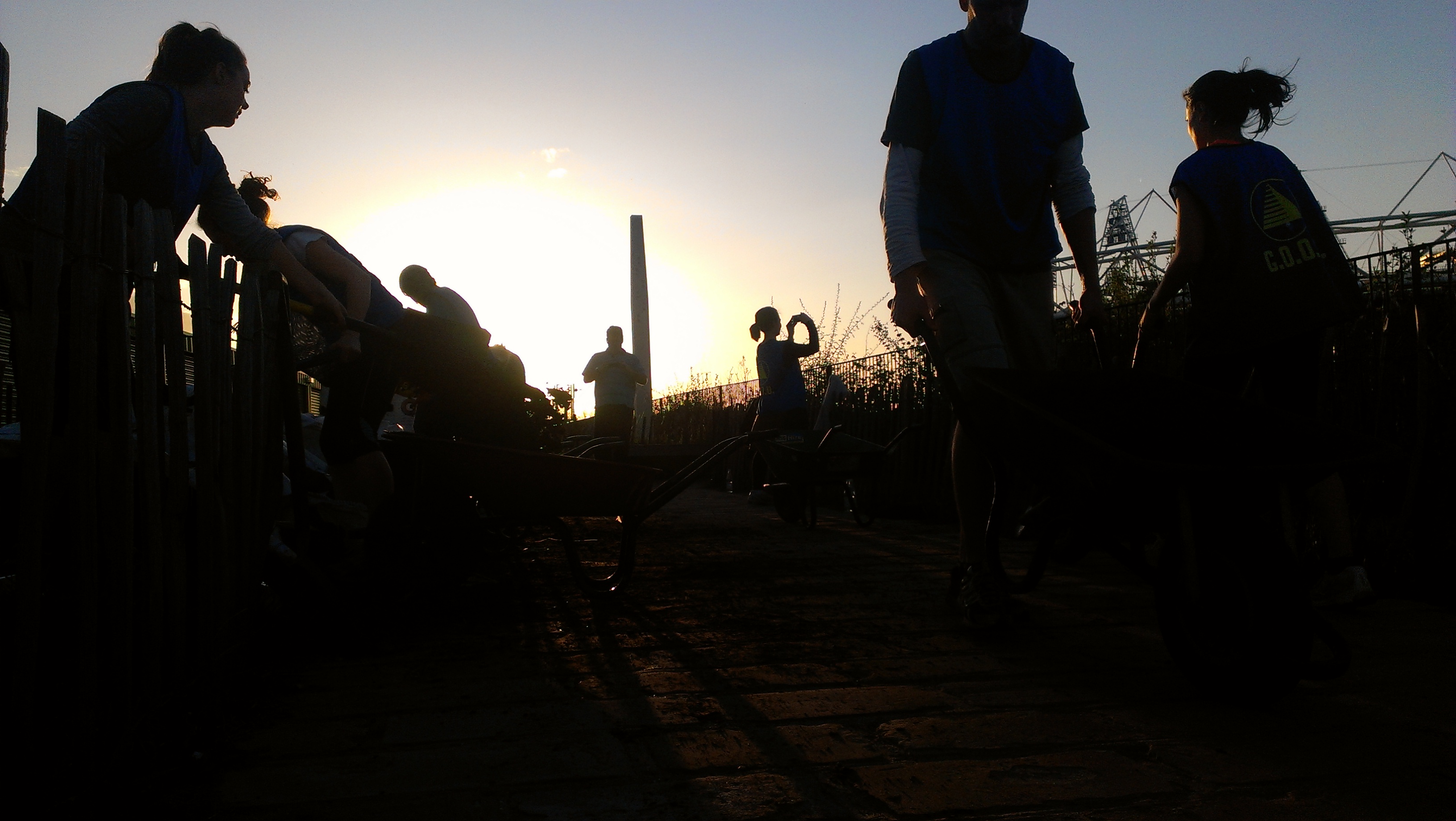 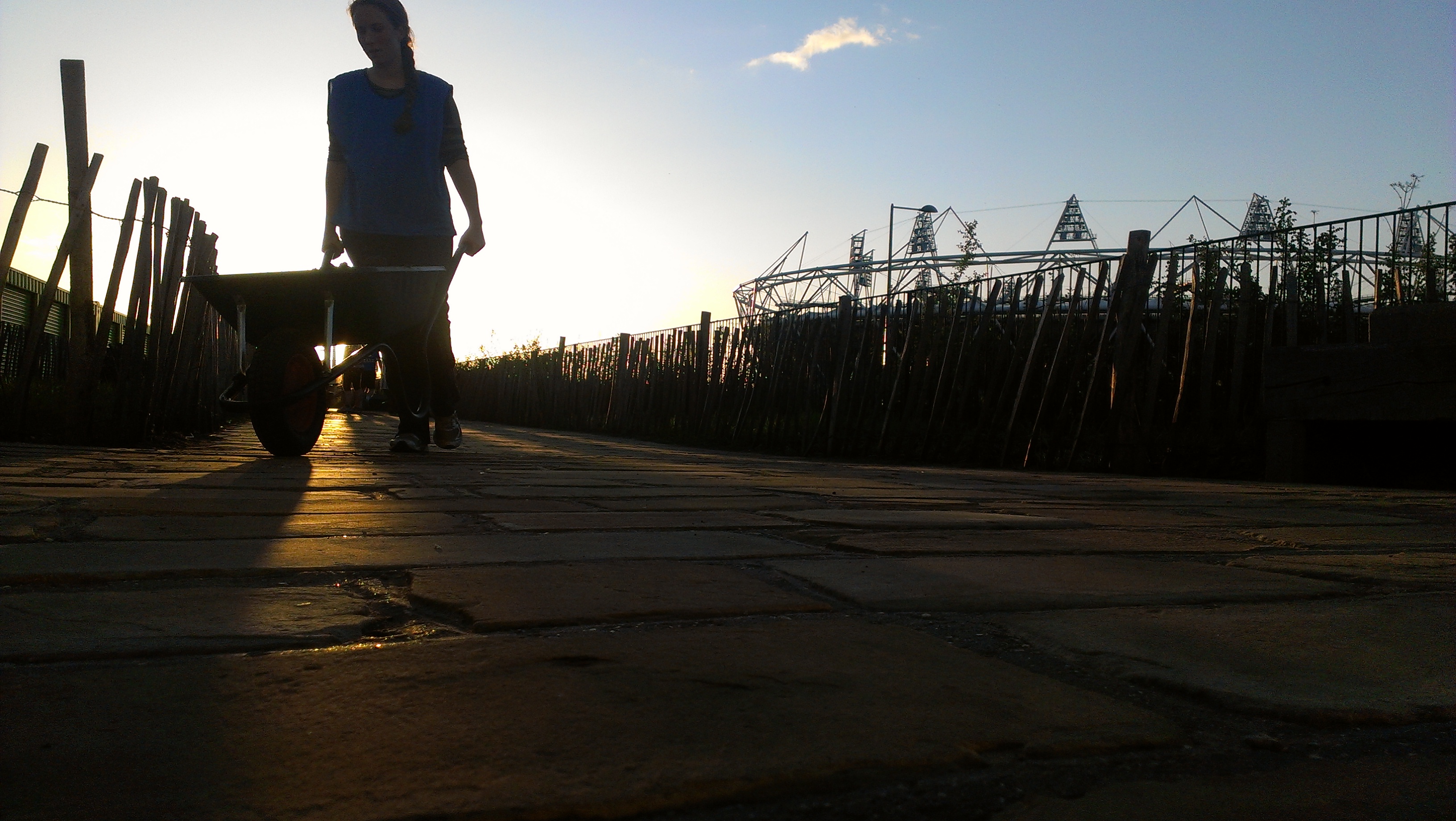 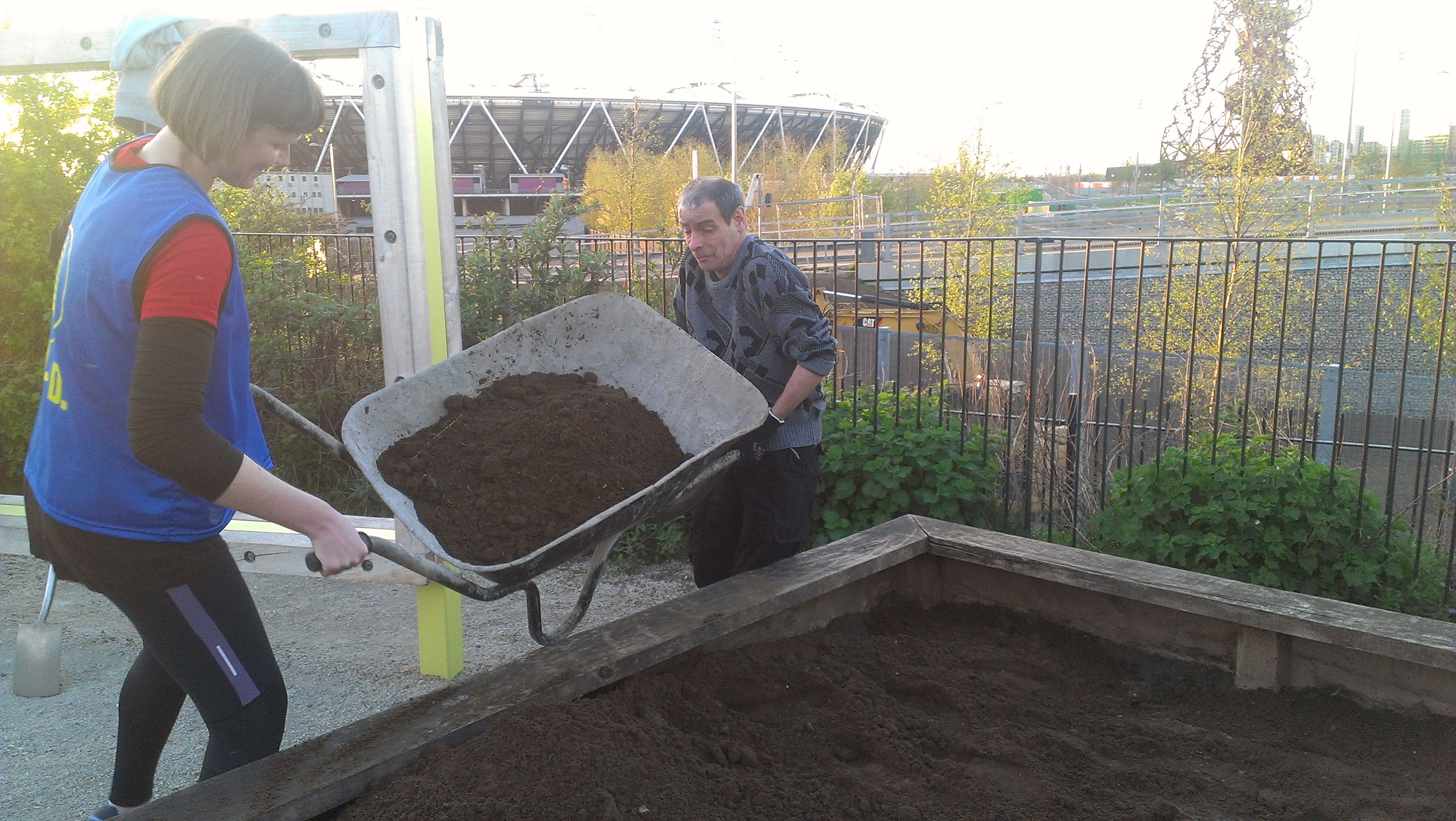 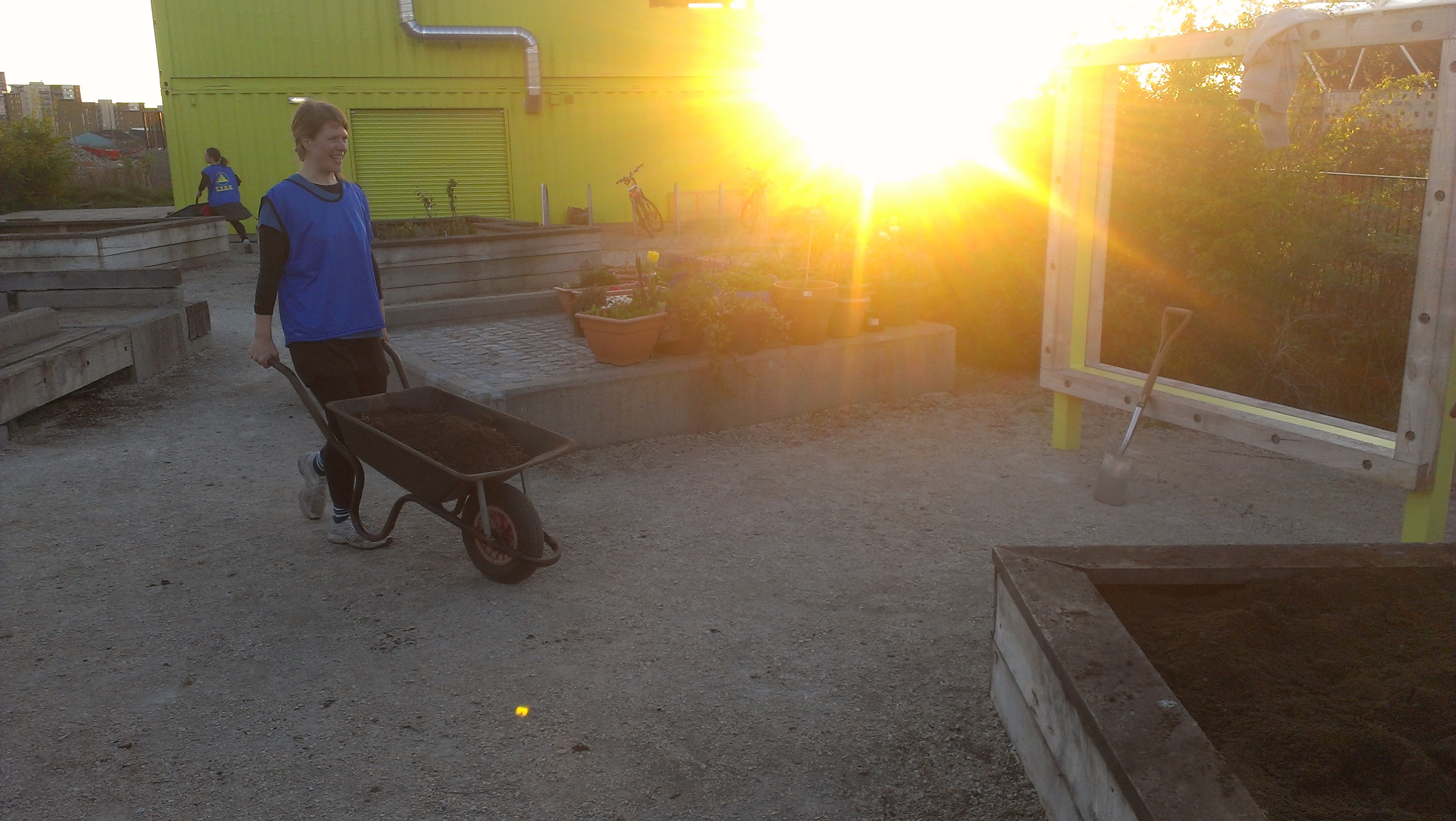 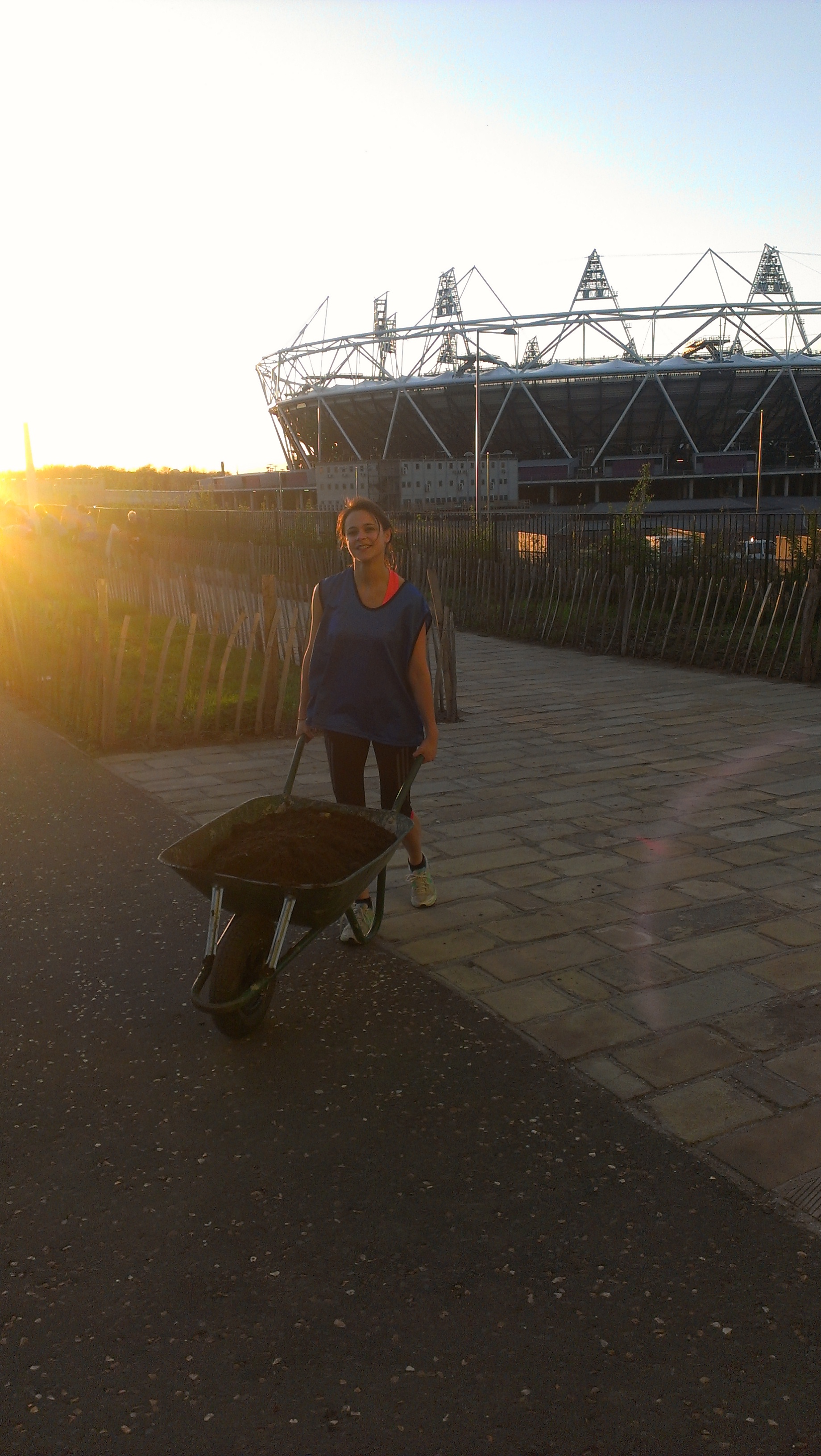 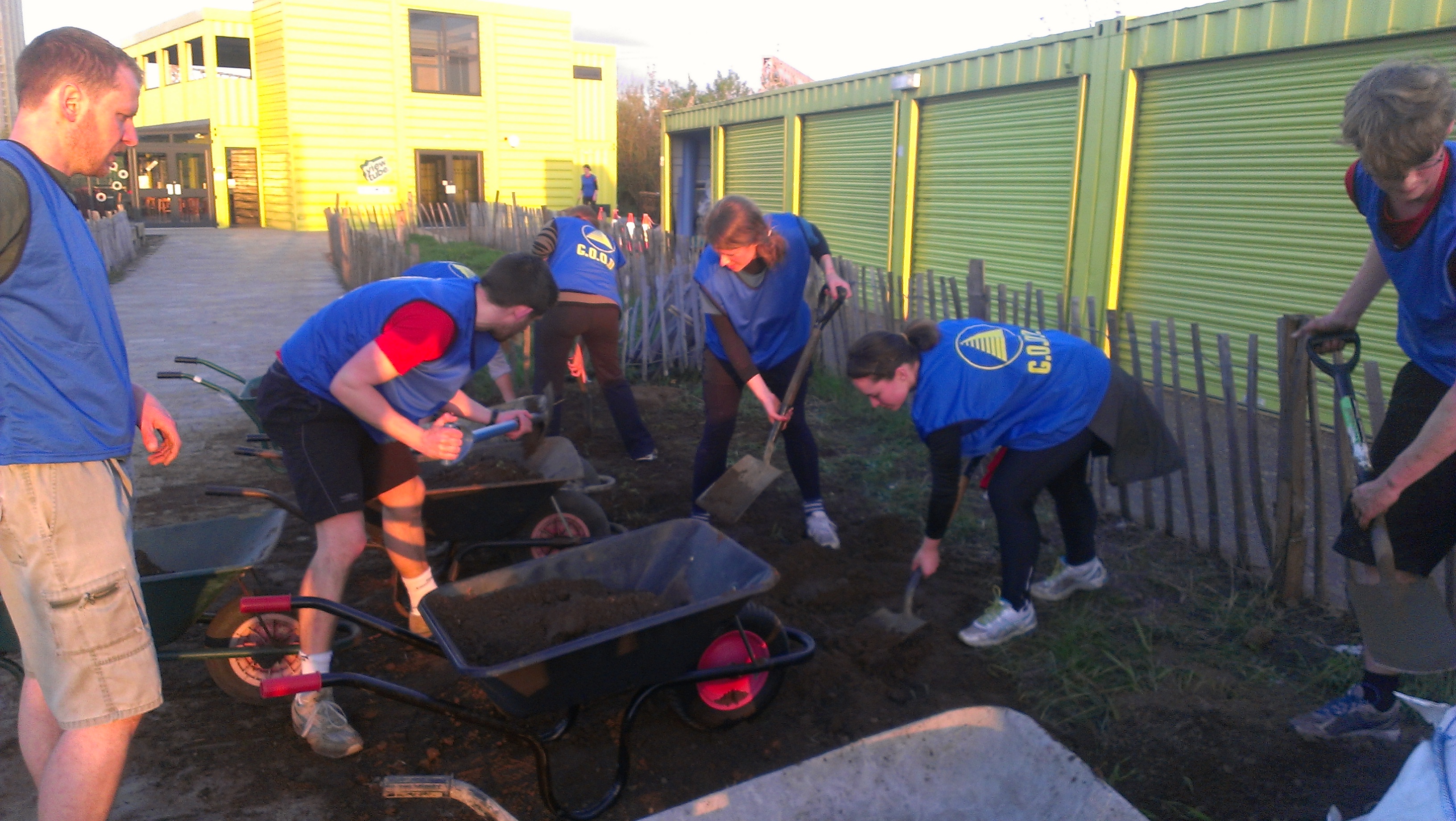 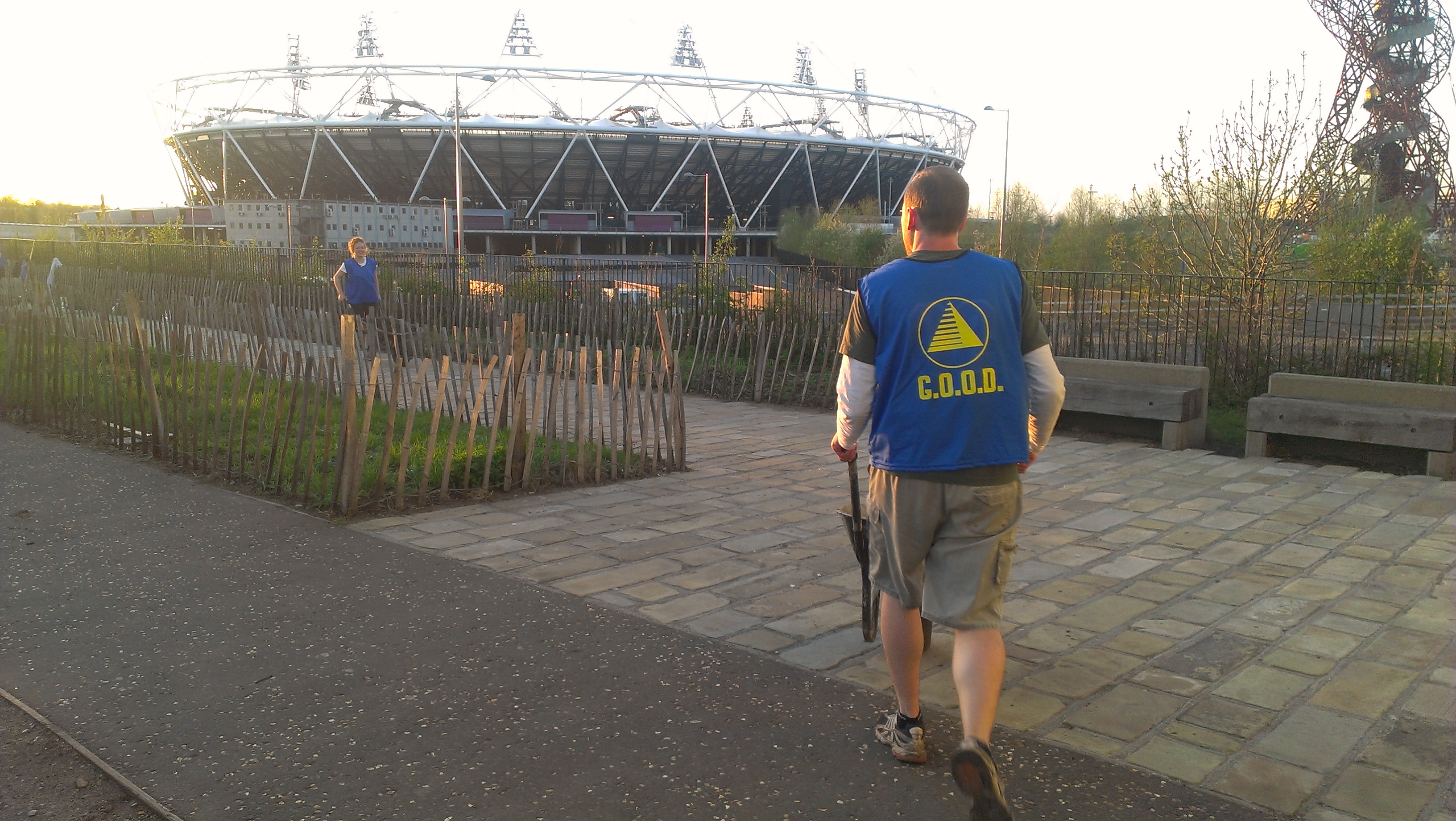 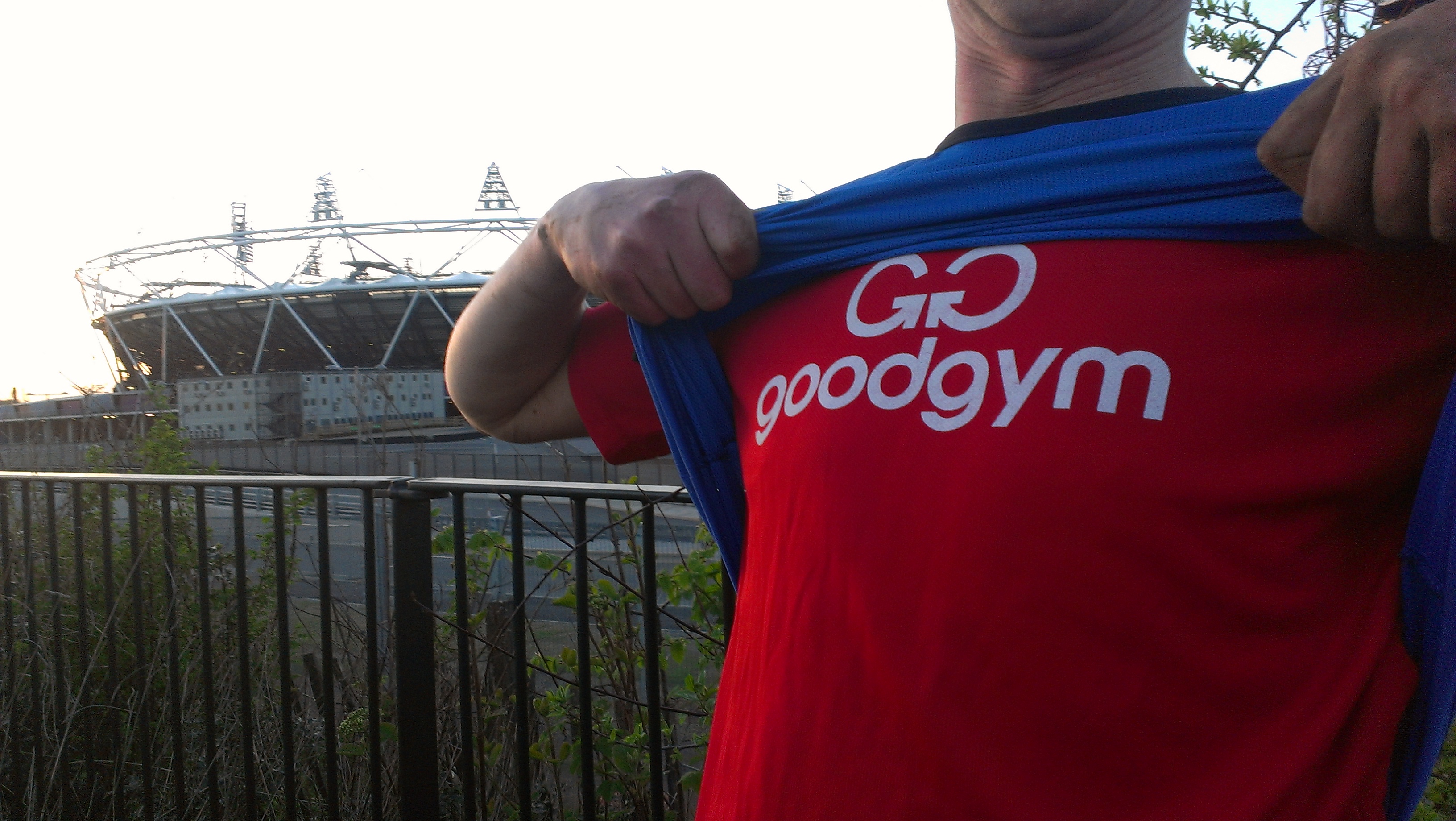 Another Monday crowd gathered at the Arch Gallery last night, ready to tackle two separate missions. One task was to redefine the edge of Victoria Park's running track, the other was shifting some compost for the View Tube. The runners milled about chatting and considered whether cleaning the ceiling (up to 7m high in places) of the Arch Gallery could be a possible future task...

The Victoria Park team set off at a pace of 6 min/km and ran straight down Bishop's Way and into the park at Bonner Gate. We skirted the edge of the park, sprinting with flyers to catch any runners who had shot us confused or interested looks, and of course some runners who hadn't.

At the far end of the park, after our 2.2k warm up run, we met the park rangers called Dean and Mark who talked us through the main work out: using spades and hoes to clear grassy patches from the running track, and crisping up the edges to redefine the boundary.

"We'd cleared so much that the truck couldn't cope"

We worked for 45mins, bagging up the waste as we went, and as a final weightlifting sessions loaded the bags into the rangers' truck. We'd cleared so much that the truck couldn't cope with the weight, so the rangers said they'd be back tomorrow to pick up the rest, thanked us and we set off back to the Arch at a warm down pace of 7:15 mins/km.

Last night's longer run took us through the familiar environs of Victoria Park where we were ahead of our planned 5.30 / km pace - we ran passed the running track where the other group had planned to be meeting.

We ducked under the A11 and headed straight for the Greenway, the sun flooded across the concrete and we raced towards the View Tube. On arrival there were a fine array of barrows and spades waiting for us. The View Tube (a community org connected to Bromley By Bow Centre) are creating a veg and herb growing garden at the back of their site. We needed to shift 8 tons of topsoil into the beds and set ourselves 45 mins in which to get the job done.

We worked fast. Will slashed open the bags and the barrows were quickly filled with their skilled drivers running them back and forth to the beds. The sun was setting behind us on the GreenWay and our team of 12 working with 4 of the community centre's service users dug in and managed to get the whole 8 tons shifted in 35 minutes. A GoodGym world record for earth shifting, and beating Camden's 6 tonnes in an hour.

"A GoodGym world record for earth shifting, and beating Camden's 6 tonnes in an hour."

A sprint along the Green Way, which was opened just for us, our own private running track, woke us up again and we eased off running through last of the evening light back to the Arch gallery for some well-earned stretching.

For my first run with GoodGym, Ivo showed no mercy at all. We ran to our destination at a speedy 5.30 minutes / kilometre, through the streets of Hackney, round Victoria Park, down the greenway to the Olympics Site’s View Tube. I ‘decided’ to keep the backbencher company, at the same time admiring the wonderful display of runners in their G.O.O.D uniform, doing their duty as is required of young healthy citizens.*

Revitalised by bottles of water kindly provided by our View Tube hosts, we set to work on our task of shifting some rather large bags of compost. They had even drafted in extra wheelbarrows especially for us, ensuring the fluidity and speed of shoveling, barrowing and dumping. The group photo would capture not only the sun setting over the Olympic Stadium, but grins on our faces from the satisfaction of shifting 8 tonnes in 35 minutes.