Amy cheered by other people 25 times. 🥇

Amy cheered by other people 25 times.

Amy is part of a crowd that's making a huge noise. Amy has been cheered by 25 people - that's a round of applause just on their own. We hope they keep it up. 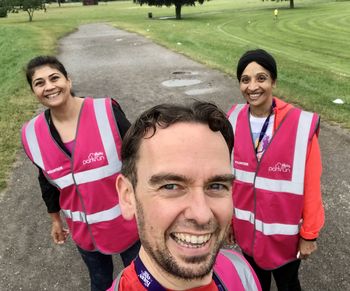 Amy went on a group run

Tonight we welcomed big Steve Dunsby to GG Brum for the first time! He's one of my mates, yes believe or not I do have some!

Liam took on the run leader role tonight, taking us on a good 4k route, before arriving back in time for the World Cup match between England and Wales.

We had a good night and England put in a great 2nd half performance to beat the Welsh 3-0 and set up a last 16 tie against Senegal on Sunday.

This week we had 5 volunteers helping parkrun happen across Birmingham. Raull helped out at Perry Hall, while Miriam, Ryan, Amy and myself helped out at Edgbaston Reservoir.

Amy signed up to a group run.

It will help if England win!!!!

Amy has helped keep other people motivated, Amy has noticed what others have done and cheered 10 people. We doff our caps to you Amy.

Amy has done 10 good deeds. They are a trusted GoodGym runner and are now eligible to join their local TaskForce.

This week 5 goodgymers helped with the COBS takeover at Edgbaston Reservoir. Richard was in charge of first timers and helped with barcode scanning after he ran, with Ryan, Amy and Amy taking up the marshal positions around the course. Great work by everyone to help make sure the event ran smoothly, and providing plenty of encouragement to the participants!

Tonight we had a fantastic turnout as 10 GoodGymer's helped out Narthex at Sparkhill Clothes Bank.

This included 5 new GoodGymers Rose, Isabella, Samuel, Klyne and Ariel which was amazing - give them a cheer!

We were greeted by Beks who gave us a great introduction and highlighted the really important work that Narthex undertake, including providing urgently needed clothes to people being discharged from hospital, victims of domestic violence and generally to people in need.

We helped with the clothes bank side of things today which comprised going through bags of donations and sorting them by items of clothing and size etc. It was a great collective effort and we managed to learn the ropes and sort through lots of bags of donated items.

Rose was a pro and was telling us how she runs a nationwide declutter and reselling agency which enables people on low incomes to make money from their clothes.

It was great to have Izzy and Sam along and they immediately got stuck in and diligently sorted through the clothes (and it was good to also have another member from the south coast, with Sam from sunny Bournemouth).

It was also great to have Klyne and Ariel along for the first time and they worked tirelessly on sorting through various bags of assorted clothes.

Sofeen and Louise equally worked hard and were also having a good bit of banter and sarcasm between them! Sofeen couldn't resist a characteristic photo with his biceps and Louise was great at advising people like me what various Ladies clothes sizes translated to in number form.

Tom was 'bearly awake' whilst sorting but doing a fantastic job and commented his mum would be impressed he was actually folding clothes!

Last but by no means least, Amy showed great sorting skills as she made her way through various bags and was great at organising piles for the different items and sized clothes.

We had a great time and look forward to getting involved with future missions.

Amy signed up to a community mission.

Amy and Ryan were at Edgy Rez this weekend, Amy timekeeping and Ryan at his usual spot! Meanwhile both Louise and Miriam were at Cannon Hill on the funnel.

Where a flurry of beautiful orange leaves 🍂 fell like confetti from the sky over the funnel!