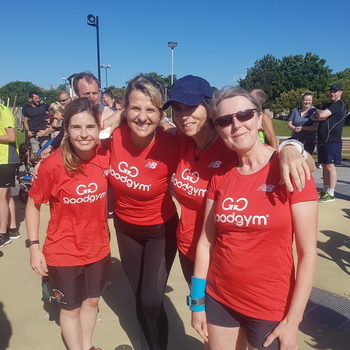 On yer bike, except for Jonathan

A bunch of goodgymmers descended on Ravenscourt Park gardens to help with deadheading, pruning rose bushes (which we thankfully got guidance on!) and trimming back the plants that had not been annihilated in the heat.

We went for our customary coffee afterwards, which involved a back and forth until we found somewhere that offered a bounty of sweety goods!

Welcome to our friends from Hounslow and a welcome back to Eloise, who we do not get to see as often as we would like!

A couple of weeks ago two GoodGymers from Ealing visited Ms A to combat the intrusive vegetation in her garden. Despite that matters with ivy and the fig tree were settled, what was left behind was a messy battlefield. The thought of the pile of dead ivy in the middle of the garden was giving both GoodGymers insomnia, so they decided to sign up for another mission for Ms A to be absolved from their guilt.

On Saturday afternoon, after a cordial welcome by Ms A, Sevan and Kash, inspected the garden and realised that the interest due on the ivy pile had grown - there were new large fig tree branches on top of the heap! Ms A explained that her neighbour was not happy with the expansive fig tree, so she had to request professional help to cut most of the branches down.

Sevan and Kash broke into the task by breaking the smaller twigs from the branches and packing them immediately into small but sturdy black bags. The activity resulted in filling the garden with the pleasant smell of figs and a discussion about the superiority of fresh figs over the dried ones (or the other way around - depending on whether you support Kash's or Sevan's view).

While Sevan used his strength to break the branches, Kash cut the largest ones into smaller pieces with a saw. After the duo freed ivy at the bottom of the heap from the fig tree, they were loudly cheered by the entire Shepherd's Bush. The shouts and chants of encouragement continued while the GoodGymers packed the ivy into the bin bags, feeling a surge of extra motivation. The experience of being cheered as intensely as the Queens Park Rangers (or Middlesbrough) players would be was something a GoodGymer experiences once in a lifetime!

After having a little refreshment provided by Ms A, Kash and Sevan reported back to her with the results. Ms A examined the garden from the first-floor window and was delighted. She was very grateful and was looking forward to taking advantage of her newly cleared space and chilling out in the sun.

Someone get that plant a drink its parched!

Lets be honest, most of our green spaces are looking less than well.

However a bunch of our Goodgymmers emerged in the bright Saturday morning to help maintain some of the beds and sweep up some of the leaves and plants that hadn't made it!

Congrats to all for coming and to Meerav who was with us for the first time! Hope to see you again soon.

On Tuesday evening we managed to wrangle 8 goodgymmers down to Brook Green to help clear out and give a little life to the plants around the edges.

Getting an arm workout in carrying a whole bin of water, we helped rake up the dead grass and leaves littering the ground around the plants whilst giving every plant a solid soaking.

Unfortunately, the ice-cream shop did close an hour earlier than expected, however a cool beverage at the pub was certainly a good way to lift the spirits.

Thanks to all for coming!

Kash and Sevan arrived in Fulham after a long run from South Ealing, ready to dispatch any pesky paperwork that was troubling Ms B. She told us that it was more than she could handle by herself, so was looking forward to having our help.

As we arrived, Ms B's carers left for the day, so we got stuck in to her stack of correspondence, some of which were new and others a bit older. We went through the utility bills and insurance documents explaining what everything would cost and what was renewing, writing a summary in large red text on the envelope containing all of the letters. Finally, we wrote down some questions for Ms B's energy supplier for when she next calls them. Ms B appeared a bit lonely, so we stayed for a chat about her life and family, finding out about the interesting life experiences that she, her husband and her children had had.

We thought we'd completed the mission when we asked for a final time, if there was anything else that we could help with. Ms B said that there was one thing... she had been trying to remove the glass cover from the light fitting in the hall. We said we'd take a look and we dug out a step ladder from a cupboard. Once up on the ladder (not at the same time), Kash and I both gave it a wiggle but it wouldn't separate from the fitting's base. Kash and Sevan are not GoodGymmers who give up easily, so we pushed and prodded at it until one piece released. Huzzah! But then we were stuck again with some tiny bolts holding the glass in place. We tried all the tools to hand with no luck, so unfortunately we had to admit defeat on this part of the mission.

Despite still having most of the light fitting on her ceiling, Ms B was immensely grateful for the help we'd given and was clear on what the next steps were with her utility companies.

Weeding our way out of bind!

A muggy yet sunny day saw five GoodGymmers came together to help in the never ending battle against bind weed, which grew rampant over trees and bushes in parts of the Fulham Palace Gardens.

Setting about our work, we made our way up the beds, dodging sprinklers and nettles to get rid of the pesky invaders, enjoying a few blackberries that grew in the area. We also got to see some of the beds we had worked on earlier in the year, where a greater diversity of flowers and plants had grown as good sources of nectar and cover for many a small critter.

Afterwards, we grabbed a quick coffee/ cool drink from the Fulham Palace cafe and slowly put the world to rights as per usual before going to enjoy the rest of our weekends.