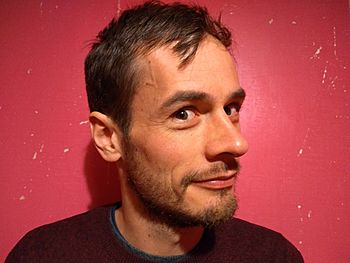 Matt and I met in Southwark to help rearrange furniture in order for Ms S to return home from hospital.

A person from the Red Cross met us outside her flat to let us in. Our main task was to move the bed and mattress from the bedroom to the living room so that it could be replaced with a hospital bed, which was in the living room.

After assessing the bed frame, we realised we didn't have the tools for the job so we started off with something else that needed doing - moving the armchair to a different space in the living room and taping down the rugs and carpet to make sure there were no tripping hazards for Ms S.

We returned to the bed to have a re-think about the best we could do in the situation and ended up taking the mattress off the bed as well as the slats so that the frame is easily accessible for dismantling, then balancing the mattress and slats against other objects in the living room for the time being until the frame can be removed.

Hopefully someone will be able to bring the tools needed to take the bed frame apart for Ms S so she can return home from hospital to her new bed soon.

So close and yet sofa

Tonight's mission was extremely local for Matt, and he turned down the offer of reps up and down the stairs on arrival. Instead Emma and Matt rearranged some furniture, took a mattress down and a mattress up the stairs, and now Mrs D has a safe home to come back to.

Shout! Get it all out.

A tricky job to remove a bed turned out to be super easy thanks to an emergency screwdriver. Despite a little shouting from a neighbour concerned we were fly tipping Mrs M now has space for her new bed.

We put our Heart and Soil into it!

Last night 25 runners ran 10km overall to Tabard Garden Allotmentsmaking it our highest ever average attendance in January, and our biggest group this year!! On the way to the task split into 2 groups to vary the pace, thanks to Sam and Girija for keeping the 2 groups together. After being held up by a few traffic lights, we made our way to the garden where Peter and Annawere waiting to instruct us with the tasks for the evening. We quickly split into 2 teams, the first group led by Stefan, Nate & Tom took wheelbarrows containing bags of manure (direct from our work at Surrey Docks Farm) and transported it to 'Beautiful Balin', garden another nearby community space looked after by the Tabard Growers. The second team armed with spades and forks got to work shoveling stubborn soil and roots into wheelbarrows, continuing the work we started before Christmas, to make a new planting bed ready for spring. Despite two wheelbarrows having broken wheels, the two Sams took care of the heavy lifting along with Paulin and Ben. Kim was the most keen to get her hands dirty, and Nelly summed up the evening with tonight's pun! In 30mins so much soil was cleared the bags were almost empty, ready for us to finish the job in a few weeks time!

FACT OF THE DAY Toponymy - is the study of place names, their origins, meanings, use and typology.

We made it back in good time, with some added sprints along the Surrey Canal, and lots of discussion about what was for dinner! Finishing of with a quick stretch and cool down.

Next week we'll be running 4km overall to the BRAND NEW Crisis store opening in Peckham! It is the day before they are due to open, so we will have exclusive access to help them get everthing ready! Followed by some fitness drills around Peckham Rye.

See you there team!

Matt Guy signed up to a group run
Group run

We're a friendly group of runners who combine running and volunteering with local charities and community projects in Southwark.

We meet in Peckham every week to get active and do a physical task.

Arrive at 18.45 this Wednesday in Old Spike Roastery, Peckham, you can store belongings there safely and we'll be back at the cafe at 20.30.

We're running 9km overall to Tabard Community Allotments working with a local community group to help tidy up some weeds and shift some soil. It's getting darker so bring along a headtorch!

GoodGym is for everyone. We welcome runners of all abilities and it is often possible to walk to the task if you would prefer. We always have a back-marker so no-one is left behind - we're about achieving something together so you'll always be welcome no matter what your pace is.

Big Shout to Sally for back marking and keeping the group together High-Five to Kim, Baljit & Coral who completed their first GoodGym run with us!

Last night 22 runners ran 8km in total to the Crisis store in Elephant and Castle.

The good news was that storm Brendan had passed, but it was still a chilly evening so we swiftly made our way up to Wallworth Road via Burgess Park. Once we arrived we met Emelia & Daniella who welcomed us into the store and showed us our tasks for the evening. We had one team meticulously rearranging the clothes rails getting everything into size order. A second team set up a production line organising stacks of CDs and DVDs, checking the products were in the right boxes, then making and sticking on labels. And a third group had the task of separating and re-organising all the single lone shoes from a jumbled pile, into categories of male, female, smart, casual and healed!

FACT OF THE DAY High heeled shoes were originally worn by men! As early as the 10th century, many horseback riding cultures wore heels on their boots and shoes to help stay in stirrups. When the Persian cavalry wore inch high heels, they became associated with the upper class, since they showed the wearer owned and maintained horses.

Everyone attacked each task enthusiastically with an eye for detail, as well as a bargain! And in only 30 minutes we got through so much stock, Emelia & Daniella were delighted and ready to have us back again!

Next week we will be running 7km to support the Salvation Army in Camberwell. It will also be GoodGym Southwarks 4th Birthday!! So we will celebrating with a drink or two next door!

See you there Team!

Its 2020! And kicking off the January Challenge we had 20 runners in our first Group of the new year in Southwark! We ran 5km overall to the drop-off collection for Christmas trees in the beautiful Telegraph Hill Park.

After a quick warm up shaking off the Christmas cobwebs, we made a zigzag route through Nunhead and into the border of Lewisham. With eagle eyes we spotted 5 large Christmas trees left beside the road and carried them as a team up the hill to the park.

Next up we played a game of heads or tails, letting luck decide whether to complete an easy or hard exercise! Despite a bit of confusion about the rules everyone took part energetically! We finished off with a hill sprint relay with Allie's team taking home the win!

FACT OF THE DAY Around 8 million Christmas trees are bought every year. When a 2 metre Christmas tree is recycled it will reduce the carbon footprint by 80% rather than ending up in landfill.

We looped once more around the outside of the park but didn't find any more discarded trees, so we headed back to BATCH who were kindly storing our stuff this week after a mishap with the keys to Old Spike!

The next group run is an additional start session this Saturday 11th. Starting at 9.45am at the Lodge Space Cafe next to Southwark Park, we will be running 2.5km in total to our friends at Galleywall Nature Reserve. Sign up here

Next week we will be running 8km in total to help out at Crisis store in Elephant and Castle. Sign up here