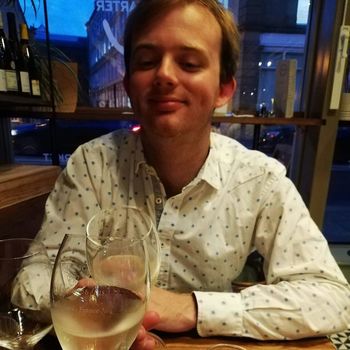 James has helped keep other people motivated, James has noticed what others have done and cheered 10 people. We doff our caps to you James.

Stung by a wasp on a swarm day

Today's task sounded like a nice thing to do on a sunny afternoon. When we arrived at the pond site, Anne, the task owner already had four sets consisting of a wheelbarrow, a rake and a fork arranged for us outside the storage container. We were asked to split up into pairs and start raking the semi-dry hay an pile it onto compost heaps. Laura and James went to rake close to the site entrance, Vicky and Barbara busied themselves around the space on the other side of the storage container and Ed and Amy went a little bit further up the path. Zinnie was running slightly late and when she arrived we both went to join Ed and Amy. When we arrived Ed just managed to escape a swarm of wasps. They followed him for good 20 metres as he unintentionally disturbed their nest while raking the cuttings along the meadow perimeter. Poor Ed was stung four times and left his fork near the nest. After a quick check that Ed is still fit and well to continue with the task we went to see if the fork could be retrieved. The wasps however were not giving it back and were swarming around it in large number. We decided to leave it to the first frost before coming back to retrieve it. This event sparked a conversation about wasps diet and we continued with the task.

After 40 minutes of raking and cuttings gathering we gathered back at the tools store for the group photo. Just before we left our location brave Zinnie retrieved the fork from the wasps possession. She cleverly used her rake to lift the fork by its handle while wasps weren't watching. Thanks to her feat we could happily say that no tool was left behind today.

We will be visiting Chapmans Pond in the near future, as there is more hay to rake and other tasks around the site that require completion before winter.

Bringing in the Hay

Friends of Chapmans Pond asked for our help with raking grass cuttings and transporting them to the compost heap.

Rakes, wheelbarrows etc. will be provided.

Armed with shovels, rakes and wheelbarrows they spent an hour spreading an initial generous layer, covering all of the ground around the equipment.

With several woodchip mounds left to clear, it's now ready for another team to visit in a few weeks time to make it at least twice as deep underneath the play equipment!

Kristina from the Council managed to arrange for a delivery of fresh bark chippings to the Ashton Park play area. The task will be to use the wheelbarrow(s) to move the chippings to where the play equipment is and spread them evenly creating a soft surface. We love bark chippings I said! Let's make it happen! Ah by the way, there may be odd weeding jobs too.

James completed a community mission. Instead of watching TV or lying in bed, James was out there making their community a better place to be. For making that choice they have earned the community cape.

James is a now a fully fledged GoodGym runner. They've just run to do good for the first time. They are out there making amazing things happen and getting fit at the same time.

Turn over a new leaf

We had a great turn out at today's session with Melissa and Tim coming back after a while and James, Georgina and Alys joining for the first time to see what GoodGym is all about. Give them ALL a BIG cheer!

We assembled by the park pavilion where we were welcomed by Emma from the Hut and Iain from the Council, who supplied all the tools, and plants for the task. I took the opportunity to present those of us who took part in the RunWithPride last month with colourful medals and without further ado we split up into two teams and went to work at two separate locations of the park.

The compost team were Nikki, Rich, James, Liz, Jenna, Mel and Laura got busy using the pitchforks and shovels to take all of the compost out of the three sided leaf composters, turn it and return it. Somebody had put grass cuttings in them too so the first job was to remove those into dumpy bags. The team found that the pitchforks were much more effective in removing the leaves which were fairly compacted. Shovelling it back in was also quite back breaking work after a while. Rich was particularly good at it. They finished the first set of compost bins in 40 mins so moved onto the second set which they managed to dig out and replace the top half of before the end of the hour.

Meanwhile the dig team went to the Hut garden and with the use of mattocks and spades took care of the soil inversion task. Iain brought few Clematis and other climbing plants which Abi carefully untwined from their bamboo frames before planting by the pergola. In few years’ time they should provide some shade for people sat under the pergola and flower in white and purple over the summer months. In just under one hour the team managed to make the area designed to become wildflower garden ready for seeding and put all climbers in the soil.

At 19:30 we were all ready for the fitness bit. Today’s session aimed to help improve our running speed. Following the warm up we did a number of short sprints/brisk walks interspersed with recovery jogs/walks. A warm down stretch followed and few bits of info about forthcoming community missions and the group run next Monday was shared with the group.

Next Monday we will be meeting at York CVS for the first group run since March last year. Hurray!

Emma from The Hut project and our very own Huw who is also involved with The Hut asked for help with revamping their garden space.

Tasks will include digging over a strip of ground then plant & stamp in wildflower seeds, general weeding and turning over leaf compost in the park composting bays.

It's an ideal task for a big team.

There will be a short fitness session after the task, so come prepared to do a bit of body weight exercise.

Tools and seeds will be provided by Iain from the Council.

Click this link for an exact meeting location on what3words ///rams.dive.truck

Bringing in the Hay