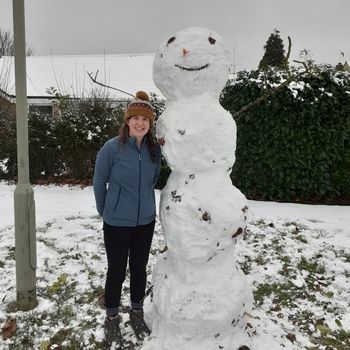 The Ark-T centre have a Summer Celebration event on Friday 15th July and have asked for some help getting the gardens ready.

They need some help sprucing up and installing some items in the playspace for the sensory garden, including putting together a solar-powered water feature. There are also some planters that need a bit of tlc, and some signs to be designed, painted and put up, a wigwam to paint in funky colours, plus we'll give the pathway a good sweep and scrub, trim the trees back, and tidy up the mud kitchen area.

As always, bring your gardening gloves, and if you're up for a bit of painting then wear clothes you don't mind getting some paint splatters on.

Meeting options:
* Anyone wishing to run to the task as a group please meet in the car park of the Richard Benson Hall, 276b Cowley Rd at 6pm. There won’t be a bag drop available but we can use the toilets there. It's a little over a mile to Ark-T from there.
* If you would prefer to meet at the task please meet us at 6:15pm at the Ark-T Centre playspace garden.

Marston Community Garden cooperative includes a community allotment, flower garden, the Forest Garden, a chicken coup, an orchard and a new Community Wood on New Marston Recreation Ground, plus much more. We have a few visits planned through the summer, so you'll be getting familiar with a lot of it!

This week we will be at the flower garden weeding existing beds and digging over more areas for planting.

Bring your gardening gloves. All tools will be provided.

Meeting locations:
If you would like to join a group run to the task location please meet at 5:45pm outside East Oxford Community Centre, Princes Street, OX4 1DD. Please note the community centre is now closed for redevelopment so we won’t have access for toilets etc. It is approximately 2 miles to Marston Community Allotment from there.
If you prefer to meet at the task meet at the Boults Lane Recreation Ground entrance to Court Farm Allotments at 6:15pm. OX3 0NT

A band of Good Gymers decided to utilize a beautiful Saturday afternoon/lunch to get their step counts up. Setting off from The Head of the River we walked alongside the Thames down to Iffley lock. As Oriel regatta was on we got a chance to see (and nearly be hit by) the rowers in action. After a brief stop for lunch at Meadow Lane Nature Reserve where both Katie and Holly's chocolates had liquified we walked back down the river and finished our walk on Christ Church meadow.

Merrily we walk along!

With Oriel regatta foiling our canoe plans- Holly, Hattie and I thought we could utilise a free Saturday for a meander along the Thames with a cheeky picnic/drink stop thrown in for good measure! Route is likely to be along the Thames to Iffley lock (maybe Aston’s Eyot too). We’ll be meeting outside The Head of the River at 11 am- bring a picnic!

That rare thing: a litter pick with not much litter!

A couple of years a go Port Meadow was a litter hot spot, with tonnes of litter being left on the meadow regularly. Since then the situation has improved, but as it's a SSSI, a scheduled ancient monument, and also home to cows and ponies, it's always worth a scout around to check that the litter isn't getting out of hand. With good weather forecast over the Jubilee weekend we thought that a lot of people might come to the meadow, and that might mean that there was a need for a clean-up this week. Of course, we all know that the long weekend was actually a bit of a wash out! Still, we turned up en masse to scour the river bank and favourite picnic spots just in case.

Julian Cooper, the Port Meadow ranger, met us at the gate with sturdy bags and litter pickers, and directed us to the areas he wanted us to check over. Half a dozen GoodGymers set off towards Burgess Field to clear up some hazardous broken glass, while the rest of the group pottered along the edge of the meadow, over the bridge to Fiddlers Island, and along the Thames Path past the boat yard.

Port Meadow was a Victorian rubbish dump, and bottle diggers take spades to it to search for potentially valuable Victorian or Edwardian glass bottles. Bottle digging is hazardous as the holes are rarely filled back in by the diggers, causing danger of 'trip' injury to humans and livestock, and it also disturbs glass and other Victorian waste below the surface exposing it and causing the risk of serious cuts. Livestock have died in the past from injuries caused by broken glass. The recent rain had brought more glass to the surface where bottle diggers had vandalised the meadow, and our breakaway group filled a bag with pieces of broken glass. Literal life savers.

Meanwhile the rest of our team meandered along the riverbank and across the meadow. We were surprised and delighted by how sparse the litter was. Aoife's crew, who headed over towards the boat yard were the only group who found significant quantities of litter. Other than that it was a few cans, wrappers, bottles, a blanket, but really not at all bad considering how it used to be. In fact, the situation was so decent that we called it a night a bit ahead of schedule which meant that we just escaped the downpour. Unfortunately, the hardy bunch who headed to The Medley for pizza afterwards got a thorough soaking alongside their dinner, but you can't win them all, and the pizza was worth it.

What's a GoodGymer to do when caught in the rain without a rain coat?! Kudos to Henry and Julia for taking part in this week's Project Runway challenge of making an outfit out of a spare litter bag. Garland of joy went to Louise - Happy Birthday for last week!

The 4 day weekend for the Platinum Jubilee will be enjoyed by many with picnicing and outdoor fun.

We'll be doing a post-bank holiday litter pick on Port Meadow to ensure that it is safe for the cows and horses which call it home.

We can go to The Medley for pizza afterwards if people are keen to grab some dinner.

Please bring your gardening gloves - they're always useful on litter picks. Bags and grabbers will be provided.

Non-runners meet us at Walton Well Road gate to Port Meadow at 6:15pm. Runners meet at West Oxford Community Centre on Botley Road at 6pm to run to the task.

Merrily we walk along!