Once upon a town centre

17 runners ran 4.0km to help the Maidenhead's Big Read in Windsor and Maidenhead. 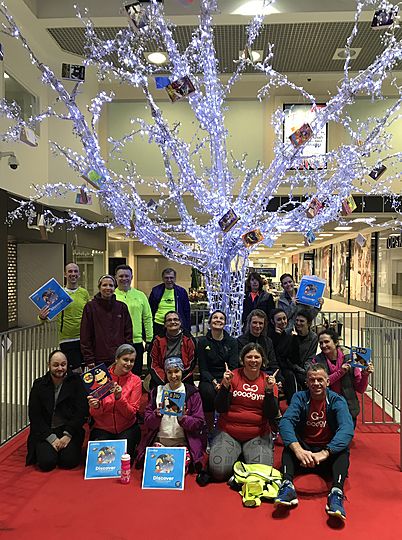 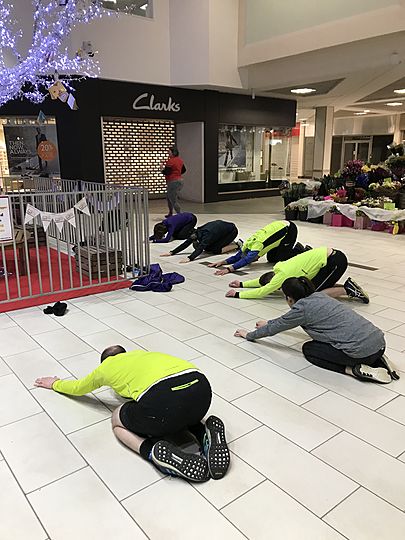 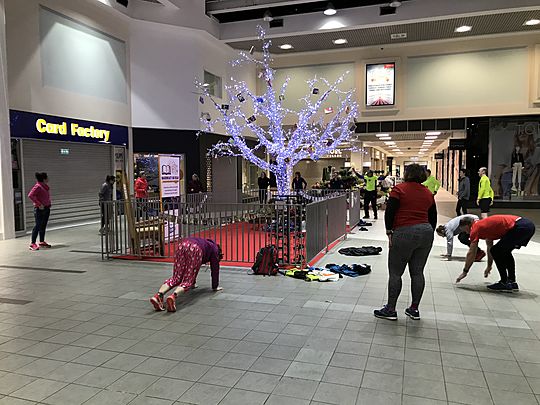 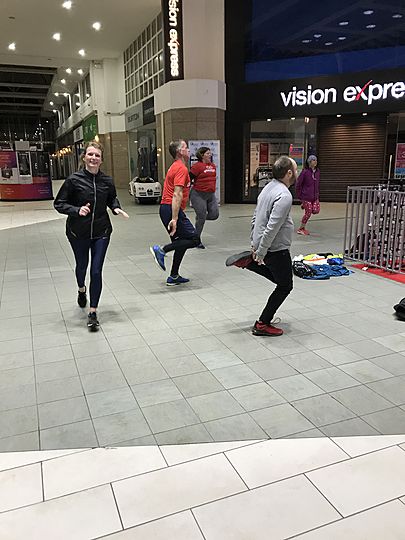 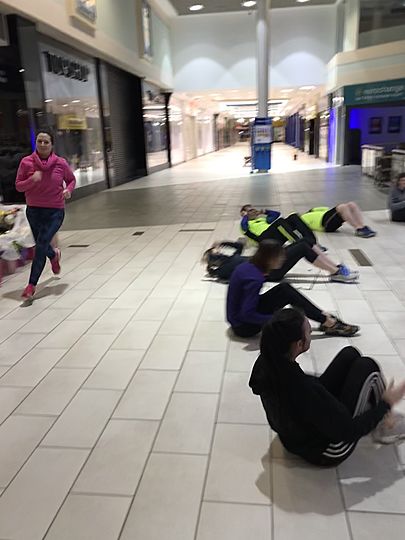 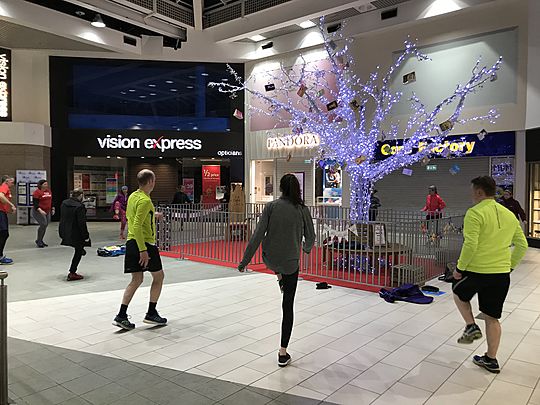 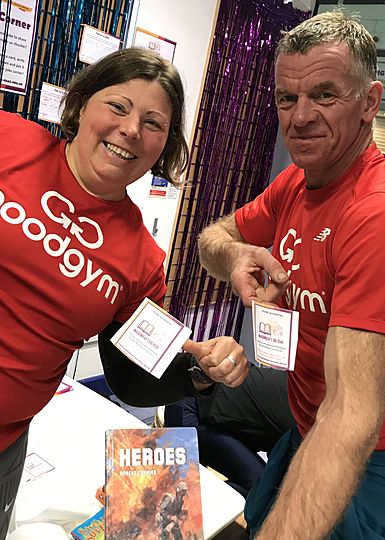 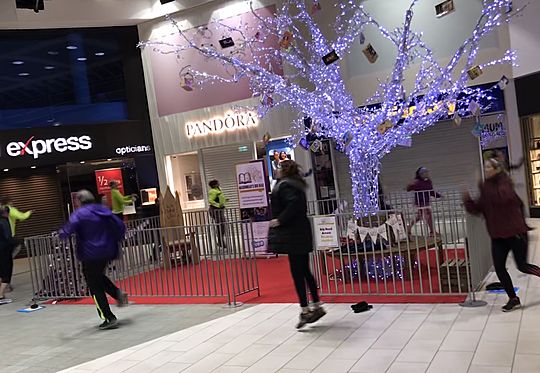 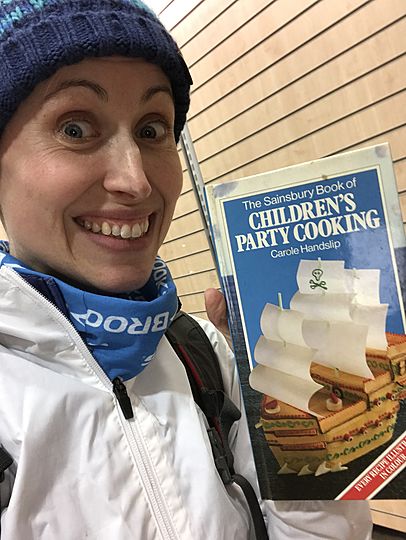 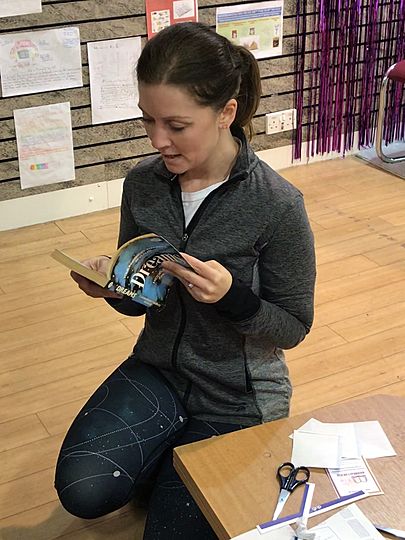 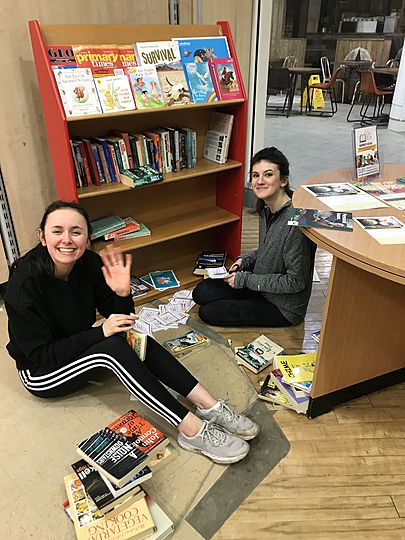 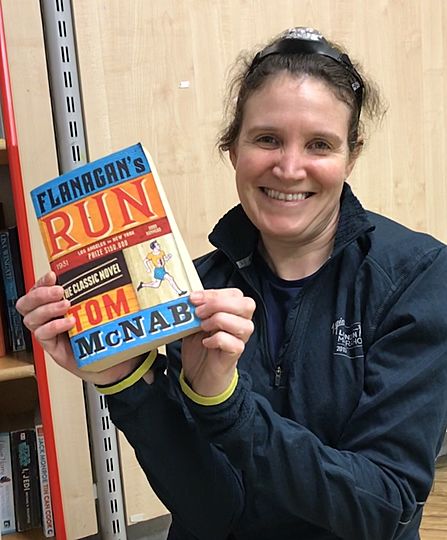 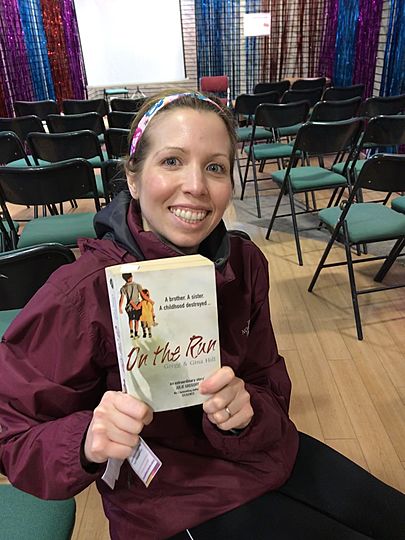 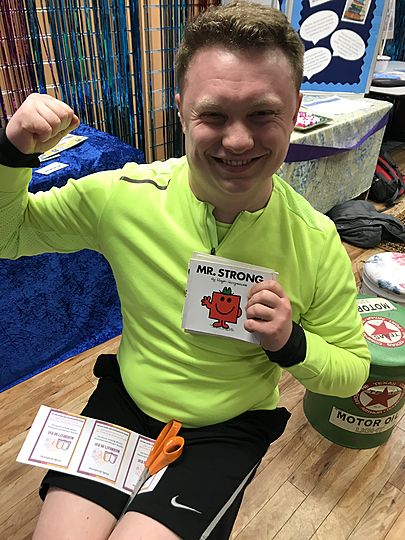 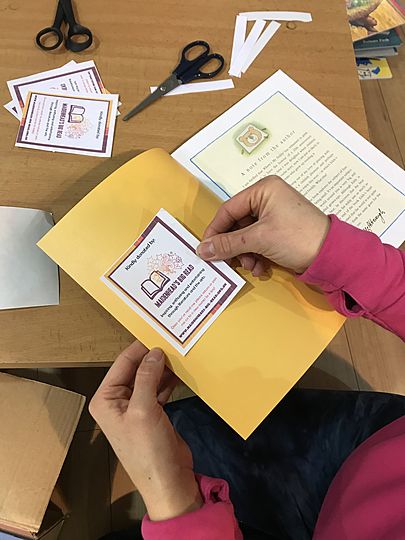 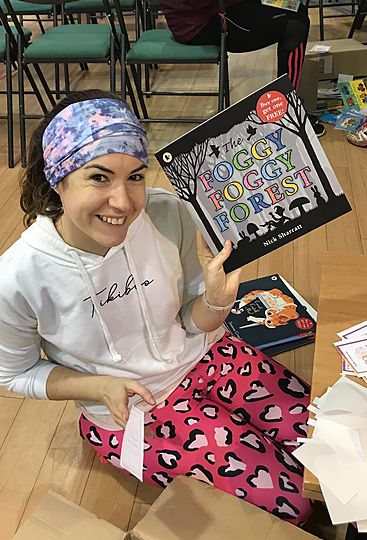 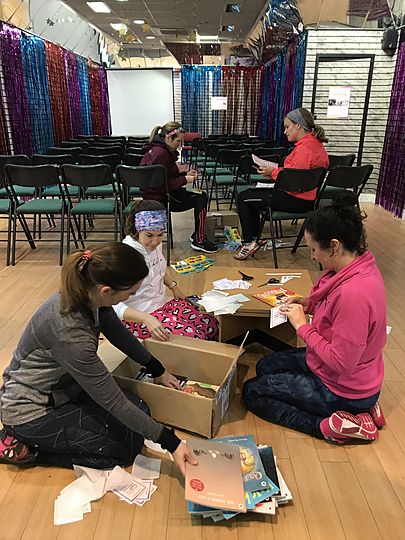 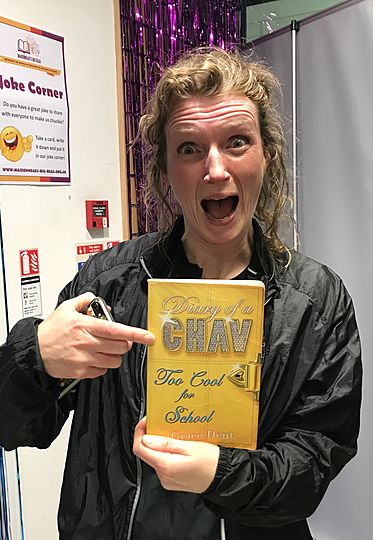 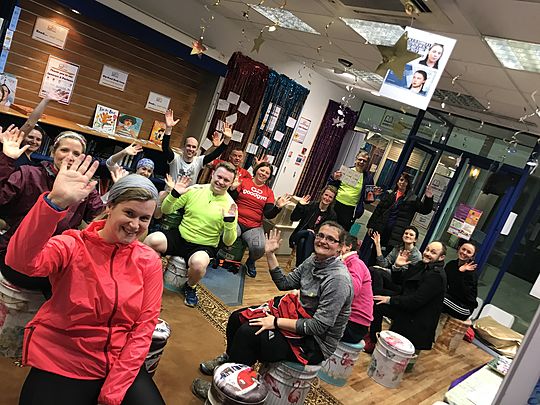 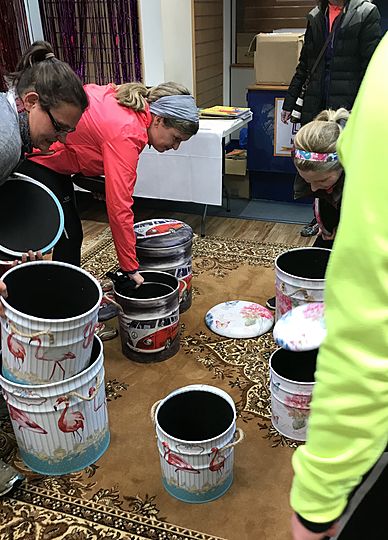 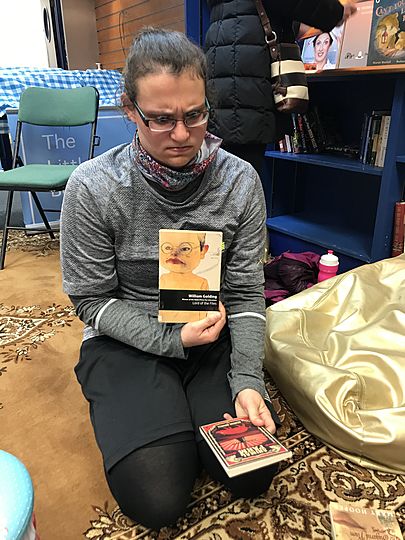 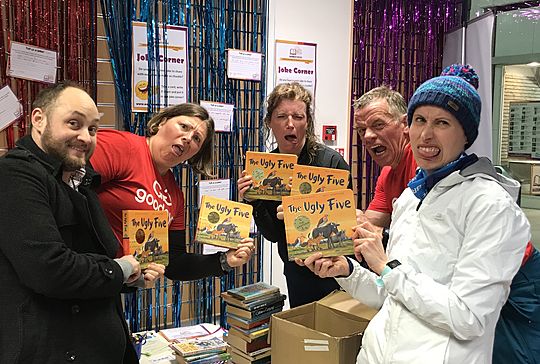 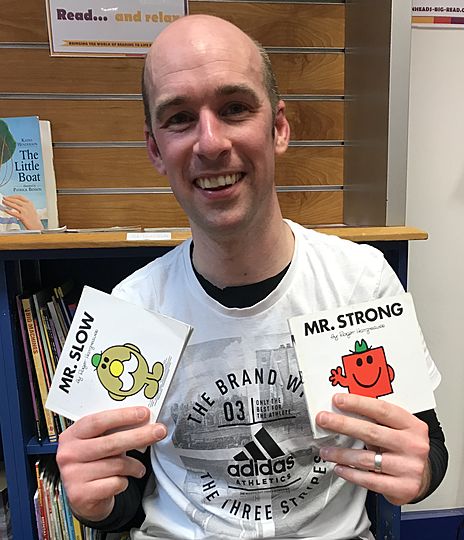 Once upon a time, Maidenhead had a book festival called the Big Read...

It was a wonderful event, which inspired the townspeople and their children to fall in love with reading. The festival hub was at The Nicholson Centre, where the Inspiration Theatre welcomed famous writers and illustrators to wow the public with their tales, and the Big Read Stop gave people a space to buy, swap and share books, letting their imaginations run wild. The festivities spilled into Schools, Libraries, the Heritage Centre, Bakedd Artisan Bakery, even a bus, and hundreds of free books were given away as if they grew on trees. In fact, legend has it that there really was a tree bearing literary fruit, right at the heart of The Nicholson Centre.

Before any books were given away, they needed a sticker inside the cover, to tell the recipient about the Big Read and to encourage them to pass the book on so that the joy of reading would spread through the land forevermore... but the volume of books and the trickiness of cutting up the stickers without making it impossible to peel the back off them, made this a laborious task, especially if you didn't have long nails.

Around the same time as the Big Read began, The Royal Borough of Windsor and Maidenhead was also supporting the launch of another brilliant community initiative, GoodGym - a group of runners brought together by their shared dream to get fit and to do good - and when their Trainer Amy got talking to the Big Read's Chairman Stephan, they hatched a novel plan: on a cold and damp Wednesday night, while the townspeople were at home watching Netflix, the GoodGym gang would storm the deserted Nicholson Centre and get the stickering done.

On the chosen night in MiddleMarch the GoodGym group gathered, for only the second time in this area, welcomed new faces Prue, Richard, and Rachael, and admired Sani and Rich's brand new red GoodGym T-shirts. The warm-up involved a variation on musical chairs, where we learned that Nick has run in the London Olympic Stadium, and Amy grappled with the Curious Incidents of the extra cones in the Night-time.

The GoodGym start location was very close to the task, so the run was a meet and retreat session run in pairs around the imaginary Town Track - a 600m loop of St Ives Road, the High Street, York Road and the new bit of towpath opposite the library. The session was devised to suit runners of all abilities, and gave everyone the chance to incorporate some faster and slower intervals at their own pace. Amy waited with Great Expectations at the start of the loop and for a few moments All was Quiet on the Western Front. Then there was much waving and cheering as runners started appearing from both sides, passing with a high-five and disappearing again On The Road. Lord of the Rings with the most circuits was Richard, and special kudos goes to Sophie and Nick, who climbed The Thirty-Nine(ish) Steps while waiting for the group to come back together.

The group then ran together to the task, and after a quick briefing, an introduction to Stephan's colleague Sarah Street, and some marveling at innovative stools, the great cutting, peeling, sticking and book-sorting began.

Whilst hands were busy, the magic of the Big Read began to work on the group, and conversations turned to books. Memories were sparked, laughs were had, and book titles inspired some silly photos.

In a side plot, Laura and Allora headed to the Ping Pong Parlour to tackle the books left in swaps by the townspeople. They also enjoyed a history lesson from a copy of The Sainsbury Book of Children's Party Cooking that was older than they are.

There sadly wasn't time for ping pong in the end, but there was still a happy ending. In just half an hour, over 15 boxes and 2 book-cases full of books had been stickered and sorted into boxes for children and grown-ups. Stephan was delighted with the result, and invited everyone to come back by day to enjoy the buzz of the festival with their families and friends. (And yes Dear Reader, you're right, although this tale is written in the past tense for dramatic effect, the festival continues until the 8th of March, so you haven't missed out! Find out more here.)

In the post-task fitness session, our heroes and heroines wrote a saga of their own. Mountains were climbed, Jacks were jumped and lunges were lunged. The group then headed back to base, and they all lived happily ever after.

If this story has left you hungry for more, then look no further than our next adventure, an intrepid trip into The Heart of Darkness to saw up firewood for the Braywick Nature Centre to use with school groups. It will be dark and muddy and head-torches are essential - its going to be saw much fun!!

Also hope to see some of you at a special Parkrun this Saturday to celebrate International Women's Day. Why not bring your sister, your daughter, your mum, your granny or your wife and make it a family affair?

Hehehehe what a great report. Thank you for a fun evening :)

This is such an incredible run report, Amy! I love it!

What a fantastical run report...it could have been written by Mr Fox. Sounds like it was a Great Gatsby of a task and I disappointed not to have joined you. It was a catch-22. Happy Goodgymming guys.

He’s Simpson if you keep leaving punderful comments like this one I’ll have you writing the next report! X

😂😂 join the back of the queue Manjit is trying to line me up for a Slough run report! X