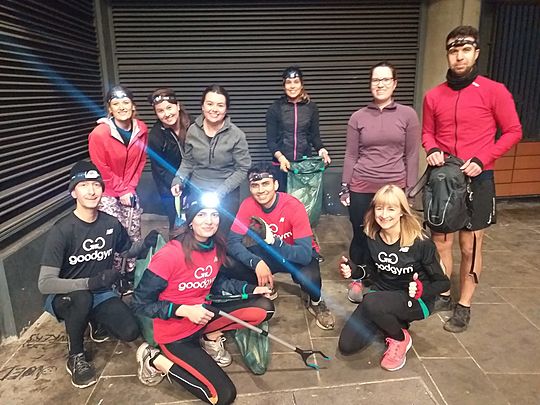 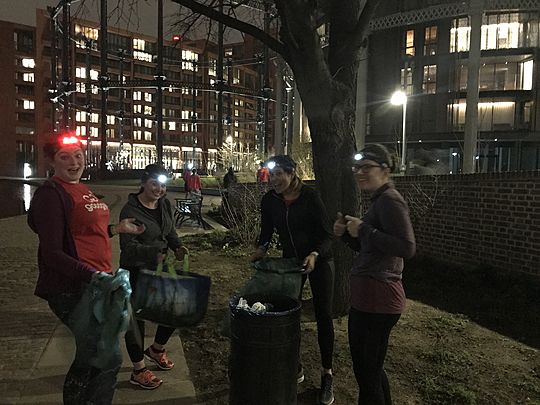 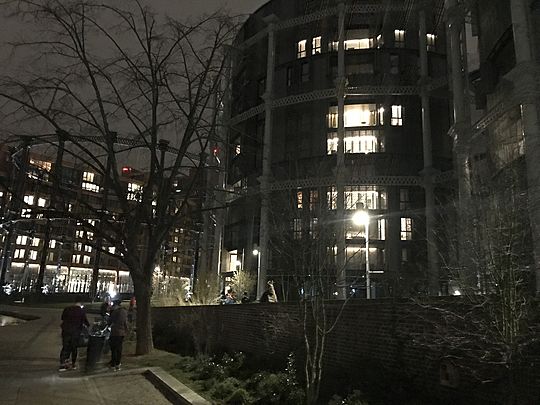 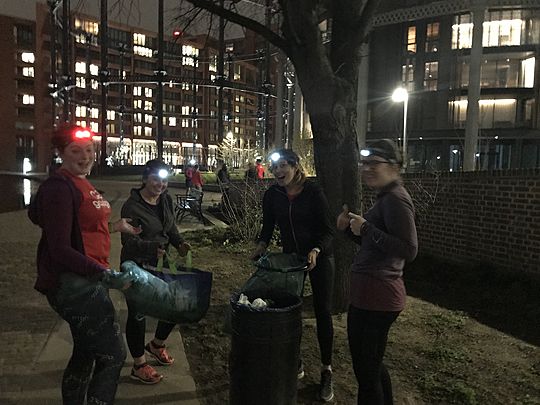 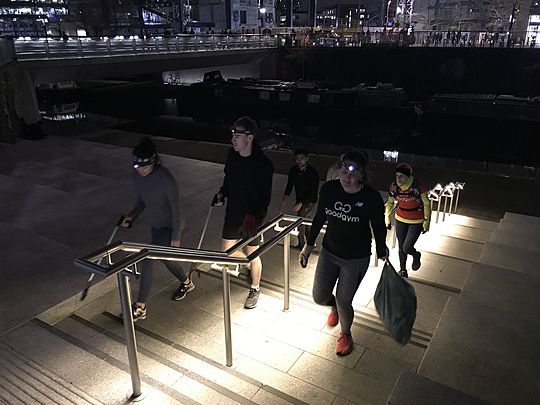 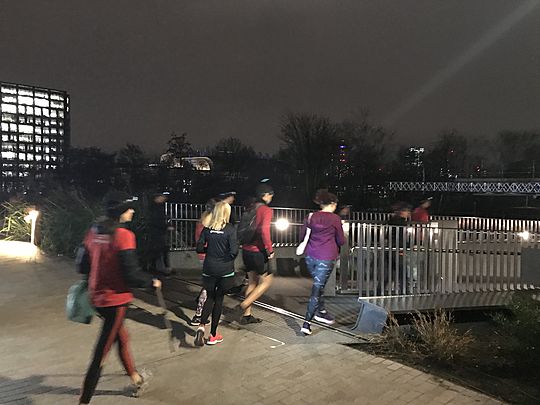 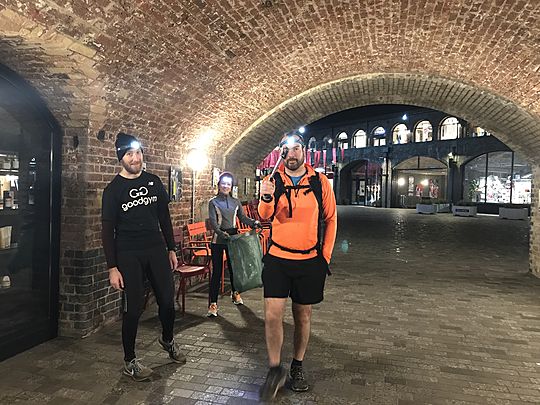 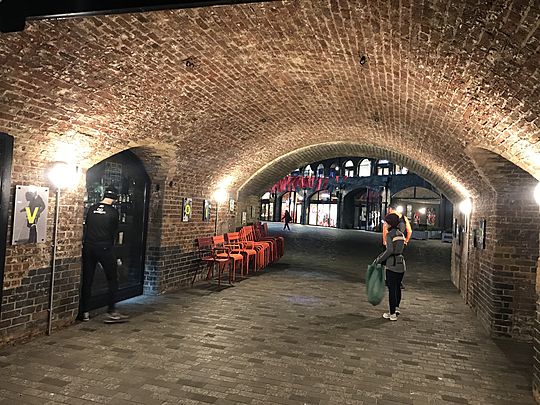 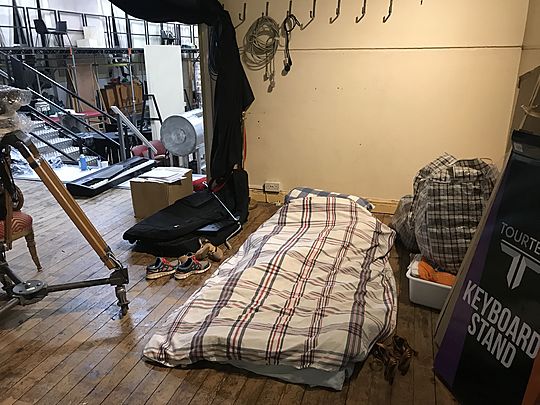 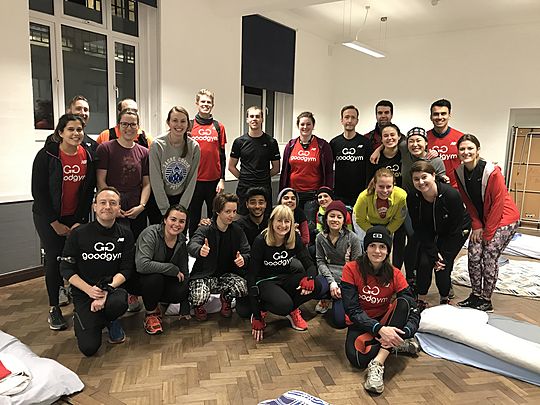 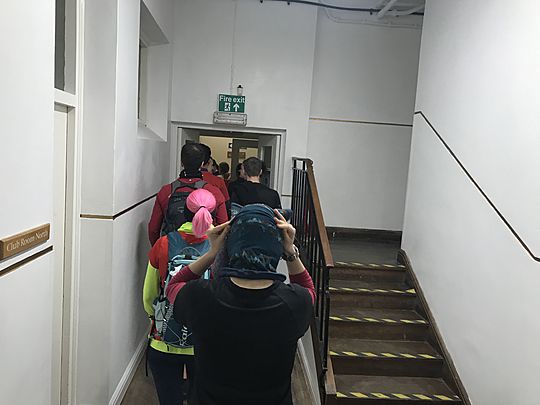 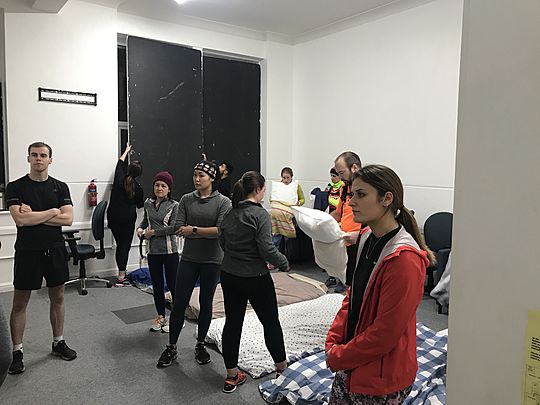 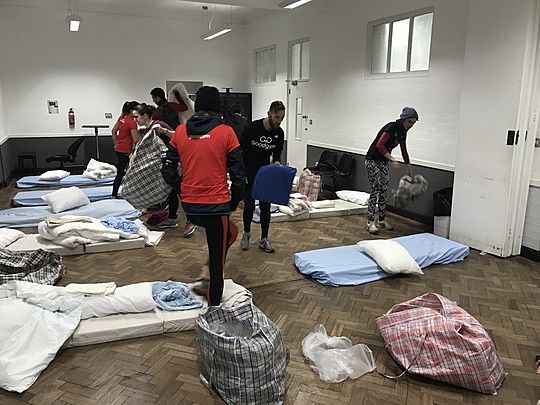 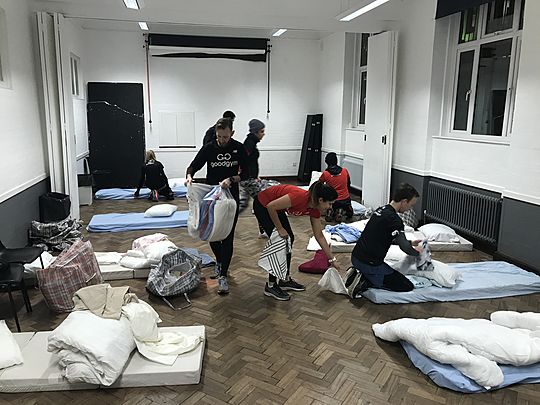 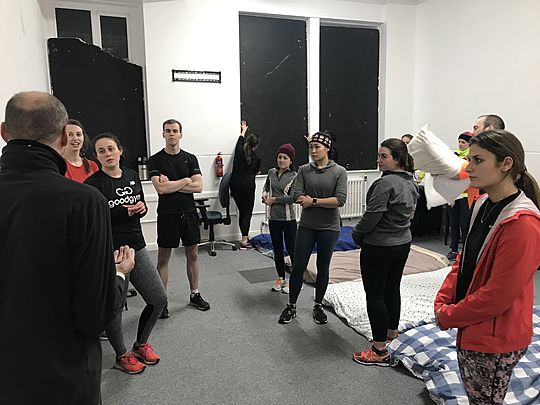 25 GoodGymers came out to do good not once but TWICE on an otherwise dreary Wednesday night in Camden!

For the first time this year, there were no newbies joining the herd so we motored on through the intro speech in record time. After some stretching out, we all ran to the American International Church together along the backstreets, arriving with 15 minutes to make the beds and head on to the second task - a mini-litterpick along Regents Canal.

Jonathan was there to greet us as normal and we got stuck in, making 16 beds in record time - 4 women's and 11 men's (an extra being Jonathan's up on the stage) - finishing just before the homeless people arrived for a good night's sleep out of the wind and cold at 7:30. In a spare moment, Jonathan told me that a Syrian family had moved into a sheltered housing building directly behind the church, having previously been users of the homeless shelter. They'd arrived 3 weeks ago and were getting settled - yesterday's task was getting a flatpack wardrobe from IKEA built - and I mentioned that Helen from Scope Camden was always looking for volunteers who'd like to improve their English by working in the shop, so hopefully we can connect both places together.

From there it was full steam ahead to Granary Square for a litterpick. HUGE thanks to Liz for the ploggers and bags and Abi for the gloves (from Story Garden no less!). It wouldn't have been the same task without you two! Please go and give them an extra cheer! Thanks go to Suraj for the killer pun for this week's report.

After arriving at Granary Square, we got the plogging bags and litterpickers ready. 3 teams of 8 were set out to clear different sections of the Regents Canal with another fifteen minutes to get stuck in. Cigarette butts were the butt of most jokes out on the plog and many ploggers perfected the use of the litterpickers to pick up the tiniest butts. Fifteen minutes later and 6 bags full (3 of recycling and 3 of litter), it was time to head back to the Living Centre. Abi's team decided they wanted to do a maxi-plog and carried on homewards, picking up extra litter as they went.

While we were out on the run, I couldn't help but notice how great it is that so many of you are talking to each other and catching up, or finding out about a new member of the herd. That's what GoodGym is all about and it's wonderful to see!

COMMUNITY MISSIONS ON A TIGHTROPE: The wonderful Liz has organised a full day of activities for you at the Camden Highline. Much like what the Americans have done in New York with the original HighLine, Camden are working on a similar concept here in the Big Smoke. The first Saturday slot is from 9:30-11:00, the second kicks off from 11:30-14:00 and the final volunteering slot of the day is from 14:00-15:45 - so lots to get stuck into if you have some free time this Saturday.

CAMDEN QUIZLETES: In the first of many upcoming Camden socials, John has organised a pub quiz for 12 of us (on two opposing teams) to battle it out for. It's at the Hanbury Arms on Thursday 20th Feb and there are still THREE SEATS FREE on the second team, so get yourself signed up here!

NEXT WEEK'S RUN: We'll be splitting the group once more next week, with one half going to C4WS and the other going to the Home of English Folk (and Dance) that is Cecil Sharp House to help Susannah in the garden with some weeding, clearing and tidying up. Add your name to the list here.

In the meantime, happy running and see you next week.