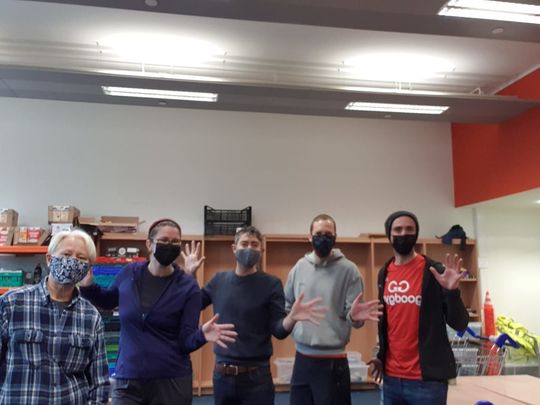 It was the GoodGym show today at Bethnal Green Food bank as 5 of us turned up for a lunchtime session preparing for the big day tomorrow - Wednesday is distribution day when the members of the community reliant on the food bank are able to collect an essential bag of groceries for the week ahead.

We joined a few of the regular volunteers and as most of us were new to the Tuesday sessions we quickly got up to speed with what was needed.

Initially we set about preparing the bags that are to be handed out tomorrow, starting with the packs for families with children which were very quick to assemble.

Then by the time the majority of us had arrived we moved onto the meat bags, which involved picking a number of standard items including cereal, orange squash, rice and some tins along with the meat specific portion of the bag.

Once we finished that and we were onto the 81 bags of fish 🐟 based packages we were in full flow and it was just the 5 of us racing through the bags in next to no time as we had very much honed the process. It was a very collaborative effort with the efficient production line of bag packing a joy to behold.

Once that was all sorted we handled a number of other miscellaneous tasks around the food bank before heading our various ways, pleased with another good deed done.

Special mention to Jess on her second ever task 👏 Here's to many more!