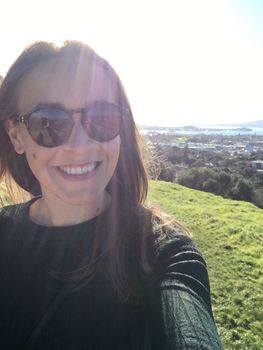 The Aston's Eyot Triathlon: Scything, Digging and log-carrying. It'll be a Commonwealth Games sport one day you know!

We spent our evening working around the new wildlife pond on Aston's Eyot - digging nettle roots out of the area where the Friends of Aston's Eyot plan to create a boggy area, scything and raking up nettles to try and encourage greater biodiversity, and moving logs to create suitable habitats for reptiles to hibernate (and to clear them from a new footpath).

Aston's Eyot used to be a rubbish dump, so there's lots of Victorian trash all over just below the surface, which makes digging and weeding a bit of a treasure hunt. Who could have predicted that we would be unearthing an old laxative bottle and taking it home to use as a vase? Hopefully the digging team won't get prosecuted for their efforts by Christchurch college - the sign prohibiting digging looked pretty ancient!

Scything is a GoodGym right of passage, so we're always delighted to have a chance to show our newer members how to do it. Fortunately this load of nettle scything didn't seem to trigger everyone's allergies like it did when we scythed nettles in June before. Good to know August is better for the hayfever sufferers!

Milly Haven signed up to a group run
Group run

Aston’s Eyot is an island in East Oxford formed by the River Thames, the River Cherwell and Shire Lake Ditch. The 32 acre nature reserve was originally a water meadow, then a rubbish tip for a while at the end of the 19th Century, it is now a mosaic of woodland, open area and scrubland. The land is managed by the Friends of Aston’s Eyot as a nature reserve with public access.

There will be various jobs for us to do around Aston’s Eyot nature reserve, including digging out a pit to make a boggier patch near the trial pond, scything, and other maintenance tasks.

Please bring your own gardening gloves.All tools will be provided.

If you would like to run to the task location with the group meet in the car park of the Richard Benson Hall at 6pm.It is less than a mile to Aston’s Eyot, but we can take a slightly longer route if we set off on time.
If you want to meet at the task we will be at the intersection of Meadow Lane and Jackdaw Lane at 6:15pm. We will walk along to Aston's Eyot together from there.

A weedin’ good time on the Costa del Marston ☀️

13 (unlucky for some, but not in our case ) GoodGymers ventured back to one of our favourite places, Marston Forest Garden. Its been a while since we last helped at the site and it was amazing to see the progess the team has made. As always we were given a very warm welcome by Isobel and we divided into weeding parties. The superstars Thomas and Sam also helped move wheelbarrows of woodchip onto one of the plots. Weeding in and amongst the gooseberries also gave Katie the chance to bring our the Seek app to make sure that no plants were harmed in the weeding process! We finished with some wonderful homemade lemon drizzle cake from Isobel!

Marston Forest Garden is part of the Marston Community Garden cooperative, which comprises a community allotment, the Forest Garden, a chicken coup, an orchard and a new Community Wood on New Marston Recreation Ground plus much more.

Bring your gardening gloves. All tools will be provided.

Meeting locations:
If you would like to join a group run to the task location please meet Ben at 5:45pm outside East Oxford Community Centre, Princes Street, OX4 1DD. Please note the community centre is now closed for redevelopment so we won’t have access for toilets etc. It is approximately 2 miles to Marston Community Allotment from there. You will need to arrange yourselves into a group for the run back afterwards as Ben has a prior commitment.
If you prefer to meet at the task meet Katie at the Boults Lane Recreation Ground entrance to Court Farm Allotments at 6:15pm. OX3 0NT

We spent the afternoon helping out on the finish line at Blenheim Triathlon. It was fantastic to see so many of our GoodGym friends complete the race.

Milly has already done 25 good deeds with GoodGym. Instead of doing anything else, they've used their run to go and help people that need their help; digging, lifting, scraping, clearing, planting and weeding. Stuff that makes this a better place to be.

Oxford City Farm is a lovely task location, and they're always really enthusiastic about getting a GoodGym flash mob in. It's a fairly large site, with lots of tasks to do, so that can be a bit overwhelming for their small team. Last night they were really well prepared for us, with a list of tasks on a white board (love a good list!), and tools laid out in appropriate locations around the farm.

Divide and conquer was the name of the game.

After 'What's your favourite farm animal?' as the question of the day, we scattered smaller teams off in different directions to see how much we could tick off. The jobs we completed were:

The only task we didn't manage to get to was removing the thistles from around the strawberry patch, but hopefully that isn't too bad of a task for someone to complete on another day.

Our power hour over we were treated to freshly cut lettuces to take home and a chance to feed the VERY tame sheep. Oxford City Farm sheep are not your average farm animal - they're more like pets that come running when you rattle their food box! Always a hit with the GoodGym crew.

Thanks to Phil and Maria from the Farm for welcoming us in to commune with the chickens, sheep and Peter the rabbit. If you're keen to visit again soon we will be helping out at their open morning next Friday. All the details are here.

Milly Haven signed up to a group run
Group run

There will be various tasks around the site; gardening, watering, general tidying and maintenance etc

Please bring your own gardening gloves. Tools will be supplied if needed..

The City Farm is behind the Isis Care Home on Cornwallis Road. Meeting options:
If you would like to run to the task with the group meet in the car park of Richard Benson Hall, 276 Cowley Road at 6pm. It’s a 1 mile run to Oxford City Farm.
Non-runners please meet us at the gate to the farm at 6:15pm. Location pin here.