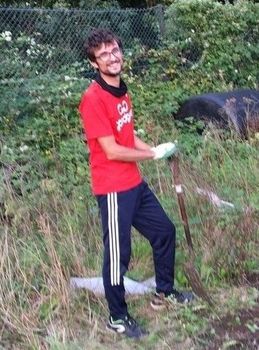 This evening we ventured to the west of Oxford to help Dean Court Community Centre spruce up their outside space ready for re-opening as restrictions continue to lift.

Twelve Goodgymers were quite the team of weeders, sweepers, litter-pickers and tidy-up-ers!

We weeded some very precious planters, removed grass from around the fencing, gave the carpark area a good sweep, pruned back some unruly budlia and did a thorough litter-pick around the site.

All this was achieved in excellent time meaning we could stop for a well earned cake break and sup some squash provided by the ladies at the centre.

We all then set off into the cold sunshine, some of us to run up a hill in the name of fitness!!

Congratulations and loud hurrahs to Stu for his 50th good deed and James for his 10th.

Come and join us as we tackle the litter in one of the favourite picnic and bonfire spots beside the Thames in Oxford.

As well as being an eyesore and dangerous to wildlife, the litter accumulating in this area easily washes onto the waterways, so the Longbridges Nature Park has been identified by Oxford City Council as a high priority area for clearing litter. We'll do our best to get it into a good state before the May bank holiday weekend.

We will divide into groups to plog along nearby stretches of the Thames Path, clean up Longbridges Nature Park, litter pick parts of Donnington Bridge Road, and possibly also do a litter sweep around Iffley Meadows.

Litter pickers and bin bags will be provided. Someone from the City Council's green spaces team will meet us to collect the full bags at the end of our session.

Meeting points:
6pm at The Richard Benson Hall on Cowley Road if you would like to jog the 1 mile over to the litter pick. OR 6:15pm inside the vehicle gate into Longbridges Nature Park on Donnington Bridge Road west of Donnington Bridge.

It’s the end of lockdown as we know it

Yesterday was our 24th consecutive Wednesday packing and delivering food parcels for Oxford Mutual Aid. We packed 49 parcels and delivered 30 of them, helping approximately 70 people.

The graph picture shows the number of food parcels we’ve prepared each Wednesday session going back to our first one at the end of October last year. What it doesn’t show is our small team’s dedication to helping distribute the much needed food:

We have packed over 900 parcels on Wednesdays, delivered an estimated 600+, walked hundreds of miles between us to deliver food, chatted on the doorstep to lonely people, and got to know the food preferences of strangers.

GoodGymers have turned up to help on cold, dark nights, in rain, ice and snow, supported each other throughout winter lockdown and welcomed new members of the team. We haven’t taken a week off, because hunger doesn’t stop.

Our superstar GoodGym Oxford crew do Saturday and Sunday shifts at Oxford Mutual Aid too (we just don’t have stats and graphs for those!), have helped out on Christmas Day and bank holiday weekends, not to mention Rob raising incredible sums of money to replenish OMA coffers.

A report released by the Commons Environment, Food and Rural Affairs Committee yesterday estimated that up to 5.9 million adults and 1.7 million children experienced food poverty or insecurity in the six months to February. Those statistics are appalling, but they're also just numbers easily scrolled past. Knowing that people on your street, in your neighbourhood, in your town can't afford essential food and are calling for help shows the human impact behind the numbers.

As COVID restrictions lift a little next week we will adjust our way of working with Oxford Mutual Aid to a system which allows us time to also help other community projects who are reaching out to us. So, it’s an end to Wednesdays as we’ve known them for the last 24 weeks, but certainly not an end to working with Oxford Mutual Aid. We'll still be packing food parcels but making fewer deliveries.

At this pivot point I wanted to say how proud I’ve been of Goodgym Oxford members. We’ve been able to muster around 30 helpers every week through some very difficult weeks without ever having to beg or cajole. You’ve seen the need and met it.

Boundary Brook Nature Park was created in 1990 when a group of community wildlife enthusiasts rescued a plot of disused allotments to carve out a wild space in the heart of East Oxford.

Featuring mixed woodland, meadow, a nature pond and butterfly glade, Boundary Brook is home to a rich variety of wildlife from birds and butterflies to frogs and foxes.

Oxford Urban Wildlife Group have asked for our help to with a mixture of tasks as they start reopening the site, including seeding grassland and building paths.

We will split into smaller groups of 8 or less to work on tasks in different areas of the Nature Park. We will also have the litter pickers with us for a small group of 6-8 people to clear up the surrounding walk and cycle way. There is plenty of space to spread out and maintain social distancing.

Please bring your own gardening gloves. Tools and litter pickers will be provided.

We are dividing ourselves between East and West Oxford tonight: This is the West Oxford option. Check the listings for activities in Cowley at the same time.

Dean Court Community Centre has been closed throughout lockdown and is now getting ready to open their doors again. They would like our help to tidy up their outdoor space ready for reopening - weeding the planters and communal areas, cutting back brambles, litter picking.

Tools, litter pickers and bin bags will be provided, but please bring your own gardening gloves.

Julia and Bethan will be in charge of operations at this task - Task Force takeover!

Banking the shifts at OMA

5 of us packed:
6 Emergency Parcels (for 10 adults, plus children) to get some food to people who have run out.

Thanks to Lorenzo for giving packing a go for the first time and hitting the ground running ;-)

No muss, no fuss, delivery superstars r us

Tonight we packed 38 parcels of food and hygiene supplies and delivered 25 of them on foot around East Oxford.

Peggy was excited to show off her snazzy new jumper, we peered at each other in actual daylight, and although more than 1 of the bag handles didn't survive beyond the car park fortunately all the cheese, greek yoghurt, corned beef, milk, veggies, bread and pasta made it to the 50 recipients in tact. There may have been a couple of head-scratching moments, but nothing we couldn't sort out, and everything got delivered before it was fully dark - an exciting springtime first!

Thank you to those who answered the call for donations and brought along some hygiene supplies to replenish the bare shelves with shower gel, deodorant and sanitary products, as well as other useful and appreciated items (tin openers, chocolate).

This week we will split between 2 tasks again.

We're now into our 6th consecutive month of Wednesdays at Oxford Mutual Aid, and the majority of our Wednesday team are still needed for food deliveries. It's proved to be a valuable partnership for us and provided crucial extra help for Oxford Mutual Aid through this COVID lockdown winter. It has kept us busy and connected with each other, and enabled Oxford Mutual Aid reach more people with deliveries of food and other essentials.

This 6pm task will be delivering food parcels within walking distance of Richard Benson Hall. We will divide into small groups to deliver in different areas. No-one will be asked to deliver on their own. With the slight easing of restrictions the rule of 6 now applies, so delivery groups can be slightly larger. The clock change will mean we will have daylight so I might bring the litter pickers too.

Please wear a mask when you arrive at the hall to collect the food parcels and when you drop them off with the recipient.

There is a 2nd listing for this evening for 6 people to help The Children’s Allotment, do check that out and take your pick between the 2 tasks.

By the last light of the day 31 GoodGymers gathered beside a church on the Cowley Road.
At 5:45pm a watch beeped and -pop! - out of the Richard Benson Hall came a red-clad and very bossy group leader.
She started to look at the food parcel delivery list...

Who's here so far?

At 5:50pm the first food parcels left to be delivered.
But there was still more to do.

At 6pm bike panniers and rucksacks were filled.
But there was still more to do.

At 6:05pm asparagus and ragu were added to the parcels.
But there was still more to do.

At 6:10pm 5 food parcels went out in a flurry of activity.
But there was still more to do.

At 6:15pm the last of the regular food parcels went out of the door.
But there was still more to do!

At 6:30pm Emergency food parcels were loaded up, crates were stacked away, shelves were restocked, cardboard was broken down, meals were put in the fridge, fruit and vegetables were sorted out, buns were emptied, and stock levels reported.......

The team started to feel tired.

So the GoodGymers ate a whole Colin the Caterpillar. And they started to perk up, giving them the energy to run home and recover from their exertions....

.....so that they can do it all over again next Wednesday evening.

39 food parcels were packed and delivered on Wednesday night, which will help 50 adults, plus several children and babies.

First things first, THANK YOU for turning out to make food bank deliveries tonight despite the dreadful weather. I hope you are all warm and dry now.

Secondly, I failed in my duties both as a group leader and a sister by not having cake tonight to celebrate Bethan's 100th Good Deed, which she did since last Wednesday. Double cake for everybody next week to make up for it! Well done also to Ruth and Alistair for getting to the 10 Good Deeds milestone. Warm welcome to Ariane who joined us for her first GG experience.

Tonight your efforts meant that:

Here's some thanks from one of the recipients: "Thank you so much for that food parcel you made up for me today,.... Perfect!! It shows you care. You're a real life line for me.
Thanks again,
Your friend."

That's worth getting soggy for!

Big thanks to Tamasine for excellent work restocking and clearing up in the hall - the extra help inside was much appreciated.