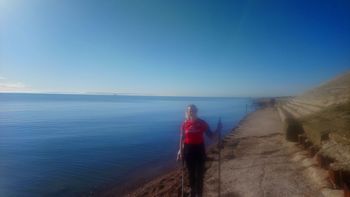 I've just started running again after a knee injury and I'm loving having a purpose to keep going!!

An easy shift, with a nice steady flow of second-jabbers. No mishaps, no dramas - unless I missed anything!

Andy on thermometer; Eli & Katie in the waiting room; me in the car park.

Most exciting event: Sarah turned up to get her jab and to do some complimentary litter picking of the shrubs and car park.

Let's turn our attention to the other side of Great Salterns... We don't often get all the way over here when we meet on the far side car park. I call this but McDonald's corner as there is often a lot of litter from people's takeaways that ends up here.

Meet by the road entrance to the Pets At Home car park (on the corner of Great Salterns Rec).

Let me know if you need me to bring you a litter picker!

On a chilly Wednesday, 5 intrepid GoodGymers braved the cold to tackle some of the litter on Southsea Common. Fortunately, due to the recent temperature drop, there wasn't loads of evidence of BBQs or parties...

We picked up plenty of bottle tops, cigarette ends, flushables that had washed over from the sea (crazy waves) and various food and drink wrappers.

We were also very pleased to be joined by Loki, a 4 legged honorary GoodGym member who belongs to Val's daughter.

We also got a run past from the Southsea run group, including Rosie in her wings. 😇

We learnt that Eli has loads of cheese jokes and she's promised to serve us a selection at many future get togethers!

It was lovely to see everyone and have a little wander about, catch up and fill a few bags of litter. 🚮

Over the Easter weekend Goodgyners showed off their running, navigation and general craftiness to find and create some beautiful pompey eggs. Everyone was very diligent with Sam Eliand Katie all getting a Full Basket of Eggs! The egg frames were brilliant with Kat and Jo K making colourful traditional designs. Geraldine and Katie making theirs from their Easter egg packaging and Samantha creating an amazing Easter Bunny teletubby wearing shorts! Many runners found extra eggs on their travels I love the Artists Ric Robinson's beatiful cat painting being taunted by the Easter bunny! The sun shone and the egg photos were amazing. Well done everyone!

Eli has completed their 15th good deed with GoodGym

Arriving at a very busy car park, and an already full bin, Angela, Eli, Jo K, Louisa, Mel and Rachel fanned out across the green, past the cricket pitch picking up a surprising small amount of litter considering it being Easter and the new lockdown freedom. However this soon changed as we made our way towards the picnic tables scattered around. At the first we found still burning remnants of a fire which Mel doused with her handy bottle of Ribena. We also found glass bottles, cans, food wrappers, usual plastics and lots and lots of bottle tops. Some more bins in the middle of the field were filled to the brim, and additional bags were propped up against them where people had tried to do the right thing. Unfortunately little animals and the wind had spread the rubbish around, so we quickly picked it all up, keeping glass, recycling and rubbish separate. Eli, used a link to report this to the Council/Colas so that it could all be cleared away. The time went really quickly, but as we walked back to where we started, it was clear that we'd made a difference. A few people thanked us which was lovely. Off we went to enjoy the rest of the Easter weekend and sunny weather. We left the rubbish at the bin, the glass was dropped off at the Baffins glass bank and recycling taken home to Mel's big bins.

After some sad photos of Southsea Common, we're going to try and lend a hand.

Meet at the war memorial for a walk and litter pick around the area. Let me know if you're bringing a litter picker so I don't overload myself!

No end in sight?

As Eli, Rachel, Paul and I arrived for the afternoon shift, we were each amazed by the sight of the queue. Even with gaps for social distancing, there were LOTS! of people queuing for their jab. The queue went down the road, round the corner, past the back gates and up the hill....!

The older tier group were returning for their 2nd vaccine, the 40+ age group for 1st vaccine, plus University staff invited on a walk-in basis.

Eli battled against a sore left arm from her recent jab, and had a swollen right hand after hours of thermometer use. Rachel squeezed anti-bac onto hundreds of hands and I directed drivers & cyclists to their 15 minutes of camping. Meanwhile, Paul managed the dark side, overseeing the tent.

The queue was beaten just on 3pm and Rachel & I were dismissed. Eli and Paul remained on duty as the Centre was staying open until 5pm. Bravo to them!