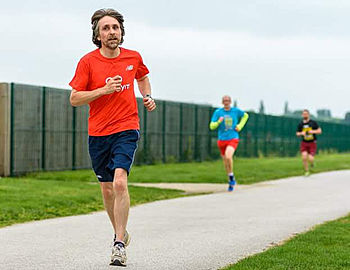 Carl Wain signed up to a party
Party

Come and run/walk York parkrun with your GoodGym pals then join us for coffee/breakfast at the Knavesmire pub afterwards.

I hear it's a flat one (PB anyone?!) And if you've not done it before, it's a chance to get a Y for your parkrun alphabet. What's not to love?!

More info about York parkrun, including where the start is, can be found on their course page

I'm told that Knavesmire Road is a good place to park and if you use What3words, it's grin.helps.empire

Look out for the red GoodGym tops just inside the entrance to the Knavesmire and either run with a GG buddy or go your own pace, whatever you fancy!

We may start doing this regularly (maybe every month or so?), including doing some parkrun tourism. Let me know what you think, and if you've got any favourite parkruns you'd like to visit 👌🏼

Carl Wain signed up to a race
Race

Sun 12 Dec 10:30 am
Map
York Racecourse, Knavesmire Road, York, YO23 1EJ
Sign up now
You get to dress up as Santa and chase a pudding!

The annual British Heart Foundation Chase the Pud is back on York Knavesmire. Run one or two laps (3 or 5k) dresses as Santa trying to catch the Christmas pudding. Entry £10 adults (suit included) or £5 kids (suits available to buy or wear fancy dress)

Details of how to enter coming soon ...

🌡️On a deceptively chilly Monday evening, a group of excellent GoodGymmers met to do good (and get fit) for not one but two organisations in York.

🍂 After a warm up that involved us discussing our favourite things about autumn (who knew that leaf-catching was such a big thing in York?!), we split into two groups.

Laura led a group to Holgate Community Garden where they cleared the overgrown circle around the climbing frame of weeds and brambles. They also weeded around the small fruit trees and the very important play train, along with raking and brushing leaves and litter picking around the garden. Phew, what a productive half hour💪

🌱 Meanwhile, the rest of us headed to Acomb Primary School, via the "scenic route" (definitely deliberate, right Mitch?!) We were met there by Amanda who gave us the infamous instruction to...

*Clear everything * (except the trees and raspberries)

🍪 We didn't need telling twice, especially when we could see the biscuit-based reward that Amanda had in store for us.

🦆 We congregated at the excitingly apparently unheard of Holgate Dock for a fitness session of some classic primary school games of British Bulldog and Squat, Squat, Goose.

🏃‍♀️🏃‍♂️ We then ran back to base for stretching and the pub.

🙌🏼 Thank you everyone, looking forward to seeing you all next week, and huge good luck to the marathoners and 10 milers this weekend.

Wow, Carl has completed a 12 month mission streak. That means they've cleared gardens, moved furniture and changed light bulbs in spring, summer, autumn and even winter. Show your support and give them a massive cheer!

Hew put that bench there

Louise arrived to lead her first Goodgym Community mission, keen and rarring to go. We had a passer by wanting to relay her concerns about missing people to a captive audience. We managed to encourage her to move on so we could concentrate on the task at hand after giver her some time first. Louise and Nicky ran while Michal, Richard and myself took a map each and cycled. We managed to cover both Heworth and Derwanthorpe so great progress. Richard found lots of benches while there were also a number in Derwanthirpe not yet mapped so well worth doing. Osbaldwick next.

My heart willow on

26 excellent GoodGymmers met on a pleasant Monday evening for this evening's group run.

👋🏼 We gave a huge welcome to Martin on his first GoodGym task.

🦸🏼‍♀️🦸‍♂️We also had two caped GoodGym heroes - tonight was Louise's 100th good deed and John's 300th! Huge congratulations to both of you.

🙌🏼 And if that wasn't enough, we had mega kudos to give to lots of runners who ran excellent races in both Kielder and Dalby Forest. *What a week! *

🚶‍♂️🏃🏼‍♀️The walking group, led by Leanne, was a popular option this week, while Pete and Nicky (mostly Pete) led the running group, after a quick warm up.

We were met at Willow House Garden by Rachel and her colleague who helpfully provided tools and bags.

"Get rid of everything"

🌿That was the instruction and we didn't need telling twice. There was some enthusiastic pruning (hacking?!), sawing, sweeping and even a bit of topiary! In half an hour, the area looked well-shorn and Rachel was very happy with the result.

📸 After a quick group photo, we did some game-based fitness, using the classic Rock, Paper, Scissors and Stuck in the Mud. Before we knew it, the walking and running groups were ready to head back for a cool down and stretch.

👏🏼 Back at base, a huge thank you was given to Michal for everything he's done as Area Activator, including through a beautiful card created by David. Further thank yous and catching up happened at the pub before we said our farewells and went our separate ways.