Deliverator 2: Return of the leaflets 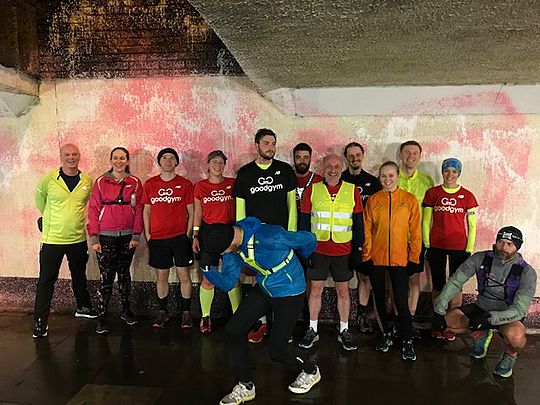 Last week was all about Youth Homeless North East and tonight was all about the sequel! We decided following a bunch of leftover leaflets and a gap in our Group Runs that tonight was as good a night as any to head out further into Jesmond to get dropping! You can find out what we did last week here.

We didn't have any Community Missions to catch up on so we had our usual parkrun round up and looked ahead at what was coming up. We also gave Task Forcer Richard a big cheer which we are sure he heard in New York, where he ran an amazing 2:58 in the Marathon yesterday. All of that despite trapping his finger in a letterbox last week! We can't wait to hear about it when you're back, Richard.

It was great to welcome Pete who gave me a geography lesson on where Stockport is as he was here tourist-ing for the evening. We also acquired Damien who's moved here from Norfolk where he ran with GG Norfolk a couple of times in the past too. Both were great additions to the group and huge kudos to them for coming along on such a rotten night!

We had a fireworks themed game of tag for the warm up then it was off to Jesmond with our own fireworks display (super flashy head torches, obviously) and Paul back leading the pack after a few weeks away. Conversation topic was around sequels tonight, and whether they are ever a good thing. We decided that in the case of Back To The Future 2, Aliens, Terminator 2 and, er, Paddington 2.. they definitely are.

You'll notice a distinct lack of photos tonight and that's because the weather was absolutely appalling and it was a case of gritting our teeth and cracking on with the job in hand. The group stayed together so well on the run out, moving at a faster pace than we usually do and expertly back-marked by Debbie and Michael. It was amazing to find when we reached our delivery point of Osborne Road that the leaflets weren't complete mush!

Teams of 4 assembled and streets were covered in no time with almost 200 YHNE and GoodGym Newcastle leaflets in a double-good drop. Job done and mission completed in 18 minutes! Creating a part 2 paid off and hopefully will come back in loads of lovely donations for YHNE in the coming days and weeks.

It was too wet and cold to stay still for long so it was off to Exhibition Park for the fitness session. Working in pairs, the challenge was to collect as many points by running short sharp uphill laps (1 point) and longer flat out-and-backs (2 points) on repeat for 8 minutes. What was really cool about this was that you could do either section and entirely at your own pace, taking as many breaks as you liked. Nick and Abi were victorious with a fantastic 38 points- 10 points ahead of second place!

We're back next Monday with our monthly visit to our friends at Newcastle Eagles for some gardening and good things. There's a walking option on that too, so bring someone along who wants to try us out for the first time.

Have a great week, you deserve it! Anji x