8 runners ran to help the Archbishop Holgate's School in York. 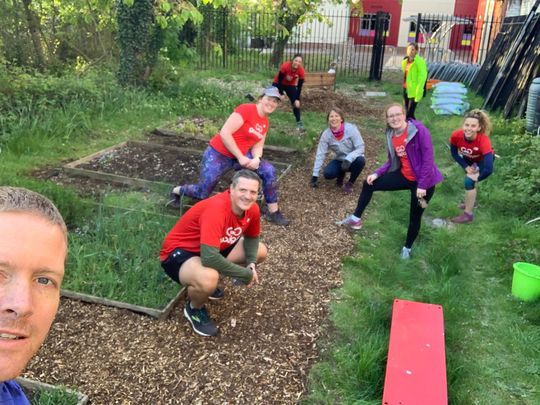 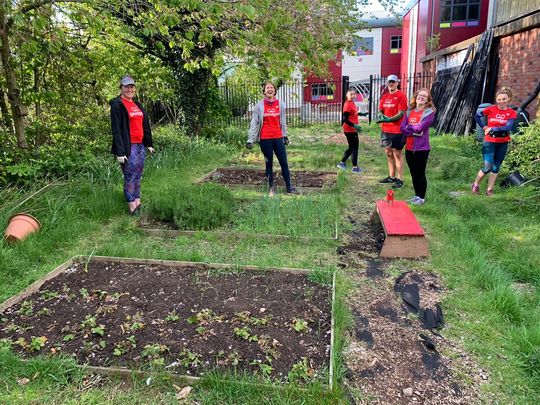 8 hardy Goodgymmers rocked up outside Archbishop Holgate's school, ignoring the warnings of Debs's watch to "Expect rain in York" and focusing on the sun streaming down from above. (The black doom clouds to the east were something else, but fortunately they were soon hidden by school buildings.)

We met the lovely Helen who runs the school gardening club, and she took us round to their allotment that has sadly been neglected due to lockdown. Our task was extract the path that lay beneath the grass-covered membrane, lay new membrane if required, and cover with wood chip transported from outside the compound. It was a pretty small pile by Goodgym standards, and bets were soon placed as to how long that part would take.

Hayden was clearly keen for some shovelling, so he joined by Ang and Debs headed for the pile and the trolley. We assumed Michael was joining us as our 4th man, but he got distracted and we quickly realised we were better off without him. In true Goodgym style, we were making do with an assorted range of tools; 2 lovely shovels, 2 teeny spades (definitions of each were provided to unaware kiwis), and a box-trolley purloined from the cleaners filled with a sheet to stop it getting dirty. In reality this provided the perfect solution as to how we would empty the trolley - roll up the corners and heft. We soon had the technique nailed, including navigating the rocking trolley around the fencing, through the gate dip and across the soil. (Basically you just need to keep your end up.)

Meanwhile Michael and the weeding ladies had cracked on with the tricky job of separating vegetation from fabric.

Perfect, I've found another task where I can sit down! -Ellie

There was a long straight stretch that was the main path through the allotments where old membrane could be discerned, and narrow paths around and inbetween the 4 individual beds that were well buried. Hands were largely found to be the preferred method, and buckets obtained for transporting the grass to the sturdier of the two compost heaps. (Heap number 2 will be a task for the future!) With much scrabbling and pulling the long path was cleared, and a pristine length of membrane laid down and pegged in place. Michael, bored of his 2 square feet of weeding, joined the wood chippers in carefully distributing the pile along the length of the path. Not too much so as to leave enough for the later paths, but just enough to make it right. Once a one-way shovel-bucket transport system was in place it went seamlessly, and a Proper Path emerged.

With time ticking, the weeding ladies had done a sterling job, and one middle path was cleared ready for a speed-membrane and barking. After it was carefully distributed,we admired our handiwork, and promised to return again to help with further jobs. Giving thanks for the sunshine we headed home for tea, without really wanting to know how the topic of conversation amongst the weeding ladies ran to just what you would be prepared to do to help your partner get ready for a run. We won't name names, but bodyglide was mentioned.

Sounds and looks you had a great time