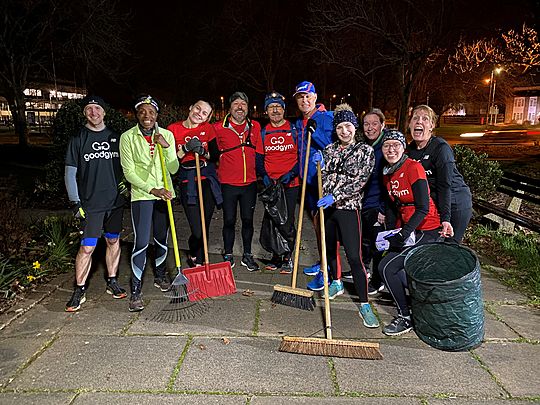 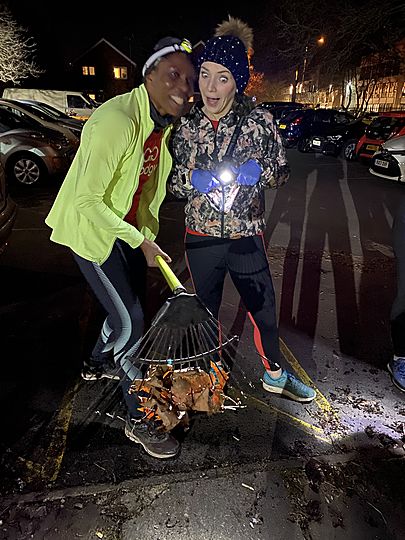 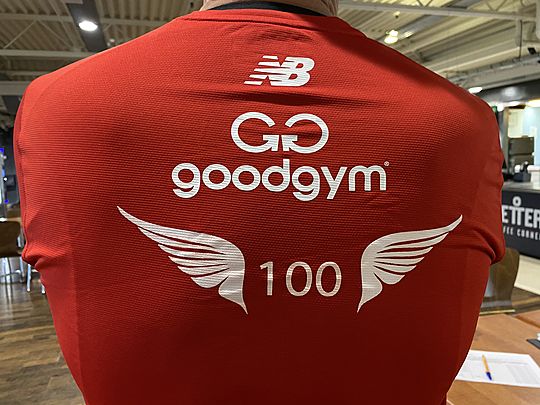 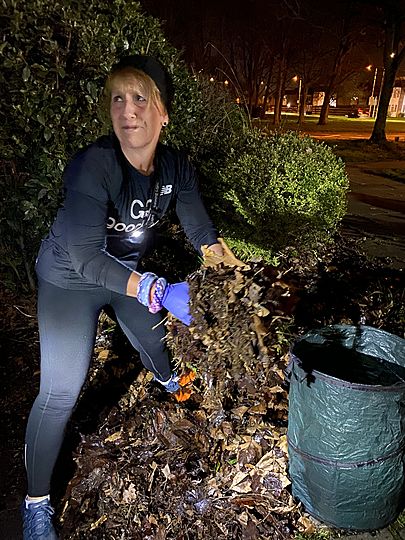 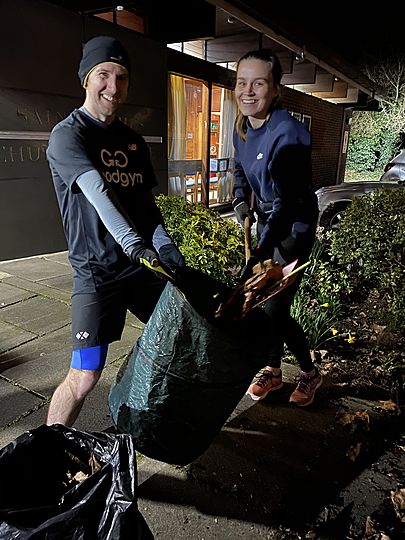 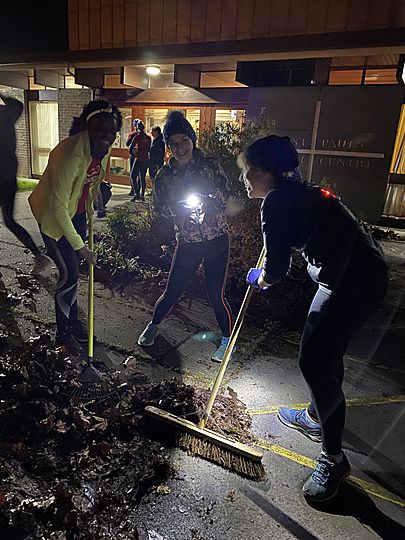 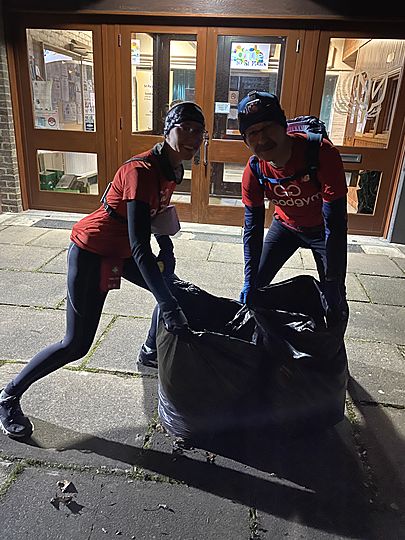 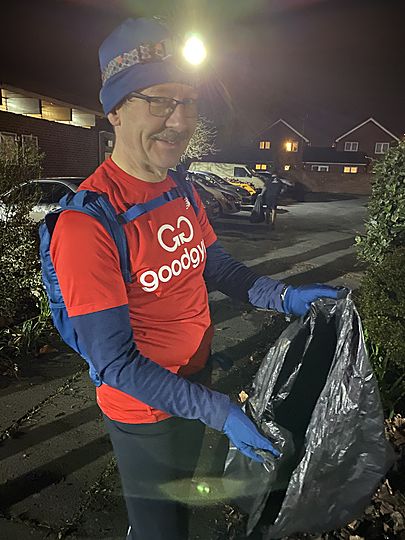 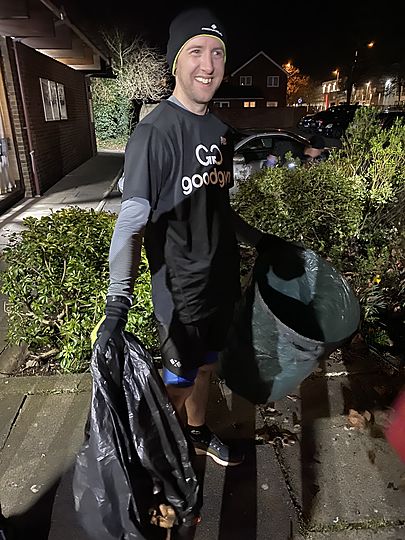 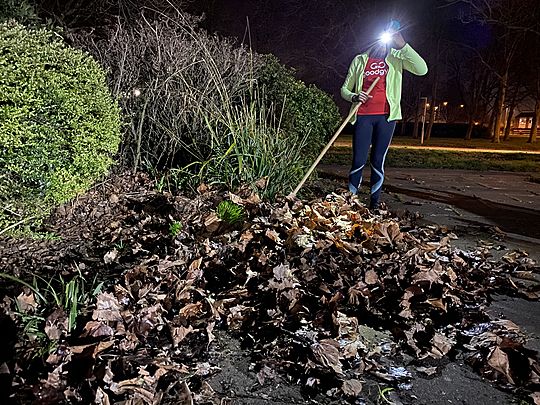 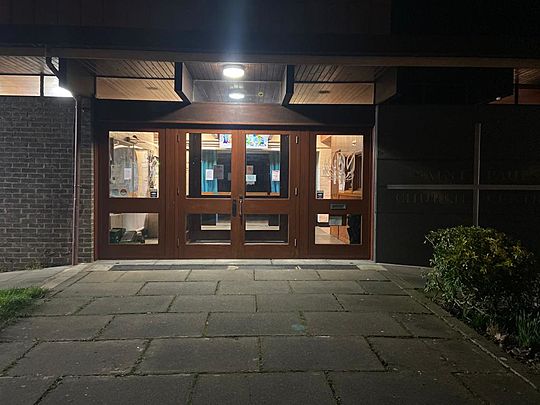 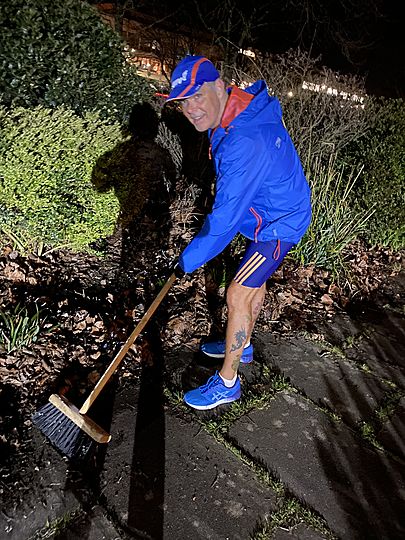 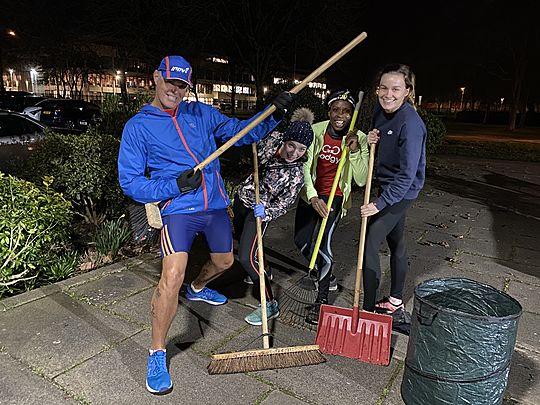 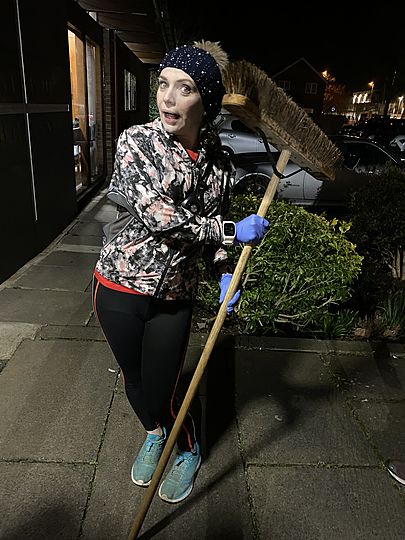 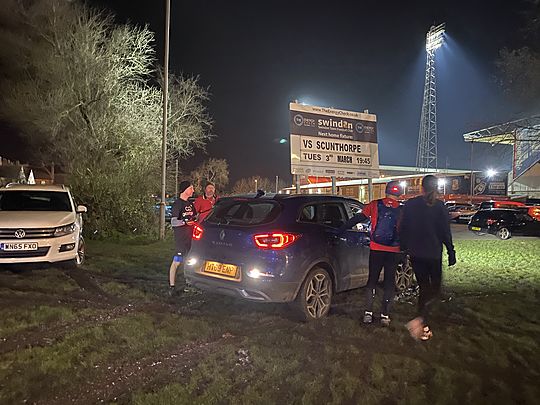 With a long run ahead, run leader Sandy Sam tackled the introductions with the efficiency of a Formula One pit crew. We were through the essentials in record time and then we were off, out of the pit lane and into pole position, racing on to Covingham. This was our longest run so far and absolutely nobody (!!) was heard saying "are we nearly there yet?". When we arrived there were cries of false advertising as we'd run a whole .6 of a km further than the advertised distance, but secretly pleased that we'd made it!

St Paul's Church and Community Centre is large multi-functional building which is used by various community groups. There was a last minute change of plan as Just Jive use the hall and kitchen on Tuesday's, where we were due to do some cleaning. So instead we decamped outside to spruce up the flower beds which were weighed down with winter leaves.

With GoodGymers outnumbering the tools by three to one and in the absence of our trusty gardening gloves, we invented new roles of 'Leaf Transporter', 'Leaf Illuminator' and 'Rubber Glove Monitor'.

We busied ourselves with removing as many of the leaves as possible and depositing them round the corner. We'll admit to some counter-productive techniques with some sweeping the odd leaf back into the flower beds, while others were busy tackling the millions that were still in there.

Helen was having a spot of bother with her chest lamp, where it proved impossible to both sweep leaves and illuminate them with her lamps at the same time, so Tracey stepped in with her chest lamp, and full leaf sweeping duties resumed. Meanwhile, Lily who hadn't got the memo that we only had three tools, decided to deploy her infamous metal bending skills on the one and only large rake (arguably the most useful of tools when raking leaves!) and it was soon sporting a perfectly formed 90 degree bend and rendered virtually useless. The rake didn't stand a chance under her magical aura. Uri ..... sorry Lily, will have her tool privileges reinstated when she can demonstrate that she can keep her powers firmly under control.

This is the second time such a scandal has occurred - three strikes and you're out Lily Geller!

By the time we were done, the spring flowers were much more visible for visitors than when we'd started.

We're GoodGym, so we love running, really we do! but some entertainment was needed on the long run back so chatter ranged from favourite pizza toppings to favourite hair removal techniques. Stuart definitely does not shave his legs - he was asked this on account of his being tanned and the question bearer seeming to think that the sun on his recent holiday would not have been able to do that if his legs had been too hairy!?! The run back took us past Swindon football ground where they were playing at home to Scunthorpe. Eagle Eyed Andy spotted a fan who's car had got stuck in the mud. GoodGym to the rescue, and with a bit of muscle power we soon had him and his young passenger out and on their way. We're not copying GoodGym Crewe in their angel-esc car rescuing activity, honest!

With all that to distract us we were back at base in no time. A special mention has to go to Helen who ran her longest distance, enveloped in that GoodGym encouragement which we all know and love! And someone did their 49th good deed tonight! Should we warn GoodGym HQ to have a shiny new black t-shirt on standby?

On Tuesday 10th March we're returning to Age UK Wiltshire in Toothill, a run of approx. 8km in total, to complete a painting task that we started two weeks ago. We loved our last visit! Sign up here!

It was a long run but lots of fun. And that’s why we all love GoodGym ❤️ Thanks Tracey for another brilliant Run Report 👍

Sounds like a great evening! Sorry I missed it 😷😴

Brilliant report Tracey 😂 - loving my Tuesday evenings with you lot 🤣🥰