A Rabble of Lovely GoodGymmers

7 GoodGymers made their way to help the Royal Greenwich Heritage Trust in Greenwich. 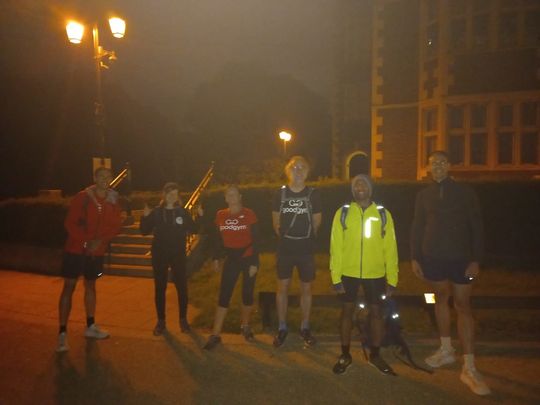 This Sunday in Charlton comes the fair once described as the yearly collected rabble of mad people. As well as, in the Daily News in 1872, a reign of the Lord of Misrule.

Of course, this is surprising GoodGym fodder, and I for one felt shivers at the prospect of flyering for such an event.

Thankfully however, the Horn Fair these days is a celebration of life that’s staged in the decadent grounds of Charlton House and Gardens, in collaboration with the Royal Greenwich Heritage Trust. On offer will be numerous dance performances, a new kids’ zone run by Charlton’s new Montessori Moments nursery, and gastronomic delights including Jamaican rum cakes and local mead.

Last night, seven GoodGymmers met outside Charlton House to bang the drum for the upcoming event. We had reams of leaflets and were dispersed into a group of three and four, and we headed in opposite directions.

Julian, Debs, and I quickly got onto residential streets with the help of Julian’s local knowledge, and we fed leaflets into letterboxes until our hands were empty. Then, we jogged back to Charlton House, buoyed by our timeliness, and shortly afterwards, we were joined by the other group. We nattered for a short while and then asked a passer-by to take a photo, and that was a wrap to a lovely GoodGym evening.

And remember, if you’re at a loose end this coming Sunday 17th October, then pop down to the Horn Fair at Charlton House and Gardens between 11am and 4pm. I expect it will be a rabble of community and zing that will keep the Autumn cold away!

Area Activator at GoodGym Greenwich. I love community and getting to know all the great initiatives and people that make it what it is!