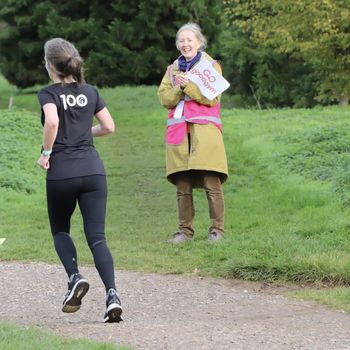 "International Women's Day (March 8) is a global day celebrating the social, economic, cultural, and political achievements of women. The day also marks a call to action for accelerating women's equality. IWD has occurred for well over a century, with the first IWD gathering in 1911 supported by over a million people." (The IWD website - click here to visit and find out more).

This IWD Quest is so much more than just a 'training session'! It is GoodGym Windsor and Maidenhead's way of celebrating the achievements of women in our borough. It is scavenger hunt meets history lesson. It is life inspiration meets exercise motivation. It is route planning challenge meets guide book.

Thank you also to Amanda Quincey, Nicola Hine and Jen Simpson, who contributed to the list of 30 women.

Making a splash at the library

Maidenhead's Big Read are putting on a brilliant ocean-themed festival this weekend, and they asked us for help creating sea creatures to decorate the library. It dolphinately wasn't your typical GoodGym community mission, as we made the creatures at home, in our own time and often with help from our families, but it was whaley fun!

I found that cutting out a large carboard sea horse, shark and other marine friends made for a surprisingly good workout, and others got fit on their journeys to deliver the creations to my house. Kudos to GoodGymer Tessa Allanson, who is on the Big Read Committee, and did a beautiful job of hanging up our handiwork in the library windows on Monday morning.

I took my children to check out the display on Monday afternoon and it looked fin-tastic! From turtley awesome sequinned creations and s-gill-fully crocheted fish, to a 'Mr Blobby' Octopus (who looked like he needed a wee), we really made a splash!

You should make a trip yourself to sea the displays this weekend, and to enjoy the Ocean Alive! event. Check out the o-fish-ial programme for the weekend by clicking here. There is lots to entertain both children and adults - from story telling and visiting authors to an incredible Ocean Dome in the amphitheatre. The events are free but you can book tickets to secure your space.

Tessa has already done 25 good deeds with GoodGym. Instead of doing anything else, they've used their run to go and help people that need their help; digging, lifting, scraping, clearing, planting and weeding. Stuff that makes this a better place to be.

The runners met at Homebase for a short 2.5km route around the town before meeting the walking group and other GoodGymmers at the task location to continue sorting through the mountain of donations. Our task owner suddenly realised she had left the black bags in her garage so we needed a Lidl help from the closest supermarket and Apple Pay since we had no cash!

The group worked hard for an hour and sorted another 43 bags. Go team!! We then stopped to celebrate 2 epic milestones, the first two Windsor & Maidenhead members (other than our Skipper Amy of course), to have reached 100 good deeds and graduated to "angel wing" status.

Sadly Amy was too unwell to join us but she made sure we celebrated in style by making medals for our 2 heroines, providing angel wings and writing a fabulous poem which she recited via FaceTime:

Sheila and Jess, true Taskforce heroes! Now both count their good deeds with a 1 and two zeroes.

Jess has been with us right from the start, She practically has GoodGym tattooed on her heart. No matter the weather, she does good deeds, And has even been known to speak to the weeds.

Sawing, digging, or plogging, she always works hard, And did you know she makes a super cross-stitch card? She’s always game for a pancake toss, And when it comes to sorting puzzles, she’s the boss.

If you need someone in goal, she’s number one, But footie can be dangerous – just look at her thumb! We all know she is a keen parkrunner, But it clashes with coaching – it’s such a bummer!

Jess, we are lucky to have you among us, And I’m sorry I forgot about your allergy to citrus. I always have fun with you on my team, Jess you’re the cream of the GoodGym cream.

Now Sheila actually just joined us in May, ‘Was it really that recently?’ I hear you say. Yes, Sheila the legend is relatively new, But she’s planted more trees than me or you.

From vaccination clinics to the waterway, Sheila often does good twice in a day. In January she did more than Westminster or Crewe, And all that with an injured foot in her shoe!

She’s handy with a broom, secateurs or a rake, And for her fiftieth good deed she even baked her own cake. I bet she would also be handy with a spanner, And did you see her bunting and her GoodGym banner?

For GoodGym she’ll cycle over 20 kilometre, And she’s responsible for recruiting the lovely Anita. Sheila, though we have to share you with the netball crowd, You’re a true a star and you should be proud.

Sheila and Jess are amazing, make no mistake. Now I’ll shut up and we can all eat cake!

Georgeta and Tara baked some delicious treats and Sophie bought the bubbles! Jess and Sheila you are both legends!

The group then made their way home and we will return again to continue helping this wonderful charity and to work off the large intake of calories consumed!

This evening's session was going to be a group run, but Area Activator Amy is unwell so has reluctantly been forced to cancel. This community mission will take place instead, with the same task - sorting donations at Slough Refugee Support Depot in Maidenhead. This will be our fourth session helping this charity in the last couple of weeks. So far we've sorted an impressive 129 bags. How many more can we blitz tonight?

Speaking of impressive numbers, this evening Jess and Sheila will both reach the amazing milestone of 100 good deeds - we can't wait to celebrate!!

If you still want a social run or walk before the task, then you can still head to Homebase for 6.45pm as per the original listing. Look out at the bottom of this listing for the opportunity to sign up for that part of the evening.

The depot is large and well ventilated, but the GoodGym Covid guidelines request that we take the additional precaution of wearing face masks.

Anita, Tessa and Sheila answered the call by the Baby Bank to have an emergency session to help clear their mountain of donations before they move premises. All the bags of donations waiting to be sorted were piled into travel cots, so our task was to sort as many of these as we could. By the end of the session we were pleased to have cleared one of the travel cots - a rare sight. Still more to be done, but we look forward to helping out with the actual move when this happens

Extra session at the Baby Bank

Thu 17 Feb 09:30 am
Map
4 Providence Place, Maidenhead, SL6 8AG
Sign up now
Help this vital charity with a big sort out before they move premises

The Baby Bank helps families in extreme need with everyday essentials such as nappies, wipes, school uniform and shoes, as well as larger items such as cots and buggies. They are completely volunteer run and rely on donations .

They will soon be moving premises, so need more help than ever with getting everything sorted.

The entrance is down a couple of steps opposite Monello Hairdressing. Look for a red door and the pull up stand with the Baby Bank logo. If you get lost call Amy on 07939487106.

This task is indoors and face coverings are mandatory. It can also get very chilly in the storage facility so wrap up warm!

The task is listed for an hour but there may be the opportunity to stay and help for longer.

Complete at any time to suit you before the evening of 27th Feb.

It's o-fish-ial! Maidenhead's Big Read festival is coming to town, and they need our help creating some fin-tastic decorations for the library. This is a chance to get creative, be active, and help inspire a love of reading in our local community. Sounds whaley fun! Here's what you need to do:

2. Get crafty and make a sea creature.

3. Run, walk or cycle to deliver your creation to Amy's house. This is the 'gym' bit of this community mission! If you don't know where Amy lives, please message 07939487106 or email amylovell@goodgym.org for details. Please do this **before 7pm on the 27th of Feb.**

4. Pop the Maidenhead Big Read festival in your calendar for the 5th/6th March and make sure you run, walk, or cycle into town that weekend to admire our creations, listen to a story, have a read, buy a book, or check out the ocean dome. Click here to check out the programme.

We had so much fun playing running tag last year, we've decided to play again this month. Hopefully it will motivate us all to get out running (or walking!) a bit more, give us a bit of route inspiration, and help us open our eyes to landmarks and vistas we might not have noticed before in our neighbourhoods.

Tessa Allanson signed up to a group run
Group run

Please note that this group run has been cancelled.

Slough Refugee Support have been overwhelmed with donations, but sadly a huge proportion are not fit for purpose. On this evening's group run/walk we will head to their depot in Maidenhead to help them clear their donations mountain.

As this is an indoor task, the GoodGym Covid-19 guidance calls for face masks to be worn.

We will start the evening with a welcome and briefing in the Homebase car park on Stafferton Way. Our run or walk will take us onto the Greenway (the bit covered by Maidenhead parkrun), so head torches are a must! The distance will be 2-4km, depending on how far and fast you want to go. We welcome all fitness levels and will make sure no one is left on their own.

We'll then head to John West House on Howarth Road, where we will help Keriann with the mother of all donations mountains!

We'll finish with a fun fitness session and stretches before the short hop back to Homebase to say farewell.

Can't wait to see you there!

Extra session at the Baby Bank

Meet outside Monello Hairdressing, which is very near the Baby Bank's facility.