Would a GoodGymer Lie to You?

13 runners ran have an amazing time in Swindon. 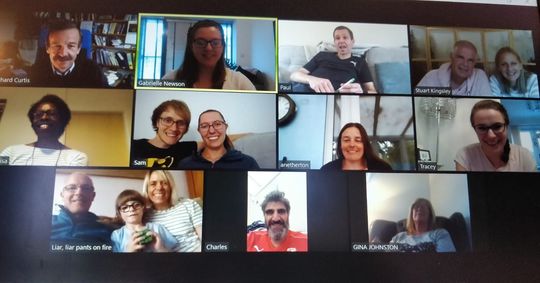 This week GoodGym held another general knowledge quiz. Okay so that was a lie, but putting in a porkie was the order of the day as we held our first ever version of the TV series "Would I lie to you?" Participants had to give three statements, one of which was a lie but could you out fox everyone and make your lie so realistic that we wouldn't believe it was a genuine fib?

But first of all, this week's icebreaker (thanks Stuart) was to state what you were looking forward to once we come out of lockdown? Despite a couple stating that they were actually enjoying the lockdown experience, others were looking forward to haircuts (me), Wagamamas (Lily) and getting back to her native Wales (Tracey) but the majority were looking forward to being able to finally visit family and friends with lots and I mean lots of hugs! Then it was quiz time and I doff my hat to everyone who came up with the most convincing of lies. Who would believe you could complete a Rubix cube in seconds, run over their future husbands, crash a milk float and sit next to Suzi Quattro in an aircraft and not realise it was her? And as for drinking out of shoes, well you can make your opinion of that. Of course we did have a few odd strange announcements like having a photo of your bum in the newspaper and going to Amsterdam with an bloke called Elephant but it was a fun evening with both Ashleigh and Stuart being crowned the winners with both of them guessing six correct, well done both of you.

Emma informed everyone that with the current circumstances there is little possibility of GoodGym returning to how it was before lockdown however missions and community missions are still aplenty and this weekend we have the GoodGym litter pick community mission at Seven Fields, Coate Water and on the old Purton Road. Litter pickers have been duly obtained and making sure we keep the necessary 2-metre social distancing, we look forward to making Swindon that little bit smarter this weekend and making sure we once again spread the GoodGym name out and about. If you wish to join us, check it out here and let us know via the Whatsapp group.

In the meantime, stay safe everyone.

An evening with a difference Charles. It's amazing how easily we all lied so convincingly!! Thanks for organising and your report is great.

A great evening with lots of laughs. Thanks for organising this Charles 😊