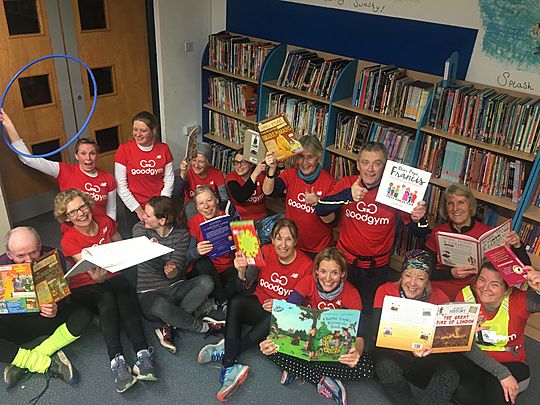 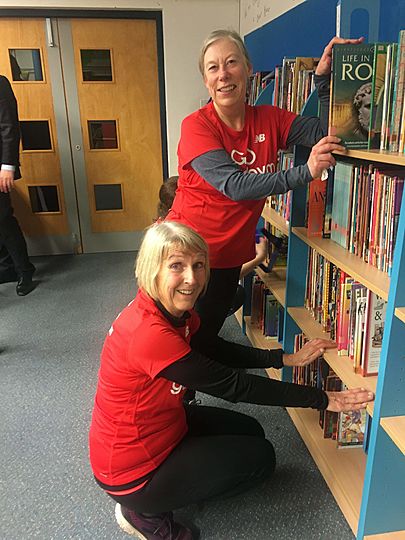 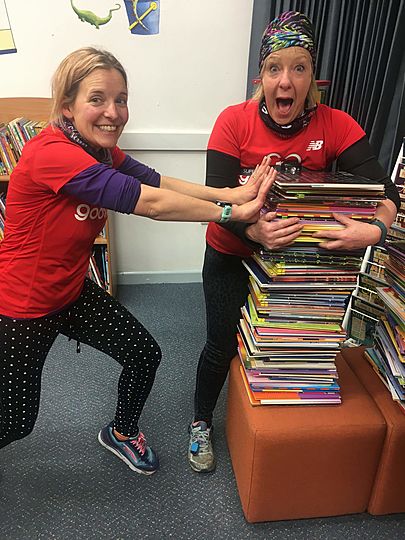 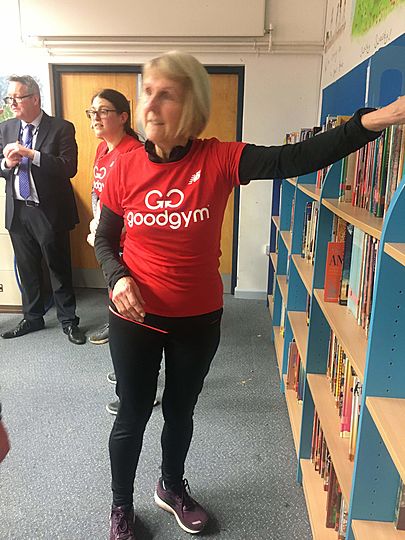 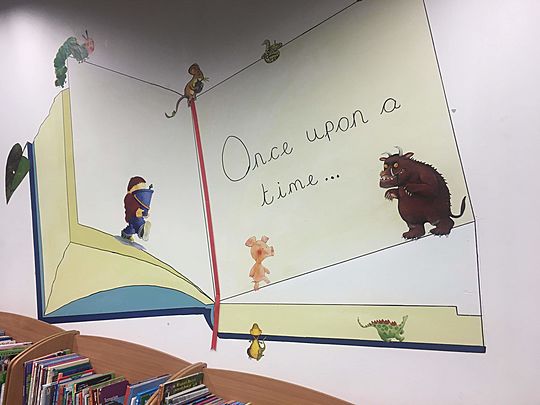 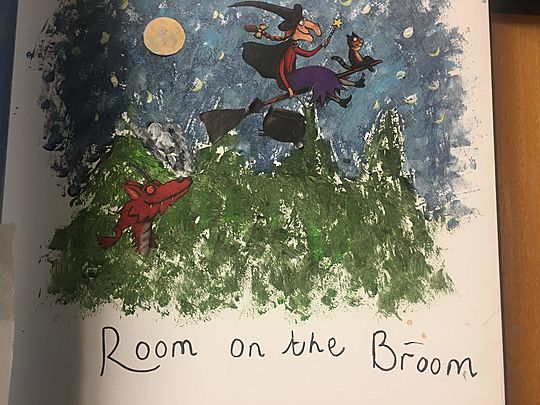 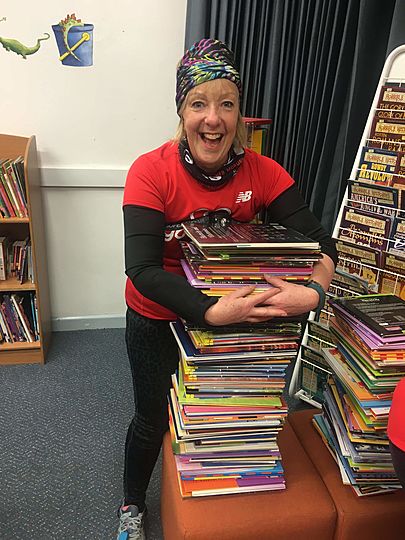 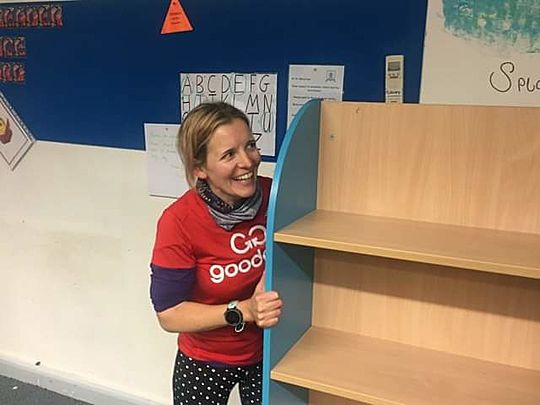 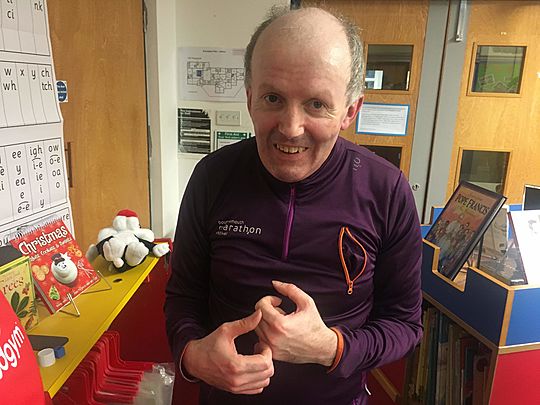 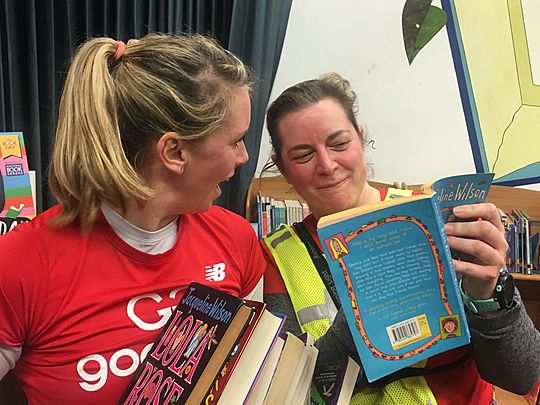 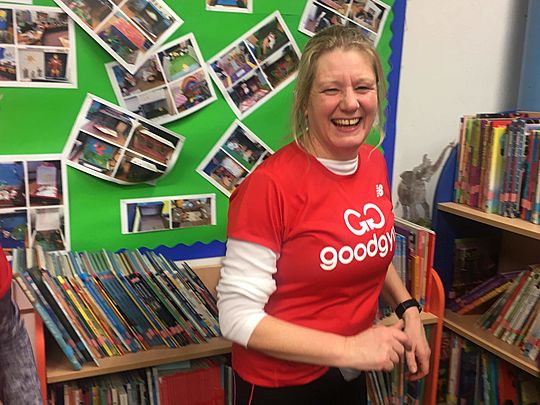 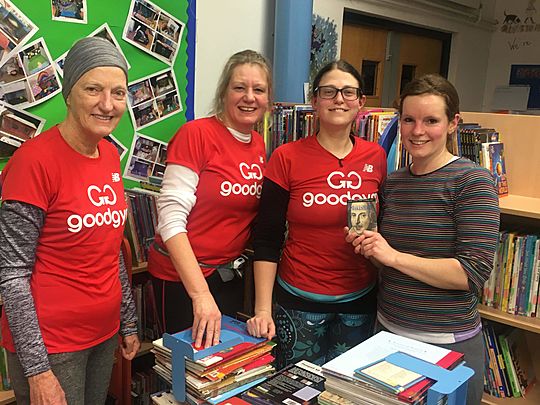 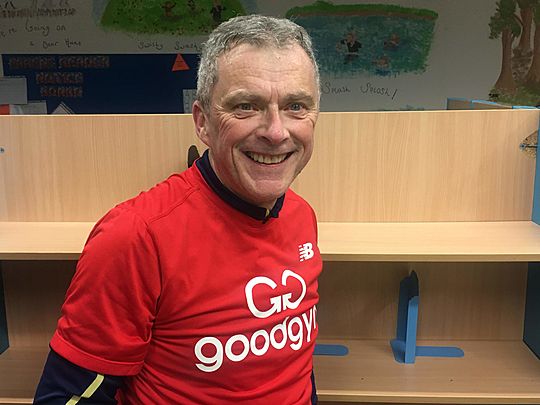 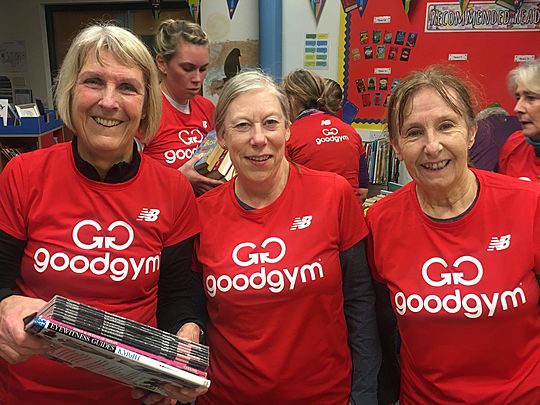 What a change from last week!

It was dry, crisp and even a little icy tonight as we all met inside the cafe, those that came last week just a little smug against those that bailed due to pretty horrendous weather! (Tim you had that look!:)

First off - Great to be joined by a fellow runner Marie who is new to Poole but not new to Goodgym! Marie has run some good deeds already up in London so we are really pleased she has looked us up here in Poole. We hope you come again soon to join us all!

We were really pleased to be able to return again to St Mary's School - each time we have had great tasks and we had no real details of this one so it was hotly anticipated!

But first there was 30 mins for a run and some warming up to be done! Onto the back streets of Heckford Park for some running! Having found a nice dark block - we got to go round it a few times. Job Done! All about adding those little bits of speed in! Sarah then took us around the dark back streets of Poole till we appeared at a pitch black alley way she assured us was our way to the school. Thankfully she was the local of these parts and we appeared just outside the school a few minutes past 7 where Andrea was waiting for us having taken a shorter run / walk.

This week we were met by Mr Simon Thomas, acting Deputy Head of the school. We were delighted to hear that we were in fact working in the library tonight to move books. It sounded simple - empty all books off shelves, move cupboards, put books back on shelves! Just with a little rule to follow - the books must go back EXACTLY in the order they were originally in! Two teams were formed and it was clear thatSian had found her calling with her organisational skills! 4 shelves to each bookcase and each bookcase was a triple case. A couple of tables to place books on - stacked high, low and to the sides. It appeared chaos but 5 mins later, shelves were empty and cupboards going back against the wall. 10 minutes later than that and books were back on shelves! There was a few moments o f 'which pile' and 'was this left or right' followed by '...are you sure?' If Mr Thomas was fearing for his next liaison with the librarians he did not show it! Two triple bookcases moved and books back on it. It was a brain teaser as well as a physical task! A final little bookshelf to go (which nearly got jumbled up with the others) and the room looked very different. The plan was to create space for a whole class to come into the library instead of just 10 or so in a small area. Pushing the book cases back against the wall create a huge bit of floor space! It was task complete and ready for the librarians and TA's to make it their own again tomorrow. With 2 ex-teachers in the group, those that sent there kids to this school and those that hope to - it was a great to help a school again, especially one like this!

Quick piccie before a heading towards our infamous Birds Hill. Quick check it wasn't slippy and there was time for a few hill sprints. Richard showing his strength up the hills leaving the rest of us behind him...although Robert as ever giving it his best shot whilst Elizabeth showed us what good form was all about.

Nicola was happy to have achieved her desired mileage as part of her 2020 challenge - and a bit more, it was time for home!

The school have asked us tonight if we can help with stickering! Well, we are quite looking forward to it. We will be back in two weeks to sticker some books!

Great task tonight and made enjoyable as ever with great company!