4 runners ran 3km to help their local community in Huddersfield. 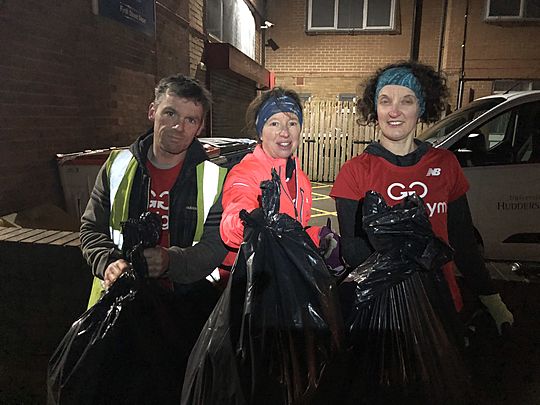 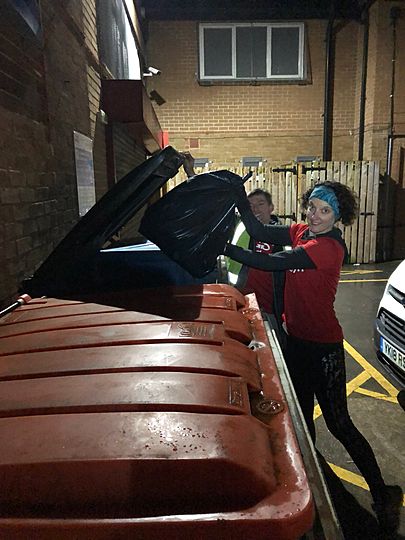 We were off to Snow Island on what was a snowy, or perhaps more accurately a cold, wet and sleety day in Huddersfield. Fortunately the worst of the weather seemed to have abated by the time four GoodGymmers left the Stadium for the short trot to our task. Located close to the town centre Snow Island is of course not actually an island at all, but rather a bend in the River Colne and an important green space providing a haven for humans and wildlife alike.

The area is managed by local environmental organisation Greenstreams, who have been responsible for installing the Riverside Way footpath, picnic tables and various other amenities. The proximity of the island to a number of large student accommodation blocks and the fact it acts as a short cut to the university means it tends to see quite a bit of traffic, which of course unfortunately and inevitably brings some issues with litter. GoodGym Huddersfield have “adopted” Snow Island as a pet project and as a group we return a number of times a year to undertake tasks to keep the area clean, tidy and functional.

On this occasion Jeff from Greenstreams had lined up the tasks for us, removing some non-indigenous young Buddleia bushes from the meadow area, clearing a path of encroaching grasses and brambles and removing some of the ubiquitous litter from the Riverside Way. As there were only four pairs of hands this would be a lot of work to do in our task time slot, so upon arrival in was on with the headtorches and gardening gloves and straight into the job. Whilst Kati Law and Ben Godfrey got busy with black bags picking litter, Zena Whalley and I located the spade and fork had I cunningly secreted earlier and began to do battle with the the Buddleia.

The stony soil made digging challenging, but the earth had fortunately been softened by the copious rain of the last few days. After about 25 minutes we had made some headway uprooting about 20 small bushes from the meadow area, so then we focussed our efforts on clearing the path. This turned out to be a relatively quick job and hiding the tools again for collection later, we turned our attention to finding Kati and Ben.

They were going great guns with the litter collection, having filled a couple of black bags on Snow Island, they had moved on to the area surrounding the Castings student accommodation block. The Riverside Way path runs directly behind the Castings and alongside the River Colne. It’s a lovely spot, although perhaps less so on a dark cold January night. What also makes it less lovely is the sheer volume of litter that accumulates on the path. GoodGym cleared the path of rubbish earlier this winter and now we had returned to find it as bad as ever.

It’s not just the usual drinks cans and crisp packets either. All manner of food tins, wet wipes, a blanket and even some underwear were to be found. It’s not a great leap of imagination to believe that the source of this rubbish could be from the student kitchens and flats directly above. Is it really easier to sling an empty baked bean tin out of a window than put it in a bin?

I really appreciated last night’s GoodGymmers turning out in such miserable conditions....as ever we really do make a difference.