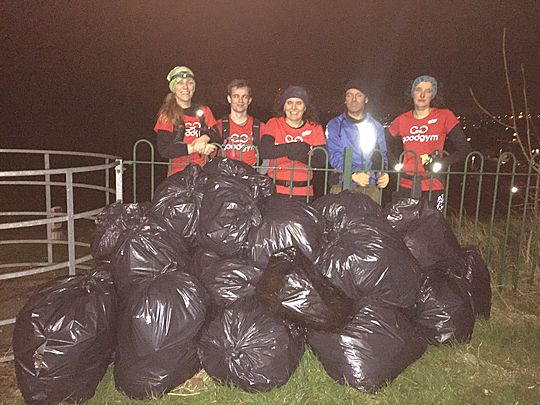 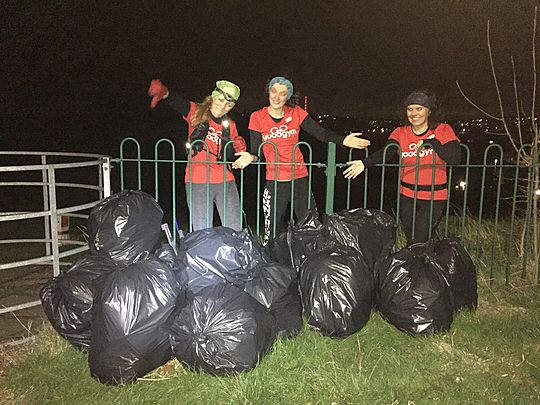 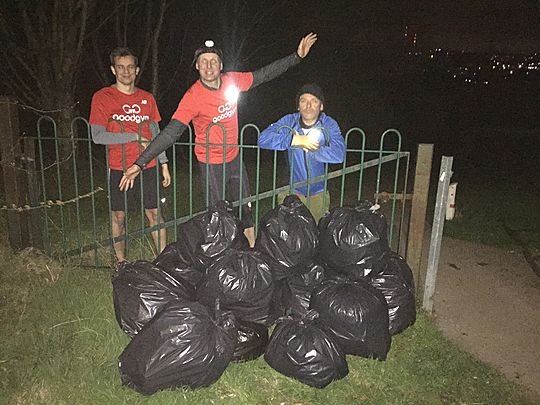 .....or perhaps more accurately de-littery geniuses, cos that is what GoodGym Huddersfield were doing last night. We were de-littering to the tune of 27 rubbish sacks, the contents of which were collected from Rawthorpe's recreation ground. 6 runners x 45 minutes work= 27 bags of litter removed from the rec....that’s a pretty good result in anyone’s book.

As ever the GoodGym crew were keen and eager to get stuck in and get their gloves dirty for the benefit of the local community, particularly as for the first time since October we were actually starting a run in the light! Admittedly by the time we had covered the 4K to Rawthorpe it was fairly dark, but none the less this little taste of daylight had whetted our appetites for finally doing some tasks on lighter evenings once the clocks go forward this weekend.

Reaching the rec and donning our headtorches (hopefully for the final time this winter) we surveyed the job ahead of us. The area of low trees and bushes fringing one side of the rec was absolutely strewn with all manner of rubbish. Some of the lighter stuff, crisp packets and sweet wrappers had probably blown there, but there were plenty of other heavier items which had obviously been wilfully chucked into the trees too.

With so much litter to alleviate a spot of friendly competition was called for, and with 6 GoodGymmers present, comprising 3 boys and 3 girls the obvious solution was to have a rubbish battle of the sexes. The challenge would be to find which group was the quicker litter pickers, and fill the most rubbish sacks in our 45 minute work window.

And so, gloves on and black bags in hand we were off, scouring the area for litter to pick. To be fair it didn’t take too much scouring, the rec was simply brimming with refuse. The girls got off to a fast start, with Kati Law (a self-confessed lover of litter picking) filling a sack very quickly. Louise Galvin was also going well, even with weary legs from the Kielder marathon at the weekend she was hoovering up rubbish from the rec at an impressive rate. The final member of the girl’s crew Fiona Armitage was also no slouch and soon had a bag filled, along with finding an old laundry basket and other discarded items deep in the trees.

The boys were deep in the trees too, with Chris Green tackling the mass of wind blown detritus that had become tangled in the thicket. Ben Godfrey was also going well for the boys, considerably aided by finding a black bag already filled with rubbish and obviously fly-tipped some time previously. Meanwhile I was doing my best not to let the side down, collecting what I could in between getting the odd photograph of our activities.

You can always tell when the GoodGymmers are working hard, as they go very quiet. There was actually very little conversation coming from the group as we laboured away, each individual focussed on doing as much de-littering as possible in an effort to establish whether the boys or girls are the top litter pickers. As the session went on the huge piles of black rubbish sacks, one for the boys and one for the girls, grew rapidly, and at 8pm time was called on the contest.

Then the moment everyone had been waiting for...the final count up. Following photographs of the teams with our respective rubbish mountains, and in an atmosphere of tense anticipation the bags were counted. As with all the best competitions the result was very close, but on the day the girls just edged it with a total of 14 sacks compared to the boys 13.

Of course in reality it didn’t matter who won, what really mattered was that 27 bags of rubbish had been removed from Rawthorpe Rec and the place looked better as a result. That’s not to say the job is done by any means, as I guess there is at least another 27 bags worth still there, but GoodGym will return later in the summer to have a go at clearing that too!

Following such close fought competition it was nice to have a relatively short run back to the Stadium, just about 1K down Bradley Mills Lane to round off another superb session. Thanks of course to all last night’s GoodGymmers for their hard work and commitment, once again your energy and enthusiasm has made a difference to our community...well done!

Thanks also to Sharon Doherty of Kirklees Neighbourhood Housing and Robert Whittaker from Kirklees Council for arranging the task.

Well done with the pun! Amazing work everyone!

Dalton Ward Councillor Musarrat Khan has asked me to pass on her gratitude to all the GoodGymmers who helped with the task on Tuesday night....well done all!

A Whole Lot of Allotment Jobs