It Will All End in Orienteers!

12 runners ran on a training session in Huddersfield. 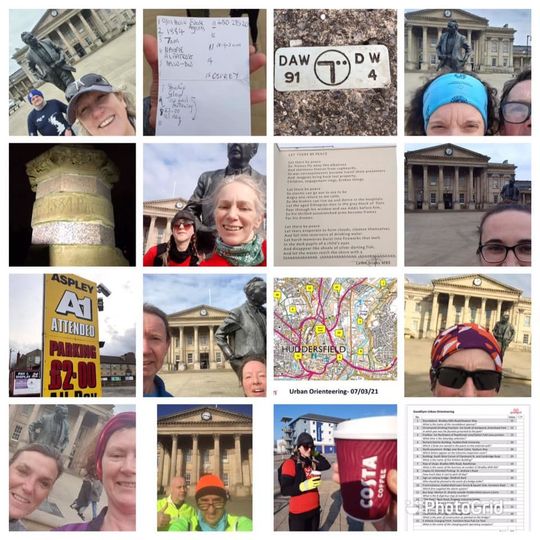 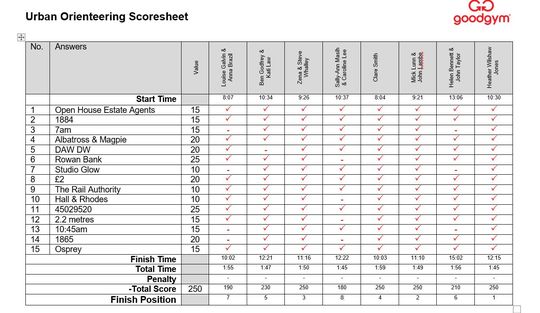 It will all end in Orienteers!

GoodGym Huddersfield very impressively turned their hand to a bit of urban orienteering today. With 15 checkpoints to locate, individuals and socially distanced teams of two spent two hours racing around the Huddersfield area with a map and a list of questions to answer relating to the checkpoints.

Ranging from the mundane "What is the name of the Stadium Way roundabout sponsor?" to the more obscure "Which two birds are mentioned in the Lemn Sissay poem painted on the wall of the university's Richard Steinitz buliding?", the event required swift running, quick thinking, plus the ability to plan the shortest possible route to find the answers at all 15 locations.

It was good to see a few new GoodGymmers giving the event a go, in addition to the regular crew and also one or two who we've not seen for a while. With the option of starting anytime between 8am and 2pm, the early birds got the best of the sunshine but possibly also cold fingers when using phones or good old pencil and paper to record their answers. By late morning most of the runners were out on the course, or back and messaging through their answers and finishing selfies of themselves outside Huddersfield station.

Just after 3pm everyone was home, impressively no one exceed the time limit and incurred time penalties. There were also a number of "Full Houses" with both individuals and teams managing to clear the entire course, visiting every checkpoint...particularly well done to you guys.

The results at the sharp end were tight with just minutes separating then top 3, proving that time really matters in this type of event. In third place scoring a maximum 250 points in a time of 1 hour 50 minutes was Zena & Steve Whalley. In second, again on 250 points and just a single minute quicker were GoodGym first timers John Lambe and Mick Lunn.
But todays winner was a solo runner and a GoodGymmer who we've not seen for a while. Heather Wilshaw Jones cleared the course, scoring 250 in 1 hour 45 minutes making her GoodGym Huddersfield's Urban Orienteering Champ. Well done Heather a great result and good to have you back.

Well done and thanks to everyone who took part, another successful GoodGym lockdown event I think.