4 runners ran to help the Maidenhead Waterways in Windsor and Maidenhead. 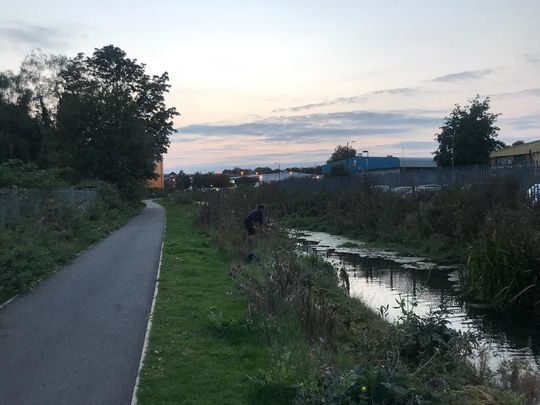 Allora, Claire, Raymond and Jess met Ian, from Maidenhead Waterways, at the weir and were issued with rakes and a new claw attachment for the infamous 4-metre poles

They walked a little way up the river and then began raking and clawing the weed out of the river and onto the bank. It was left there and spread out to allow any creatures caught up in the action to return to the river.

Raymond and Allora had a great buddy system working with alternate raking and clawing and Claire made short work of her section, getting brave on the bank and stating she just wanted to ‘get in the river and drag the weeds out’!! Jess could attest to the water not being ‘too cold’ as she was given an impromptu shower by the rake after forgetting the laws of gravity whilst resting her aching arms!

A definite ‘team work makes the dream work’ evening, (as declared by Allora) when Jess moved up the river and dragged weed downstream for the Claire, Raymond and Allora to drag out.

As the darkness drew in the team reluctantly reconvened with Ian and helped pack away the rakes, poles and claws.

If you want to get involved and have a go with rakes and claws on 4-metre poles, the next waterways task is Saturday 19th September (09:00-12:00)

And a ‘weedy’ good report 😆