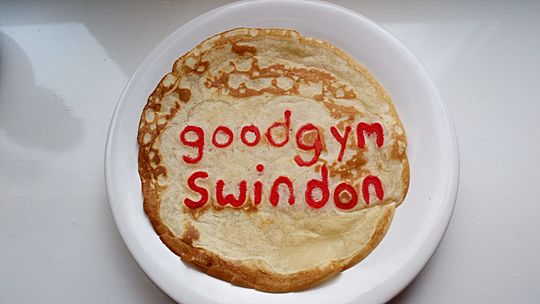 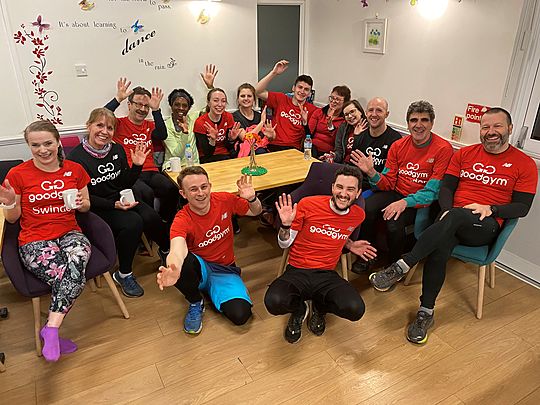 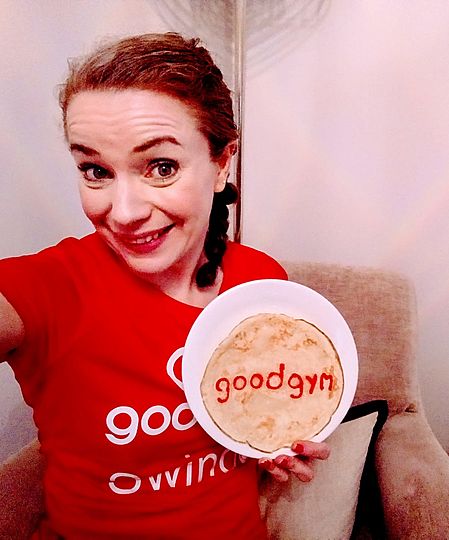 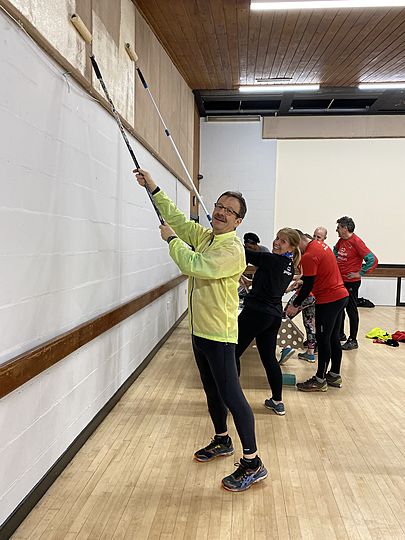 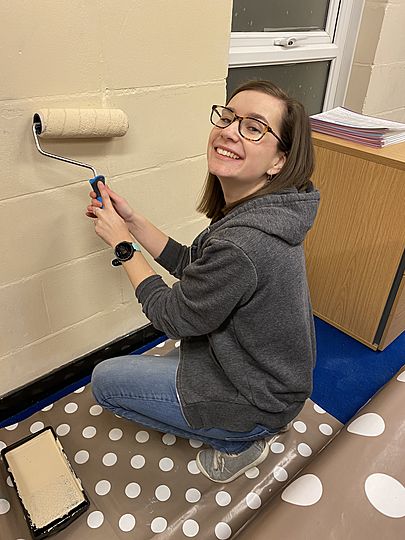 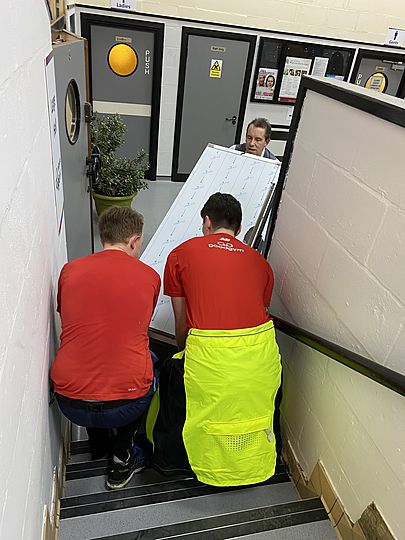 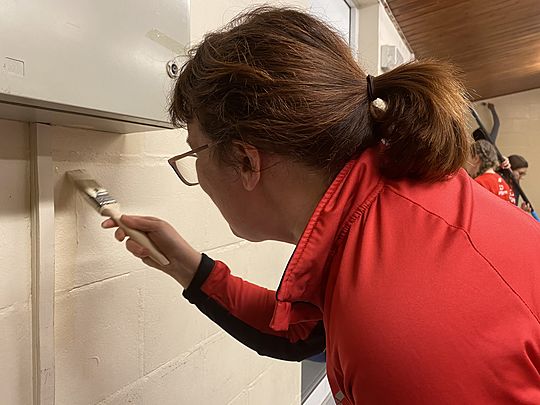 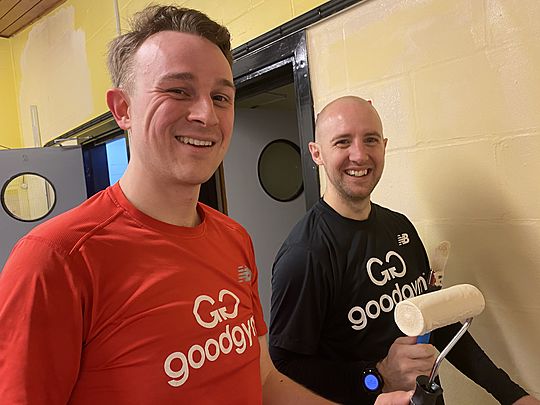 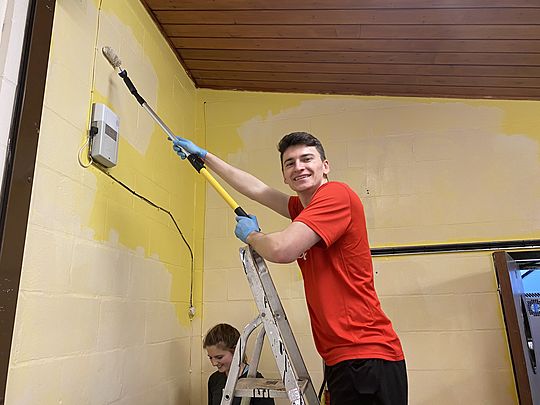 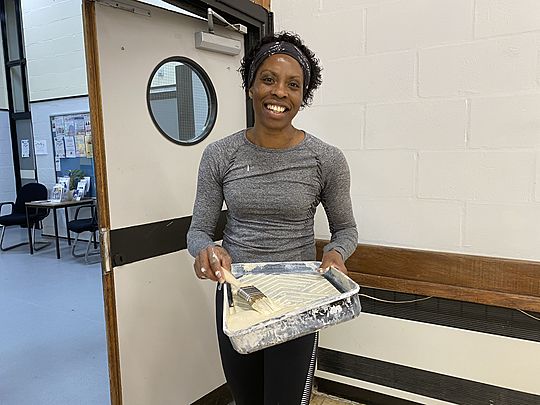 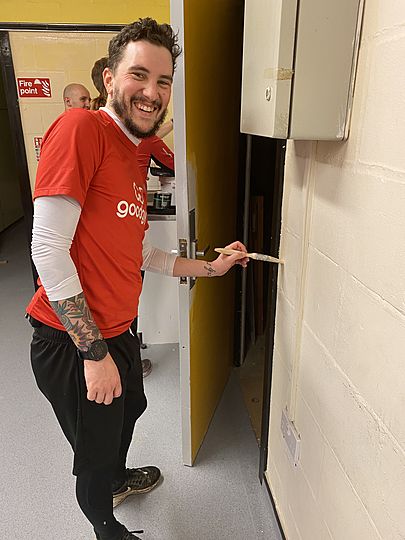 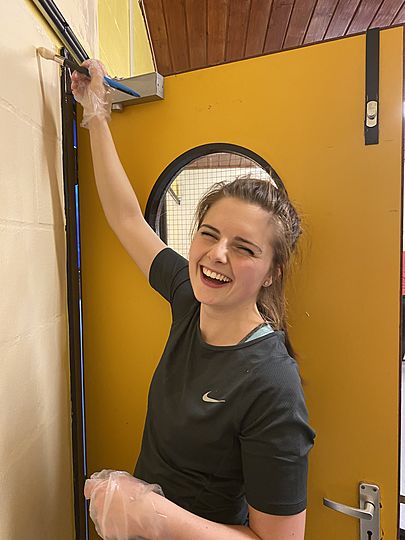 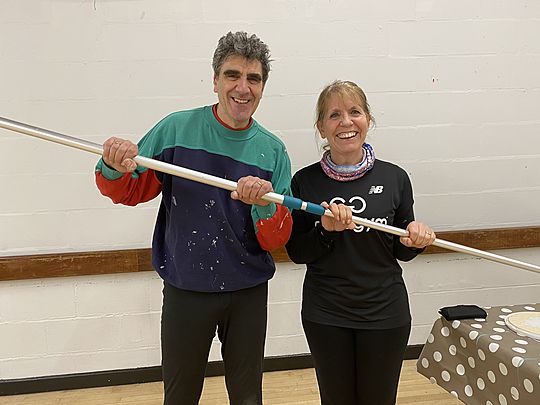 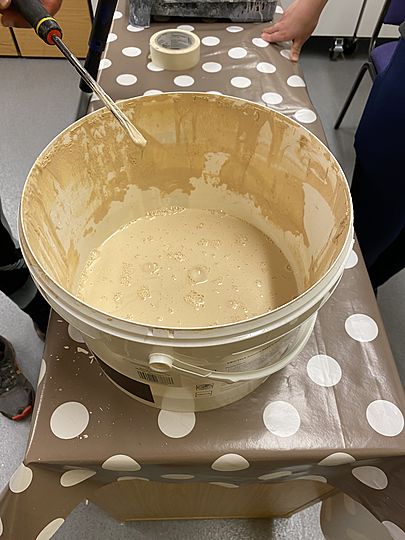 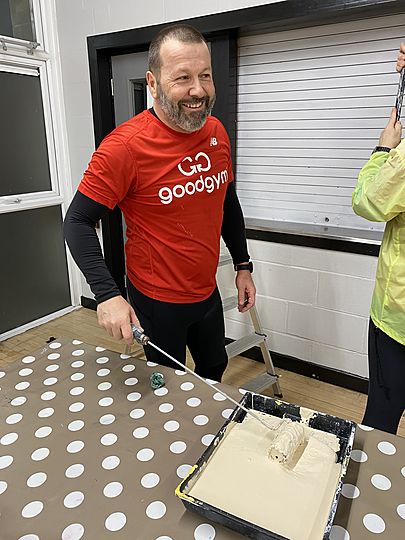 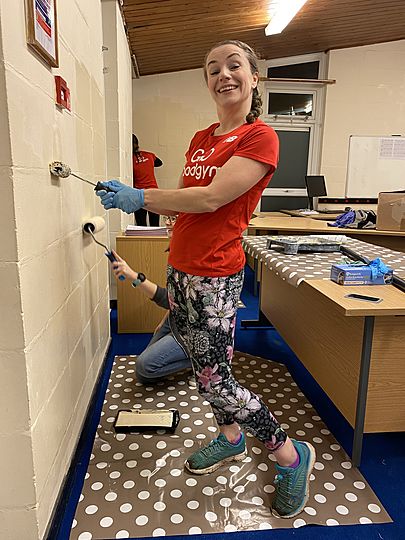 It was flippin' cold as we gathered outside the Oasis on Shrove Tuesday. Inspired by Tracey's GoodGym branded pancakes - with baked in red batter and not strawberry sauce, just in case there are any remaining doubters - we discovered there's a clear preference for the traditional lemon and sugar topping on our pancakes.

But it's Richard's impressive efforts in once eating 27 pancakes that will take some beating...although not all heroes wear capes, this red-shirted hero certainly eats crêpes!

With that, it was time to beat the streets and whisk ourselves away to Age UK at Toothill Community Centre with Charles leading the way and the Dodgy Bum Gang, hamstrung with hamstring and glute niggles, bringing up the rear. Matt was there to greet us at the Community Centre with everything prepped for our painting session.

Last time we visited, we painted the walls with paint of the consistency and colour of scrambled eggs.

After some work at the centre, they've had un oeuf of that, and our task was to paint the walls with what looked like pancake batter but was in fact magnolia paint.

We split into two teams with Helen, Richard and Jason taking on the high rolling activity of painting the upper panels in the large hall and the rest of us tackling the upper hall, including repainting that famous yellow brick wall. The not so mellow yellow paint was soon covered up, but it looks like a second coat will be needed so a return visit is on the cards. Was Matt yolking when he asked if anyone would like to take the eggy paint away with them? We'll never know as there was no one brave enough to take up the offer!

Regular readers will know that we love a hump and dump task in Swindon and tonight we squeezed in a bit of lifting and shifting of an enormous oven with Jake and Mike leading the way in the muscle-flexing crew. After all that exertion, Matt's offer of a drink in the lovely cosy café at the centre was very welcomed. Matt really was the host with the most, offering a variety of coffees, tea, hot chocolate, cold drinks, crisps and biscuits (including our favourites, Jammy Dodgers). Hannah was particularly excited to be offered a choice of regular or red Fanta - we're expecting the full tasting notes to follow! It was then time for the photo shoot - we're still not entirely sure what gestures Richard was making but if the photos are a bit blurry, it's because we were all laughing too much at his slightly unusual interpretation of jazz hands.

The café is such a warm and welcoming place that we reluctantly had to head back out into the chilly wind.

It's a good job that Emma the Trainer had her motivational speech ready - "I really don't want to run back" was the inspiring battle cry!

Fortunately we're made of strong stuff and, under the moonlit sky with Venus shining brightly, we were soon back at the Oasis for more coffee and even more chat. There's a lot about Richard in this report, but he also tells that if we had a telescope, we would also have been able to see Uranus - it seems there's also a lot about bottoms in this report. And on that bum note, it's probably best to finish there!

If your goal is to get even fitter and do even more good in 2020, we have just the Community Mission for you. We'll be at Bridlewood School on Saturday putting up some football goals. The next time that Leap Year Day falls on a Saturday is 2048 - that's a long time to wait, so don't miss out this weekend!

Next week, we are running to a new venue - St Paul's Church and Community Centre - it's a longer run but there's plenty of support and encouragement and as always, the run will be backmarked, and no one will get left behind. We hope to see you there!

Hysterical 😂 Such a funny report and so many puns 🥞! Thanks Jo ❤️