22 runners ran have an amazing time in Swindon. 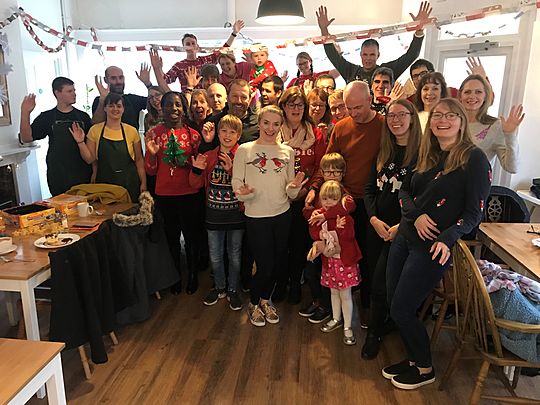 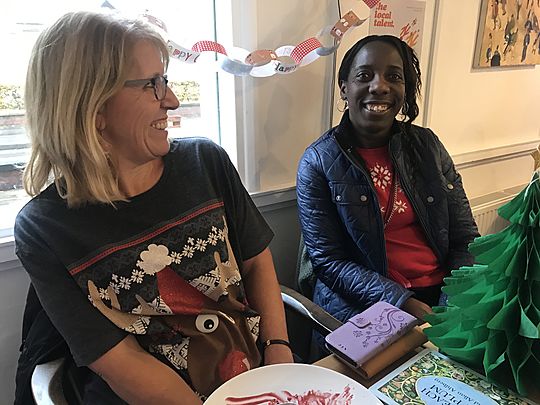 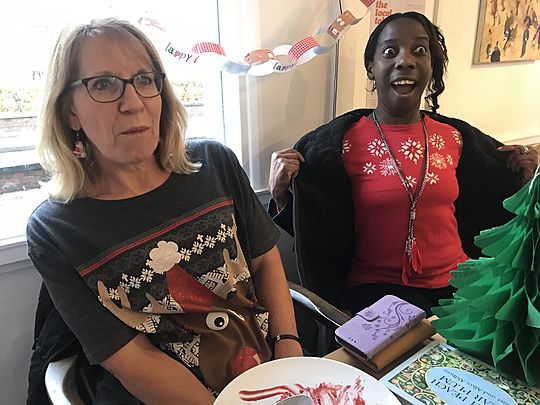 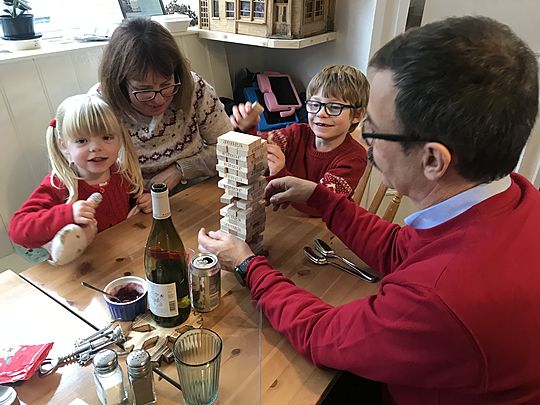 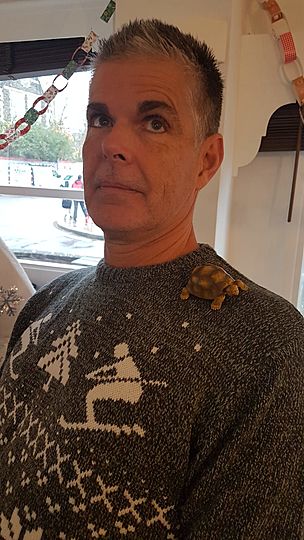 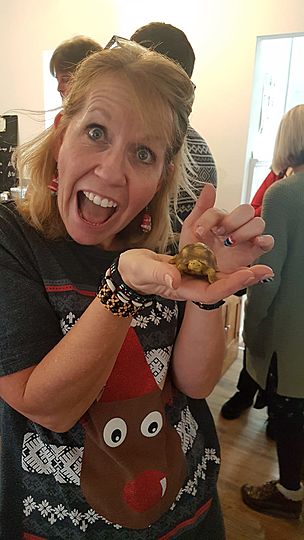 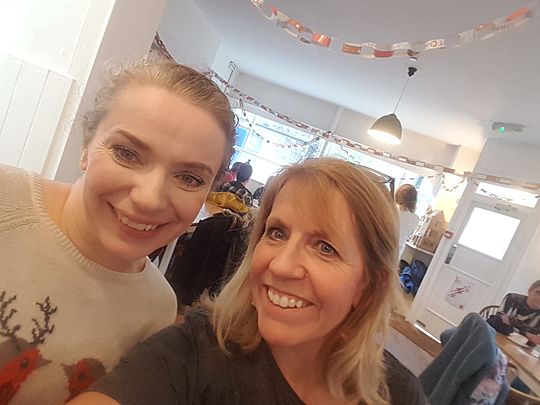 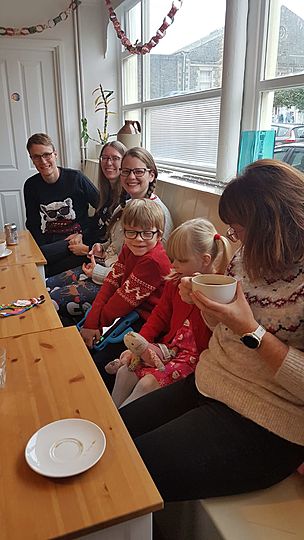 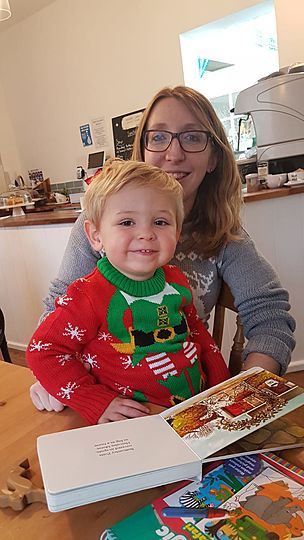 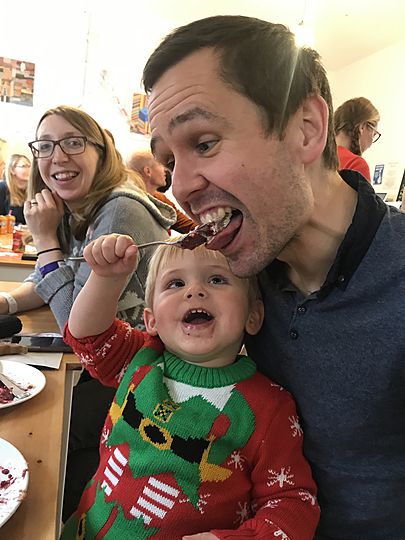 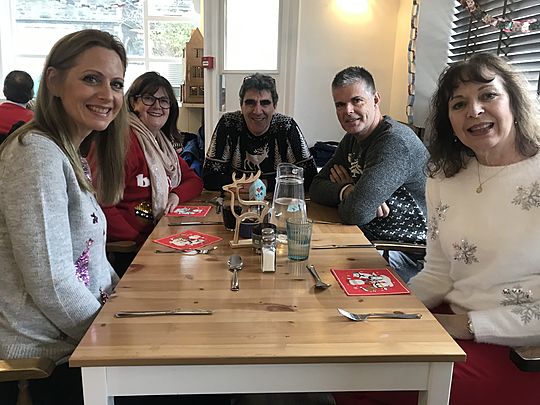 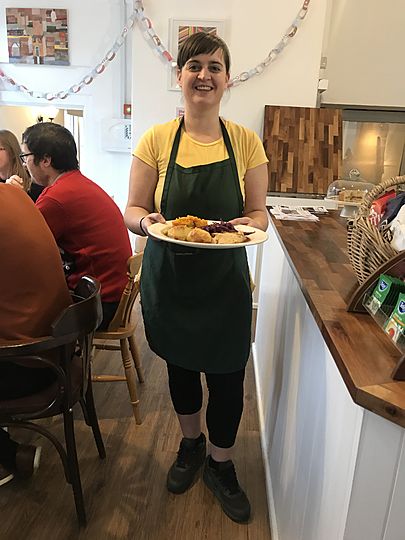 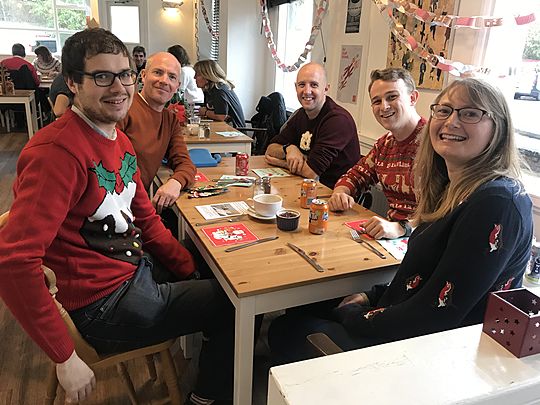 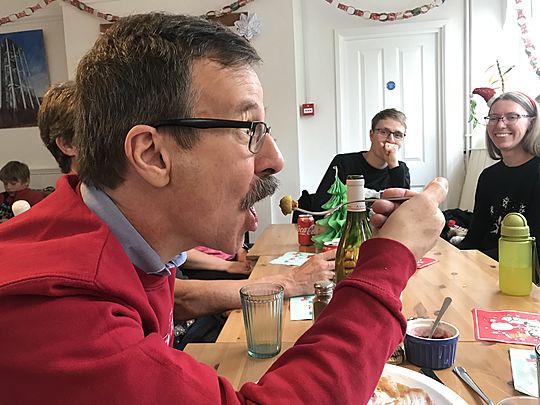 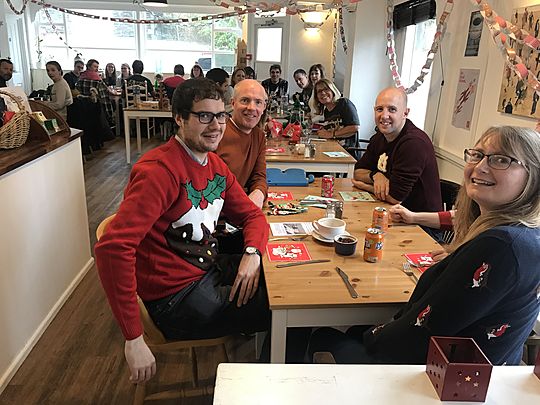 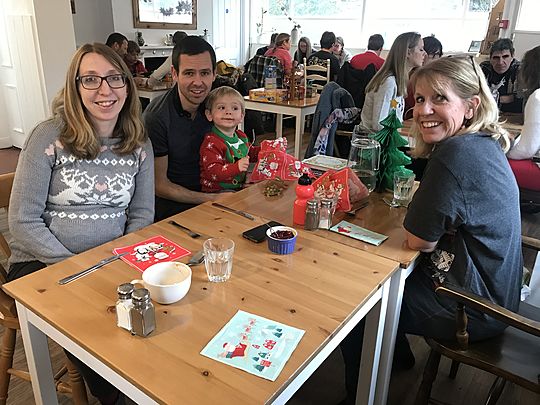 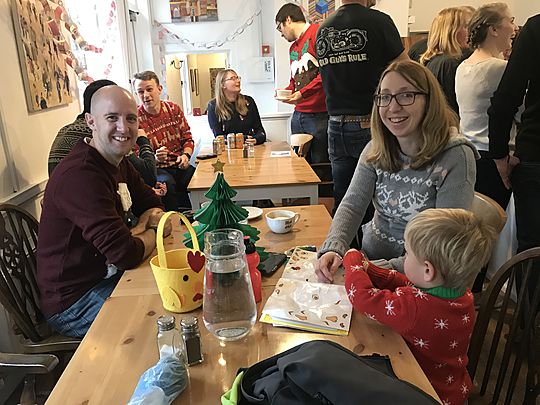 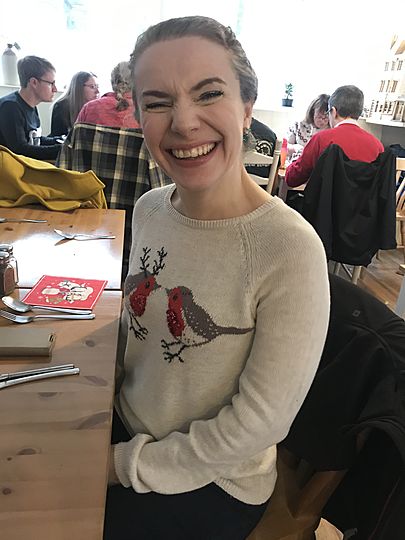 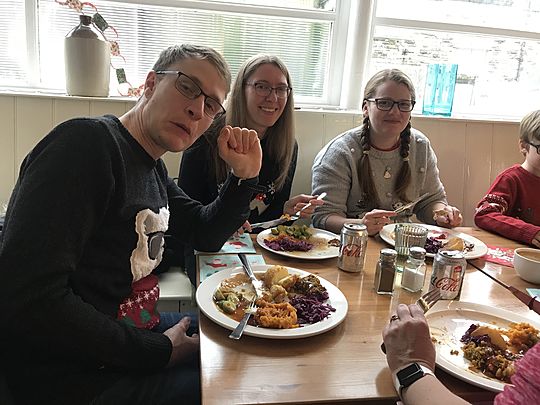 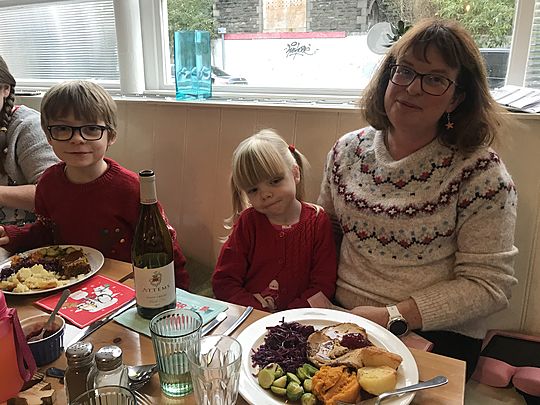 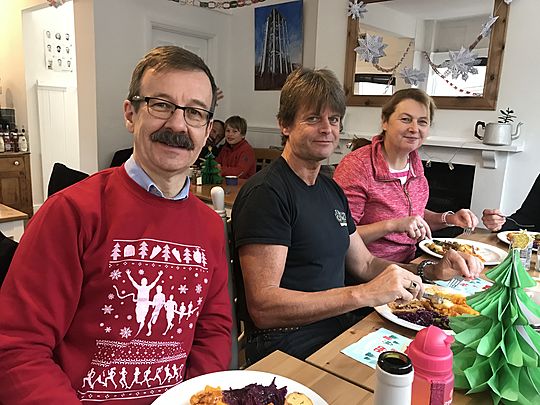 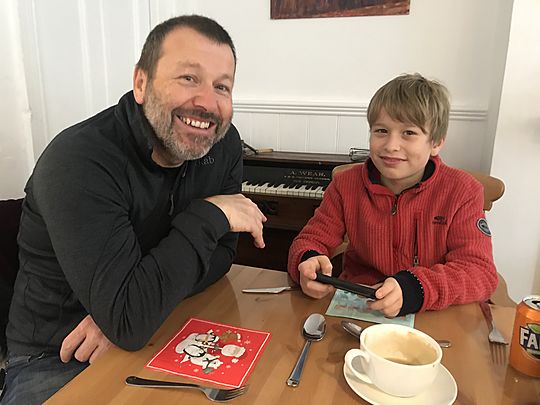 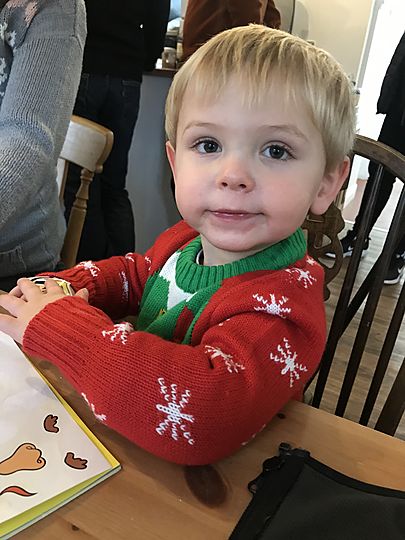 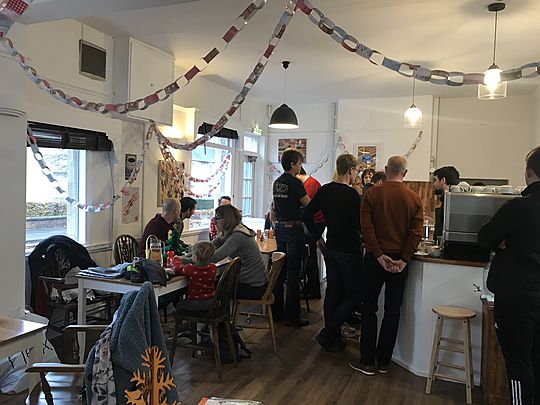 It's beginning to look a lot like Christmas at GoodGym Swindon and we're going to stake our claim for holding the first GoodGym Christmas party of the season. Due to significant life events in December for some of our members, we held our not quite Christmas Christmas party on Saturday at the Baker's Café.

The Baker's Café is a community café located in Swindon's historic railway village and is part of the Mechanics' Institution Trust. We've run here several times during the year and were excited to be able to enjoy the wonderful surroundings and much talked about good food in the lovely company of our GoodGym family.

Behind the scenes, Team Wolf had been busy preparing. Yes, it was meant to be Team Elf but sometimes autocorrect results in some WhatsApp howlers. We raided the shops of Swindon for paper chains and Tracey and Jo set to work - roping Jason into the chain gang too. With a few more decorations gathered on our travels, we were ready to deck the halls - and in true GoodGym fashion everyone helped and soon the Baker's Café was transformed into a festive grotto. The elf and safety police may have some issues with the chair clambering, but the Café is now decorated ready for the festive season - even when we're partying, we're still doing good! (And although I’m jumping ahead, special thanks to Ciaran, who at the end of the party helped with the washing up!).

With our best or worst Christmas knits on, and Christmas tunes in the background, thanks to Raving Rector Richard, the festivities could begin. It had been a rapid turnaround for most of us after parkrun, but we scrub up rather well. Top marks to Kirsty, for the most festive outfit - a hat trick of Christmas t-shirt, jumper and leggings. And in pants news, especially for Gina, I’m sorry to report that Elf and Safety First Simon didn't wear the ginormous brussel sprout pants unearthed at our recent Community Mission. Maybe he’s saving them for Christmas Day?!

Speaking of brussel sprouts, the delicious smell of Christmas dinner was filling the air - all down to the hard work of Hannah and Mike. And what a feast they had laid on for us - turkey or nut roast with all the trimmings. And while not everyone was a sprout fan, not a lot went to waste with our healthy runners' appetites. There's always room for pudding and we quickly devoured honeycomb and chocolate cheesecake and gluten free New York cheesecake - we are cake connoisseurs and these scored top marks!

We often talk about our GoodGym family and what we've all gained personally from GoodGym, while getting fit and doing good in our community. So how lovely to hear from Hannah and Mike that while they were slaving away over a hot stove, they could hear the joy and happiness as we chatted and enjoyed each other’s company.

It really did feel like all the best bits of a family Christmas...

And you can't have Christmas without board games. Out came the fiendishly difficult 3D Connect Four and the all-time classic, Jenga. It soon became very competitive with Luke, who quickly declared himself a professional, taking on Adam the speedy Jenga Ninja Warrior - never have Jenga blocks been moved so fast! Shouts of Jenga filled the air as we played one last game over and over again...until it really was time to go ho ho home!

What a fabulous way to start the festive season. Now you're in the Christmas spirit, here's some more festive Goodgym Swindon fun:

On Tuesday we'll be the GoodGym Christmas Fairies at Ferndale Primary School helping to put up the school's Christmas Tree and Decorations. Wear your tutu and fairy wings!

Brighter Futures needs our help at the Santa Vs Rudolph Run on 1 December at Lydiard Park. Sign up to be a marshal and make sure everyone reaches the finish line safely!

On 14 December we’ll be supporting Prospect Hospice with gift wrapping – sign up to get into the festive spirit with Jo and Tracey! You don’t need to be an expert wrapper – if you can shake a collection bucket, you’re perfectly well qualified to help!

What a fabulous party 🎅🏻 we had yesterday. Thanks so much Jo and Tracey for organising! 🎄