All Present and Collect

5 runners ran to help their local community in York. 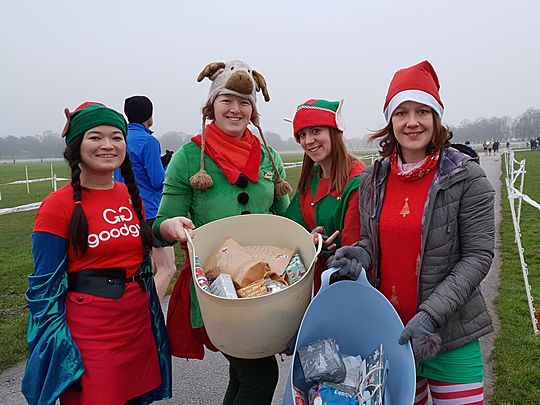 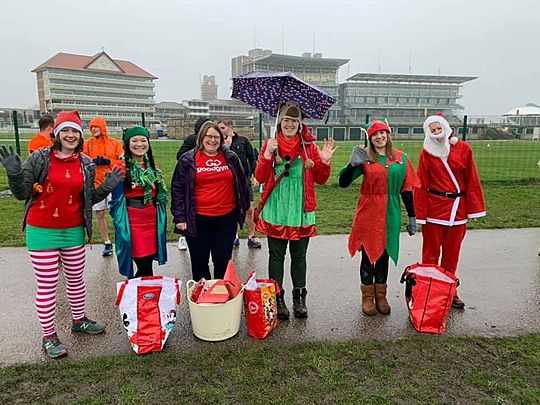 It was really very early on Saturday morning when the Goodgym elves (some of whom might have been a little tired from the previous night's festivities) made their way to the localised boggy cloud formerly known as the Knavesmire. There we met RD David and Santa and were shown our present collecting tubs (sacks aren't known for their waterproofing), where, excitingly some presents were already.. um.. present.

Presently we realised that it was rather too chilly to hang around doing nothing, so being good elves we offered to help set things up. However, being novices I'm not sure quite how much we speeded things up.

How many elves does it take to set up a funnel?

"Helping" done we returned to elfing in time to receive the flurry of presents that were now arriving, and ensure they were carefully sorted into "generically suitable for anyone" and "adults only". Some folks had to think about it for a while, so we were curious as the contents of their contributions. Others were more straightforward:

These are posh chocolates, too nice for children! (Lovely Babs)

With time ticking, elf Leanne and elf Debs headed across the bog to the start line to gather additional gifts where we were met by an excited flock of people... thinking our tubs were for clothing and bags. Being good elves we took them anyway and debated how many coats it was possible to wear at once. Sadly we didn't find out.

With the run underway we returned across the (literal) 'mire to attend to our duties; needless to say the quickest runners beat us there, despite taking the long route. Barely had we assembled our Santa station, then the first runners were back home. Santa had a quick stint funnel-managing to ensure no-one strayed out the side, risking disappearing permanently into the quagmire, or worse, not getting a time.

Meanwhile the moderately moist air had become persistent precipitation and elf Debs was glad of her umbrella, valiantly attempting to keep the buckets of now-dwindling presents dry. It didn't work. But our noble elves cheered on our runners with such encouraging sentiments as "pretend it's sunny" and "you're nearly there!" (they weren't), and were appreciated and thanked by many. Our patrons went away happy, and the now damp and really rather tired elves were rewarded by hot drinks by the lovely Nick and Michael. The way to an elf's heart is clearly via a mountain of squirty cream. Job done we headed home, with the elf that stayed up very late indeed contemplating a return to bed.