A Story Worth Weeding

4 runners ran to help the More 2 Childcare in Greenwich. 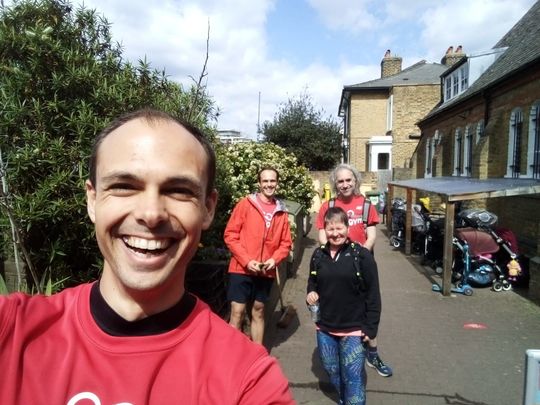 The sight of weeds makes my spirit cry. I believe the official term is spritiusweediusafflicticus. I’ve been a sufferer (and have suffered dearly) my entire life.

Thus, as midday tolled, I was cast to the depths of rotting despair. Weeds, damned weeds, littered the boundaries of More2Nurseries in small chunks of glee. And I heard them whisper to one another, ‘shhhh-uck up that water fellas, I’m feeling th-irrrr-sty!’

I spotted my forehead with a damp handkerchief and leant against the hard brick wall. GoodGymmer and twin brother, Alex, asked if I was okay. I replied: ‘Sadly, I am not. Bring out the gardening gloves, Alex, bring them out.’

I got to work in a furious way, tearing weeds out by their spindly, green necks. Of course, some had buried unscrupulously under paving slabs, which made their good-riddance hard work. But I was not alone. Joining me in the crusade were GoodGymmers, Linda, Julian, and (already mentioned) Alex. We declared war.

As the minutes ticked by, the weeds were sent to eternal damnation in the just pit of the bin liner. All around us, plants and flowers that had lived for so long under the oppression of the weeds, breathed out in great delight and relaxed spectacularly under the midday sun. Before we knew it, they were gone, and Alex and Linda swept away the remnants of conflict.

As evil is brought to an end, so does good take a peek into the daylight. New flowers were brought by staff from More2Nurseries! To welcome them into their new home, Linda and Julian gave them a thorough watering, and they perked up their young petals to say hi, hello, and thank you for ridding us of the evil, awful weed kings.

Unfortunately, weed-slaughtering is time-consuming work, and we had to leave the new flowers in their pots. And so, we shall return (next Tuesday as it happens), and If any weeds are weeding this, steer clear, because Linda, Julian, Alex, and I will be waiting and watching from GoodGym Greenwich HQ.