Helping the largest community owned park in the country! 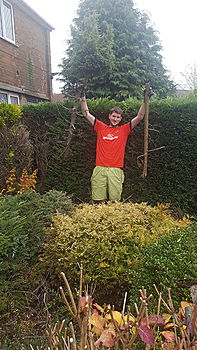 26 runners joined us this week for another session with Sustrans to help clear some of the city's cycle paths.

We had three four runners join us for the first time, Callum, Kate, David and Linda, we hope to see you all again soon!

Everything seemed a little bit the wrong way round on our way to the task, back markers at the front, intervals in the opposite direction to where we were going etc, but the group stuck together nicely and we all arrived together, with some of the more speedy members of the pack having covered and extra bit of ground.

Sustrans Simon was on hand to show us what needed our attention, the Virgin Cycle path, the Round Sheffield Run link section and the Road to Nowhere, we split into three teams and began work. The overgrown vegetation and litter were no match for the teams and the full width of several sections of the path soon became evident.

Once we were finished Simon said thanks, and mentioned that the local business owner had popped by to say thank you too. There were several cyclist and runners using the paths who also expressed their appreciation.

We headed back to base, picking up a couple of Strava segments on the way and stopped off just by the Showroom for a combined fitness and stretch session led by Sarah, a great way to finish off the run and make sure we're ready for the next one...

Delivering leaflets in a Roundabout sort of way

With a bit more of a streamlined team this week due to the sunshine and the Bank Hol weekend we were down on numbers but not on enthusiasm and energy!

We welcomed new runner Rebecca Croft along who came on her first run, give her a CHEER!

This weeks task was with a new charity called Roundabout. Roundabout is Sheffield’s local youth housing charity providing shelter, support and life skills to young people aged 16-24 who are homeless or at risk of homelessness.

We met with Emily from the charity who told us more about the great work that Roundabout were doing and shared with us the evenings plan to deliver as many leaflets as possible around the city to promote the charities Sleep Out event on Friday 8th November 2019 at 92 Burton Road, Kelham Island which gives people the opportunity to support the charity, raise funds and experience first hand what it's like to sleep on the streets on a cold night! You can register here.

We split into 3 teams and headed to a few different areas including Meersbrook and Eccy Road. After a good hour of running and leaflet distribution we returned to base to stretch off and give leftover leaflets to Emily.

Until next time, happy running!

Back to the (Sheffield) Future...

A big GG welcome to new runners to Julia Cobham and Sarah McPherson for attending their first run! Hope you enjoyed it and will be back for more soon!

Hannah was also on her 100th good deed and therefore donned the now customary wings and helmet for the honor.

This week's run was longer than usual and true to Sheff town's wonderful form it was hilly, 20% in some places!

Everyone did a sterling job with regular regroups at the tops of climbs to admire the cities beautiful sights as the sun crested the cities skyline.

This week's task was for Sheffield futures, a fantastic organisation supporting young people. We were helping out this week at Woodthorpe Youth Centre. This week's tasks included:

Everyone got reyt stuck in to the tasks and as the task was a further run we unfortunately had less time than usual on the tasks. We did what we could however which with 30 people on the jobs was still a decent amount!

On route back we threw in some fitness with some step ups and 'Beatles Lunges across the zebra crossing (the cars loved it honest...).

Back at base we stretched off and heard the latest GG happenings past and future.

Until next time, happy running!

Claudia is a now a fully fledged GoodGym runner. They've just run to do good for the first time. They are out there making amazing things happen and getting fit at the same time.

Once again it was time for our regular outing to Heeley Peoples' Park. Thirty-one Good Gym runners were joined by nineteen student visitors from Hong Kong and their chaperones, Serg and Afza, from Sheffield Hallam University. Once we were all gathered at the Showroom there was time for a quick briefing and a group photo before heading south towards Heeley. The group demonstrated a range of paces, but between Harris’s greyhound tendencies at the front and James’s stalwart backmarking, with help from Capable Kat and Long-Distance Dan in between, we reached the Birds’ Nest without losing anyone along the way. Rob, Bev and Frank, our friendly parkies, were waiting with dump bags, gloves, shovels and rakes and implements of destruction. After some health and safety guidance, swift binary fission saw Bev lead one half of the group head off to the Chinese Garden to deal with the dandelions, while Rob led his team into action dealing with sticky willy and other assorted weeds under the Smoke Bushes. With upwards of fifty people in action it took hardly any time to clear the undergrowth, dump bags were filled and taken to the compost heap, the rain held off and soon it was time to make our way back to the city centre for. A small, and probably rather confused, snail was briefly adopted by our guests, who had to be persuaded that ‘No, they couldn’t take it home’. A leisurely trot followed by a stretching session saw the end of possibly our biggest group run to date. Thank you all for coming and welcome to Claudia, Dana and Jacob who were with us for their first time.

Helping the largest community owned park in the country!