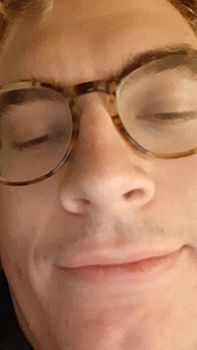 Living on the Edge!

Make no bones about it - it looked like a grave task but it wasn't as turf as it looked!

We kicked off the warm up with the biggest group of the year so far: 23 of us including four new recruits! Welcome to Paul, Daniel, Cassandra and Connor on their first GoodGym run and welcome back for a 2nd run to Philippa. After kicking, squatting and burping for a while, we got on with the warm up. Everyone enjoyed a longer warm up this week, honing in our technique and agility.

Off we ran (and walked) around Surbiton and Kingston and up to Surbiton cemetery. The wheelbarrow squeeking around the pitch black cemetery made for an edgy setting as we picked up the tools and got ready to work. Digging things up in a cemetery may sound like grave task but it wasn't an undertaking. 23 of us made light work of edging and removing turf from the paths and we cleared a path in no time.

Back we ran to the Guildhall - stopping on the way back for an obligatory photo in front of the iconic leaning phone boxes of Kingston, before we dialed up the pace for the final leg. Then back for stretches.

Super effort to all

In the news tonight we mentioned a few things but one we need to think on was the message about reducing the risk of Coronavirus spreading so here is the link to GG's tips on the matter https://www.goodgym.org/stories/coronavirus-information-for-goodgym-activities

The paths at Surbiton cemetery are closing in making it difficult for some to access (especially those in wheel chairs) areas where loved ones are laid to rest so we have started some great work clearing the way for all.

Don't be scared ... yes it is physical and perhaps the muscles will feel a little stiff the next day but that's what we do right !! PLUS it is super therapeutic, mindful, great for fitness and we are doing much GOOD

So let's meet at Guildhall 6.45pm and dig in for the community

Not DUST SKIRTING Around the Issue

It may have been cold and the traffic may have been gridlocked but that didn’t stop 14 keeno GoodGymers getting together on this wintery night in South London.

A brisk warm up from Mark helped get the blood pumping on such an icy evening. After much lunging and fast-paced stalker-walking, we primed our Stravas and were on our way through the streets of Kingston town to our task. We were off to help out the awesome KCAH (Kingston Churches Action on Homelessness) who offer so much in our community for the homeless. The task was to give the offices a good spruce up. The centre that once housed the Joel Project now runs a morning session named 'The Pathway' where those that need it can find some warmth, shelter and breakfast on these cold winter mornings.

After three icy kilometres through the back streets, we were thankful to be in the warmth ourselves and undertaking an indoor task this week. All set to get into our task and clean KCAH’s offices so after a brief introduction from the KCAH team, we split into groups and set to it. Cleaning windows, desks, computers, board rooms, kitchens, skirting boards... no task was too big or small for team GG. We even scrubbed at the mysterious stains left by some ominously “explosive” old army boots that were donated to the charity.

When I'm cleaning windows 🎧🎤🎼….with GoodGym!
Come and have some fun, do good and get fit! #goodgym #kingston #KCAH #volunteering #doinggood #cleaning #running #fitness pic.twitter.com/kQajqhSaRU

It’s amazing how quickly some of these tasks seem to take – one minute we were setting to it and then half an hour disappeared and we were gathering to head back to the Guildhall. We had a chance for the essential team photo before donning the gloves again and departing, leaving behind some very grateful KCAH employees and a much cleaner and fresher office space.

Welcome back for a second run at Kingston to Susi, Graham, Claire and Leticia - Great work all!

See you next week.

Helping the mighty KCAH with all the Good they do

Tue 21 Jan 18:45 pm
Map
Guildhall, Kingston-upon-Thames, London, KT1 1EU
Sign up now
Improve the service this charity offer to so many reliant on a place to stay in the winter

Details have been confirmed and they would like us to assist at the Joel Project’s building where they run a morning centre called The Pathway, it needs a good clean and spruce up.

We were having a ball with the spray, rattle and roll!

Goodgym runners were cancelling other appointments to take part in this task tonight! They were strapping on their already mud filled trainers, zipping up their many layers and preparing their waterproofs to meet their challenger....and no , it wasnt blustery Brendan... it was the soft play ball pit!!

15 runners came together to help their local community; and it wasnt just us long in the tooth GG runners that braved the gail force winds and unforgiving showers to meet at Guildhall for a 5km run and to do some good, but 3 sparkling new runners felt pulled by good will despite the promise of soggy trainers , a huge welcome to Susi, Graham and Claire (if you can run in tonights weather, you can do anything!)

With Jo and Laura leading the way as our walking group we headed along the river to the YMCA Hawker Centre where we met Ciaran who divided us into two groups...the apparatus and the ball pit.

Who thought cleaning lots and lots and lots of tiny balls could be so much fun! #softplay #ballpond #ballpit #ymcahawker #ymca #kingston #gooddeed #volunteering #runtodogood pic.twitter.com/4lOHx3y89f

The YMCA centre puts on many sports and fitness activities for the community including the incredibly fun soft play area for kids (or adults, I'm not judging) which includes a ball pit. This ball pit needed a good clean, so one team set to work removing all of the balls from the pit, cleaning them with a good rattle around in disinfectant spray and the putting them back in the ball pit looking all shiny and new...while the other team got to work cleaning the soft play apparatus , so channeling our inner 5 year old we weaved in and out with joy as we wiped and dusted, using the slide as our mode of transport from one section to another.

Last night we shook things up! Come along to GoodGym Kingston every Tuesday, 6.45pm at Main Guildhall building and you can too#goodgym #kingston #runninggroup #volunteering #ymcahawkercentre #ymca #doinggood pic.twitter.com/vB6rGUGnRv

We then regrouped to put all the clean balls back in the pit ready for the kids and of course our group photo!

How much fun can you have at GoodGym? This much fun!!!! #runninggroup #volunteering #exercise #running #getfitdogood #kingston #tuesdays pic.twitter.com/yf5LW1tlxU

Don't forget we have a Starter Run this Sunday, sign up here

Helping at the YMCA

Calm down, calm down now .... Actually WHHHOOAAAA YES!! We get to do the task where we can be big kids and DO lots of GOOD at the same time!!

Yep we are running to the YMCA Hawker Centre to help them clean up the Soft play area ....likely to be Ball Pond action too!!

Tom is part of a crowd that's making a huge noise. Tom has been cheered by 25 people - that's a round of applause just on their own. We hope they keep it up.

12 elves met at Guildhall for the final GG Kingston run of the year.

The elves raced santas hat, with Rhian remembering it was Rudolph pulling santas sleigh on a foggy night (much to the delight of everyone else who could finally stop planking!)

After the elves had braved the wintry conditions of Kingston, they arrived at the Grow Baby workshop, where there was just 30 minutes to work their magic.

Growbaby is such a giving charity in our community who since 2003 have been doing so much in the community, donating clothes to families with babies and younger children that are in need. The giving does not stop there as they serve the community in far more ways too so if you would like to know more then check out https://www.kingstonvineyard.co.uk/growbaby/

Spurred on by the glasses of bubbly, they got to work folding mountains of generously donated clothes and sorting into age groups.

As well as sorting baby clothes we were also tasked with cleaning duties and after an initial attempt to clean the windows only made them foggier than a cold december night that not even Rudolph could navigate, we changed our methods leaving them crystal clear.

Armed with brooms, dustpans and henry, we sweeped into action for the final job to leave the hub spick and span.

We ran, we sorted, we wiped, we swept and we cheered! It was great!

All in all to round off a great year of GoodGym tonight was a thoroughly heart warming task with Grow Baby followed by a good warming drink or two...

On the 12th day of Christmas my goodgym gave to me.... 12 runners running , 1 walker walking and a mince pie dunked in beer!

Ho-ho-hope you all have a very merry Christmas. See you next decade!

Report written by everyone, ignore the line below

Helping the mighty KCAH with all the Good they do

Helping at the YMCA