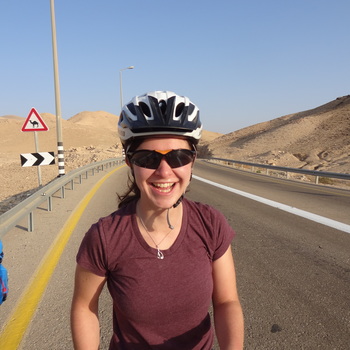 Sarah Hunt signed up to a group run
Group run

We were all expecting the worst that the weather could chuck at us today as we all arrived in our rain jackets. As Roz, Sarah and I chatted we heard a rustling coming down the lane shortly followed by something flying towards us. Was it a bird? Was it a plane? No, it was Zdeni wearing a big plastic poncho that apparently she'd had since school camp 20 years ago (must have looked huge on her then!), which was so cool that it even had poppers to make wings! Top poncho!

The van showed up, a guy came and opened up the church and so we did what we do best and quickly shifted the duvets and mattresses into a room in the church to give some more homeless people somewhere safe and warm to sleep tonight. Sorted!

Another mattress and duvet shifting community mission in the bag. Our full compliment of six arrived in good time and waited patiently for the van, catching up on life, GoodGym and running while we waited and chatting with the shelter volunteers who reported that they'd had a successful event the previous week, housing 8 homeless people for the night.

They'd also had the good sense to keep a parking space available for the van with traffic cones which also caused one parent arriving to drop of the kids for a dance class to just park their car in the middle of the road and cause a wee traffic disruption.

Then the van arrived and we got our shift on armed with duvets and mattress which were moved inside and onto the stage in the hall in no time at all. Pulling the curtains to provide some cover and discourage the young dancers from having a kip half way through their class, we were done and headed off into the weekend.

Bristol Churches Winter Night Shelter runs from January to March. Each night, the shelter is based in a different church in central Bristol so the mattresses must be moved to each new location every morning.

We will receive the mattresses from the van and move them into the new church to set up for the night's shelter. Today we will be moving them into St Agnes Church in St Pauls.

This is a Community Mission, so you should make your own way to and from the task.

Bristol Churches Winter Night Shelter runs from January to March. Each night, the shelter is based in a different church in central Bristol so the mattresses must be moved to each new location every morning.

We will receive the mattresses from the van and move them into the new church to set up for the night's shelter. Today we will be moving them into Horfield Methodist Church.

This is a Community Mission, so you should make your own way to and from the task.

Going Above and Beyond

When they signed up to help with leafleting and gardening and cleaning tonight, none of the runners quite knew what was in store!

The group were splitting into two tonight to help Above and Beyond and Hotwells and Redcliffe Development Group. After warming up, the leafleting crew bounded off towards St Michael's Hill. Bounding soon turned to jogging as we started the long climb over to Redland, but the group had incredible stamina and everyone got to the top looking fresh.

When we arrived in Redland, the group split into four teams for the leafleting competition (much to Alice's disappointment). Each team was allocated a different area to leaflet, a time-cap, and a shred of competition to be the first team back. Gary, Patrick, Kait and Chris flew back, breaking what must be a record of delivering 60 leaflets in just 9 minutes. The second team were hot on their heels, coming in with 10 minutes left on the clock. While the other two teams were nowhere to be seen, the first two showed-off just how they had got so quick by practicing hill sprints, before being joined by the third team for the chair-lunge relay. Perfectly timed for the end of the fitness and the end of the time-cap, the final team returned back. 250 leaflets lighter!

Meanwhile, Maria wonderfully led the other half of the group over to Redcliffe where we were due to be helping Hotwells and Redcliffe Development Group with gardening and cleaning at Faithspace. As the cleaners got to work, the gardeners were distracted by a woman who had lost her children. With a much more important task on their hands, over the next hour the team then assisted the local community and police in delivering the children back to safety.

The groups returned to base to recount their tales and be grateful that the incident had a happy ending. Welcome to Nathalie who joined us for the first time tonight, come back for a more by-the-book GoodGym soon!

Hoping we can regularly help, who fancies helping out at Eastville junior parkrun? It's fantastic to see the 4-14 year olds taking on the 2k course on a Sunday morning. We'll work out where our coffee warm-up is afterwards :-)

You'll get training for each of the roles, so there's nothing to worry about if you've not helped out before.

You need to email eastville-juniorshelpers@parkrun.com with your parkrun athlete number from your barcode (you can sign up here if you're not already registered with parkrun).

And can check out the future roster here: www.parkrun.org.uk/eastville-juniors/futureroster/

Sarah Hunt has has earned their community cape by completing their first community mission. Sat 16 Feb 2019

Sarah completed a community mission. Instead of watching TV or lying in bed, Sarah was out there making their community a better place to be. For making that choice they have earned the community cape.

This Saturday's task was at Novers Hill to help Julie and her team clear back more undergrowth and give the place a good ol' fashioned GG litter pick. A uber keen cutting crew went straight to the scythes with David S leading the way. Others took on the brambles and bushes clearing ground to keep the area accessible. Sarah H went on a solo mission to litter pick the bottom of the hill (because she wanted to climb it again obviously!) And towards the end Mel made it her mission to clear out a grate of all its muck and litter, but in the end she was drained by the whole exercise as Mr Grabbyhands just wasn't the right tool for the job. It would have taken more grabs than you would see at a toy picker machine full of large packets of Walkers crisps with unlimited credits on Weston Pier during half term when the cafe is closed unexpectedly. Next time we'll know to shovel we've got into it. Other jobs done, bushels of cleared growth launched in a neat pile, it was time for tea and cake. A Nover Hill of a spread as always from our wonderful host. Thanks to all for coming along and to the guy's who setup their own run from the Mud Dock we salute you.