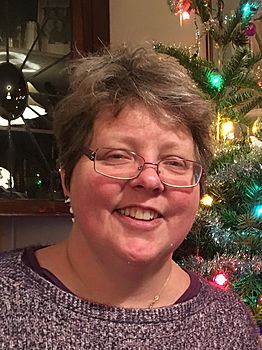 Special delivery on Odd Down

After 18 months of GoodGym delivering ‘Roasts on the Road’ to isolated and vulnerable people in Odd Down, today the group was back enjoying a sit down meal at St Philip and St James Church.

GoodGymmers Richard and Ruth still took a handful of dinners out to housebound members and were invited back to tuck in to a roast dinner as a thank you for the charity’s contribution during lockdown. Only Ruth took them up on the offer - Richard missed out on some delicious roasties and apple pie.

It was a bit emotional in the church hall as the vicar expressed his thanks for the team’s help but a cup of tea rounded it off nicely.

Please pass on that thanks to all GoodGymmers who stepped in to brighten up Odd Downers’ Sundays over such difficult months.

It is with great excitement that I can announce that we plan to reconvene monthly (second Sunday) ‘One 2 One’ meals in the church starting on 12th September. We will also maintain a small ‘Roast on the Road’ delivery service to those house-bound members of the community that we have connected with during the Covid lock down period.

The Church really want to acknowledge all the effort volunteers have put in over the last 16 month delivering meals and as such I would like to invite Goodgym to;

Join the church congregation at 12:30 after the service for a drink Help set up tables Deliver a few (think no more than 4) local meals Help serve lunch at 1 pm and stay for lunch

Wow, Ruth has completed a 12 month mission streak. That means they've cleared gardens, moved furniture and changed light bulbs in spring, summer, autumn and even winter. Show your support and give them a massive cheer!

Core Blimey!! We Picked a Good One

GoodGym rocked up at the Bath Organic Garden in wonderful Victoria Park on Saturday morning to help sort the good apples from the bad.

There was a particular crop of apple trees, those growing the 'Beauty of Bath' variety, that had reached the point of requiring some harvesting and Cosmo, Ruth and Meyrick were on hand to make a start.

Now the good apples are the ones that fall from the tree, not the ones still growing, so for the first hour we picked the good apples from the floor for collection. Let's not forget that even the bad ones that had been on the ground for too long also have a purpose and we piled these up for composting. Once we'd collected as many as we could, we shook the branches to allow more to fall and collected them as well. (GoodGym T-Shirts turn into a handy pouch for fruit collecting did anyone even know that?)

So efficient were we that we moved onto a second tree, which we were given the responsibility of identifying (we were correct!).

After a good hour we had enough in our containers to start turning the fruits of our labour into juice for drinking.

An incredibly efficient production line developed with Ruth cleaning the apples, Cosmo and Meyrick quartering them and then all three getting in on the mashing/shredding action to reduce them to smaller bits. Finally we ended up with an apple press two thirds full and we all turned the bar to drive the press down, this was the exciting bit!

As time ran out we had enough juice to enjoy some ourselves, and even took some home. There are pleny of apples from our harvest left though, and plenty more to be collected in a future GoodGym Mission!

Working in the orchard at the Organic garden in Bath

Mixture of tasks which could include:

Roasts on the road.

4 GoodGymers met at the church to help deliver roast meals for people in the local community. The meals had been freshly cooked on site. We have been doing this task regularly since lock down but as restrictions end this will be the last time. Next month the meals will be served on site allowing everyone much needed social contact.

Delivering roast meals in Odd Down

Meet outside the church of St Philip and St James in Odd down. You will be given approximately 4 meals to deliver in the local area. Each address is within a 10 minute walk of the church.

These meals are lovingly cooked by the church and are usually served in the church but due to lockdown they need volunteer help to deliver these meals to their community.

A step (or 4) in the right direction

We were back again at St Martins Garden school to continue transforming a previously neglected area of land into a garden school. Andy, the organiser, had high expectations for the group - clearing a patch of scrubby land for a new wooden teepee and installing some steps on a slope leading to the garden school area.

We divided into two teams: Andy, Emily and Rachel tackling the steps, whilst Mary, Ruth, Sam and Max fought their way to the scrubland.

The steps team soon got into a rhythm - sawing a large sleeper in two with a slightly inadequate bow saw, digging a channel in the earth with a slightly scary mattock, hammering rebar rods in place with Andy's brand new sledge hammer and finally backfilling with soil to make the step even. Hard work but the end result was very satisfying with a neat set of 4 steps leading down to the garden school area.

Meanwhile the clearing team had been attacking the tall shrubs with loppers, and digging up roots, clearing the plot so that a barrier membrane can be laid down in anticipation of a new wooden teepee for the kids to use. Again, a big difference in a short space of time.

Working in the orchard at the Organic garden in Bath

The entrance is near the children's play area. Head up the driveway through the stone pillars and farm style gate.

Delivering roast meals in Odd Down