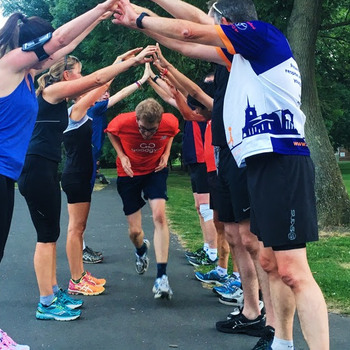 This week we were back at St John Church Hall for the first time this year. We met up just at the entrance where we were given our various tasks by Stephen.

Kirk and Russell D were first tasked with breaking down some rather large fallen branches to get them in to one of the brown bins which took no time at all.

Rachel and Caroline joined Stephen with repainting the kitchen, something which we originally did about two years ago, but it needed a bit of a fresh coat after some new cupboards were recently installed.

Russell D put his body on the line to destroy the brambles behind the hall and pull them out from the roots. Taking a few scrapes to his bare legs, he looked like he’d just done a round of the Barkley Marathons. Toby raked the fallen brambles into the clearing, where Joel, Lucy and Kirk broke them down and put them in the brown bin. There was talk of climbing in the bin to compact all the plant matter, which was doing my anxiety no favours!! Thankfully though, Kirk used this as an opportunity to release some stress and knocked it all down with his rake instead, whew.

Thanking Joel for the pun, it really was a great effort by everyone and we finished the jobs in no time at all. Showing yet more of that wonderful GoodGym spirit, Toby and Kirk even took the brown bins back to the church as we said our goodbyes. Thanks for coming everyone, see you all again soon!!

Doing a bit of maintenance at St John Church Hall

Roughly two years ago, we painted the kitchen at St John Church Hall, it needs a bit of a touch up as the cupboards have been replaced. Due to this being indoors in a small area two people can do the painting, please bring facemasks.

There are also some brambles that need cutting back, which as it's outdoors can accommodate a few more people so six people can do this.

If you have a preference of which task you'd like to do just write in the comments or send me a message/email.

Ruff Around The Edges

The 23rd June was meant to be our first Group Run for well over a year. But as ‘freedom day’ was delayed so was the return of our beloved Group Runs. Thankfully the task we had set up could still go ahead as a Community Mission instead. And so for the first time since the pandemic began we returned to Interact, the place where GoodGym Chelmsford started almost 5 years ago.

We met up with Susie who gave us a low down on what Interact does and some of the programmes they are running at the moment. Susie also bought along her lovely dog Winnie to say hi to the group. She wasn’t a distraction at all! 😍

Our task was to clear the garden paths of any weeds that had been growing. We got some gloves, hand trowels and forks and made sure we spread out to get to work. Anna and Lucy focussed on the path around the back while the rest of us paid attention to the front, Toby made very impressive progress on his patch. We managed to clear quite a large amount of the paths in the time we had. Emptying our buckets into the compost bin it was over all too soon. Before saying our goodbyes we had a few refreshments (well it would have been rude not to) and went on our separate ways home.

It was lovely to finally be back at Interact and doing some work in the gorgeous Aspire Garden, hopefully it won’t be so long before our next visit!!

Helping out at the Interact garden

Back to where GoodGym Chelmsford first began!!

The Interact Aspire Garden needs a bit of maintenance to look it's best, sounds like a job for GoodGym!!

As some people won't know where to go we'll meet up in the B&M car park at 6:45pm before heading down.

Service users may be about so Interact have asked if anyone coming can make sure they bring a facemask with them.

Doing a bit of maintenance at St John Church Hall

Helping out at the Interact garden